Marina Ovsyannikova, a former editor at a Russian state TV channel who held up an anti-war poster during a live news broadcast in March, was briefly detained in Moscow on Sunday, her lawyer Dmitry Zakhvatov told CNN on Monday.

Police detained Ovsyannikova for “actions aimed at discrediting the Russian army” after she recorded a video statement on Wednesday, according to Zakhvatov.

According to the photos she shared on her Telegram channel, she held a poster saying, “Putin is a killer. His soldiers are fascists. 352 children died. How many more children have to die for you to stop?”

Read here about her past protest with an anti-war poster during a live broadcast on Russian state TV.

Russian President Vladimir Putin has acknowledged Moscow faces “colossal” difficulties in accessing high-tech goods due to Western sanctions, but said it was impossible to cut off his country from the world economy.

“They are trying to set up barriers to restrain our development. Clearly, this is a huge challenge for our country,” Putin told a cabinet meeting on Monday.

“Not only are we not going to give up or — as some of our 'well-wishers' predict — regress to a few decades ago," he said. “On the contrary, realizing the colossal amount of difficulties that we face, we will intensively and competently look for new solutions."

The Russian president went on to say attempts to cut off his country from the rest of the world were “impossible.”

“It is clear that we cannot develop in isolation from the whole world. But we won't,” he said. “In the modern world, it is impossible to ... put up a huge fence. It's just impossible!”

The battle for eastern and southern Ukraine is enduring as Ukrainian forces push back against Russian offensives in Donetsk and Mariupol.

Zelensky suspends top officials and names interims: Ukrainian President Volodymyr Zelensky has suspended, not fired his Prosecutor General and the head of the Security Service to prevent their interference in the investigations of some people in their departments, according to the deputy head of the Office of the President of Ukraine, Andrii Smyrnov. Talking to Ukrainian television on Monday, Smyrnov said Ukraine identifies enemy “collaborators in these law enforcement agencies every week.” In separate presidential decrees issued on Monday, Zelensky named the first deputy head of the Secret Service, Vasyl Maliuk, to temporarily replace Ivan Bakanov, and Ukraine’s deputy prosecutor general, Oleksii Symonenko, to lead in Iryna Venediktova’s stead.

Foreign ministers’ meeting: At the European Foreign Ministers’ meeting in Brussels, the focus is on Ukraine. Ahead of the meeting, the EU foreign policy chief Josep Borrell on Monday said that they will not “stop supporting Ukraine and putting sanctions on Russia.” Ukraine’s foreign minister Dmytro Kuleba tweeted the main points of his message to the EU: “weapons to Ukraine, sanctions on Russia, and accountability for Russia are the three ways to restore peace, enhance security, and protect stability in Europe.”

Battle for the South: Ukrainian officials say a steady flow of Russian military equipment is moving westward from Mariupol toward other parts of southern Ukraine, where Ukrainian forces are on the offensive. A convoy of up to 100 units of military equipment passed through Mariupol in the direction of Zaporizhzhia on Saturday, according to Ukrainian officials. Some independent analysts believe this is to support Russian forces in Kherson that have come under attack from Ukrainian long-range weapons. Towns in Donetsk have been under constant shelling in Russia's attempt for control. On Monday, a Ukrainian official said that a two-story building in Toretsk was hit, from which "the rescue service found and recovered the bodies of 5 dead people."

Ukrainian defense: Ukraine has struck two warehouses in Russian-occupied territory — one in Chulakivka late on Sunday and another in Raiske in the early hours of Monday morning, the adviser to the head of Kherson’s military administration, Serhii Khlan, told CNN. The Ukrainian military said Russian forces are also trying to eliminate its defensive positions in Donetsk, with the town of Siversk their immediate priority, but they appear to be defending terrain further west with tenacity — despite superior Russian firepower. 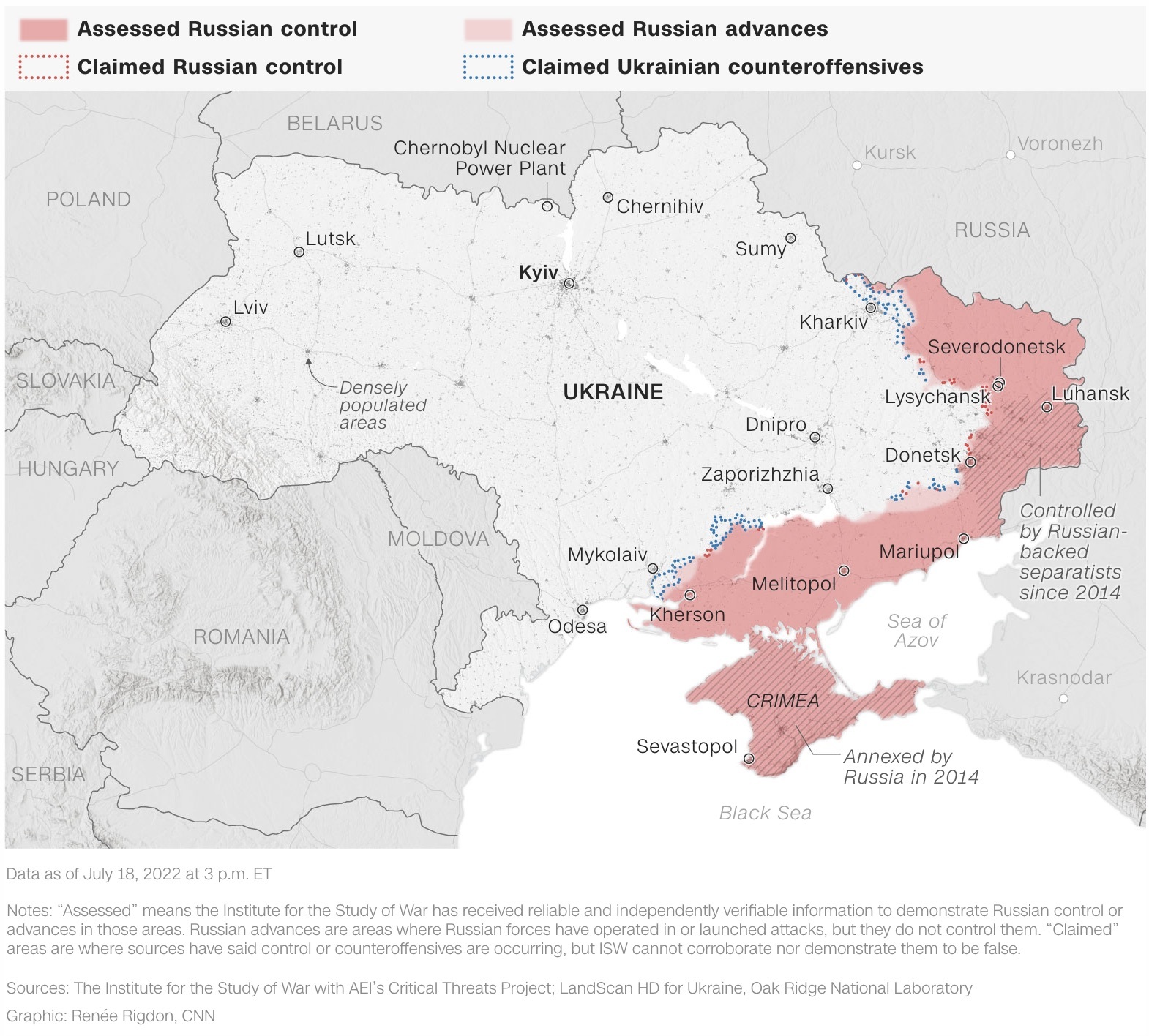 Ukraine's Interior Ministry says a two-story building in the town of Toretsk was hit early Monday, as Russian forces intensify the shelling of Ukrainian defenses in Donetsk region.

"The rescue service found and recovered the bodies of 5 dead people," the ministry said. "Three people were rescued from the rubble, 1 of whom died in the hospital."

Toretsk and surrounding towns have frequently come under fire from Russian lines to the south.

Some context: Ukraine's military said on Monday that it had repulsed Russian attempts to advance in Donetsk.

The General Staff said that north of the city of Sloviansk more than ten settlements had come under fire.

Russians continue to shell areas along the border of the Luhansk and Donetsk regions and to persist with a ground assault to the east of the city of Lysychansk, which they took last month.

Little territory has changed hands in Donbas since the fall of Lysychansk as Ukrainian forces have adopted new defensive positions.

Ukraine's foreign minister has called on the European Union to send additional weapons to his country and to impose additional sanctions on Russia.

“Today, I addressed EU ministers at the Foreign Affairs Council,” Dmytro Kuleba tweeted on Monday. "My key message: weapons to Ukraine, sanctions on Russia, and accountability for Russia are the three ways to restore peace, enhance security, and protect stability in Europe

“I encourage EU states to support the Special Tribunal for the Crime of Aggression Against Ukraine,” Kuleba wrote.

Ukrainian President Volodymyr Zelensky has named the temporary heads of the country’s intelligence agency and prosecutor’s office, while the current leadership is suspended pending an investigation into the two departments.

The head of the Ukrainian intelligence agency Security Service of Ukraine (SBU), Ivan Bakanov, and the country’s Prosecutor General, Iryna Venediktova, have not been dismissed from their posts, but instead suspended while an investigation is carried out, according to a senior member of Ukrainian President Volodymyr Zelensky’s administration

The pair were suspended to guarantee they would not interfere in the investigation of some of the people working in each of their departments, the official said.

“We have been waiting for more concrete and sufficiently radical results from the leaders of these two departments, to clean these two departments of collaborators and state traitors," Andrii Smyrnov, the deputy head of the Office of the President of Ukraine, told Ukrainian television on Monday.

"However, in the sixth month of the war, we continue to find ... packs of these people, in each of these departments,” he added.

Smyrnov said the move was aimed at preventing "the potential influence of these two officials on the criminal proceedings that are being investigated regarding ... employees."

Based on the results of official inspections and investigations, Smyrnov said Zelensky will decide whether or not to submit a motion to parliament to dismiss the prosecutor general, and the head of the Security Service of Ukraine.

Some context: In his nightly video address on Sunday, Zelensky announced that he had taken the "decision to remove the Prosecutor General from office and to dismiss the Head of the Security Service of Ukraine," adding that more that 60 employees in both offices were suspected of treason.

Russia has to de-block and allow Ukrainian grain to be exported," Borrell told reporters ahead of a European Foreign Ministers' meeting in Brussels.

What will they talk about? The meeting will focus on Ukraine. Kyiv's Foreign Minister Dmytro Kuleba is expected to join the meeting and report on the situation on the ground.

Ministers will discuss how to better implement sanctions against Russia and increase military support for Ukraine, Borrell said.

Gas supply: On Wednesday, the EU Commission will discuss gas supply and the bloc's reliance on Russian energy.

"We are not going to stop supporting Ukraine and putting sanctions on Russia," Borrell said.

"Certainly there is a risk to our energy supply. Everybody knows (that)," Borrell said.

He added that the EU Commission and Council were prepared to face "any possible situation."

Serhii Khlan, an adviser to the head of the Kherson civil-military administration, told CNN that two warehouses in Russian-occupied territory had been struck – one in Chulakivka at 11pm local time Sunday and the other in Raiske near Nova Kakhovk at 5am local time Monday. He said detonations had continued for several hours In Raiske.

Social media video showed a large plume of smoke rising over the river.

Some context: Ukrainian forces had previously targeted a large warehouse said to contain Russian munitions in Nova Kakhovka, setting off multiple detonations and sending a huge fireball into the sky.

The arrival of high-precision long-range artillery and rocket systems from western allies has allowed Ukrainian forces to target Russian supply lines and storage sites far behind the front lines.