“This has significantly slowed down the Russia advance and dramatically decreased the intensity of their artillery shelling," Reznikov said in a video address to US thinktank the Atlantic Council.

“We are grateful to our partners for HIMARS and… M270,” he said, referring to the M270 Multiple Launch Rocket Systems (MLRS) that the UK has committed to providing Ukraine.

“To effectively hold back the enemy, we need at least 50 such systems, given that our frontline is almost 2,500 kilometres (1,553 miles),” he added. “For an effective counteroffensive we would need at least a 100, I think. That could become a game changer on the battle field in that case.”

Over the past few weeks, Ukraine has been using the HIMARS and other Western-made weaponry to target Russian ammunition depots in Moscow-controlled territory. Rockets launched from HIMARS damaged a key bridge crossing the Dnieper river in the Kherson region Wednesday, TASS reported.

Reznikov called for Ukraine’s allies to test more of their equipment in the country.

“Ukraine is now essentially a testing ground,” he said. “Many weapons are now getting tested in the field in the real conditions of the battle against the Russian army…We are interested in testing modern systems in the fight against the enemy, and we are inviting arms manufacturers to test their new products here.

“I think for our partners in Poland, in the United States, France or Germany, it’s a good chance to test their equipment. Or our Turkey partners,” he said. “Give us the tools, we will finish the job.” 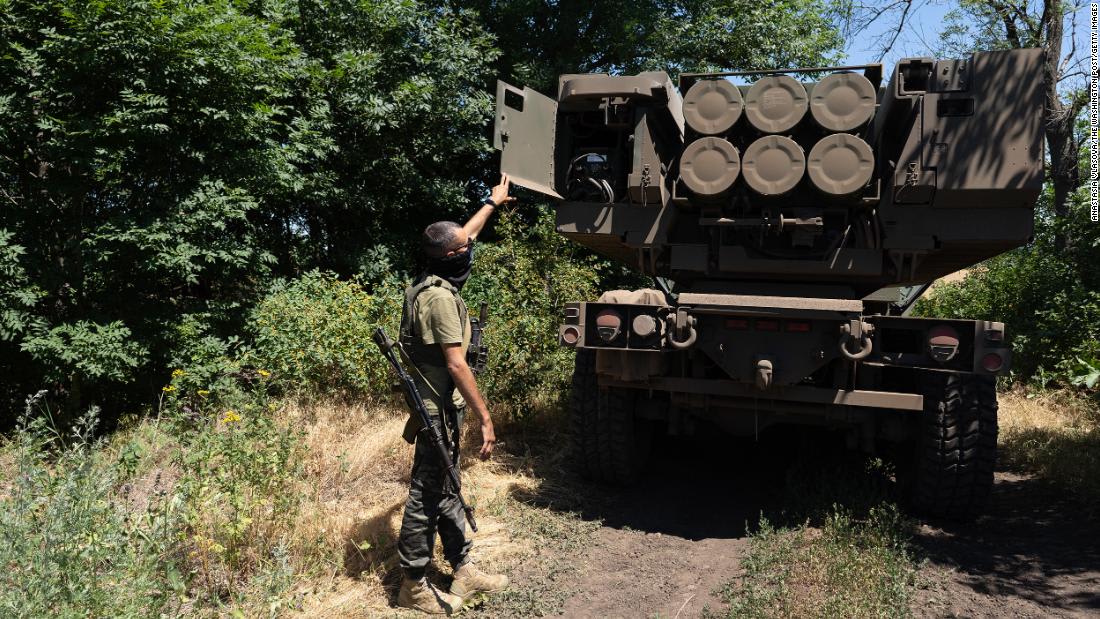 Ukraine's new US rockets are causing fresh problems for Russia

The news follows Ukrainian President Volodymyr Zelensky's announcement that his government was cutting diplomatic relations with Syria in June.

“The Syrian Arab Republic has decided to break diplomatic relations with Ukraine in conformity with the principle of reciprocity and in response to the decision of the Ukrainian government,” state news agency SANA reported, quoting an unnamed official at the Ministry of Foreign Affairs and Expatriates.

Zelensky announced the severing of diplomatic ties with President Bashar al-Assad’s government after Damascus recognized the independence of the two Russian-backed separatist republics of Donetsk and Luhansk, located in the Donbas region in eastern Ukraine.

Syria was the first country, after its close ally Russia, to recognize the independence of the breakaway regions and state its intention to build diplomatic relations with them last month.

The Syrian government has relied on Russian support for over a decade, with Moscow shielding the country in the Security Council and flooding it with weapons, personnel, and operational support.

Russia began a military operation in Syria to prop up the Assad regime six years before its invasion of Ukraine.

In 2018, Assad’s government recognized two other Russian-backed separatist republics, Abkhazia and South Ossetia, which are internationally recognized as part of Georgia.

A 13-year-old boy was among three victims of a Russian attack on the northeastern city of Kharkiv on Wednesday morning, said Oleh Synehubov, head of the regional military administration.

“Unfortunately, 3 people, including a 13-year-old boy, a man, and a woman, were killed as a result of the morning shelling by the occupiers of the Saltivskyi district of Kharkiv," he wrote in a Telegram post. "A 72-year-old woman was injured.”

Synehubov advised people in Kharkiv -- Ukraine's second-largest city before the start of Russia's invasion -- not to go outside unless necessary.

A bridge to the largely Russian-occupied Kherson region in southern Ukraine has been shelled by Ukrainian forces for two days in a row, according to Russian state news agency TASS.

Stremousov told TASS the bridge was "very badly damaged" in the shelling, but said there is no danger of it collapsing.

On Tuesday, videos shared on social media already showed damage to the bridge.

According to the UK Ministry of Defence, the bridge is a "key vulnerability for Russian forces," as it is one of only two crossing points over the Dnieper River, which Russia can use to supply or withdraw their forces "in the territory it has occupied west of the river."

"This area includes the city of Kherson, which is politically and symbolically important for Russia. The lower reaches of the Dnieper present a natural barrier, with the waterway typically around 1000m wide. Control of Dnieper crossings is likely to become a key factor in the outcome of fighting in the region," the UK ministry said in a tweet.

Two people died and nine others were injured following Russian shelling of a residential area of Nikopol in southern Ukraine late on Tuesday, according to Sergey Bratchuk, spokesman for the Odesa regional administration.

Four of the injured are children, he said, adding that the shelling destroyed three houses and damaged 12 other homes.

Russian forces are renewing efforts to break through Ukrainian defenses in eastern Ukraine and stepping up missile strikes in the south of the country. Meanwhile, Ukraine's first lady is on a high-profile trip to the United States.

Russia is forming plans to annex more parts of Ukraine, repeating a playbook it used in the 2014 annexation of Crimea to seize territory, the White House said Tuesday.

The steps Russia is planning could include "sham" referenda, installing illegitimate proxy officials, establishing the Russian Ruble as the official currency and forcing Ukrainian citizens to apply for Russian citizenship, said John Kirby, the communications coordinator at the National Security Council.

Kirby warned the US would punish Russia with additional sanctions for attempts to further annex Ukrainian territory, and said the White House would unveil additional security assistance to Ukraine later this week. He cited US intelligence that had been downgraded and approved for public release to make the claims about Russia's plans.

"Russia is beginning to roll out a version of what you could call an annexation playbook, very similar to the one we saw in 2014," Kirby told reporters at the White House. He said the potential referenda could take place soon.
"The Kremlin has not disclosed the timeline for the referenda, but Russian proxies in these territories claim they will take place later this year, possibly in conjunction with Russia's September regional elections," Kirby said, listing the regions of Kherson and Zaporizhzhia, along with the Donetsk and Luhansk Oblasts, as likely targets of Russia's annexation plans.

The US and its Western allies have sought to turn around momentum in Ukraine as Russia makes incremental gains in the western part of the country. Biden has approved billions in arms shipments and other security assistance and applied several rounds of sanctions on Moscow.

She said a top priority of her office was working on the problems of state treason and collaborators and her office had been very open about It.

When Venediktova was asked what the real justification was for her dismissal, she said, “You know that my chair, it is political chair and I was 16th Ukrainian prosecutor during 30 years. It is realpolitik in Ukraine. This is my answer.”

When pressed on the real reasons why Zelensky had decided to dismiss her, Venediktova made it clear she doesn’t want to debate it in public because Russia will exploit it. “President now, its chief of command. He understands his strategy and tactic. And he makes his decision with his views,” Venediktova said.

Russian President Vladimir Putin arrived in Iran on Tuesday for his first international trip beyond the borders of the former Soviet Union since launching his invasion of Ukraine, which effectively ruptured ties with the West.

"I am very pleased to be on the hospitable Iranian soil ... We can boast about record figures in terms of trade growth," said Putin in a bilateral meeting with Raisi. "We are strengthening our cooperation on international security issues, making a significant contribution to the settlement of the Syrian conflict."

Raisi also hailed a "significant" commitment to security cooperation between Iran and Russia, saying the two countries had "good experience" in fighting terrorism.

"World events show Iran and Russia's need for increasing mutual cooperation," he said in a statement.

Referring to Putin's war in Ukraine, Khamenei also said the expansion of Western security alliance NATO had to be "stopped."

"NATO is a dangerous entity. The West is totally opposed to a strong, independent Russia. If the way is opened for NATO, it will recognize no limits," Khamenei said. "If it hadn't been stopped in Ukraine, it would have later started a similar war in Crimea."