The chief of Britain’s foreign intelligence service believes that Russia has lost its ability to spy in Europe “by half,” following the expulsion of more than 400 Russian intelligence officers from cities across Europe and the arrest of several deep-cover spies posing as civilians.

“And we reckon, in the UK, that has probably reduced their ability to do their business to spy for Russia in Europe by half,” Moore said.

A number of “illegals,” or Russian spies operating under deep cover and masquerading as ordinary civilians, have also been exposed and arrested in recent months, he added.

Asked whether the war in Ukraine has made Russia a “target-rich environment” for the UK and its allies to recruit potential assets, Moore would only say that “it is our hope” that Russians in the intelligence and diplomatic services will “reflect on what they are witnessing in Ukraine” and decide to “strike back against the system” as many did during the Prague Spring in 1968.

“Our door is always open,” he said.

The European Union further tightened sanctions against Russia over its invasion of Ukraine by adopting additional measures on Thursday, the European Council announced in a press release.

The new measures, which the EU refers to as a “maintenance and alignment” package, are a broadening of previous measures and now include Russian gold exports. The package also extends the list of individuals and entities that would be subject to potential asset freezes.

"We are effectively banning Russia’s most significant export after energy – Russian gold. We are also extending the exemption of transactions for agricultural products and transfer of oil to third countries. Because the EU is doing its part to ensure we can overcome the looming global food crisis. It is up to Russia, to stop bombing Ukraine’s fields and silos, and stop blocking Black Sea ports," said EU's High Representative for Foreign Affairs and Security Policy Josep Borrell.

Thursday's package introduces a new prohibition "to purchase, import, or transfer, directly or indirectly, gold, if it originates in Russia and it has been exported from Russia into the EU or to any third country after," the press release stated. The prohibition also covers jewelry.

The package extends the list of controlled items, "which may contribute to Russia’s military and technological enhancement or the development of its defense and security sector," it added.

However, the EU is extending the exemption from prohibition to engage in transactions with state-owned entities the transactions for agricultural products and the transport of oil to third countries "with a view to avoid any potential negative consequences for food and energy security around the world," the release noted.

This step is aimed at avoiding food crisis stemming from the war.

Similarly, third countries and their nationals operating outside of the EU won't be prohibited from purchasing pharmaceutical or medical products from Russia.

The Ukrainian military says Russia has used up to 60% of its pre-war stocks of high-precision weaponry and that Western sanctions have made it harder for Moscow to replenish its stocks.

“[Ukrainian] military intelligence is tracking the condition and numbers of the weaponry that Russia using. As for the high-precision weaponry — that it is what Russians are saying, Iskander, Kalibr system, the cruise missiles Kh-101, Kh-555 — we asses that 55-60% of the pre-war stores have been used up,” a representative of the Defense Intelligence of the Armed Forces of Ukraine, Vadym Skibytsky, said during a press conference on Thursday.

“Therefore, we have not seen them use [those] missiles for quite a long time,” he added.

Russia has been using repurposed anti-ship and anti-aircraft missiles to target Ukrainian forces in recent weeks, according to Kyiv.

Ukrainian military intelligence says Western sanctions have made it harder for Russia to replenish stocks of the parts of its more advanced equipment.

“Many components were manufactured abroad. But the restrictions introduced due to international sanctions do not enable [Russia] to openly get the components,” Skibytsky explained. “But as for the old, Soviet Union weaponry […] these are quite huge stores and it’s difficult to assess them.”

Russian bombardment killed three people and injured 23 in Kharkiv on Thursday, according to the regional prosecutor's office.

Russia attacked a public transport stop near the market in the Kyivskyi district of Kharkiv with Uragan rocket launchers on July 21 at 9:30 a.m. local time, the prosecutor’s office posted on Telegram.

The Russian military also shelled the Saltivskyi district of Kharkiv, hitting a residential building and injuring three civilians, the office added, saying it launched a criminal investigation into these attacks.

There was also heavy shelling of the town of Chuhuiv overnight, according to the regional military administration. Chuhuiv lies to the west of important Russian supply lines for its offensive in the eastern city of Donetsk.

The administration said the water treatment plant was damaged.

Synehubov said despite relentless shelling in the Kharkiv region, "since May, the enemy has not taken new territory — not a single meter."

"Our forces are holding their positions and trying to move forward. But the enemy focused its attention precisely on the defense of its own positions. It is not leaving Kharkiv region voluntarily," Synehubov added.

The shelling follows a series of Russian bombardments on the northeastern city this week.

A 13-year-old boy was among three victims of a Russian attack in the Saltivskyi district of Kharkiv on Wednesday.

At the time, Synehubov advised people in Kharkiv — Ukraine's second-largest city before the start of Russia's invasion — not to go outside unless necessary.

''We cannot rely on commitments from Gazprom,'' Habeck said Thursday via video call on Nord Stream 1 and Germany's gas situation, after Gazprom, the Russian state energy giant, resumed gas shipments through the Nord Stream 1 pipeline from Russia into Germany on Thursday.

''Gas supplies of 40% are not enough for the upcoming winter,'' Habeck went on to say. ''Russia uses a too big power to blackmail Europe and Germany."

Gas shipments via Nord Stream 1 have fallen by 60% in recent weeks, while an annual maintenance period from July 11 to July 21 reduced gas flows to zero. On Thursday, Gazprom restarted the gas flows at the same lower level as before the pipeline was shut down for maintenance works.

In June, Habeck said that Germany would struggle to fill up its gas storage tanks before cold weather arrives if the gas pipeline Nord Stream 1 does not become fully operational again, raising the likelihood of energy rationing.

To that end, Habeck urged Germans to take shorter showers to save energy and called on industry and consumers to turn down the heating this winter.

He also announced another package of measures to ensure Germany's energy security, saying that the measures include stricter requirements for filling gas storage facilities and activating lignite reserve plants from Oct. 1.

Habeck went on to say that the package also includes energy-saving measures in public buildings.

When asked about the Russian president’s health on a conference call with reporters, Peskov said Putin feels “fine” and that “he is in good health.”

Putin was visibly having symptoms of a cold during his visit to Tehran on Tuesday and coughing during meetings the next day, which he explained with heat and strong air conditioning.

“Yesterday it was very hot in Tehran — plus 38, and the air conditioning there was working full on there, so I apologize,” Putin said during a video conference on Wednesday.

Vladimir Putin is “entirely too healthy,” CIA Director William Burns said Wednesday. But he acknowledged that this wasn’t “a formal intelligence judgment.”

“There are lots of rumors about President Putin's health, and as far as we can tell, he's entirely too healthy," he said.

Russian forces are struggling to make headway in the grueling battle for control of Donetsk, despite striking the eastern region with a flurry of attacks in the past week. 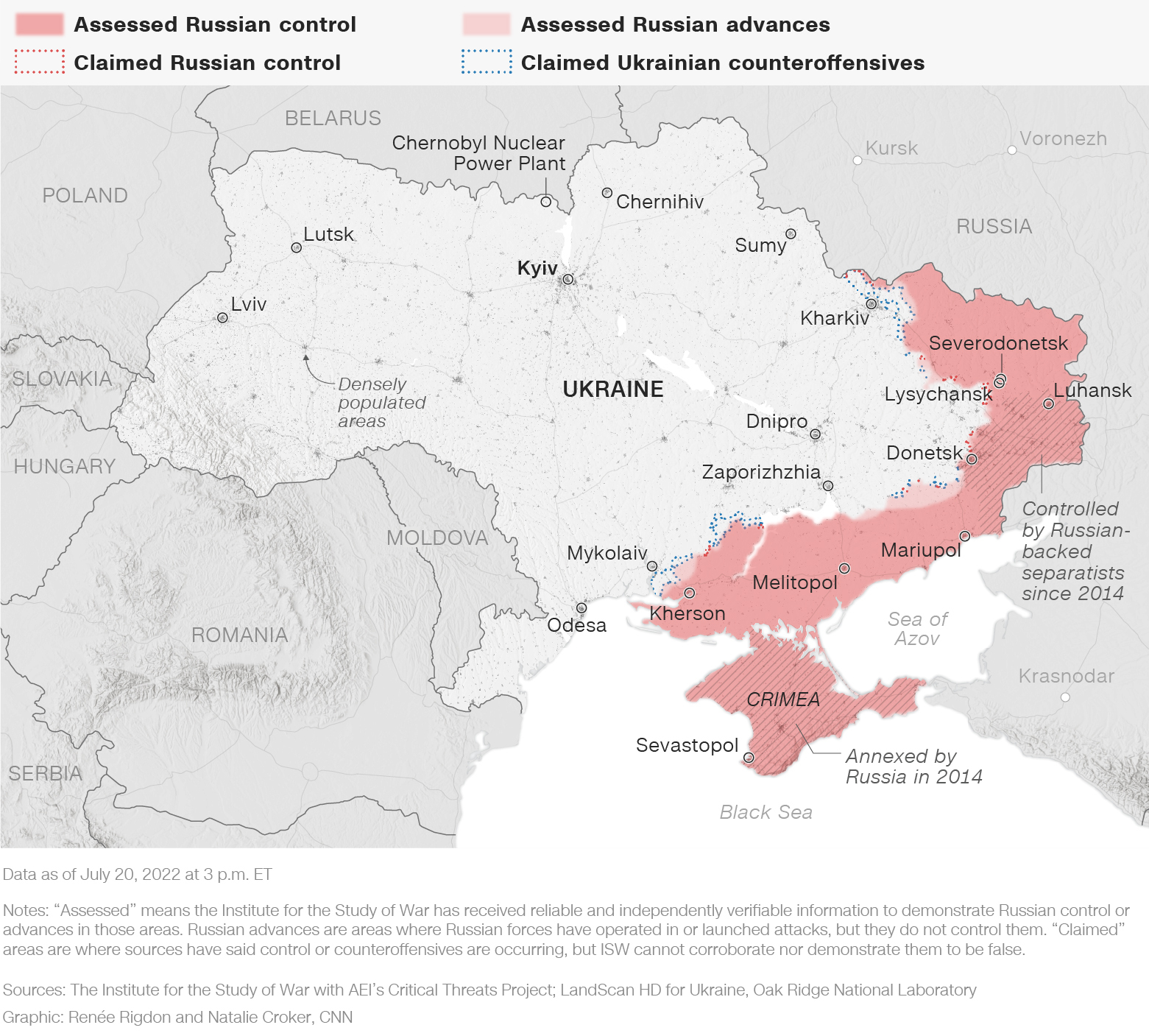 Russia has yet to take out any of the Western rocket artillery donated to Ukraine, according to the US Chairman of the Joint Chiefs of Staff, Mark Milley. This comes as Russia claims that they had hit HIMARS near the front line.

"To date the HIMARS that we have provided them – and we're not the only country by the way, other countries are providing long range fires as well, Britain, for example, and some others are donating long range rocket artillery – to date those systems have not been eliminated by the Russians," he said after the fourth meeting of the Ukraine Defense Contact Group on Wednesday, a platform which includes 50 countries from all continents.

Milley went on to detail how Ukraine was putting the donated rocket systems to use.

"The Ukrainians are effectively employing these HIMARS strikes against Russian command and control nodes, their logistical networks, their field artillery and air to find sites and many other targets," Milley told journalists in DC. "The Ukrainians have excellent artillery soldiers, excellent gunners as the British would call them and they're being very, very effective."

Ukrainian Defense Minister Oleksiy Reznikov acknowledged the praise that Ukraine has received from the US and other allies on its use of the donated multiple launch rocket systems, such as the HIMARS.

"I would like to note that the American partners and as well as colleagues from other countries expressed their admiration for the skill of our soldiers, including the way they use artillery and HIMARS," Reznikov said.

The minister said these Western donated weapons were "already affecting the course of the war."

In his review of the meeting, Reznikov also said the Ukraine Defense Contact Group had been presented with an overview of the situation in the battlefield, which, he claimed, showed Russia had suffered significant losses in terms of manpower and equipment.

"These are impressive numbers which prove that Ukraine is indeed the shield of Europe," he said. "It is important that this overview was prepared specifically by the partners based on their data and evaluations."

The father of a 13-year-old boy who was killed by Russian shelling in Kharkiv on Wednesday prayed over the body of his dead child for two hours, according to a top Ukrainian official.

The boy's sister was also wounded in the shelling, the Ukrainian Ambassador to the US, Oksana Markarova, said on Thursday.

"Ukrainian father who holds the hand of his 13-year-old son killed by Russian shelling in Kharkiv today. His sister is wounded. The father read prayers over his son for two hours. After the attack three people were killed. We must stop criminal and terrorist Russia now," Markarova tweeted.

Markarova's post also featured two photos showing the father holding the hand of his dead son as the boy's body lay on the ground covered with a red foil sheet.

The young teenager was among three victims of a Russian attack in the Saltivskyi district of Kharkiv, according to Oleh Synehubov, head of the regional military administration. The shelling also killed a man and a woman.