Nataliya Humeniuk, spokeswoman for Operational Command South, told Ukrainian television: "Yes, there were blows on the bridge, and they were precise."

Some context: The Antonivskyi Bridge is one of three that had previously been struck by long-range Ukrainian artillery in an effort to disrupt Russian reinforcements and supplies being moved into Kherson from Crimea.

Ukrainian officials have previously said their goal is to allow civilian traffic to continue using the bridge while making it impassable for heavy equipment.

"Our forces keep strategic logistics and transport routes under fire control, which are of critical importance to the enemy. We are not destroying the infrastructure; we are destroying the enemy's plans," Humeniuk said.

Sobolevskyi said the Russians were not letting anyone near the bridge, but the restoration would take a long time and pose problems for Moscow's forces. 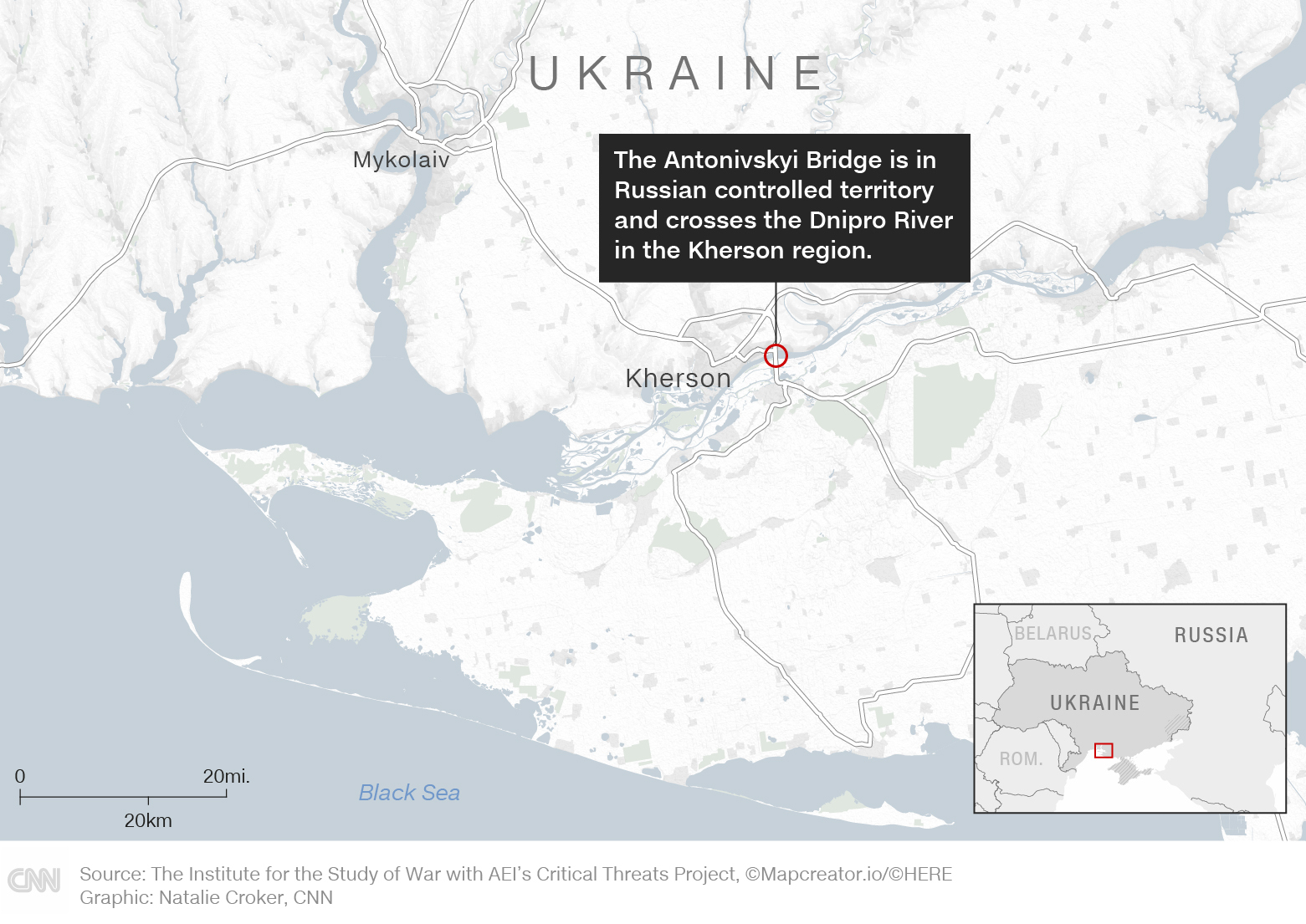 Russia downplays impact: Deputy head of the Russian-backed administration in Kherson, Kirill Stremousov, said the "hysteria that is being spun in the media about how the war is going to be decided on this bridge, it’s just a bluff."

"Now the bridge is shut off to traffic, which only made life a little more difficult for the population of Kherson and the Kherson region. Let me emphasize again, the outcome of the hostilities, the counterattack, will in no way be dictated by their [army’s] performance," Stremousov said.

Southern counteroffensive: Humeniuk, spokeswoman for Operational Command South, also said Ukrainian forces had made advances in the north of Kherson.

"The counteroffensive in the south of Ukraine is moving forward. The Russian army is demoralized," she claimed.

She said two villages — Andriyivka and Lozove — had been liberated, and Ukrainian forces were strengthening their positions. The Ukrainian offensive in Kherson began in late May but has made only modest progress so far.

The shelling occurred around 4:25 a.m. local time, Terekhov said, adding that rescuers are already on-site sorting through the rubble.

"According to them, there are no victims, but this is only preliminary information. I hope it remains that way," he said. "I ask everyone in the city to be as careful as possible."

Kharkiv, which has seen some of the fiercest fighting of the war, has continued to come under attack by Russian forces.

The Biden administration is working furiously behind the scenes to keep European allies united against Russia as Moscow further cuts its energy supplies to the European Union, prompting panic on both sides of the Atlantic over potentially severe gas shortages heading into winter, US officials say.

On Monday, Russia's state-owned gas company Gazprom said it would cut flows through the Nord Stream 1 pipeline to Germany in half, to just 20% of its capacity. A US official said the move was retaliation for Western sanctions, and that it put the West in "unchartered territory" when it comes to whether Europe will have enough gas to get through the winter.

In response to the turmoil, the White House dispatched presidential coordinator for global energy Amos Hochstein to Europe on Tuesday, officials said. He will be traveling to Paris and Brussels to discuss contingency planning with the US-EU energy task force created in March, one month after Russia's invasion of Ukraine.

"This was our biggest fear," said the US official.

The impact on Europe could boomerang back onto the US, spiking natural gas and electricity prices, the official said. It will also be a major test of European resilience and unity against Russia, as the Kremlin shows no signs of retreating from Ukraine.

The US and Brussels have been pleading with EU members to save gas and store it for winter, and on Tuesday, energy ministers agreed in principle to cut gas use by 15% from August to March.

There will also be discussions in the coming days about increasing nuclear power production across Europe to offset gas shortages, officials said. Germany was planning to completely phase out its use of nuclear power by the end of 2022, but US officials are hoping to convince Berlin to extend the life of its three remaining nuclear power plants amid the energy crisis, an official said.

The Russian military is deploying additional forces to its southern flank, bolstering its positions in the Kherson and Zaporizhzhia regions, according to Ukrainian officials and videos posted on social media that were geolocated by CNN. Analysts suggest the move is presumably to try and counter an eventual Ukrainian counteroffensive.

Several posts on Ukrainian social media accounts reference the movement of heavy military equipment on top of trains or clogging up highways through the Crimean peninsula and into the Kherson region. CNN geolocated several videos, filmed in the past few days, which show convoys crossing from Crimea into Kherson. Other videos showed the convoys heading toward Crimea, across the Kerch straight, from Krasnodar in Russia.

The spokespeople for the Ukrainian General Staff and the Ukrainian Operational Command South declined to comment, but the Office of the Ukrainian President in Crimea said the “movement of military equipment, ammunition, and personnel of the Russian army continues throughout the territory of the occupied Crimean peninsula.”

“Every day, about 50 wagons with echelons of Russian military equipment move towards Dzhankoi, queues of military equipment are also noticed at the administrative border with occupied Crimea, near the settlements of Armiansk and Krasnoperekopsk,” the office said in a statement on Facebook on Monday.

Analysts have suggested this movement of heavy equipment could be in anticipation of a Ukrainian counteroffensive to try and retake Russian-controlled areas in the Kherson and Zaporizhzhia areas. In its daily assessment of the Russian campaign on Monday, the Institute for the Study of War said that “Russian forces continued to fortify their positions in Zaporizhzhia and Kherson Oblasts in preparations for Ukrainian counteroffensives.”

What Russia is saying: The Russian Defense Ministry denied Moscow is deploying additional forces to Ukraine.

“A number of foreign media outlets are spreading false information about alleged mobilization activities,” the ministry said in a statement on Tuesday. “We draw your attention to the fact that only a part of the Armed Forces of the Russian Federation is involved in the conduct of a special military operation, the number of which is quite sufficient to fulfil all the tasks set by the Supreme Commander-in-Chief.”

Russia says it is planning to pull out of the International Space Station and end its decades-long partnership with NASA at the orbiting outpost, according to the newly appointed head of Russia's space agency.

Roscosmos chief Yury Borisov told Russian President Vladimir Putin that "the decision to leave this station after 2024 has been made."

"You know that we are working within the framework of international cooperation at the International Space Station. Undoubtedly, we will fulfil all our obligations to our partners, but the decision to leave the station after 2024 has been made," Borisov told Putin in the Kremlin-issued readout.