The Russian trial of WNBA star Brittney Griner will continue Tuesday as US officials attempt to negotiate a prisoner swap for her release.

The scheduled appearance in a courtroom near Moscow will mark Griner's seventh hearing as Russian prosecutors accuse her of trying to smuggle less than 1 gram of cannabis oil in her luggage while traveling through a Moscow airport in February.

Griner pleaded guilty last month, a decision her lawyers hope the court will take into account and potentially result in a less severe sentence. She faces up to 10 years in prison.

The proposed prisoner swap: Amid this pressure and after months of internal debate, the Biden administration proposed a prisoner swap with Russia, offering to release a convicted Russian arms trafficker in exchange for Griner and another American detainee, Paul Whelan, people briefed on the matter told CNN.

US officials did not accept the request as a legitimate counteroffer, the sources told CNN, in part because the proposal was sent through an informal FSB backchannel. Krasikov's release would also be complicated because he is currently in German custody.

At the same time, he warned, "We cannot be under any illusion that Russia will simply refrain from trying to disrupt Ukrainian exports. Russia consistently provoked famine in the countries of Africa and Asia, which traditionally imported significant amounts of Ukrainian food. And now — in conditions of extreme heat, as this year in Europe, the threat of a price crisis and a certain food shortage is also present for some European countries."

He said he'd asked Macron "to help us to unblock macro-finance, which has stalled in Europe. I want to remind all the leaders that it is 9 billion euros. These are not trifles for us, but important social things — these are our pensions, these are our salaries, support for immigrants."

Every attempt by Russian forces to advance in the eastern Donetsk region in the past 24 hours has been repelled, according to the Ukrainian military.

In its latest update on the battlefield situation, the Ukrainian General Staff said Russian reconnaissance units had suffered losses and retreated in several areas.

Once again the focus of Russian efforts was around the city of Bakhmut.

"The enemy tried to improve the tactical position in the areas of Soledar, Vershyna and Bakhmut with assault actions, but was unsuccessful and retreated," the General Staff said.

Another Russian effort to advance near Avdiivka, north of the city of Donetsk, had also been repelled and hostilities in the area continued, it added.

On the southern front, the military said there was widespread shelling across the River Inhulets, where the Russians are trying to stall Ukrainian advances.

The first ship carrying grain under a UN-brokered export deal left the Ukrainian port of Odesa on Monday, raising hopes that a global food supply crisis caused by Russia's invasion can be eased.

It is bound for the port of Tripoli, Lebanon, and is carrying a cargo of around 26,500 metric tons (more than 29,000 US tons) of corn, the United Nations said. 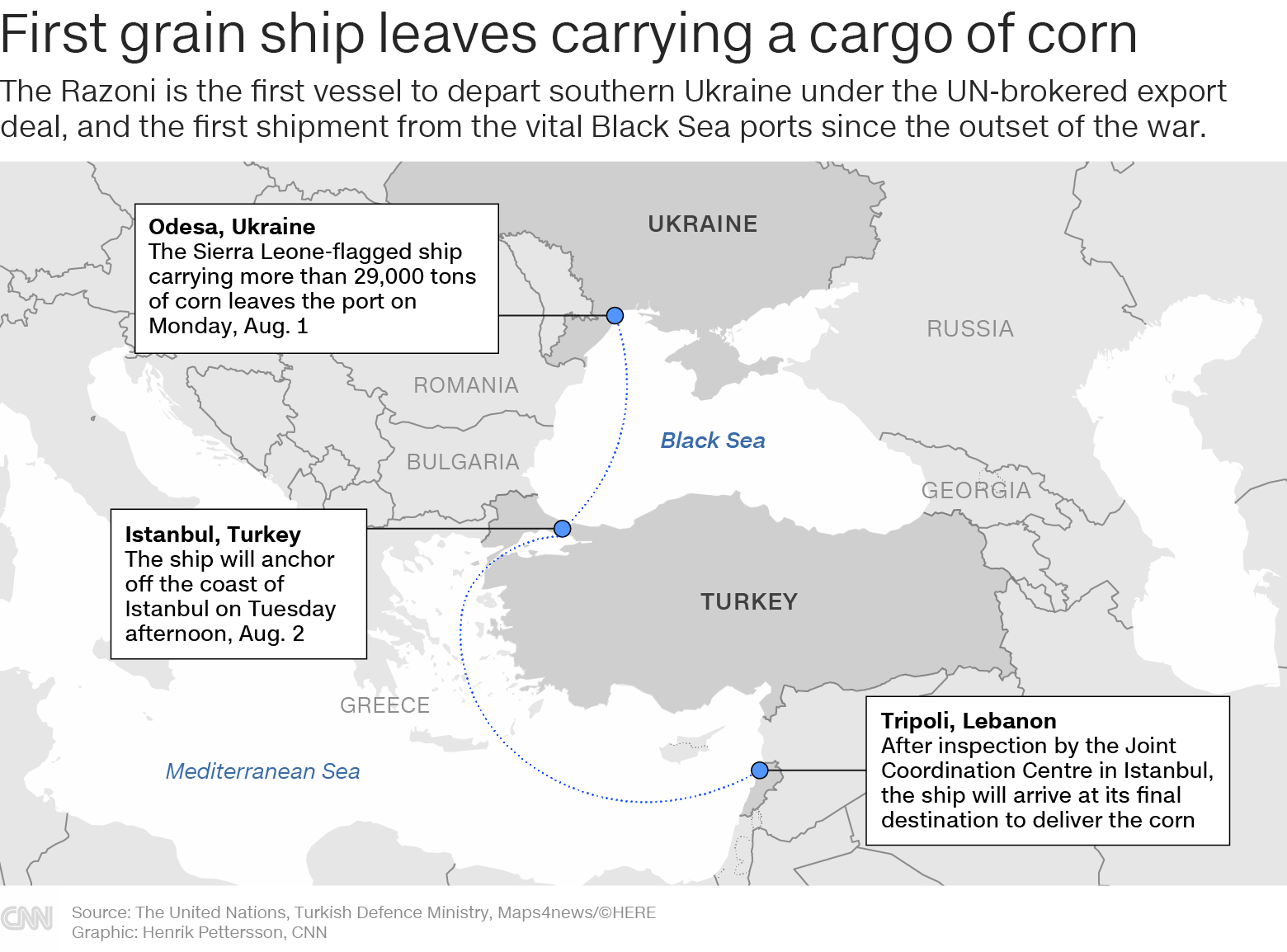 The journey comes after a breakthrough agreement, brokered by the UN and Turkey and signed by representatives from Russia and Ukraine in July, which facilitates the resumption of vital grain exports. Some 20 million metric tons of wheat and corn have been trapped at the port of Odesa, the US Agency for International Development (USAID) administrator Samantha Power said last week.

Ukrainian Foreign Minister Dmytro Kuleba described Monday as a "day of relief for the world, especially for our friends in the Middle East, Asia, and Africa."

Under the terms of the deal, the ship will anchor off the coast of Istanbul at around 3 p.m. local time (8 a.m. ET) on Tuesday, where it will be inspected before proceeding to its final destination.