The US State Department has sanctioned two high-ranking Belarusian officials “for involvement in gross violations of human rights, namely the arbitrary detention of peaceful protesters,” and will move to impose visa restrictions “on 100 regime officials and their affiliates for their involvement in undermining or injuring democratic institutions or impeding the transition to democracy,” Secretary of State Antony Blinken said Tuesday.

The measures were announced on the second anniversary of the election in Belarus – a fraudulent election and one in which longtime strongman leader Alexander Lukashenko claimed victory. It sparked massive protests throughout the country.

“The Belarusian people have demonstrated remarkable resilience in sustaining the pro-democracy movement for two years at great personal sacrifice. These calls for democracy are voiced by Belarusians exiled abroad, over 1,200 political prisoners unjustly detained inside the country, and countless ordinary Belarusian citizens,” Blinken said in a statement.

“Their peaceful calls for democracy have been met with unprecedented brute force and a consolidated crackdown by the Lukashenka regime,” he said.

According to Blinken, the new tranche of those facing visa restrictions includes “those holding high-ranking positions in the Administration of the President, Ministry of Interior, State Security Committee (KGB), the Central Election Commission, the Prosecutor General’s Office, Central Office of the Investigative Committee, Ministry of Transport and Communication, Main Directorate for Combatting Organized Crime and Corruption (GUBOPiK), the National State TV and Radio Company ‘Belteleradio,’ the Second National Television Station, and the Air Force and Air Defense Forces,” as well as “members of Parliament, district judges, security officials, members of executive committees, and state university administrators.”

“Individuals subject to the proclamation have been implicated in torture; violent arrests of peaceful protesters; raids of homes and offices of journalists, members of the opposition, and activists; coerced confessions; electoral fraud; politically motivated sentences of political prisoners; expulsion of students for participation in peaceful protests; passage of legislation impacting the enjoyment of fundamental freedoms; and acts of transnational repression,” Blinken said.

There has been a series of explosions in the area of a Russian air base in Crimea.

Social media images and video showed a large plume of smoke rising from the vicinity of the air base at Novofedorivka, on Crimea's west coast.

Oleg Kryuchkov, adviser to the head of the Crimean region, confirmed several explosions had occurred near the village of Novofedorivka.

"So far, I can only confirm the fact of several explosions in the Novofedorivka area. I ask everyone to wait for official messages and not to produce versions," Kryuchkov said on his Telegram channel.

“Around 3.20 pm, several aviation munitions detonated on the territory of the airfield 'Saki' near the settlement of Novofedorovka, on a bunded storage site,” a Russia defense ministry statement said, according to RIA Novosti.

State media reported there were no injuries due to the explosions, and aviation equipment at the airfield was not damaged, citing the defense ministry.

Separately, Sergey Aksenov, the head of the so-called Republic of Crimea, said he visited the scene and that "the circumstances are being clarified."

Ambulance crews and an air ambulance were sent to the site of the explosions, according to the Ministry of Health of the region.

There has been no word from the Ukrainian side about any attack in the area. Ukraine is not known to have struck the territory of Crimea since the Russian invasion began.

Oil supplies via the southern line of Druzhba to Hungary, the Czech Republic and Slovakia have been suspended, while the transit through Belarus toward Poland and Germany continues, according to TASS.

"Ukrtransnafta suspended providing services on transportation of oil through Ukrainian territory starting August 4, 2022, due to the lack of receipt of monetary funds for services provided. The transit via the northern line of the Druzhba oil pipeline through Belarus towards Poland and Germany is per normal," Transneft said, according to TASS.

Supplies were carried out on a prepaid basis, but Transneft could not pay for transit services due to the European Union’s sanctions, the company said. Transneft made a payment on July 22 but it was returned to the company’s account, it said.

"As of now the European banks (correspondents) are no longer authorized to independently decide on the possibility of this or that transaction. To confirm the fact that the transaction is not among those banned it is necessary to obtain a permit from the national authorized state body. The fact that European regulators have not yet articulated a consensus on the algorithm of actions for banks in various jurisdictions, as well as the order of providing such permits, makes things even more complicated," Transneft added, according to TASS.

To resolve the issue, Transneft has submitted a request to the authorized bank to transfer information to the European regulator to obtain a permit to carry out payments, according to TASS, while alternative options for making payments are also being developed.

The Ukrainian military has carried out what appears to have been their deepest strike yet into Russian-occupied regions of the country.

"This morning there was a good news, there was a very powerful detonation in Henichesk region," Serhii Khlan, adviser to the head of Kherson Civil Military Administration, said on Ukrainian television Tuesday.

Henichesk is in southern Kherson region, close to Crimea, and about 200 kilometers, or about 125 miles, from the nearest Ukrainian front line.

Khlan suggested that the target had been on the railway between Henichesk and Melitopol.

"We are still waiting for the official confirmation of our Armed Forces, from the General Staff, but it's a very pleasant news. The detonation was heard during 1.5-2 hours on this railway station, which connects Crimea and Melitopol," he said.

Fighting continues around the town of Bakhmut in eastern Ukraine, while Moscow has called for dialogue with the US after suspending inspections under a key nuclear weapons treaty. 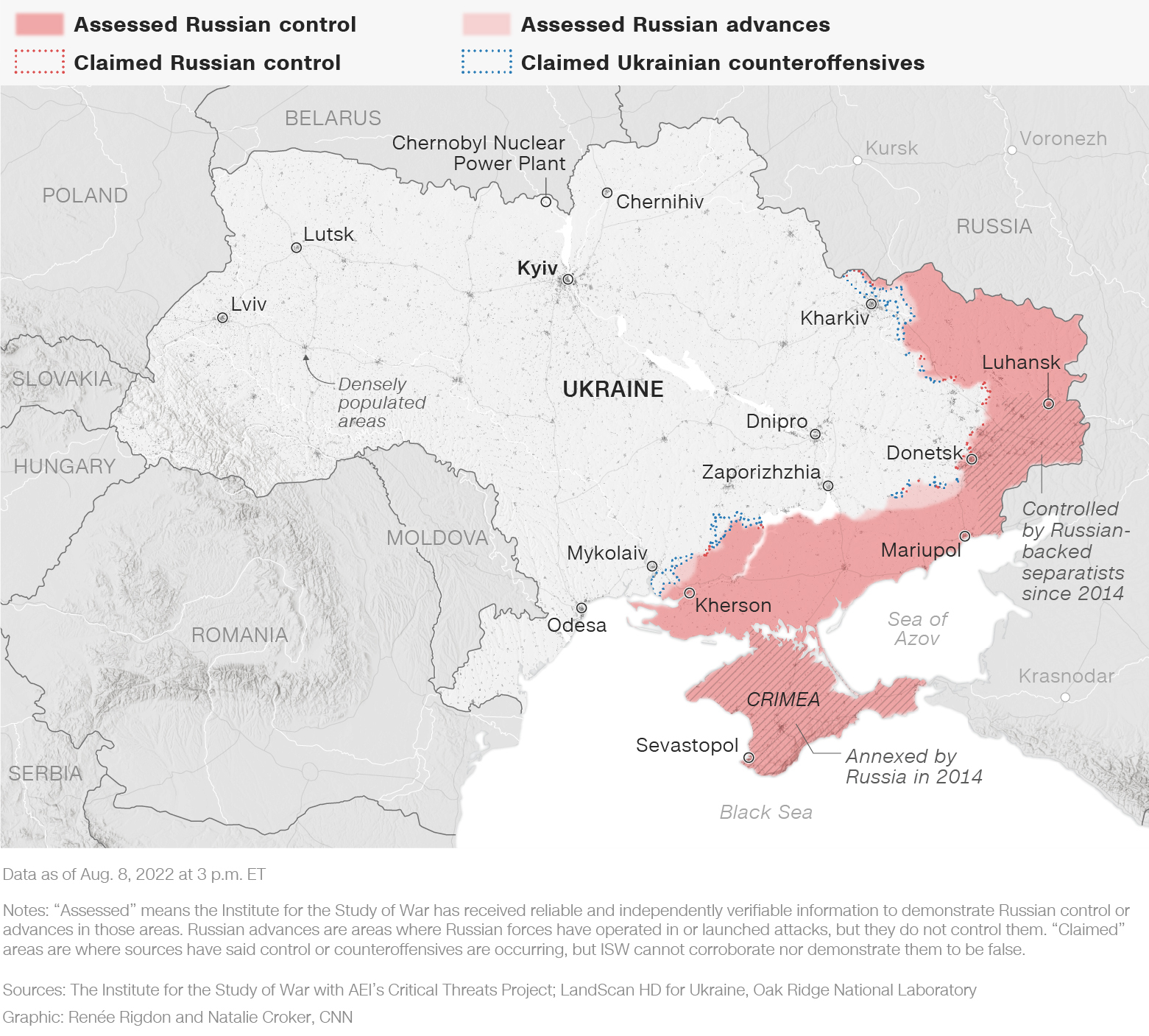 The Russia-backed leader of the self-proclaimed Donetsk People's Republic, Denis Pushilin, said they are negotiating with North Korea to bring in construction workers "to restore the territory of the Republic."

On Russian television on Tuesday, Pushilin also announced that "fair" tribunals will be held soon "over the war crimes of Ukraine," with one of the first being held in Mariupol.

"From the testimonies of the Azov fighters and the data that investigators receive after studying their positions, command posts, a complete picture of what is happening is being formed," he said.

Some context: On the battlefield, Pushilin said Russian forces and their allies are advancing northwards into Donetsk, with "ongoing combats" on the outskirts of Bakhmut and Soledar. He also claims Ukrainian forces have sustained heavy losses in the sweeping operations in Pesky, also in Donetsk.

On Tuesday, the Ukrainian military's General Staff said that Russia was keeping up the offense in Bakhmut, but "Ukrainian soldiers inflicted fire damage and forced the invaders to flee."

He added that their forces had also rebuffed Russian attacks on the outskirts of Donetsk.

Russia and the US need to continue dialogue on the START nuclear weapons treaty, Kremlin Spokesman Dmitry Peskov said Tuesday, following Moscow's announcement that it will temporarily suspend inspections of its facilities under the treaty.

Speaking to reporters on a conference call, Peskov refused to comment directly on Russia’s decision and referred questions to the country's foreign ministry, which issued Monday's official statement.

Asked whether Moscow is ready to present to Washington further proposals on START, or is instead waiting for the US to make the first move, Peskov said: “Time will tell. We haven't received any specific proposals on this yet. But once again we repeat: dialogue is necessary.”

On Monday, Russia's Foreign Ministry said Russia "is compelled to resort to this measure due to Washington’s stubborn striving to achieve, without prior arrangement, the resetting of inspection activities on conditions that do not take into account existing realities and are creating unilateral advantages for the United States, and are de facto depriving the Russian Federation of the right to conduct inspections on American territory."

A US State Department spokesperson said Monday that "the principles of reciprocity, mutual predictability, and mutual stability will continue to guide the US approach to implementation of the New START Treaty, as they have since the treaty entered into force in 2011."

"We keep discussions between the parties concerning treaty implementation confidential," added the spokesperson.

On Tuesday, the head of the Ukrainian state-owned nuclear power company Energoatom warned that Ukraine and Europe could face another Fukishima if the power supply to the massive Zaporizhzhia Nuclear Power plant is further disrupted.

Speaking to CNN on Tuesday in Kyiv, Petro Kotin said that only one power line to the massive complex was now operational after shelling damaged the lines in the past few days.

“If there is no connection to the grid, then you cannot provide electricity from the outside, then the diesel generators will start. But everything will depend on the reliability of those generators. … This is a dangerous situation, because if those stop you could have a disaster of melting nuclear materials,” he said, comparing the potential fallout to the Fukishima disaster in Japan.

The Fukishima plant’s reactor overheated when the backup power supply failed after the impact of the Tsunami in 2011.

Kotin said that Energoatom has supplies ready to go into the facility for repairs, but they haven’t been able to enter the site.

The Zaporizhzhia plant occupies an extensive site on the Dnipro River. It has continued operating at reduced capacity since Russian forces captured it early in March, with Ukrainian technicians remaining at work.

OSunday, Ukraine's Energoatom released a statement that said that one worker had been injured by Russian shelling around the facility on Saturday.

There are around 1000 employees still on the site, according to Kotin, who have kept communications lines open but are working under constant stress of the occupying force including beatings and threats.

“If the situation worsens, we need to think about our population at the plant. We are planning on how, during war conditions, we will be able to evacuate the personnel.”

“Great release of radioactivity could happen from there. There could be a cloud, a radioactive cloud,” he said, adding that the international community needs to work quickly to demilitarize the zone.

Kotin told CNN that the ultimate plan of the Russians is to disconnect the plant from powering Ukraine and connect it to the grid to power occupied Crimea.

Like other Ukrainian officials, he blames Russia for shelling the complex – he said the distance of the incoming strikes suggested Russian positions.

Visiting Ukraine right now to experience what's it like living in the middle of a war, seeing its bombed cities and feeling the danger isn't likely to be high on many people's travel wish list.

But six months after Russia invaded the country, unleashing a wave of death and destruction, one organization is inviting tourists to come visit Ukraine.

Online platform Visit Ukraine.Today last month launched guided day tours of the so-called "Brave Cities" that have defied and continue to resist Russian invaders, offering travelers a look at how the country is living amid conflict.

"Set off on a journey to awesome Ukraine right now," the tour company's website implores.

Despite international alerts warning against travel to Ukraine, the company says it's so far sold 150 tickets, while its website offering information on safely traveling to and from Ukraine is receiving 1.5 million hits a month, up 50% on pre-invasion numbers.