Seven people were killed and 20 others wounded in a Russian rocket attack on an apartment building in the northeastern city of Kharkiv in the early hours of Thursday, Ukrainian officials said.

Emergency services said a fire at the three-story building in Saltivka district took two hours to bring under control.

"There is no justification for this kind of strike on Saltivka, on a residential building. This is not a military target. This is an act of intimidation, genocide," Kharkiv Mayor Ihor Terekhov said on Telegram.

According to the mayor’s office, at least four missiles landed in the city in the early hours of Thursday. One of them hit on a dormitory in the Slobidsky district, killing one person and injuring another 18, Ukrainian officials said.

Finland, a country that shares an 830-mile-long border with Russia, announced this week that it is to halve its cap on the number of visa applications from Russian citizens.

Currently, 1,000 Russians can apply for Finnish visas each day, but as of Sept. 1 that number will drop to 500. Jussi Tanner, director general for consular services at Finland's Ministry of Foreign Affairs, told CNN that a maximum of 20% of those slots will be allocated for tourist visas, meaning no more than 100 tourist visas will be available per day.

The move comes after Estonia, another European Union nation that borders Russia, banned even Russians who already had visas from entering the country. According to Reuters, that amounts to 50,000 people.

The Czech Republic and Latvia have also been supportive of visa bans and have also taken measures to restrict Russians from traveling into the EU.

The proposal was first floated by Ukrainian President Volodymyr Zelensky, who wants to stop Russians from entering the bloc, where they can then travel freely for 90 days in the EU's common travel zone, the Schengen area.

Not everyone agrees. German Chancellor Olaf Scholz says that while it is important to sanction those in Russian President Vladimir Putin's inner circle, Europeans need to "also understand that there are a lot of people fleeing from Russia because they disagree with the Russian regime."

A senior German diplomat told CNN that Scholz's argument is not based in fact, "as anyone can apply for a humanitarian visa." The diplomat believes that Scholz is mostly attempting to "balance his own party which is split between those who want dialogue with Russia and those who want to appear hard."

The Russian army "must withdraw from the territory of the nuclear power plant and all neighboring areas, and take away its military equipment," Zelensky said in his daily video message.

"This must happen without any conditions and as soon as possible. Ukraine is ready to ensure proper control by the IAEA [International Atomic Energy Agency], and the relevant mission can be sent to the Zaporizhzhia plant in a legal way, very fast and as efficiently as possible."

Both Ukraine and Russia have accused each other of threatening nuclear terrorism, particularly around the plant, which Russia has controlled since March.

The European Union and 42 countries this week urged Russia to immediately withdraw forces from the plant, while the IAEA has warned that attacks on the facility risk a potential radiation leak.

In his video address, Zelensky said "Ukrainian diplomats, our nuclear scientists and the IAEA are in constant touch" and are working on "sending the IAEA mission to the Zaporizhzhia nuclear power plant."

Zelensky is due to meet UN Secretary General António Guterres on Thursday in the western city of Lviv.

Battle update: In his address, Zelensky also referred to the situation on the front lines in the eastern Donetsk and northeastern Kharkiv regions, saying, "the Avdiivka area, Bakhmut area, Kharkiv region, and some other regions are where the most difficult fighting is going on right now."

The Ukrainian military acknowledged Wednesday that Russian forces had "partial success" in advancing on some parts of the front west of Donetsk city.

The Ukrainian armed forces have published a video purportedly showing a strike on a Russian position in the occupied southern Kherson region.

The armed forces said between 10 and 15 Russian soldiers had been killed in the strike against a Russian post near the town of Nova Kakhovka.

"The base of the occupiers was destroyed in Nova Kakhovka," the State Border Guard Service said separately.

Russian positions in and around Nova Kakhovka — as well as ammunition depots and rail links — have been repeatedly hit by long-range Ukrainian weapons and combat aircraft over the past month.

Ukraine was behind three explosions that rocked Russian military facilities in the annexed province of Crimea this past week, including an explosion at a Russian air base on the peninsula's west coast that wrecked several airplanes, according to a Ukrainian government report circulated internally and shared with CNN by a ​Ukrainian official. ​

The official requested anonymity because they were not authorized to share the information with the media.

The report describes the Saki air base, which was rocked by explosions last Tuesday, as a hard but one time loss for Russian military infrastructure in the peninsula, with subsequent attacks as proof of Ukraine's systematic military capability in targeting Crimea. 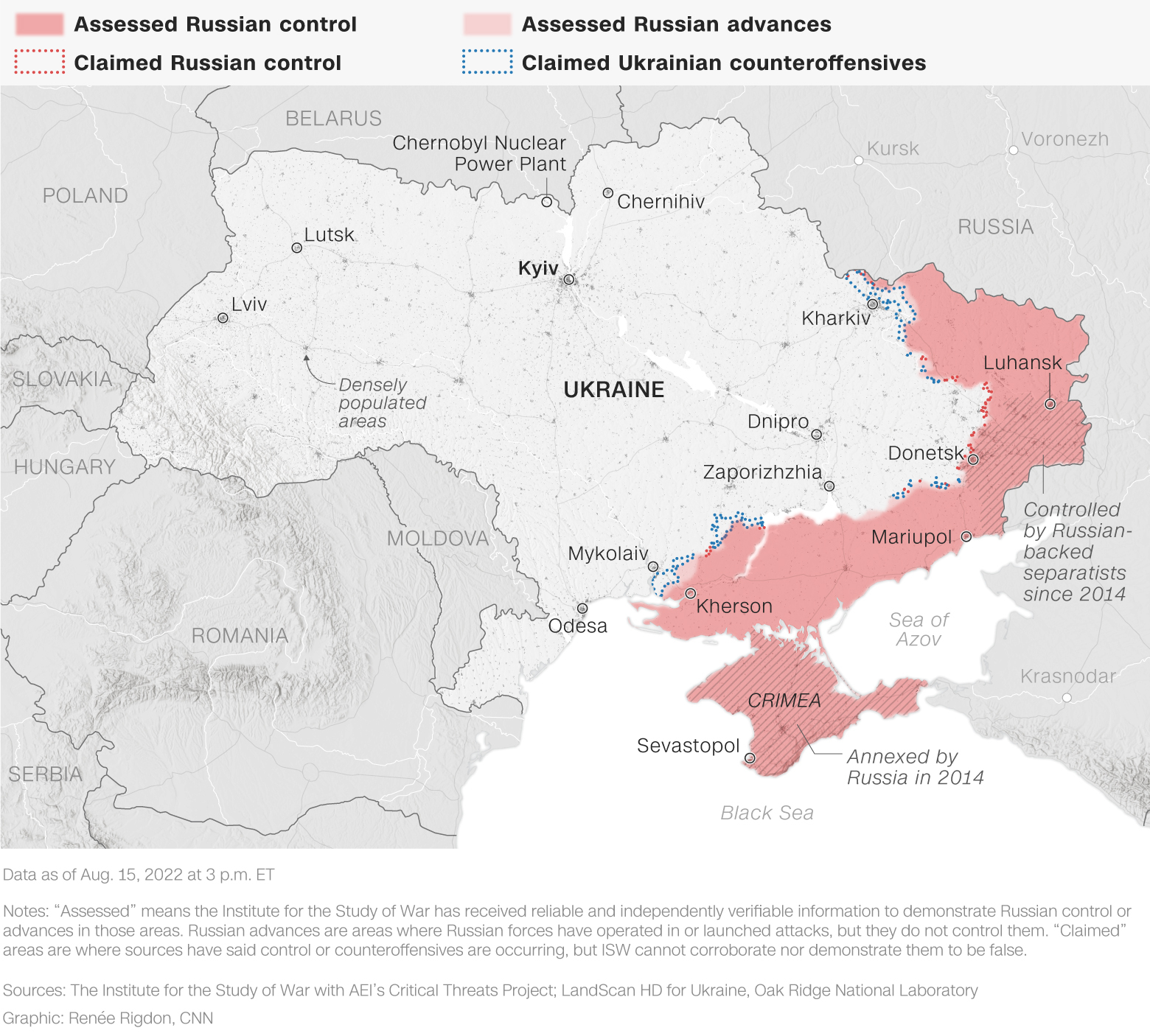 The Aug. 9 incident at Saki air base, which destroyed at least seven military aircraft, severely damaged the facility and killed at least one person​.

Russia claimed it was a result of an accident and Ukrainian officials have so far declined to confirm on the record that they were responsible. What caused the explosions remains unclear.

In a speech following the incident, Ukrainian President Volodymyr Zelensky said the war "began with Crimea and must end with Crimea — its liberation."​

Another set of explosions were reported in Crimea this week, on Aug. 16, this time at an ammunition depot in Maiske and at an airfield in Gvardeyskoe.

Russian officials said the incident in Maiske had been the result of sabotage​, but they did not specify the kind of sabotage, or whom they believed was responsible.

A long-touted Ukrainian counteroffensive to retake territory lost to Russia could begin soon, a spokesperson for Ukraine's Defense Intelligence said in a televised address on Wednesday.

"In the near future, there will be very acute events on the entire front," said Andrii Yusov, a spokesperson for the Defense Intelligence of the Ministry of Defense of Ukraine.

Ukrainian officials have been hinting at a counteroffensive to retake occupied territory — specifically in the south — for weeks, but so far they’ve limited their actions to striking Russian supply lines, air bases and ammunition depots, with very small gains at the front.

"This is not about binding to any dates, however, we have to consider [the] factor of the Independence Day of Ukraine," Yusov added, referencing the country’s independence day on Aug. 24.

"The Main Directorate of Intelligence has been saying for a long time that August and September will be extremely important periods for the further development of events on the entire front."