Ukrainian President Volodymyr Zelensky on Friday expressed his gratitude to US President Joe Biden following news that the United States would give an additional $775 million in military assistance to Ukraine through his presidential drawdown authority.

Some context: With this latest package, the Biden administration has now committed more than $10 billion in security assistance to Ukraine. This is the 19th package the US Department of Defense has provided Ukraine since August 2021.

The package includes equipment such as howitzers, ammunition, armor and drones.

Natural gas supplies to Europe through Russia's Nord Stream 1 pipeline will be suspended from Aug. 31 through Sept. 2, according to a statement on Friday from the Russian state energy giant Gazprom.

Friday's announcement comes after the Nord Stream 1 pipeline was shut down for 10 days in late July for "annual maintenance."

The crucial pipeline had already been running at less than 40% capacity, prompting concerns that Russia is deliberately choking supplies of gas to Europe in an energy stand-off following the Russian invasion of Ukraine. 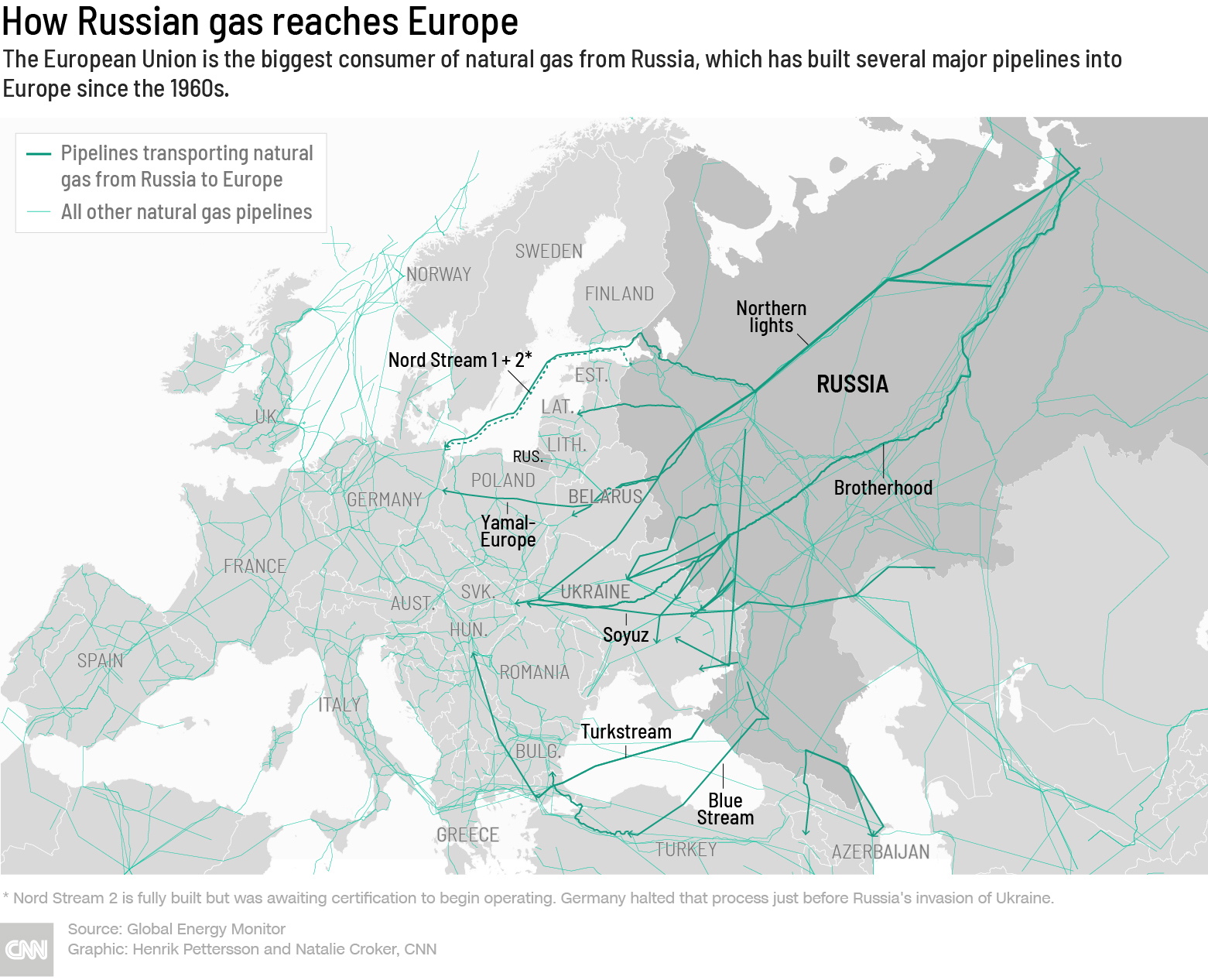 As the US government closely watches the situation at the Zaporizhzhia nuclear power plant in Ukraine, a senior US defense official says Russia has shown a “complete disregard” for the security of Ukraine’s nuclear facilities and that its actions around the plant now are “the height of irresponsibility.”

"This is a situation that the US government across the board and the national security community is watching very, very closely. We are very concerned about military operations at or near any of Ukraine’s nuclear power facilities and very concerned about any reports of damage to specifically Zaporizhzhia power lines," the official said, speaking to reporters in a news briefing on Friday.

"We’ve been very clear that fighting near a nuclear power plant is dangerous, is irresponsible and we want the fighters and Russia to operate with extreme caution and conduct no actions that would result in a potential radiological release," the official said.

"We see Russia's current actions in and around the plant as really the height of irresponsibility," the official added.

The US expects Russia to return full control of the plant to Ukraine and to comply with International Atomic Energy Agency safeguards, as well as provide access to the plant, added the official.

The US Defense Department announced it would provide $775 million in additional military assistance to Ukraine through Presidential Drawdown Authority (PDA), a senior defense official said Friday.

Here's what the package includes, according to the official who spoke to reporters on background:

With this latest package, the Biden administration has now committed more than $10 billion in security assistance to Ukraine. This is the 19th PDA package the department has provided Ukraine with since August 2021.

There are no signs of "systemic shelling" at the Zaporizhzhia nuclear power plant, new satellite images from Maxar Technologies show.

This counters Friday's claims by Russian President Vladimir Putin that the Ukrainian military was conducting repeated military strikes at the plant.

CNN has analyzed a number of satellite images of the nuclear power plant complex located in Enerhodar, Ukraine, and it shows little to no change in damage or destruction since July 19, when a Ukrainian military strike on three tents just under 1,000 feet from one of the nuclear reactors.

Putin made the comments to French President Emmanuel Macron, according to a Kremlin readout of the phone call.

Russian President Vladimir Putin agreed to a mission from the International Atomic Energy Agency (IAEA) to access the Russian-occupied Zaporizhzhia Nuclear Power Plant via territory controlled by Ukrainian forces during a call with French President Emmanuel Macron Friday, according to a source from the Élysée Palace.

Putin consented to an IAEA mission being dispatched to Zaporizhzhia, as well as a Ukrainian and French demand for the mission to not transit via Russian-occupied parts of Ukraine, the source said.

The source described this condition to the IAEA mission as “completely necessary, legitimate, indispensable” for the question of Ukrainian sovereignty.

The Élysée Palace earlier Friday announced that Putin indicated “his agreement” to the deployment of a mission, according to a readout.

In the call, Macron proposed the UN nuclear watchdog mission “as soon as possible” and “under conditions agreed by Ukraine and the United Nations,” per the statement.

The two presidents will talk with each other “in the coming days” regarding the deployment to Zaporizhzhia after discussions between technical teams and ahead of the deployment, the statement added.

What the Kremlin said about the call: Putin warned Macron that "systemic shelling" by the Ukrainian military risked a "large-scale catastrophe" at the Zaporizhzhia plant, according to a Kremlin readout of the phone call.

“Vladimir Putin, in particular, stressed that the systematic shelling by the Ukrainian military on the territory of the Zaporizhzhia nuclear power plant creates the danger of a large-scale catastrophe that could lead to radiation contamination of vast territories,” the Kremlin statement said.

More context: A barrage of accusations has been made by both the Russians and Ukrainians about security and military action at and around the plant, the largest nuclear complex in Europe. The lack of independent access to the plant makes it impossible to verify what is happening there. Over the past month, a number of rockets and shells have landed on the territory of the plant, according to satellite imagery analyzed by CNN.

The Kremlin statement also mentioned the possibility of an IAEA mission.

“The Presidents noted the importance of sending an IAEA mission to the nuclear power plant as soon as possible, which would be able to assess the real situation on the spot. The Russian side confirmed its readiness to provide the Agency inspectors with the necessary assistance,” according to the Kremlin.

Western officials said that the Russian Black Sea fleet had gone into a defensive posture after a series of setbacks. They said that at least half of the Black Sea Fleet's naval aviation arm had been taken out of action in the attack on Saki air base in Crimea last week.

The naval aviation arm of the fleet, the 34th Naval Ground Attack Aviation Regiment, has two squadrons of roughly two dozen combat aircraft altogether (including Su-24M and Su-30SM aircraft), according to published accounts. Previous assessments suggested at least seven — and maybe as many as 10 — aircraft had been damaged or destroyed in last week's attack.

Russia still has dozens of combat planes at two other bases in the Crimea, but they are not specifically assigned to the Black Sea fleet.

The officials said at a briefing on Friday that the Russian "system" was seeking to apportion blame for the losses, which the Russian defense ministry attributed to an accidental explosion of ammunition at the base.

The officials said the Ukrainian side was probably able to bring several assets to bear in Crimea and that Ukrainian forces do have the ability to operate behind Russian lines. Whether Ukrainian attacks in the south would have a strategic effect on the conflict would depend on whether Ukraine can sustain the level of activity, they added.

The officials said that Russian forces were experiencing problems in resupplying troops in the southern Kherson region, and they estimated that somewhere in the "low thousands" of additional Russian troops had been moved to the region in preparation for a possible Ukrainian offensive.

It remained to be seen, they said, how and when that offensive might take shape.

The officials said that the rise in rocket attacks by the Russians against Kharkiv, which have killed more than a dozen people in recent days, did not presage a Russian offensive in the area but a desire to prevent the redeployment of Ukrainian defenses elsewhere.

The conflict in Ukraine is near an operational standstill, with neither side able to generate sufficient ground combat capability to influence the course of the war, according to Western officials.

At a briefing on Friday, the officials said both sides were having manpower issues, with nearly six months of conflict bringing serious attrition of their forces. Those manpower problems are a contributing factor to the strategic deadlock, they said.

Speaking about the pace of the Russian offensive in the Donbas, the officials said: "There was a real high point. We aren't at that high point any more; the tempo has slowed down."

The officials said Russia was having a "terrible time" in trying to reconstitute its forces — for example, by merging battalion tactical groups.

They also said that a "looming issue" for Russia is an increasingly acute shortage of stocks, even of basic munitions, with evidence that older munitions are being taken out of storage.

"Ultimately, that will impair the Russians' ability to launch offensives," they said.