Leaders from around the globe marked this year's Ukrainian Independence Day and pledged continued support amid Russia's invasion via messages on Twitter:

US Ambassador to NATO Julianne Smith

“I am proud to announce our biggest tranche of security assistance to date: approximately $2.98 billion of weapons and equipment to be provided through the Ukraine Security Assistance Initiative. This will allow Ukraine to acquire air defense systems, artillery systems and munitions, counter-unmanned aerial systems, and radars to ensure it can continue to defend itself over the long term,” Biden said in a statement Wednesday.

Because this package falls under the Ukraine Security Assistance Initiative (USAI), it will not be drawn from existing US inventories. Instead, it will come from contracts with arms manufacturers, according to a US official.

Last week, the US announced a $775 million package that included HIMARS and 105mm howitzer ammo, anti-armor missiles, mine-clearing capabilities and more. That package came through Presidential Drawdown Authority, which means it will be pulled directly from US stocks.

Biden also congratulated the people of Ukraine on 31 years of independence, noting that the country has “inspired the world,” and added that the US “looks forward to continuing to celebrate Ukraine as a democratic, independent, sovereign and prosperous state for decades to come.”

CNN's Oren Liebermann and Ellie Kaufman contributed to this report.

"It’s an honour and a privilege to be here on such a significant day for Ukraine. Count on Portugal’s full solidarity and support!" he tweeted.

"On Independence Day, I welcomed Portuguese Foreign Minister @JoaoCravinho in Kyiv. Grateful to Portugal for consistently supporting Ukraine. We stand united to stop Russia from attacking not only Ukraine, but all of Europe — with energy blackmail, rising prices, and propaganda," he said.

Ukraine's Independence Day this year is a somber one, with President Volodymyr Zelensky, first lady Olena Zelenska and other dignitaries paying tribute to those who have been killed in military action since Russia invaded the country six months ago.

For all that the West can reasonably pat itself on the back for its initial response to the crisis, things are about to get much harder.

Across Europe, citizens are starting to feel the cost-of-living crunch across the continent — which comes as many European countries have already played host to thousands of Ukrainian refugees.

Against this backdrop, it is hard for political leaders to justify spending money and energy supporting a country far away, especially when some of their citizens may feel that they've been generous enough as it is.

Multiple Western officials told CNN of their concern that at some point, political leaders might decide the best thing is to broker for a peace deal and undercut the Ukrainian preferred end game, which is forcing Russian forces back to the previous borders.

"There is growing concern in some quarters that if Ukraine appears to be losing ground to Russia this may accelerate calls for a negotiated settlement," Theresa Fallon, director at the Centre for Russia Europe Asia Studies, told CNN.
"As soon as people sense that (Kyiv) is on the losing side, they may start to ask, 'why do we continue to supply costly weapons to Ukraine at a time of economic stress?' 'Why are we throwing good money after bad?'"

Political upheaval in the West: This will be critical, she pointed out, as many key allies also go through turbulent political periods at home. Italy will hold an election, the United Kingdom will have a new Prime Minister and the United States will hold midterm elections that may determine the rest of President Joe Biden's first term in office.

Most officials acknowledge that no one has a clue on how this conflict ends. And while most would like to see Ukraine achieve its goals of standing up to Putin and forcing him out of their country, their true resolve has yet to be fully tested.

Britain vowed in March to phase out all imports of Russian oil by the end of the year, shortly after the invasion of Ukraine, in the hopes that the move would help choke Moscow of a key revenue stream it needs to keep its economy afloat and its war effort humming along.

Russia was the UK's largest supplier of refined oil in 2021, accounting for 24.1% of all imports. Moscow also supplied 5.9% of the UK's crude oil and 4.9% of the the country's gas imports.

The national statistics office said that there were no imports of refined oil, crude oil, gas or coal, coke and briquettes from Russia

Imports down too: June also marked the lowest level of Russian imports to the UK since records began in 1997, falling to $39 million from more than $2 billion in January 2022.

At least 972 children have been killed or injured since Russia began its invasion of Ukraine on February 24, according to UNICEF.

“And these are just the figures the UN has been able to verify. We believe the true number to be much higher," UNICEF executive director Catherine Russell said in a statement.

Russell pointed to the deep distress that many children across Ukraine may be experiencing in the wake of violence, plus the devastation the war has brought on the country's education system.

"The start of the school year in just over a week’s time is a stark reminder of how much children in Ukraine have lost. Ukraine’s education system has been devastated by the escalation of hostilities across the country. Schools have been targeted or used by parties, resulting in families not feeling safe to send their children to school," she said Monday.

We estimate that 1 in 10 schools have been damaged or destroyed," she added.

Russia's blockade of Ukrainian ports pushed grain prices to record highs this year, with more than 20 million metric tons of wheat and corn trapped in the port city Odesa for months.

Amid a worsening global food crisis, Moscow and Kyiv signed a grain export deal brokered by the UN and Turkey in July. Since August 1, dozens of ships loaded with grain have left Ukraine's Black Sea ports.

On Thursday, UN Secretary-General António Guterres said there were signs that global food markets were beginning to stabilize in the wake of the agreement.

Here's a look at the fluctuation in wheat prices since the war began: 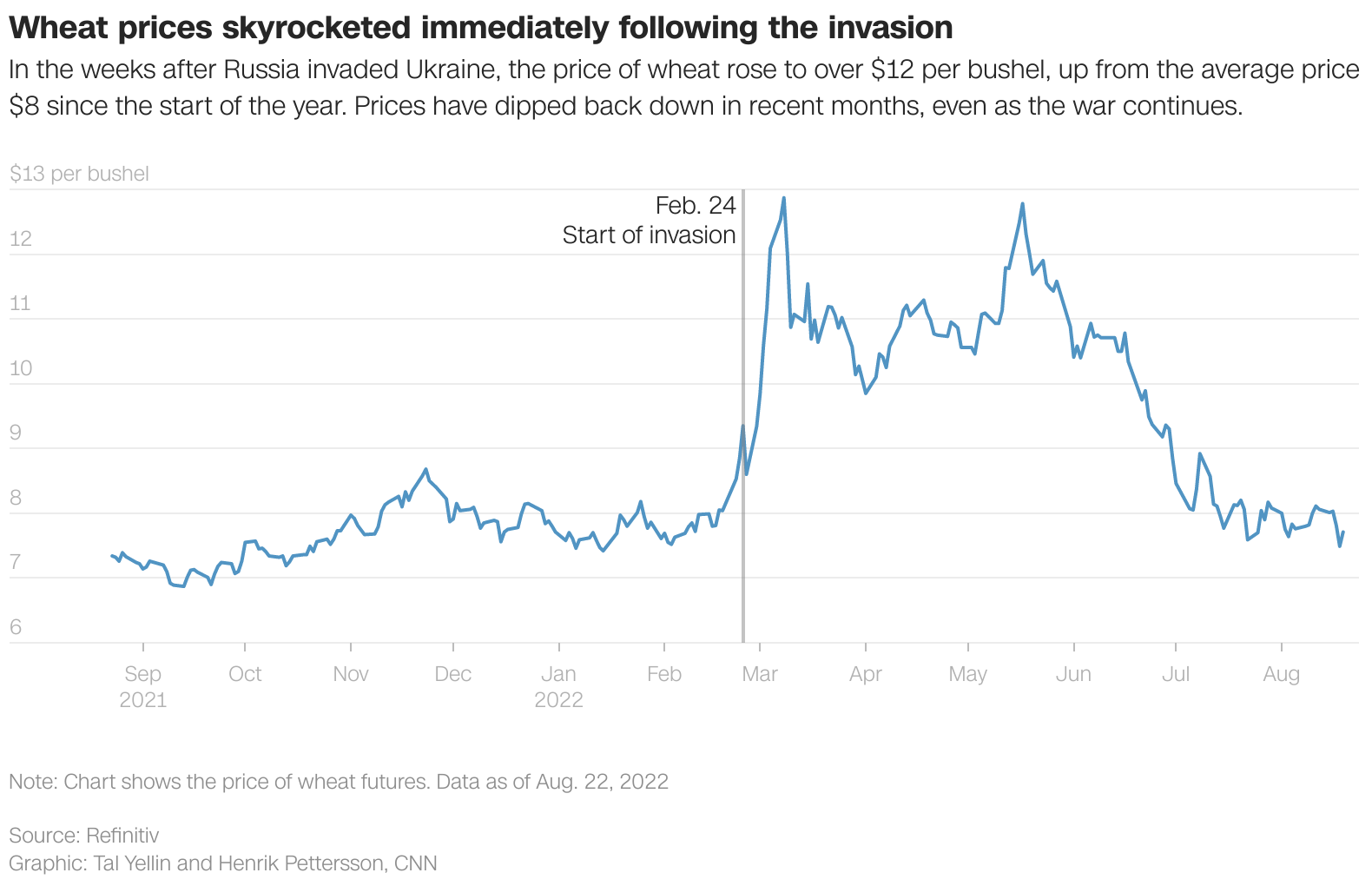 Six months have passed since Russian President Vladimir Putin launched his unprovoked invasion of Ukraine, a war that by any conventional measure has been a calamity.

Cost to Russia: By the Pentagon's latest reckoning, the invasion has cost Russia between 70,000 and 80,000 troops killed and wounded. Even if that estimate is on the high side, it's fair to extrapolate that Russia has probably seen more troops die in half a year's fighting in Ukraine than the Soviets lost over a decade of war in Afghanistan.

Public approval: But any comparisons of Putin's Russia to the waning days of the USSR are premature. The majority of Russians have — if not overtly — supported the war, or have silently acquiesced to his campaign of imperial restoration.

The Kremlin leader's ratings have been unaffected by the war. Both state pollster WCIOM and the independent polling agency Levada-Center routinely put Putin's approval ratings above 80% since February 24. A WCIOM survey in June found that 72% of Russians were likely to support Putin's "special military operation," the official euphemism for the war in Ukraine.

Censorship and support: Some of the numbers could reflect the power of Russia's state propaganda — and the government's swift censorship, shutting down the remnants of Russia's free press after the invasion.

But that doesn't mean no information is getting out about Russia's disastrous losses in Ukraine; it's just that the country's relatively well-off middle classes have likely been insulated from the war's toll.

The regions with the highest numbers of documented casualties are the poorer, so-called "ethnic republics" of Dagestan and Buryatia, according to the Russian independent news site Mediazona, which was labeled a "foreign agent" last year by Russian authorities

By contrast, casualties from Russia's two wealthiest and most populous cities — Moscow and St. Petersburg — have been relatively low, it reported.