A series of satellite images, from Planet Labs and the European Space Agency, show a fire and smoke near the Zaporizhzhia nuclear power plant in Enerhodar, Ukraine.

The three satellite images — which were taken on Aug. 24 at 10:39 a.m., 11:30 a.m. and 11:35 a.m. local time — show a rare sequential glimpse of a fire growing toward the south of the plant, and smoke rising from an ash pit located in the northern section of the complex.

The plant, which is held by Russian forces, was completely disconnected from the power grid for the first time in its history on Thursday, according to the country’s nuclear operator.

The complex was disconnected due to fires at nearby ash pits, causing the last remaining power line connecting to Ukraine’s energy grid to disconnect twice, Energoatom said in a statement.

The West's response through six months of Russia's war in Ukraine has remained strong and largely united — to the surprise of many.

The trans-Atlantic alliance managed to pull together to provide financial and weapons support to Kyiv, reach agreements to stop using Russian energy, and implement sanctions designed to hit President Vladimir Putin and his cronies.

However, as the war reaches its half-year mark, officials across Europe are worried the consensus could fall apart as the continent enters a bleak winter of rising food prices, limited energy to heat homes and the real possibility of recession.

Western officials and diplomats spoke to CNN on the condition of anonymity to candidly describe sensitive conservations among governments.

In a possible taste of more draconian measures to come, Berlin turned off the lights illuminating German monuments in order to save electricity, while French shops have been told to keep their doors shut while the air conditioning is on, or else face a fine.

Ukrainian President Volodymyr Zelensky, who has captured the West's imagination and put heat on countries to support his war effort, might find it harder to get the attention of his fellow European leaders as the conflict drags on.

"That may well be why Zelensky said he wanted the war over before Christmas, because the real issues will be getting the West to stick to its promises in the long run," said Keir Giles, a senior consulting fellow at think tank Chatham House.

The winter fuel crisis is something that European officials and diplomats are thinking about daily, with Russia accounting for about 55% of Europe's total gas imports in 2021.

European countries also have a thirst for Russian oil, with almost half of Russian oil exports going to the continent. The EU reportedly imported 2.2 million barrels of crude oil per day in 2021.

"Within the European Union, it will be very difficult and we must try to stick to our promise to cut off Russia when it comes to any profits from gas and other sources," according to a senior European diplomat, referring to a deal struck between the EU member states to cut their use of Russian gas by 15%.

However, the agreement has been criticized for being voluntary, and officials fear that when push comes to shove, some EU countries simply won't play their part.

Related: Read about Nord Stream 1 and Nord Stream 2 pipelines, which have been points of contention and sharpened the showdown between Russia and the West during this invasion.

A top US State Department official on Thursday warned that Russia’s actions at the Zaporizhzhia Nuclear Power Plant have increased risks of possible nuclear radiation release.

Russia has "created a serious risk of a nuclear incident, a dangerous radiation release that could threaten not only the people and environment of Ukraine, but also affect neighboring countries and the entire international community,” Undersecretary of State for Arms Control and International Security Bonnie Jenkins said.

Jenkins reiterated calls for Russia to cease its military activities around the plant. She also stressed the importance of the International Atomic Energy Agency being able to visit and inspect the facility. She did not provide any details on that visit, which the agency’s head on Thursday described as “imminent.”

Jenkins told reporters on a briefing call that she was unable to confirm reports that the plant had been disconnected from the grid, but said “we are very concerned about turning off any of the other power plants; we are very concerned about any of the activities that are taking place, particularly since we do not have adequate access to see what is actually taking place and what can be the immediate impact of what's going on there.”

Earlier Thursday, the last power line at the plant was disconnected twice, according to the state nuclear regulator in Ukraine. The Russian-installed governor of occupied areas of Zaporizhzhia said that the power supply to all cities and districts of the Zaporizhzhia region had been restored after earlier disruptions.

Jenkins would not say whether there were discussions taking place on how to mitigate a potential nuclear catastrophe at the plant.

Intensified shelling around Russian-occupied Zaporizhzhia nuclear power plant — Europe's largest — has sparked concerns around the world, prompting a demand for damage assessment on the site.

Normally, the plant has four lines that connect it to the Ukrainian power system, but three of them were damaged and only one remains, according to Energoatom CEO Petro Kotin, who spoke to CNN on Monday. Energoatom is a Ukrainian state enterprise operating all four nuclear power stations in Ukraine.

"If this line is also damaged, then we will have blackouts more through the whole plant," he said.

This establishes how critical that last power line and its operation is.

So it concerning when Ukrainian nuclear authorities claimed that the last power line was disconnected twice on Thursday. It has now been restored according a Russian-backed official.

Remember: CNN spoke to Kotin on Monday, prior to the reports of the last line being disconnected twice.

Kotin explained that there are diesel generators as backup to cool the fuel and keep things operational, but there are caveats to using that backup for an indefinite time. Kotin called this a "dangerous" situation to be in.

"For cooling of the fuel, we will use diesel generators to supply power to those cooling pumps, and that is a very dangerous situation, because you cannot rely only on diesel generators, because they need fuel for their work," he explained.

"Reliability questions could be an issue ... because in this case, they could be required to work for an indefinite time, and they have limited capacity to constantly be in work mode," he added.

The damaged lines cannot be restored or maintained at the moment because the location is under constant fire and that could put the workers' lives in danger, Kotin noted.

He claimed that Russians are disconnecting the remaining line from the Ukrainian power system "intentionally," and alleged that their aim is to "reconnect it to Russian system."

However, that won't be possible without a full shutdown of the plant and a full cut of all lines which are connected to the Ukrainian system, he said.

Russian President Vladimir Putin on Thursday signed a decree to increase the size of Russia's armed forces from about 1.9 million to 2.04 million.

According to a decree published on the Russian portal of legal information, the number of military personnel will increase to 1.15 million, adding 137,000 service personnel.

Power supply to all cities and districts of the Zaporizhzhia region has been restored after earlier disruptions, according to the Russian-installed governor of occupied areas of Zaporizhzhia.

"As a result of a strike by the armed formations of Ukraine on power lines in the area of the Zaporizhzhia NPP, the territory of the security zone of the 750 kV overhead line caught fire. The fire was provoked by a short circuit on power lines," Yevhen Balytskyi claimed.

"The relay emergency protection of ZNPP worked, two power units were turned off, after which the Zaporizhzhia region was left without power supply," he added.

"Immediately after the fire was extinguished, one unit was put into operation. Work was underway to restore the power supply to the region and launch the second power unit," he explained.

The Zaporizhzhia nuclear power plant has six reactors, but only two are operational at the moment.

A power line from the nuclear power plant in Zaporizhzhia was disconnected as a result of hostilities in the area, the state nuclear regulator in Ukraine said.

As a result, one of the nuclear power units at the plant had also been disconnected, according to the State Inspection of Nuclear Regulation, which quoted the nuclear operator Energoatom.

After being restored once, the 750 kV "Dniprovska" overhead line was disconnected again, the regulator said in a Telegram post, adding that this also affected the second power unit again due to "the subsequent tripping of the emergency protection."

"The actions of the invaders caused a complete disconnection of the ZNPP from the power grid - the first in the history of the plant," it added.

It is unclear whether there is currently any disruption to the power supply at the plant. CNN has previously been told that there are 18 diesel generators at the plant as back-up sources of power to the reactors.

The Russian state news agency RIA Novosti reported there had been "a short circuit in the network after shelling by Ukrainian troops and fires in Enerhodar [which] caused a blackout in the Zaporizhzhia region."

CNN has confirmed the disruption of electricity supplies to Melitopol, which is Russian occupied territory.

“The President of the Republic reiterated his support for the deployment of an IAEA expert mission to the Zaporizhzhia nuclear power plant as soon as possible to address nuclear safety and security issues and safeguards, while respecting Ukraine's full sovereignty over its territory and infrastructure,” the Élysée said.

“(Macron) confirmed that the Director General could count on France's support to ensure that the IAEA mission would have safe and unhindered access to the plant and could carry out its mission without interference,” the statement said.

The French president praised Grossi’s efforts in the past few months to ensure the security of nuclear power plants in Ukraine. His comments also come after shelling intensified around the massive Zaporizhzhia plant, Europe's largest, which has been under Russian control since March.

CNN previously reported that Russian President Vladimir Putin agreed for a mission from the IAEA to access the plant via territory controlled by Ukrainian forces during a call with Macron last week, according to a source from the Élysée Palace.

Some context: Both Ukraine and Russia have blamed each other for security and military action at and around the plant. The lack of independent access to the plant makes it impossible to verify what is happening there. Over the past month, a number of rockets and shells have landed on the territory of the plant, according to satellite imagery analyzed by CNN.

International inspectors are close to agreeing a deal with Russia to visit the Zaporizhzhia nuclear power plant, while concern is growing over planned trials of Ukrainian prisoners of war in the occupied city of Mariupol. 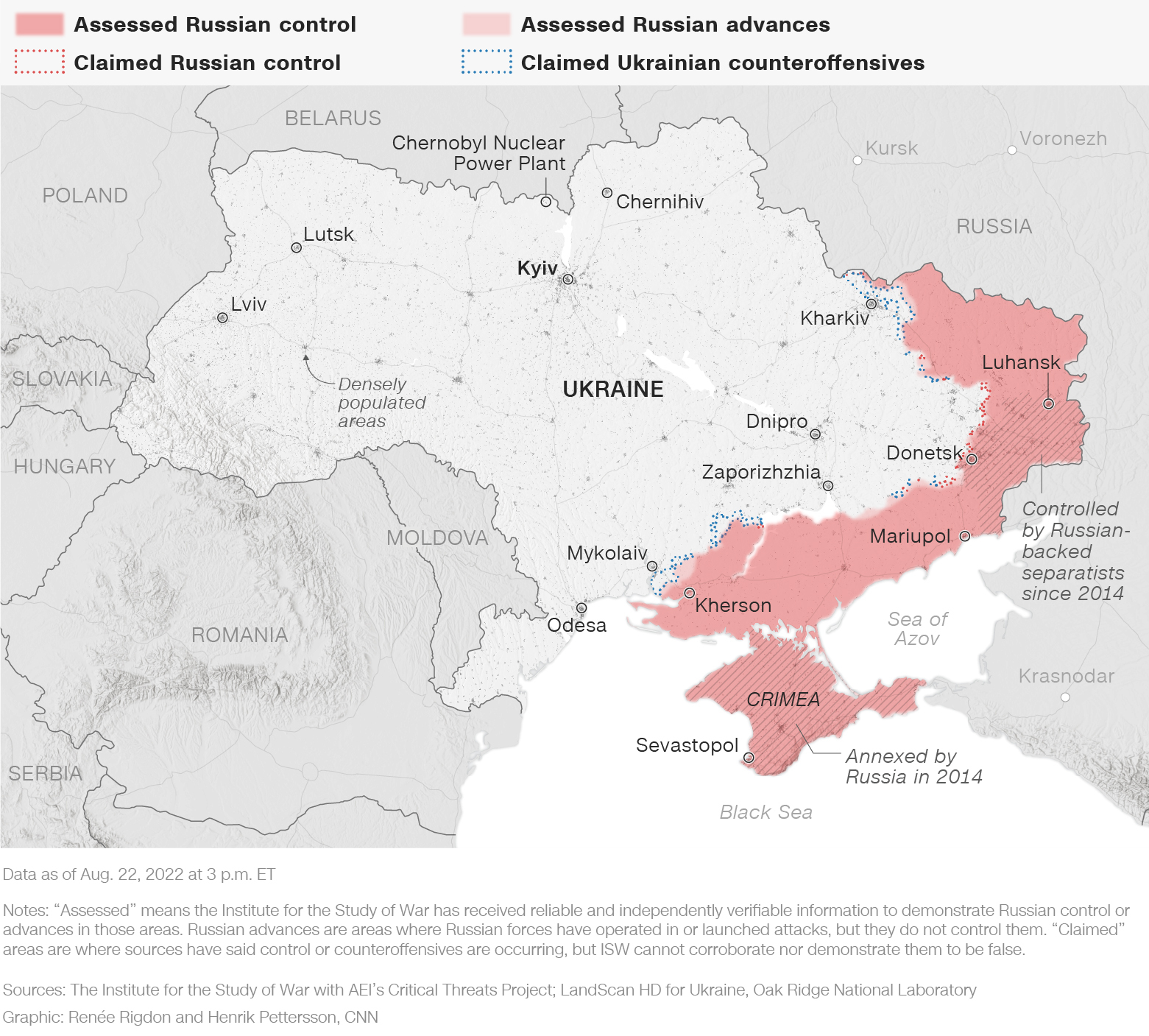