Tensions continue to rise over concerns at the Russian-controlled Zaporizhzhia nuclear power plant. Both Ukraine and Russia have blamed each other for security and military action at and around the plant. The lack of independent access to the plant has made it impossible to verify what is happening on the ground there.

Here are the the top headlines to know: 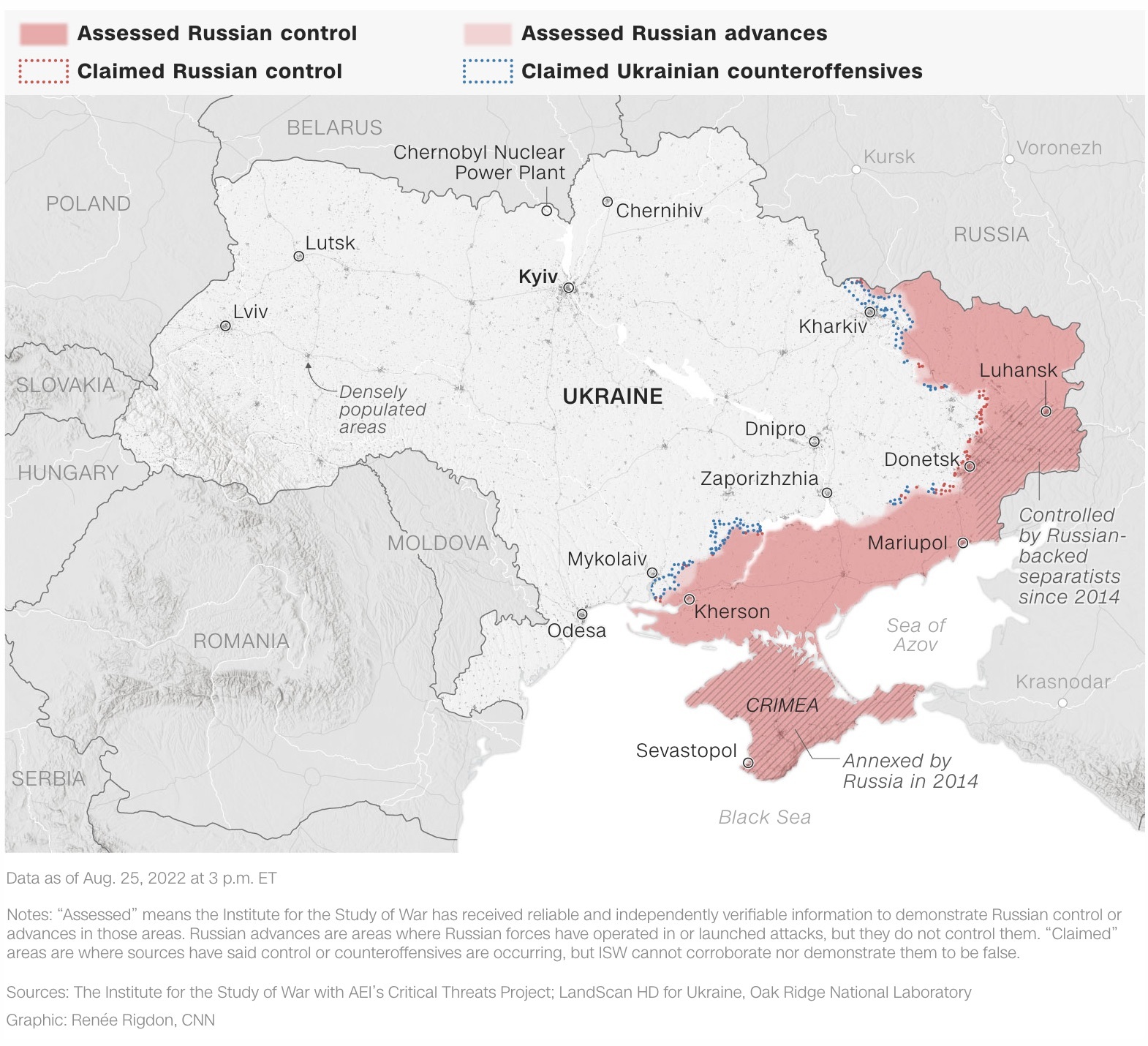 “Today, for the first time in history, the Zaporizhzhia nuclear power plant stopped,” Zelensky said in his nightly address Thursday.

“The emergency protection of the power units worked — after the last working line of the plant's power return to the Ukrainian power system was damaged by Russian shelling," he said.

CNN is unable to verify who is responsible for the shelling, as both sides have accused the other.

There were originally four power lines supplying electricity to the plant, three were out of action due to the ongoing fighting around the facility. The last remaining power line supplying electricity to the plant went offline today, requiring the diesel generators to be used. The power on the last remaining line has since been restored as of Thursday evening.

“The world must understand what a threat this is: If the diesel generators hadn’t turned on, if the automation and our staff of the plant had not reacted after the blackout, then we would already be forced to overcome the consequences of the radiation accident,” Zelensky said.

The generators are installed to supply power to cooling pumps to stop the fuel from overheating in the event of a blackout, but are not fully reliable, the CEO of Energoatom, Ukraine’s state energy operator, Petro Kotin, told CNN on Monday.

“Russia has put Ukraine and all Europeans in a situation one step away from a radiation disaster,” Zelensky alleged.

The International Atomic Energy Agency and other international bodies “must work much faster than they’re acting now” he said, “because every minute the Russian troops stay at the nuclear power plant is a risk of a global radiation disaster.”

More background: The Zaporizhzhia nuclear power plant is currently not supplying electricity to Ukraine — it is off the grid — however, the reactors need to continue to receive electricity so they can safely operate and avoid a nuclear accident.

The reactors must have backup power supplies so that the systems that provide cooling for spent fuel elements and cooling of residual heat produced in shut down reactors continue to work safely. The electricity to the plant is also needed for maintaining services such as lighting, and ventilation to the reactor.

The Joint Coordination Center (JCC) announced in a statement a new shipping route under the Black Sea Grain Initiative that will come into effect on Friday.

The JCC — which has representatives of Ukraine, Russia, Turkey and the United Nations — was one of the key creations of the grain deal agreed between Russia and Ukraine brokered by the UN and Turkey.

The new shipping route is 320 nautical miles long, and "it allows for shorter transit in the maritime humanitarian corridor and easier planning for the shipping industry," according to the statement.

The route is intended for "merchant vessels going in and departing from the three Ukrainian ports of Odesa, Chornomorsk, Pivdennyi/Yuzhny," and it connects the ports to inspections areas inside Turkish waters, the statement added. No military ship, aircraft or drone can approach a vessel going through the corridor within a radius of 10 nautical miles.

As of last week, about 27 ships loaded with grain have left Ukraine’s Black Sea ports since Aug. 1, according to Turkey. More than 650,000 metric tons of grain and other food have gone to markets around the world, according to UN Secretary-General António Guterres.

Ukrainian President Volodymyr Zelensky spoke with US President Joe Biden on Thursday by telephone, according to the presidential office of Ukraine.

Zelensky expressed his “gratitude” for the latest $6 billion package of security and financial assistance the US committed to Ukraine on Wednesday, calling it “the best gift for Ukraine on its Independence Day," according to Ukraine’s official read out of the call.

According to the read out of the call, that assistance package includes $3 billion in defense aid, and an additional $3 billion of financial aid.

“These modern air defense systems will help us protect our cities from missile terror," Zelensky said.

The US has shown “leadership” in providing further macro-financial support, Zelensky went on to say, with half the package (which adds up to $3 billion) to be channeled through the World Bank.

Additionally, both leaders “concurred on the need” to return the control of the Zaporizhzhia nuclear power plant to Ukraine, and for the occupying Russian forces to allow access by the International Atomic Energy Agency.

The US State Department's principal deputy spokesperson Vedant Patel said Thursday that any attempt to disconnect the Zaporizhzhia nuclear power plant from the Ukrainian power grid and redirect it to Russian-occupied areas is "unacceptable.”

“It is clear that Russia's shelling and seizure of Ukraine's power plants and infrastructure are part of its strategy to create energy crises in Europe. We strongly condemn any action at ZNPP or elsewhere that impacts the health and welfare of civilians throughout the region,” Patel said during a briefing call with reporters.

“No country should turn a nuclear power plant into an active war zone, and we oppose any Russian efforts to weaponize or divert energy from the plant,” he continued. “To be very clear, ZNPP and the electricity that it produces rightly belongs to Ukraine.”

Patel said the United States is “closely monitoring the reports the last two operational reactors that ZNPP has been shut down,” and noted that “Ukraine is reporting that all the plant’s safety and security systems are working normally and we have no indication of increased or abnormal radiation levels.”

The International Atomic Energy Agency said the power supply from the Russian-occupied plant has been restored, but it currently remains disconnected from Ukraine’s energy grid.

The power supply from the Russian-occupied Zaporizhzhia nuclear power plant has been restored, the United Nations' nuclear watchdog said Thursday, but it currently remains disconnected from Ukraine’s energy grid.

In a statement, the International Atomic Energy Agency said it had been informed by the Ukrainian government that the plant’s last remaining operational 750 kV external power line is back up and running after disconnecting twice due to fires nearby. This would confirm an earlier statement from the Russian-installed governor of the occupied Zaporizhzhia areas.

However, the two remaining operational nuclear reactors “remained disconnected from the grid” after the power line was restored, Ukraine said, according to the IAEA.

“Ukraine also informed the IAEA that as a result of the cuts in the 750 kV power line, the ZNPP’s two operating reactor units were disconnected from the electricity grid and their emergency protection systems were triggered, while all safety systems remained operational, the Director General [Mariano Grossi] said. All six units remained disconnected from the grid also after the power line was restored, Ukraine said,” according to the statement.

The Russian-installed governor, Yevhen Balytskyi, earlier claimed: "Immediately after the fire was extinguished, one unit was put into operation. Work was underway to restore the power supply to the region and launch the second power unit."

“There was no information immediately available on the direct cause of the power cuts," the IAEA said.

“The six-reactor ZNPP normally has four external power lines, but three of them were lost earlier during the conflict,” it added.

US President Joe Biden restated his support for Ukraine in a call with Ukrainian President Volodymyr Zelensky on Thursday and congratulated the country after it commemorated its Independence Day on Wednesday, according to White House press secretary Karine Jean-Pierre.

"The President reiterated the United States support for Ukraine as they defend themselves from Russian aggression, including yesterday's announcement of nearly $3 billion in weapons and equipment. He congratulated Ukraine as it marked a particularly significant Independence Day this week and shared his admiration for the people of Ukraine and its armed forces, as they continue to inspire the world with their dedication and freedom," Jean-Pierre said.

While not delving into any details, Jean-Pierre noted that Biden and Zelensky did discuss the situation at the Russian-controlled Zaporizhzhia nuclear power plant, reiterating the administration's position that the area should not be an active war zone.

A senior administration official also told CNN that the administration is "closely monitoring" the situation and that the plant and its power belongs to Ukraine, condemning any attempts to redirect power from the plant.

She noted a more detailed readout of the call would come later today.

Zelensky also tweeted about the call:

The United Nations on Thursday called on all parties to ”respect their obligations under international humanitarian law and take constant care to spare civilians and civilian infrastructure,” following recent shelling on several cities in Ukraine, UN spokesperson Stephane Dujarric said.

“As you know, there has been intense shelling on frontline cities, including Nikopol and Zelenodolsk, in Dnipropetrovska oblast, where hostilities have left a path of destruction, with dozens of houses damaged, as well as shops, schools and pharmacies. This includes the strikes that killed and injured civilians yesterday close to the rail station in Chaplyne, in central Ukraine, which was especially concerning,” Dujarric told reporters in New York.

Ukrainian officials said at least 25 people were killed in the Russian attack on the Chaplyne train station on Wednesday.

Meanwhile, Dujarric said that UN Humanitarian Coordinator Denise Brown “has started a three-day mission to eastern and central Ukraine to see first-hand the humanitarian impact of the war and efforts undertaken by humanitarian organizations in the country to support the people affected."