A team of UN nuclear inspectors from the International Atomic Energy Agency (IAEA) has arrived at the Zaporizhzhia nuclear power plant, in southeastern Ukraine, despite nearby shelling.

IAEA chief Rafael Grossi said the some members of the agency plan to stay at the plant until Saturday, but will continue to have a permanent presence of some kind at the facility, where constant fighting has sparked fears of a nuclear accident.

Here are the top headlines: 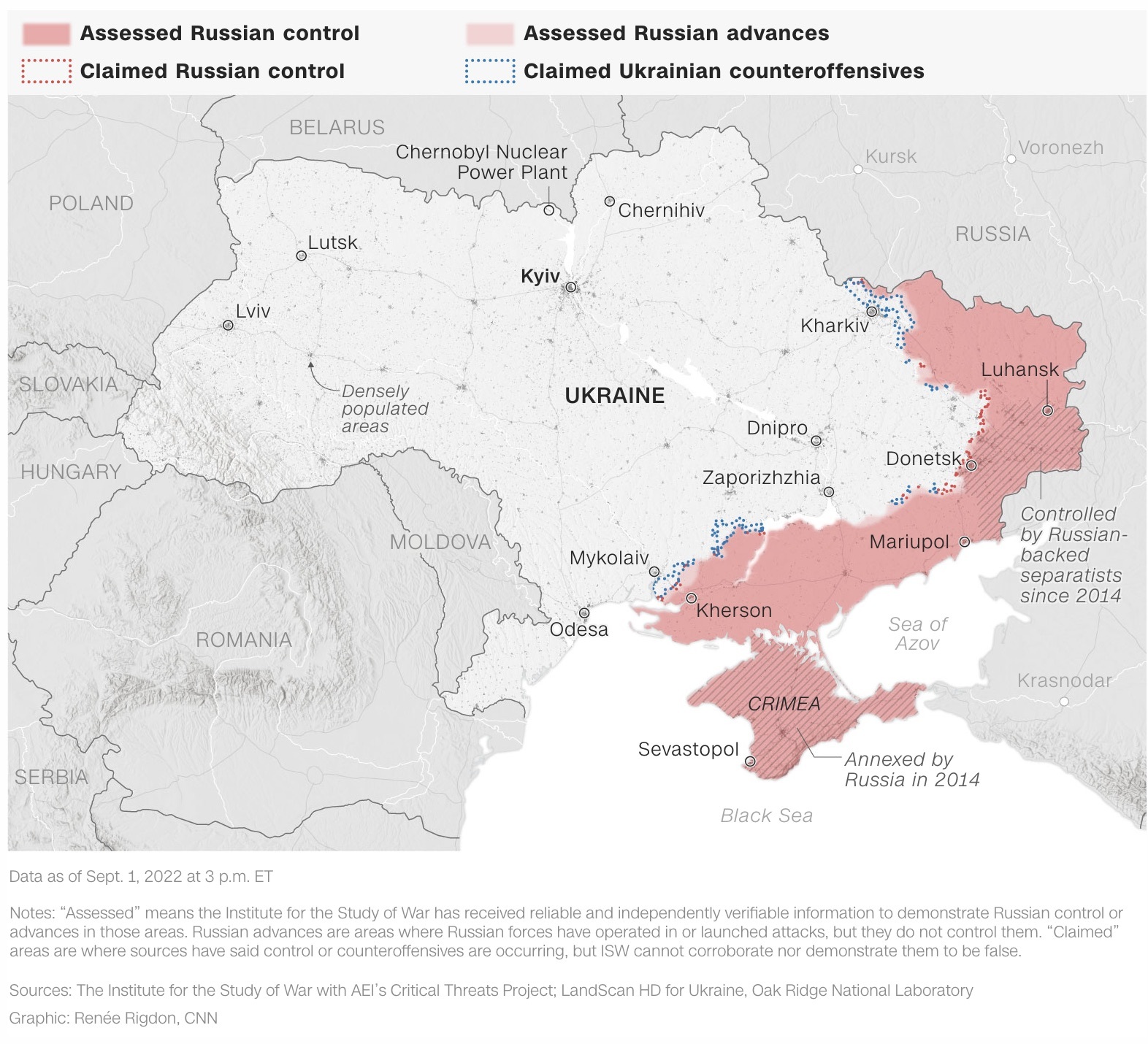 Ukrainian President Volodymyr Zelensky welcomed the visit by the International Atomic Energy Agency to the Zaporizhzhia nuclear plant on Thursday, despite what he called "all the provocations of the Russian military" on the city of Enerhodar and at the station.

In his daily video message, Zelensky said it was "bad that the occupiers are trying to turn this IAEA mission — which is really necessary — into a fruitless tour of the station. I trust that this will not be allowed to happen."

"We have specific information that Russia has done a lot of cynical things in order to deceive the [IAEA] mission, including intimidation of the Enerhodar city residents. The occupiers [force] people to lie to the IAEA representatives," he added.

Zelensky also claimed that an agreement to allow independent journalists to accompany the IAEA delegation was not upheld.

He also stressed again that the area around the plant should be demilitarized.

The Ukrainian military says the situation in the eastern Donetsk region is virtually unchanged, despite weeks of efforts by Russian forces and their allies in the Donbas militias to take new territory.

Russian President Vladimir Putin's declared objective is to take all of the regions of Donetsk and Luhansk, but Ukrainian forces still control more than one-third of Donetsk.

The Ukrainian military's General Staff said Thursday that once again the Russians had tried to attack in several directions, towards the city of Sloviansk and the towns of Bakhmut and Avdiivka.

In each instance, the General Staff said, Russian forces had been unsuccessful and had withdrawn.

It spoke of heavy attacks with tanks, artillery and mortars in the south where Ukrainian forces are trying to weaken Russian defenses.

According to the General Staff, the Russians had fired on 15 settlements in the region, mostly along the borders of Mykolaiv and Kherson regions, which have been an active front line for more than two months.

The Ukrainian military says it is keeping up the pressure on Russian forces in the southern Kherson region, with attacks on several targets Thursday, including bridges across the Dnipro river.

"An attempt to establish a new pontoon crossing in the Dariivka area was also cut down by our fire," it said.

It added that fire against the Kakhovskyi Bridge left several additional holes, which meant it remained unusable to occupying forces.

Ukrainian forces have focused in the last two months on degrading Russian supply lines, ammunition depots and rear bases in the south.

Britain’s Chancellor of the Exchequer Nadeem Zahawi said on Thursday that he is hopeful that G7 ministers will agree on Friday to a price cap scheme for Russian oil exports.

Speaking at an event organized by Washington, DC-based think tank American Enterprise Institute, Zahawi said the primary reason he was in the US was “to get this oil price gap over the line.”

“We have an important meeting tomorrow with the G7 finance ministers, and I'm hopeful we'll be able to have a statement that will mean that we can move forward at pace to deliver this oil price cap,” he said.

Some background: Russia’s government is making just as much money from energy exports as it was before its invasion of Ukraine. Meanwhile, inflation is surging globally.

With price caps, barrels of Russian oil could theoretically still make their way onto the global market, thereby avoiding a further supply crunch — but Moscow wouldn’t be able to keep raking in hefty profits.

International Atomic Energy Agency (IAEA) chief Rafael Grossi said he and his team went to inspect the Zaporizhzhia nuclear power plant Thursday despite shelling near the plant earlier in the day.

“Having come this far, I was not going to stop and with my courageous team we moved in. There were moments where fire was obvious,” Grossi told reporters.

“Heavy machine gun artillery, mortars two or three times were really pretty concerning, I would say, for all of us. We had splendid support from the United Nations Security team that is here with me as well. So I think we showed that the international community is there, could be there and we are continuing this," he added.

Grossi's remarks come as Ukraine accused Russian forces of trying to disrupt the IAEA visit to the nuclear plant by shelling in the city of Enerhodar near the facility early Thursday.

“I worry, and I will continue to be worried about the plant until we have a situation which is more stable, which is more predictable. It is obvious that the plant and the physical integrity of the plant has been violated several times by chance [and] by deliberation,” Grossi told reporters after his visit to the plant.

“Wherever you stand, whatever you think about this war. This is something that cannot happen and this is why we are trying to put in place certain mechanisms and the presence,” he added.

Rafael Grossi, the chief of International Atomic Energy Agency, said Thursday that the United Nations' nuclear watchdog is “not going anywhere” and will have a “continued presence” at the Zaporizhzhia nuclear plant.

“We are not going anywhere. The IAEA is now there at the plant and it's not moving. It's going to stay there. We're going to have a continued presence there at the plant,” Grossi said while speaking to reporters following a visit to the plant.