The recovered body of British aid worker Paul Urey, who was captured in the self-proclaimed Donetsk People’s Republic (DPR) and died in the custody of Russian-backed separatists, has signs of “possible unspeakable torture,” Ukrainian Foreign Minister Dmytro Kuleba said Thursday.

“Russians have returned the body of a British humanitarian worker, Paul Urey, whom they captured in April and reported dead due to ‘illnesses’ and ‘stress’ in July (and the body shows) signs of possible unspeakable torture," Kuleba tweeted, promising to identify the perpetrators of the crime and “hold them to account.”
"Detaining and torturing civilians is barbarism and a heinous war crime,” Kuleba added.

CNN cannot independently confirm Kuleba's claims and has not reviewed autopsy reports relating to his death.

Urey – who was from Warrington, Cheshire – was captured in April and accused of being a mercenary.

Russian-backed officials reported him dead due to “chronic diseases” and “stress” in July; he was 45 years old.

Urey suffered from a number of health conditions, including diabetes, his friend Lex Roberts told CNN.

The DPR’s ombudsperson Daria Morozova claimed Urey was “provided with appropriate medical assistance” while held in the separatist-held region.

The foreign office summoned Russia’s Ambassador to the UK Andrei Kelin after learning of Urey’s death.

In a statement, UK Prime Minister Liz Truss – who was foreign minister at the time of Urey's capture – said Urey had been carrying out “humanitarian work” to “try and help the Ukrainian people.��

“The Russian government and its proxies are continuing to commit atrocities. Those responsible will be held to account. My thoughts are with Mr Urey’s family and friends at this horrendous time,” Truss said.

Ukraine told a United Nations Security Council meeting on Wednesday that 2.5 million people have been forcefully deported from the country as part of a Russian "filtration" scheme in which many are being tortured and killed.

Deputy Ukrainian Ambassador to the UN Khrystyna Hayovyshyn told the Security Council that thousands of Ukrainian citizens are being forcefully deported to “isolated and depressed regions of Siberia and the far east."

Among the 2.5 million people deported so far, said the ambassador, were 38,000 children -- many of whom had been ripped from the arms of their parents.

The Russian authorities are terrorizing those it deports under the pretense of searching for "dangerous" people, the ambassador said, disappearing people affiliated with the Ukrainian government or media and those with political views deemed objectionable.

The comments came as the US Ambassador to the United Nations Linda Thomas-Greenfield described Russian “filtration operations” as “horrifying.”

“A growing number of eyewitnesses and survivors of 'filtration' operations tell stories of threats, harassment, and incidents of torture by Russian security forces. They’ve had their biometric data captured, identification documents confiscated, and all means of communication cut off. They’ve been subject to invasive searches, interrogation under inhumane and demeaning circumstances. It really is horrifying,” Thomas-Greenfield told reporters outside the UN Security Council chamber.

But Russian Ambassador to the UN Vassily Nebenzia told the Security Council that newcomers go through “registration,” not filtration, procedures.

Nebenzia said it was unfortunate that human rights groups were making what he described as unfounded allegations against Russia.

"We have wasted time" discussing this issue, he said.

Shelling on Tuesday damaged a backup power line that would supply Ukraine’s Zaporizhzhia nuclear power plant in case of emergency, according to the International Atomic Energy Agency (IAEA).

“Of the three back-up lines between the (Zaporizhzhia nuclear power plant) and the thermal power station, one is now damaged by shelling, while the two others are disconnected, senior Ukrainian operating staff informed IAEA experts present at the plant since last week,” the IAEA said in a statement.

The Zaporizhzhia nuclear power plant has been held by Russian forces since early March, but is still operated by Ukrainian staff. The IAEA director general visited the power plant last week, and two IAEA experts stayed to maintain a permanent presence at the plant.

The IAEA said the shelling damage did not “have an immediate impact” on the plant, because the electricity line was not connected to the grid at the time.

Ukraine is considering shutting down the Zaporizhzhia nuclear power plant due to the deteriorating security situation, said Oleh Korikov, the chief state inspector for nuclear and radiation safety of Ukraine.

If conditions requiring the plant to be shut down arise, the plant and power unit No. 6 will be shut down,” Korikov said on Wednesday.

Zaporizhzhia is the largest nuclear power station in Europe.

"The continued deterioration of the situation, the prolonged lack of power supply from an external source of electricity will force us to deploy standby diesel generators, and it is extremely difficult to top up the diesel fuel supply during the war,” Korikov added.

Korikov said maintaining the diesel generators running would not be sustainable.

For context: In an interview last month, Energoatom CEO Petro Kotin explained why diesel generators are not a sustainable alternative.

Diesel generators are backups to cool fuel and keep things operational, but there are caveats to using them for an indefinite time and it's a "dangerous" situation to be in, he explained.

"Reliability questions could be an issue ... because in this case, they could be required to work for an indefinite time, and they have limited capacity to constantly be in work mode," Kotin added.

Korikov's concerns are along the same lines as tensions continue at the plant.

“Four huge diesel fuel tanks are needed per day,” Korikov explained. “Potentially, we can find ourselves in a situation with no diesel fuel; it can give rise to an accident, damaging the active zone of reactors and releasing radioactive products into the environment. It will not only affect the territory of Ukraine but also produce cross-border effects.”

Currently, the plant “generates electricity and supplies it for its own needs” through an exceptional process called islanding where the plant — although disconnected from a power grid — uses its own energy to power cooling systems, according to Korikov.

One week into a new counteroffensive, Ukrainian forces are making gains in the south, with the ambitious goal of taking back most of the Russian-occupied region of Kherson by the end of the year, senior US officials and Ukrainian officials tell CNN.

The last week has seen the most ambitious ground assaults by the Ukrainians since the beginning of the invasion, following sustained attacks on command posts, ammunition stores, and fuel reserves far behind the front lines, according to geolocation of video and satellite imagery.

The US has observed Ukrainian forces achieve some success in attacking Russian supply lines, with the intention of cutting off and isolating Russian troops currently deployed west of the Dnipro River, according to a senior US official.

“What we’ve seen in the Kherson region first is some continued offensive operations by the Ukrainians,” Pentagon press secretary Air Force Brig. Gen. Pat Ryder told reporters. “They continue to make some forward movement. We are aware that they have retaken some villages.”

Ryder also said that the US has seen “some offensive Russian activity … near Bakhmut.”

According to Ukrainian officials, the goal is to take at least all territory north or west of the Dnipro River, including not only the city of Kherson but also Nova Kakhovka, site of an important hydroelectric plant as well as the canal that supplies Crimea with much of its water.

The current offensive in the south is broad-based – extending more than 100 miles wide – to prevent Russian units from concentrating on one point. Additionally, there has been an uptick in sabotage operations and attacks on pro-Russian officials in occupied areas.

US officials acknowledge the Ukrainian goal of recapturing Kherson by the end of 2022 is ambitious but remains possible if Ukraine continues to make progress in its current operations. 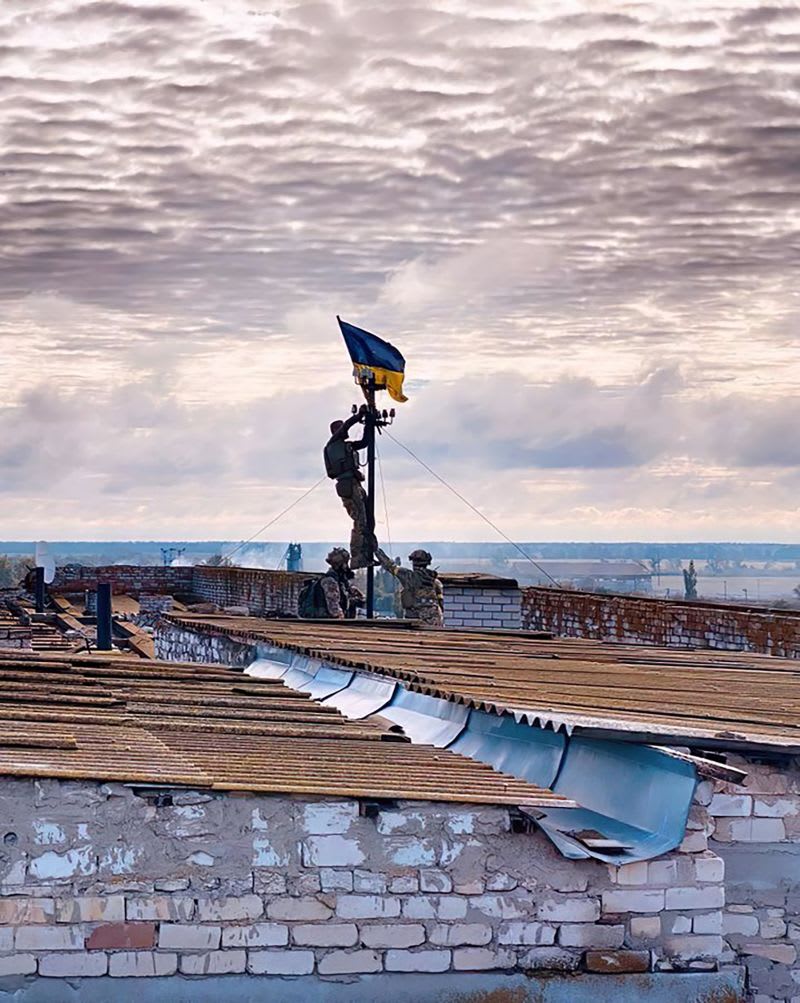 Ukrainian forces aim to retake Kherson by year's end as gains made in South, US and Ukrainian officials say | CNN Politics

Russia has “lost nothing” in its “special military operation” in Ukraine, President Vladimir Putin said Wednesday in a speech to open the Eastern Economic Forum in Vladivostok.

We have lost nothing and are not going to lose anything. Our main gain is the strengthening of our sovereignty. We didn't start anything, in terms of military action, but are only trying to finish it,” Putin told the audience.

Putin's claim comes despite two US officials telling CNN last week that the United States believes Russia is facing "severe" shortages of military personnel in Ukraine and is seeking new ways to beef up its troop levels.

It also comes despite a statement by UK Defense Secretary Ben Wallace on Monday that claimed “over 25,000 Russian soldiers have lost their lives” since the start of the war.

In late August, Putin ordered Russia’s military to increase its overall number of troops by 137,000. It remains unclear how it intends to reach that target.