Our live coverage has ended. Read more of CNN's coverage of Russia's war in Ukraine here.

The war appears to be entering a new phase after Ukraine dealt a big blow to Russia's grip on parts of the east with a fast-moving offensive that saw Ukrainian troops enter the strategic city of Izium after five months of occupation.

"Russians escaped and left weapons and ammo behind. City center is free," a spokesperson for the Bohun Brigade of the Land Forces of Ukraine said in a statement Saturday afternoon.

Many areas of Ukraine’s second largest city, Kharkiv, in the eastern part of the country, are experiencing a power blackout following a Russian strike, the city mayor’s said Sunday.

Following a strike on an infrastructure facility in Kharkiv, “power was lost in many areas of the city. For the same reason, there is no water in the same areas - pumps do not work," Mayor Ihor Terekhov said via Telegram.

The Kharkiv mayor went on to describe the strike as “a vile and cynical revenge of the Russian aggressor for the successes of our army at the front, in particular in the Kharkiv region.”

Terekhov also urged everyone to remain calm, saying that “our specialists and public utility workers are already working to eliminate the damage that our enemy inflicted on the city.”

CNN has not independently confirmed the strike.

French President Emmanuel Macron reiterated his demand for a ceasefire in Ukraine and Russian withdrawal from the Zaporizhzhia nuclear power plant during a phone call with Russian President Vladimir Putin, the Elysee Palace said Sunday.

Macron “condemned the continuation of Russian military operations in Ukraine and reiterated his demand that they cease as soon as possible, that negotiations begin and that the sovereignty and territorial integrity of Ukraine be restored,” his office said in a statement.

The French president “also stressed the need to ensure the safety of the Zaporizhzhia nuclear power plant. He recalled that the Russian occupation was the cause of the current risks to the integrity of the Zaporizhzhia NPP. He called for Russian forces to withdraw their heavy and light weapons from the plant and that the IAEA's recommendations be closely followed to ensure the safety of the site be restored,” the Elysee said.

Some more context: Zaporizhzhia is the site of the largest nuclear plant in Europe, and the facility sits on the fire line between the Russian occupiers and Ukrainian forces.

The Elysee added that Macron “will speak again to President Putin in the next few days in order to reach an agreement that guarantees the safety of the Zaporizhzhia nuclear power plant.”

On the issue of global food security, Macron told Putin that European sanctions against Russia do not apply to agricultural products. He also asked the Russian leader to ensure that the Ukraine grain export agreement between Russia, Ukraine and Turkey, under the supervision of the United Nations "to ensure that the exported grain goes to those who need it most.”

In an exclusive interview airing Sunday, CNN's Fareed Zakaria spoke to Ukrainian President Volodymyr Zelensky about Ukraine's counteroffensive against Russia in the southern and eastern parts of the country.

In a statement Sunday, the Ukrainian military's general staff said that Russian forces had abandoned the town of Svatove in Luhansk region, a town that until Saturday was still 40 kilometers (25 miles) beyond the known front line of the Ukrainian advance.

Svatove has been an important hub on Russian resupply routes to the front lines further south - along the borders of Donetsk and Luhansk regions.

"The occupiers have abandoned Svatove in Luhansk region," the general staff's office said in a Facebook post. "They rushed away in four Kamaz trucks, twenty Tigr AVs [armored vehicles] and stole over 20 cars of local residents."

The general staff's office also claimed that "as a result of the successful counteroffensive of our troops in the Kharkiv direction, the Russian troops frantically leave their positions and flee with the loot deep into the temporarily occupied territories or into the territory of the Russian Federation."

It referred to one alleged episode in which, it said "150 service members of the armed forces of the Russian Federation left in a convoy from Borshchova and Artemivka of the Kharkiv region on two buses, one truck and 19 stolen cars."

Borshchova is to the north of Kharkiv city, just a few kilometers from Ukraine's border with Russia.

As a Russian retreat in the Kharkiv region continues, a senior Ukrainian official has said that more than 40 settlements have now been liberated.

Roman Semenukha, Deputy Head of the Kharkiv region military administration, told Ukrainian television: "We can officially announce the liberation of more than 40 settlements. The situation is changing incredibly quickly and there are many, many more such [de-occupied] settlements."

Semenukha said the 40 referred only to those places where the situation was completely under control, and there were more where the Ukrainian flag had been raised.

Semenukha said it was wrong to suggest the Russians were simply leaving. "There are fierce, fierce battles in many areas of the front and everything is very, very difficult. If we are talking about the military component, then you just have to be patient," he said.

Local officials in the Kharkiv region say the Ukrainian flag has been raised in settlements close to the Russian border, confirming the continuing retreat of Russian forces in the area.

Oleksandr Kulik, an official in Derhachi northeast of the city of Kharkiv, said that the Ukrainian flag had been raised by local residents in the town of Kozacha Lopan.

Kozacha Lopan had been occupied by the Russians since March and was an administrative center for occupation authorities. It is five kilometers from the Russian border and has been extensively damaged during the conflict.

Social media video provided by the Derhachi city council also showed residents of another settlement — Tokarivka — raising the Ukrainian flag there. Tokarivka is also close to the Russian border.

Viktoriya Kolodochka, the head of the Tokarivka district, said Sunday: "The village was de-occupied this morning. People heard the roar of Russian military hardware. The Russians began to gather on their own in the morning and began to flee."

Kolodochka, who is not in the town but maintains contacts there, told CNN by phone that the Russians had left a lot of ammunition behind.

She also spoke of the months under occupation, which she described as "very scary." She said the occupying troops were from the Luhansk People's militia, who she said behaved like gangsters. They searched for people who had been in the security forces, confiscated phones and ransacked houses. She alleged they also beat and intimidated local residents.

"They took people to the basement of the school, beat them, electrocuted them, forced them to dig trenches, forced them to give information about people who worked in Ukrainian state bodies. But they didn’t kill anyone," she told CNN.

Kolodochka said there had been no humanitarian aid until August when occupying forces provided some sugar and flour. She said people mainly survived on their own garden produce. She said she had left the town in April, but her parents had stayed behind.

"There are people left [in Tokarivka] who are very, very much waiting for our military," she said. "People really need help. There are ten paralyzed old ladies. There are people with diabetes and asthma. They survive as best they can. Medicines are very much needed."

As for those who had died during the occupation, Kolodochka told CNN: "There are people buried in their yards — we just buried them in their yards."

She added that there was still great uncertainty about what will happen. "People are still scared. Will they stop shooting? Is it true that the Russians have left? Or not? They are waiting for Ukrainian military so much."

But she insisted: "We will survive everything to be at home."

A back-up power line to the Zaporizhzhia Nuclear Power Plant (ZNPP) has been restored, according to a tweet put out by the International Atomic Energy Agency (IAEA) on Sunday morning.

The back-up line will provide the plant with the "external electricity it needs for reactor cooling and other safety functions."

The last operating reactor at ZNPP, which is Europe's largest nuclear complex of its kind, was shut down earlier on Saturday after the transmission line was restored. 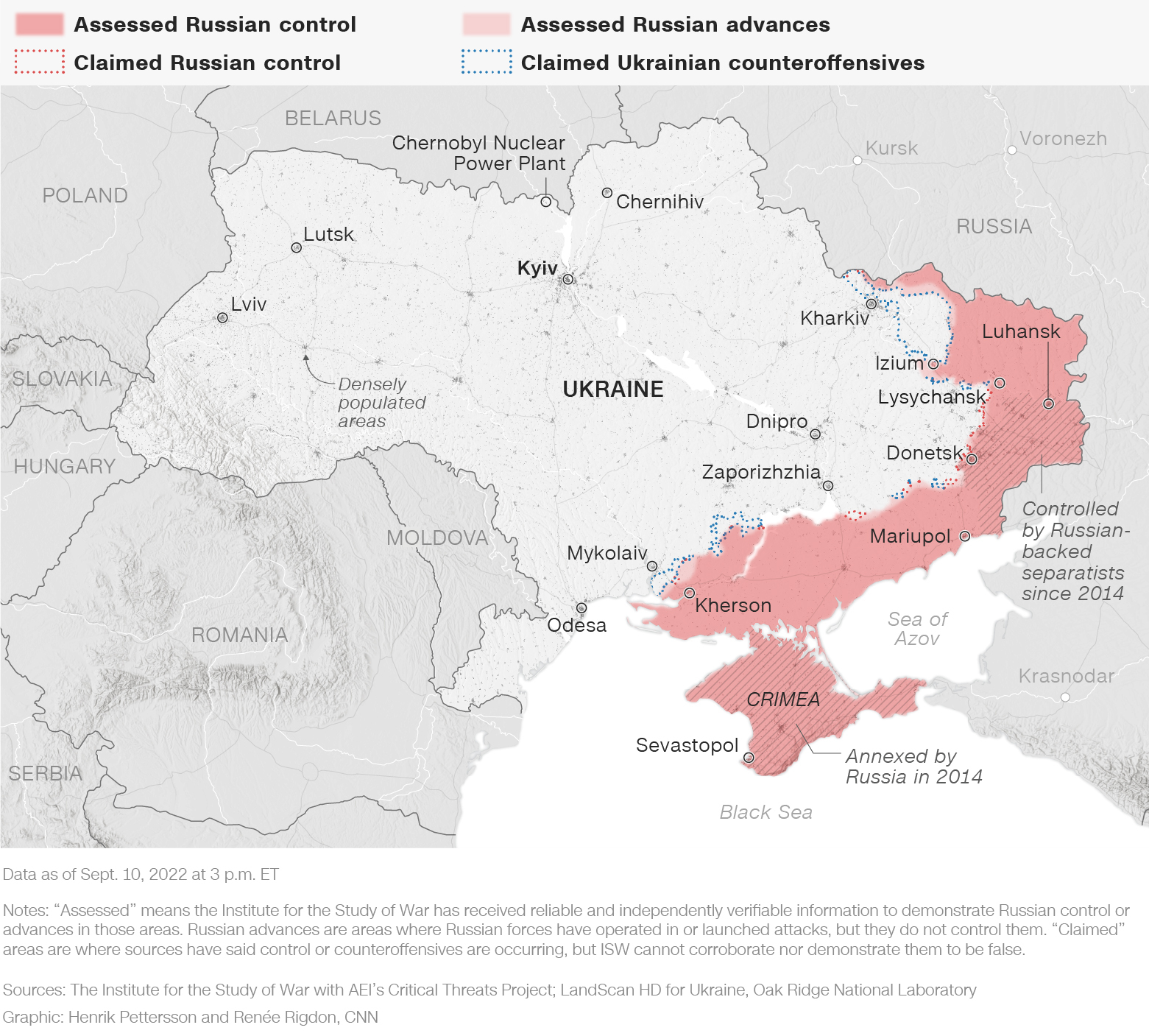 When Ukrainian forces entered the city of Izium Saturday, it was more than a major military victory. It was a sign the war in Ukraine might be entering a new phase, one in which Russian troops are scrambling to hold onto the territory they captured over the past six months.

Russians escaped and left weapons and ammo behind. City center is free," a spokesperson for the Bohun Brigade of the Land Forces of Ukraine said in a statement Saturday afternoon.

The last five days have seen the most ambitious ground assaults by the Ukrainians since Russia launched its full-scale invasion in late February. Video and satellite images geolocated by CNN show the advances have involved sustained attacks on command posts, ammunition stores, and fuel reserves far behind the front lines.

A senior US official said Ukrainian forces had achieved some success in attacking Russian supply lines, with the intention of cutting off and isolating Russian troops west of the Dnipro River.

Saturday's rapid advance did not end with Izium, as Ukraine appeared to have opened a new front against Russian defenses on the border of the Donetsk and Luhansk regions.

The head of the regional military administration for Luhansk, Serhiy Hayday, indicated the city of Lysychansk was the target of the new offensive.

Lysychansk was the last city in the Luhansk region in eastern Ukraine to fall under Russian control in July, after weeks of intense fighting. Hayday told CNN on Saturday "the occupiers, including both the collaborators and the military, are running away in a hurry." 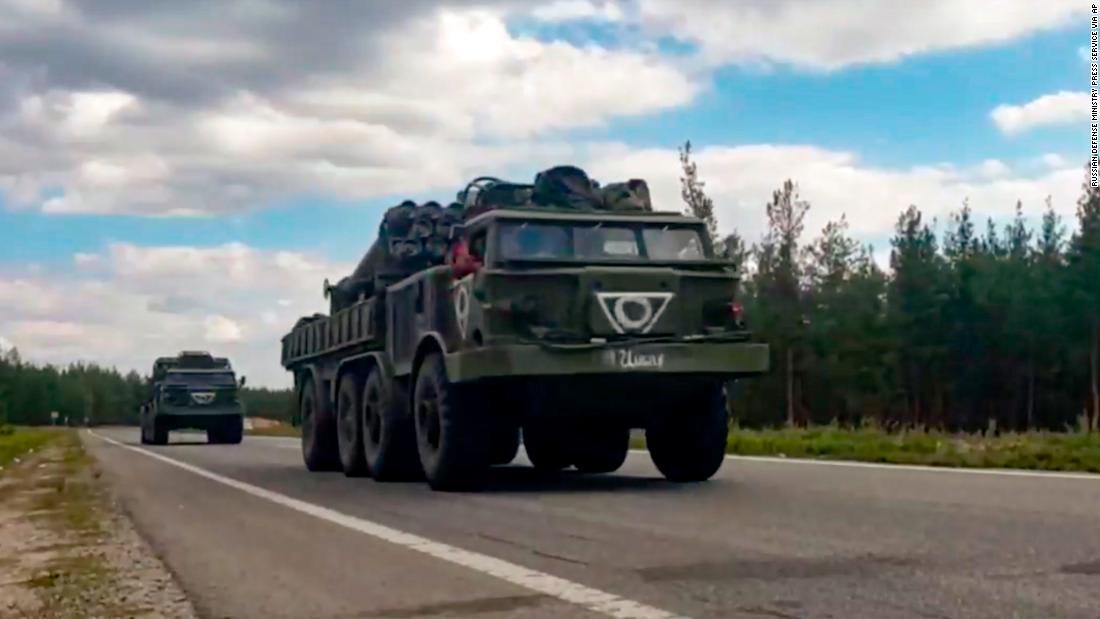