Deputies from 18 municipal districts in Moscow, St. Petersburg and Kolpino have called for Russian President Vladimir Putin’s resignation, according to a petition with a list of signatures posted on Twitter on Monday.

“We, the municipal deputies of Russia, believe that the actions of its president Vladimir Putin are detrimental to Russia’s and its citizens’ future. We demand Vladimir Putin's resignation from the post of the President of the Russian Federation,” said the petition posted by Ksenia Thorstrom, a local deputy of the Semenovsky District in Saint Petersburg.

The petition follows Russia’s first regional and municipal elections since the start of the war, which brought a sweeping victory for pro-Kremlin candidates.

“The petition's text is concise and does not “discredit” anyone. If you are mundep [municipal deputy] and want to join, you are welcome,” Thorstrom said in a Twitter post.

The council of one Moscow district (Lomonosovsky) also demanded Putin's resignation, saying: "Your views and your model of government are hopelessly outdated and hinder the development of Russia and its human potential."

Last week, the deputies of the Smolninskoye municipality of St. Petersburg called on the State Duma of the Russian Federation to bring charges of treason against Vladimir Putin. Several of them now face charges for discrediting the Russian army, according to a Twitter post from one of the local officials, Nikita Yuferev.

Ukrainian officials have begun addressing the daunting demands of reconstruction in recently liberated areas, with winter just a couple of months away.

After recapturing the city of Izium over the weekend, Ukrainian forces are taking steps to stabilize the situation there, according to Maksym Strelnikov, a member of the city council.

Residents who fled want to return home, Strelnikov said at a a briefing Monday, but added that "more than 80% of the city infrastructure is destroyed, including multi-storey buildings and private houses, enterprises, government institutions and educational institutions, as well as [industrial] plants."
"The central heating system, which was used by majority of residents in winter, is damaged. So these would be the challenges to overcome for the local authorities," Strelnikov said.

He also talked about the privations suffered by civilians during the occupation.

"As of now, we know at least 1,000 civilians [in Izium] have died due to hostilities. But we think even more people were affected due to lack of medical care, as the Russian occupiers have destroyed all the health care institutions in March. The occupiers have looted all the pharmacies, so there was no access to medication. This is the most urgent issue for now, along with hospitalization of Izium residents, who require urgent medical care," he added.

Strelnikov said there were about 10,000 civilians left in the city, after a recent evacuation of women and children.

"Most Izium residents are waiting to come back home, but as of now the situation with critical infrastructure is a serious challenge ... We hope that we will be able to do everything possible to be prepared for winter," he noted.

Some background: Although Izium is under Ukrainian control, the war is not far away. There is fighting about 40 kilometers (about 25 miles) to the east around Lyman. The official Telegram channel of the self-declared Donetsk People's Republic reported Monday that the town "is under full control of the troops of the People's Militia of the DNR, LNR and the RF. It is relatively calm."

It said that Ukrainian forces "do not give up attempts to attack nearby territories," but such attempts "have been repelled. The enemy retreated with loses. "

As Kyiv's offensive continues in the northeastern region of Kharkiv, Ukrainian President Volodymyr Zelensky issued a stark warning to Moscow on Sunday, declaring that “history will put everything in its place."

Catch up on the latest on Ukraine's counteroffensive and other big headlines: 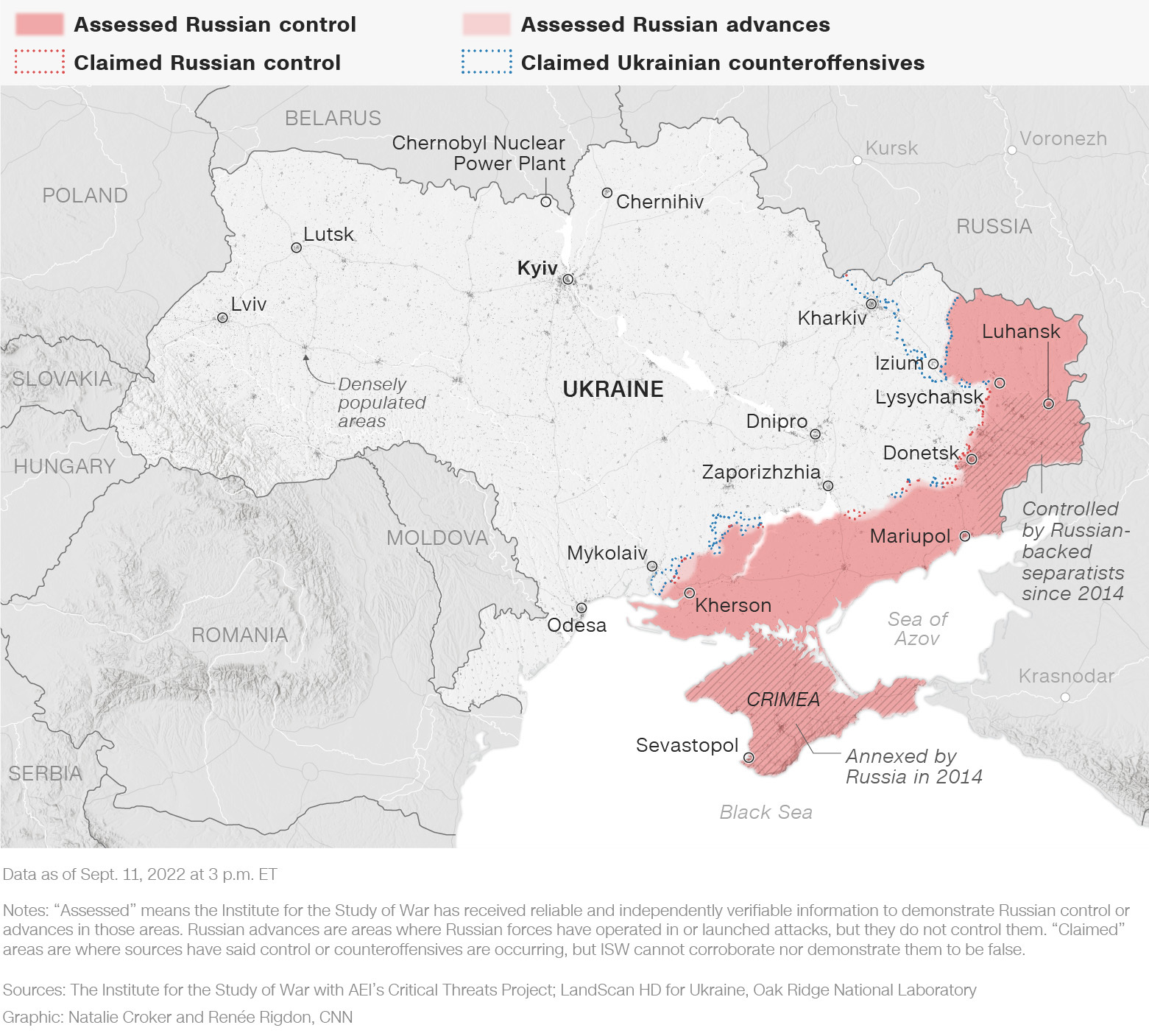 “At the moment, the plant is in cold shut down and we have been able to stabilize it,” Grossi said at a news conference in Vienna.

Grossi explained that Unit 6 went into “island mode,” providing low level power input to the plant but that that was not sustainable.

Concerns about the plant: Grossi opened the news conference by saying that his two primary concerns are that the shelling continues, and that there is obviously ongoing concern of any direct impact on the reactors and associated facilities, in particular the spent fuel areas which could have serious consequences.

The other primary concern is the lack of external power into the plant, that is essential to continue operations.

When pressed by reporters about whether Ukraine would keep all the reactors in cold shutdown for safety reasons, Grossi said that independent of the reactors being in cold-shutdown, with the external power interrupted, the plant could still face a nuclear accident.

He said repeatedly that it was up to Ukraine whether or not to keep the reactors in that mode, saying that Ukrainian President Volodymyr Zelensky considered the plant’s operations “very important” as part of their national electrical grid.

Ukrainian authorities claimed that around 500 square kilometers (almost 200 square miles) of territory has been recaptured in the southern Kherson region in the past two weeks.

Natalia Humeniuk, a spokeswoman for the Ukrainian military in the south, said the settlements of Vysokopillia, Novovoznesenske, Bilohirka, Myroliubivka and Sukhyi Stavok were “completely liberated from the occupiers and are under the Ukrainian flag."

Speaking at a briefing on Monday, Humeniuk said "the area has been cleared" of Russian mines, adding that "additional measures still are being taken there.”

“Shelling of these territories continues, but the population is under Ukrainian jurisdiction," she added.

Ukrainian forces have the ambitious goal of taking back most of the Russian-occupied region of Kherson by the end of the year, senior US officials and Ukrainian officials told CNN last Wednesday.

Ukraine and Russia are both interested in a proposal by the UN’s atomic watchdog to establish a protection zone around the Russian-occupied Zaporizhzhia nuclear power plant in Ukraine, the head of the International Atomic Energy Agency (IAEA) said Monday.

Speaking at a news conference in Vienna, IAEA Director General Rafael Grossi said he had held talks with both countries since he first made the call for the zone in an interview with CNN’s Christiane Amanpour last week.

Grossi said Ukraine was a “natural partner” in the talks since Zaporizhzhia is a Ukrainian plant, but added Russia is also “an indispensable part of the discussions since they are in control of the facility.”

He added that both Ukraine and Russia were engaging and asking questions about the proposed zone, which is designed to prevent activities like shelling that have caused damage to the plant, and to protect the security of the facility and the people there.

“Russia is confidently coping with external pressure, and in fact, one might say, with financial and technological aggression from some countries,” Putin said during the televised meeting in an apparent reference to the sanctions introduced by the West after Russia’s aggression in Ukraine.

“The economic blitzkrieg tactics, the sudden attack they were counting on, did not work - this is already obvious to everyone, and to them too," he added.

A sharp recession in the Russian economy was avoided, thanks to the “effective protective measures” that were promptly implemented by the Russian government, he noted.

“There is every reason to expect that by the end of the year inflation will be about 12%,” he added saying that the economy is starting to grow and companies are returning to business as usual.

The Kremlin on Monday insisted that Russia would achieve all the goals of the "special military operation" in Ukraine, despite its damaging setback in Kharkiv over the weekend.

“The special military operation continues and will continue until the initial goals are achieved,” Kremlin spokesman Dmitry Peskov said in a conference call with journalists.

Russian President Vladimir Putin is aware of the situation on the frontline, he added.

After the success of Ukraine's counteroffensive on Saturday, the Russian Defense Ministry sought to present its retreat as a strategic regrouping.

"The decision was made to regroup Russian troops in the areas of Balakleya and Izium and redirect their efforts in the Donetsk direction," it said.

Peskov said Putin is aware of the said "regrouping" of Russian troops.

“Of course, all the actions of the army during the special military operation are reported to the supreme commander-in-chief [President Vladimir Putin],” Peskov told journalists. “The President is in constant round-the-clock communication with the minister of defense and with all military leaders."

Ukraine’s Kharkiv region has lost power and water supply once again due to shelling after it was previously lost on Sunday evening, Kharkiv’s mayor Ihor Terekhov said on Monday afternoon.

“Yesterday evening situation repeats again. Due to the shelling, critical infrastructure was put out of operation, resulting in the loss of power and water supply in Kharkiv,” he said on Telegram. “Power engineers, rescuers and utility workers are working to eliminate the consequences of the shelling."

Earlier on Monday, he said 80% of the electricity and water supply had been restored in the region after Sunday’s outage. Since then, Russia has launched fresh air strikes on Kharkiv.