Former New Mexico Gov. Bill Richardson and his team were in Moscow this week and held meetings with Russian leadership, CNN has learned.

The details of those meetings were not immediately clear. Richardson and his center privately work on behalf of families of hostages and detainees, and the trip comes as the Biden administration works to free two Americans whom the State Department has classified as wrongfully detained: Brittney Griner and Paul Whelan.

A spokesperson for the Richardson Center told CNN on Tuesday that “at this point we are not able to comment on this.”

CNN reported in mid-July that Richardson had been expected to travel to the Russian capital. Richardson has long worked to free Americans detained abroad and played a role in securing Trevor Reed's release from Russian detention in April.

A source familiar with the situation told CNN in April, following Reed's release, that members of the Richardson Center had traveled to Moscow in February, in the days immediately before the Russian war in Ukraine, to meet with the Russian leadership. Following that visit, the Richardson Center came away with a clear sense of what the Russians were willing to do and how they were willing to do it, which was presented to the White House.

Some background: The Biden administration has repeatedly said that working to secure Griner and Whelan's release, as well as that of Americans wrongfully detained abroad, is a top priority.

In late July, US Secretary of State Antony Blinken announced that the US had put forward a “substantial proposal” to try to secure the release of Griner and Whelan. Sources told CNN that proposal included a swap for convicted arms dealer Viktor Bout.

Ukraine's Ambassador to the US Oksana Markarova said the counteroffensive against the Russians shows that Ukrainian forces have gained momentum.

"It's the 202nd day of the war, and this counteroffensive, which already allowed us to free more than 2,500 square miles of Ukrainian territory, and more importantly, almost 300 villages and different settlements, and our people there, is one of the major turning points," Markova told CNN's Wolf Blitzer.

She added that Ukrainian forces are still facing difficulties in the war.

"The fight that Russians are putting up, of course when they're not running, is pretty big. And especially they're doing very cowardice attacks on our infrastructure, and just still shooting at the civilian buildings, places, everywhere. But it's a big momentum when we are showing that we can win."

Burned-out tanks and trucks emblazoned with Russia's signature 'Z' symbol lay at the side of the road, gutted and red with new rust. A collapsed bridge was covered in signs warning of landmines. Further along, the wreckage of a car was left alongside a destroyed petrol station surrounded by the debris of shelling.

These were the signs of Ukrainian victory and, for now, a Russian rout.

And the residents of Izium appear relieved to see their city back in Ukrainian hands.

Along with the loss of weaponry, and the humiliating retreat captured on multiple videos and shared across social media, one military official told CNN that a large number of Russian prisoners of war have been taken by Ukraine.

During CNN's visit, a group of Ukrainian soldiers barreled up triumphantly in a steaming tank.

With obvious glee, they quickly hitched it to a Russian self-propelled artillery vehicle, abandoned intact by retreating Russians. The weapon is among the most powerful in Russia's armory and will be repurposed for Ukraine's counteroffensive.

When asked if it was a tough fight to retake the city, the tank driver who drove off with the howitzer replied, "Not really."

Read more from CNN's coverage on the ground here: 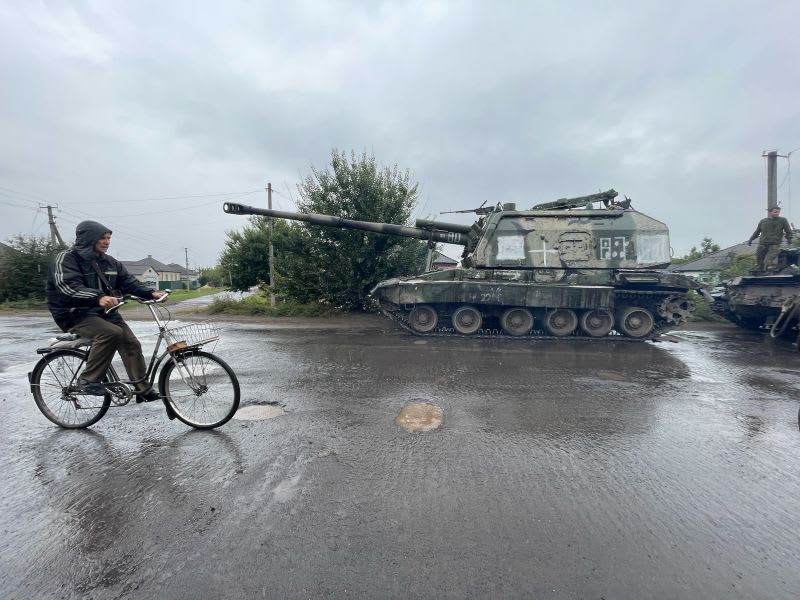 'We prayed to be liberated': Inside a city recaptured by Ukraine after months of Russian occupation | CNN

Ukrainian boxing world champion Oleksandr Usyk shared photos of himself at his family home in Vorzel, near Bucha, on Tuesday.

It was Usyk’s first time explicitly posting from the area since the house was taken by Russian forces earlier this year. Usyk posted photos on his verified Instagram account’s story along with a location tag for Vorzel.

The photos show Usyk, 35, standing near a Ukrainian flag outside the fence of the house.

In April, Ukrainian news outlet ICTV tweeted images from Usyk’s wife’s Instagram story which showed the house being destroyed and burned, along with a caption reading, “Russian world! It came to me too! Beasts! They just ruined everything, they were sh*tting as usual!”

In an interview with Britain's The Guardian in August, Usyk said that his house had been broken into by Russian soldiers, but that he had “people rebuilding it, so everything is going to be okay.”

Usyk defeated British boxer Anthony Joshua for the second time on Aug. 20 in Saudi Arabia and returned home to Ukraine on Aug. 29, according to an Instagram post.

As Ukraine continues to liberate swathes of territory in the east, Ukrainian presidential military adviser Oleksiy Arestovych says the counteroffensive has “slowed down slightly.”

“The counteroffensive continues but has slowed down slightly because most of the Ukrainian forces are fighting to capture the city of Lyman, to open our way into the Luhansk region. We will intensify our strikes and liberate new territories in a different way,” he told CNN’s Becky Anderson in an interview.

President Volodymyr Zelensky says Ukrainian forces have taken 6,000 square kilometers of land since the beginning of the month. His adviser also said they conducted a storm operation that liberated “more than 300 settlements in four days.” 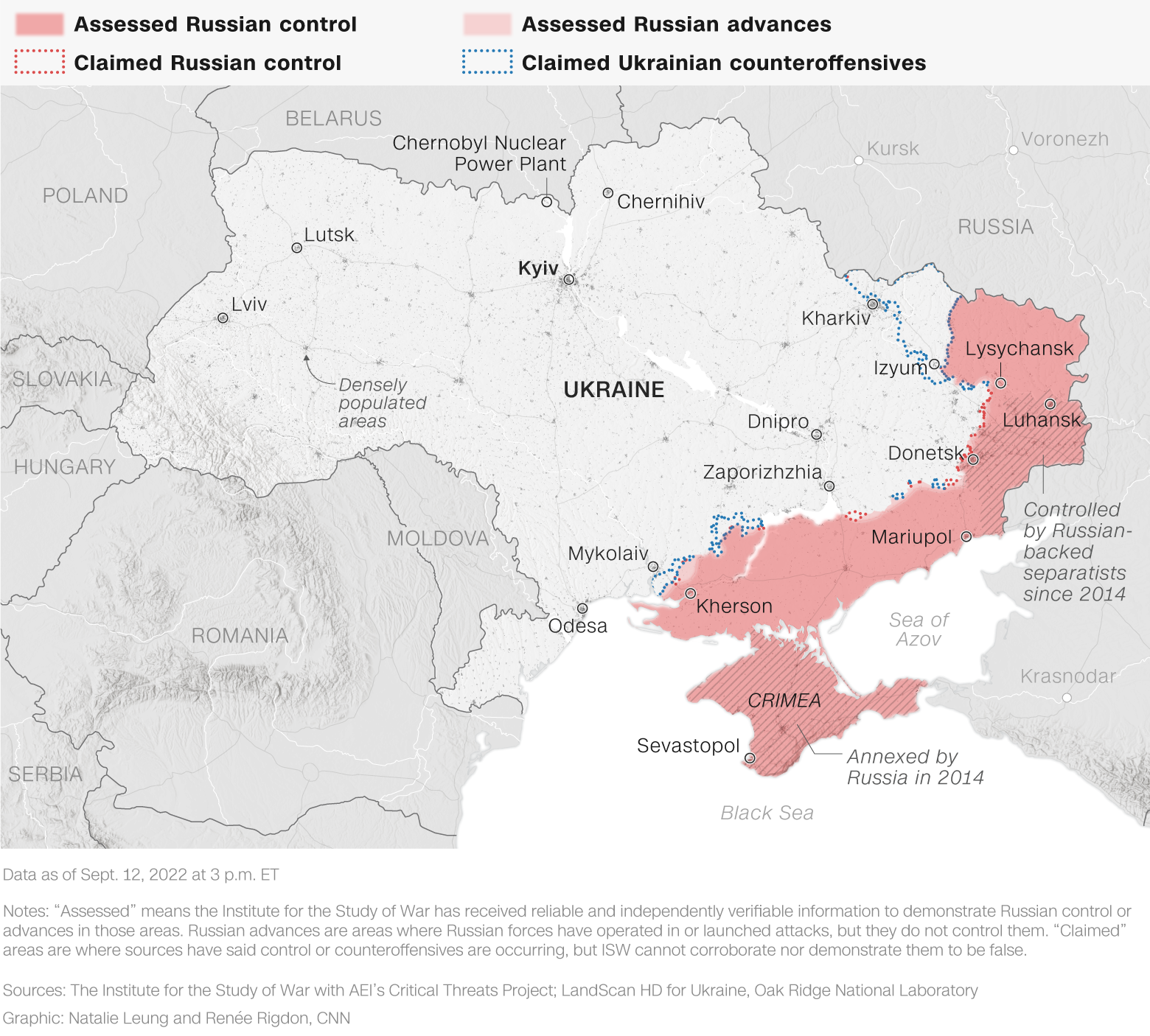 Here are more of the latest headlines from Russia's war in Ukraine:

The White House said Tuesday that another aid package for Ukraine could be announced soon.

John Kirby, the National Security Council coordinator for strategic communications, said he didn't want to "get ahead of future security systems packages," when asked by CNN's Phil Mattingly about more assistance to Ukraine.

"I do think you'll see another one here in coming days," Kirby continued. "We're in lockstep with the Ukrainians talking to them every day."

Kirby said there were "real-time discussions going on with the Ukrainians about what their military needs are."

He added: "Many of the systems that we've been providing in just the last few weeks and couple of months have proven instrumental and effective in the Ukrainians ability to go on the offense and to be actually quite effective on the defense in the last several days and weeks."

Some context: President Volodymyr Zelensky acknowledged this week the importance of US assistance to the recent Ukrainian counteroffensive. “We prepared carefully for this. It has taken months of planning. We used reconnaissance and accuracy, we used our allies, especially the United States army, for information on this, and we used Western weapons,” he said.

The Pentagon said some Russian forces have crossed from the Kharkiv region back into Russia.

“We've seen a number of Russian forces, especially in the northeast, in the Kharkiv region, cross over the border back into Russia as they’ve retreated from the Ukrainian counter-offensive,” Pentagon press secretary Brig. Gen. Pat Ryder told reporters during a briefing Tuesday.

The US was not surprised that Ukraine forces “pushed as quickly as they have” in the counteroffensive, Ryder said, but based on reports that the Pentagon has seen “on the Russian military response, it was probably the Russians” who were surprised by the push.

As Ukrainian units press their offensive in parts of the Donetsk and Luhansk regions, Russian forces are trying to gain ground elsewhere, according to the Ukrainian military.

The military's General Staff, in its latest bulletin, said Ukrainian units had successfully repelled Russian attacks around the city of Bakhmut, while Russian artillery and air strikes continued to pound settlements near the front lines across Donetsk.

"During the day, the enemy carried out 2 missile strikes, 8 air strikes and conducted 13 strikes from missile artillery systems," according to the military.

There was also Russian mortar and tank fire in the Zaporizhzhia region, the General Staff said.

Looting claims: The military claimed that in areas of Kharkiv and Luhansk, there was widespread looting from retreating Russian forces.

The General Staff said that on the Starobilsk-Luhansk highway, in the direction of Luhansk, "about 300 civilian cars, mostly with state license plates of the Kharkiv region were spotted – most on trailers driven by Russian military personnel."

It claimed that in the south, around the city of Polohy, Russian troops were also stealing private cars. And in Nova Kakhovka, in the Kherson region, Russians "began to massively remove furniture and household appliances from temporarily abandoned settlements."

CNN is unable to confirm the military's claims, but there has been widespread evidence of looting in Kharkiv and other previously occupied Russian areas.

Military shortage claims: The General Staff also claimed that the Russian military was moving up the graduation of cadets from some Defense Ministry academies, such as the Black Sea Higher Naval School, to make up for shortages of junior officers.

"The shortage of tactical-level commanders is due to the refusal of reserve officers to sign contracts amid recent events. The level of morale and psychological state of the enemy's personnel continues to decline," the General Staff asserted. "A significant number of servicemen do not return to military units after the end of their vacations."