Ukrainian President Volodymyr Zelensky was involved in a minor car crash in Kyiv on Wednesday, according to a statement from the president’s press secretary.

The president was examined by a doctor and did not have any serious injuries, the statement said.

“In Kyiv, a car collided with the car of the President of Ukraine and escort vehicles. Medics accompanying the Head of the state provided the driver of the car with emergency aid and transferred him to an ambulance,” the statement read. “The president was examined by a doctor, no serious injuries were found. The law enforcement officers will find out all the circumstances of the accident."

Nikita Yuferev, a deputy in Smolninskoye Municipal District in St. Petersburg, is not backing down from his calls for Russian President Vladimir Putin to resign — even after having to pay a fine in court for speaking out, with a threat of jail time coming next.

“We will continue to insist on his resignation,” he said, through a translator.

Yuferev said he is doing it for his children, saying that he wants them to be able to speak their minds at demonstrations and protests.

“I don’t want them to fear retaliation from the police,” he told CNN's Erin Burnett,

After receiving support from some people, Yuferev said he believes public opinion is shifting, as compared to when Putin first attacked Ukraine. In addition to offering to pay the fines and legal fees, another person offered to buy him a ticket to move his family to Mexico where he could feel safe.

“Of course, this is all anecdotal. We refused, but it shows just how much support we are getting and how our ideas are being accepted by Russian society,” Yuferev said.

Some background: By Monday, at least 47 municipal deputies had signed a petition demanding Putin's resignation, according to one of those involved. "Their geography has expanded significantly,” Ksenia Thorstrom, a municipal deputy of the Semenovsky District in Saint Petersburg, told CNN.

Municipal deputies are local officials with limited political influence. The petition follows Russia’s first regional and municipal elections since the start of the war, in which pro-Kremlin candidates were overwhelmingly successful.

Days after a stunning counteroffensive forced a Russian retreat in the northeast of Ukraine, the focus has turned to the implications for the outcome of the war.

However, UN Secretary-General António Guterres, who spoke by phone Wednesday with President Vladimir Putin, said he felt that “we are far away from the end of the war,” while German Chancellor Olaf Scholz, who spoke Tuesday with the Russian leader, said he didn't think Putin's attitude had changed.

Here's what else you need to know:

Here's the map of control as it stands currently: 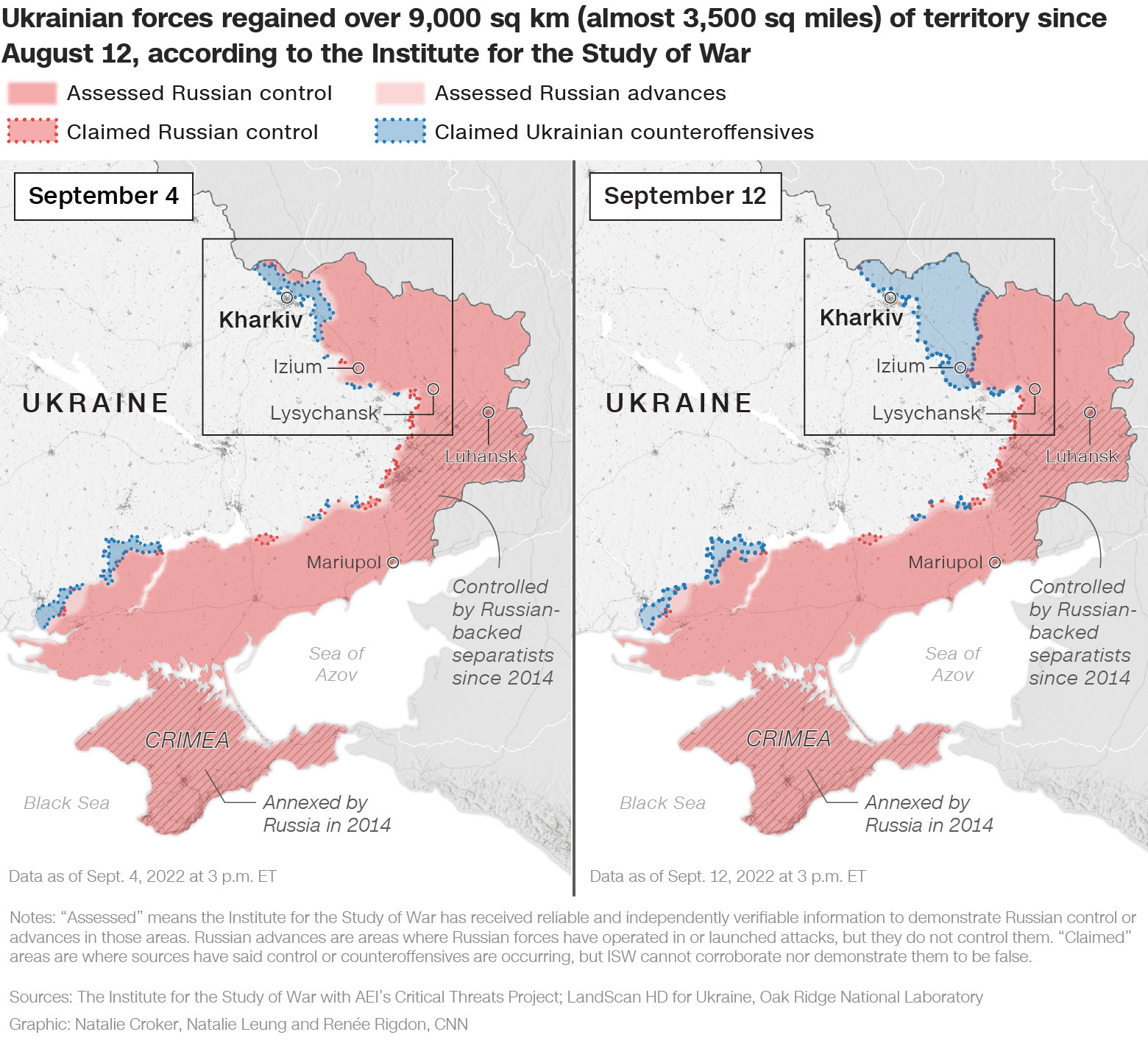 The rout of Russian forces in the Kharkiv region has led to some unusually harsh and public debate in Moscow. Commentators and politicians have been discussing what went wrong – frequently blaming the Ministry of Defense.

The public airing of complaints over what Russia describes as a "special military operation" in Ukraine is in sharp contrast to the handling of previous setbacks, such as the loss of Snake Island, where the Russian withdrawal was described as a goodwill gesture.

Commentators have dismissed the defense ministry’s weekend explanation that forces were being "redirected" away from Kharkiv to Donbas.

A member of Russia’s Council for Interethnic Relations, Bogdan Bezpalko, suggested that military officials who had ignored intelligence about an imminent Ukrainian attack should be held to account.

“On the front for two months, Ukrainian Armed Forces and military equipment have been massing in that area, all Telegram channels have been writing about it," he said on state television.

“Where was our damned reconnaissance? All of their heads should be lying on Putin’s desk."

Bezpalko called for “limited mobilization” in Russia. “Of course, this is a tactical defeat,” he said Monday.

Discussion of a general mobilization — and calling the "special military" operation a war — is also entering the Russian parliament.

“How is a special military operation different from a war? You can stop the military operation at any time. You cannot stop the war. It ends either in victory or defeat. I'm leading you to the idea that there is a war going on," said Gennady Zyuganov, the leader of the Russian Communist party, during a session Tuesday.

Some context: On Tuesday, Kremlin spokesman Dmitry Peskov said there was "no discussion of this for now” on a general mobilization. When asked about criticism about the operation in Ukraine, he said it illustrated “pluralism,” adding that Russians support President Vladimir Putin and his decisions but warned there was a limit to critical opinions.

As for other, critical points of view, as long as they remain within the framework of the law, this is pluralism. But there is a fine line, and one must be very careful here,” Peskov said.

The head of the Kherson city council says that Ukrainian forces have liberated a town on the northern approaches to the city.

The town of Kyselivka was liberated "in close proximity to the regional center itself. The occupiers are panicking, and the local population is in a state of expectation," Oleksandr Samoilenko told Ukrainian television.

Samoilenko's comments were not confirmed by the Ukrainian military.

Natalia Humeniuk, the spokeswoman for Operational Command South was asked about the reports and would only say that it is "really bad and dangerous for military personnel when officials and the media say anything about settlements that were not confirmed as liberated by the command."

Recent satellite imagery showed a number of Russian military vehicles still in Kyselivka, which is on the main road linking Mykolaiv —which is held by the Ukrainians — and Kherson city, which is still occupied.

On Monday, the Institute for the Study of War said that satellite imagery of known Russian positions in Kyselivka, which is 15 kilometers northwest of Kherson city, showed that all but four Russian vehicles had left previous forward positions.

"The apparent withdrawal of Russian troops from this position may compromise the Russians’ ability to defend the northwestern outskirts of Kherson City and suggests that Russian troops in this area perceive an imminent threat to their positions," the ISW said.

Kyselivka is about 12 kilometers from Kherson's airport, which has been used as a command post and base by Russian forces.

An airliner that had been stranded in the western Ukrainian city of Lviv for months flew out of Ukraine and landed in Poland on Tuesday.

The aircraft belonged to Wizz Air, according to flight monitoring site Flightradar24, and was the first time since April 2022 that a commercial plane had flown out of Ukraine, it said.

“We can confirm that the A320 HA-LWS flew from Lviv to Katowice yesterday,” Ian Petchenik, Flightradar24 Director of Communications, told CNN. The aircraft took off sometime before 11 a.m. ET on Tuesday, according to Flightradar24 data.

The plane’s exact time of departure is unclear as it only turned on its transponder after clearing the Polish border, “likely done as a security measure,” said Petchenik.

While the Airbus A320 is registered to Wizz Air, Petchenik could not confirm whether the carrier was operating it.

CNN has reached out to Wizz Air, a low-cost carrier, for comment but has not received an immediate reply.

Petchenik also said Wizz Air still has three aircraft on the ground in the Ukrainian capital, with Hungarian registrations.

The Ukrainian Infrastructure Ministry has said that it is ready to restart operations from Lviv airport if it obtains Western security guarantees. It's unclear as yet how those would be arranged.

There is "no indication" that Russian President Vladimir Putin's attitude regarding the war in Ukraine has changed, said German Chancellor Olaf Scholz during a news conference on Wednesday.

"Unfortunately, I can't tell you that he has now come to realize that it was a mistake to start this war, and there is no indication that new attitudes are now emerging," Scholz said about his phone call with Putin on Tuesday.

Scholz said he urged Russia to withdraw its troops from the region.

"It is still right to talk to each other and to say what I have to say on these issues from my point of view, because I am strongly convinced that Russia must withdraw ... so that peace has a chance in the region," Scholz said. "And every day it becomes clearer that this is the only chance. We have to talk about that, and that is what I have done."

“We are far away from the end of the war," he told reporters following a call Wednesday with Russian President Vladimir Putin.

"A ceasefire is not in sight,” he said, adding, "I would be lying if I said it would happen.”

The diplomat said he discussed a variety of issues with Putin including the grain deal and the possibility of Russian exports, but cautioned there are obstacles to the export of Russian food and fertilizers. “We are risking the lack of food in the world later this year."

The two also discussed prisoners of war and Guterres quoted Putin as saying there would be no obstacles from Russia with regards to the panel conducting a fact-finding mission into last month’s prison attack in the Russian-occupied region of Eastern Ukraine. Dozens were killed.