The reports out of Russia suggest a military and a leader in desperate need:

As world leaders gathered at the United Nations in New York and condemned him, Russian President Vladimir Putin was back home, scrambling to refill his depleted war machine.

His foreign minister Sergey Lavrov was notably absent as the US Secretary of State Antony Blinken delivered a blistering soliloquy to the UN Security Council, documenting what he referred to as Russia's war crimes since February.

While the news out of Russia seems very bad for Putin and the news out of Ukraine suggests the Ukrainian military continues to outperform all expectations, it is still hard to fathom a change of leadership there.

He is entrenched, as we have written here before, until the government turns on him.

The same is not true in democracies, where leaders come and go. So it is worth also monitoring another geopolitical story out of the UN meeting in New York that may ultimately be one of the fragility of Western democracies.

In an exclusive US interview with CNN's Jake Tapper, French President Emmanuel Macron warned of this crisis.

"I think we have [a] big crisis of democracies, of what I would call liberal democracies. Let's be clear about that. Why? First, because being open societies and being open and very cooperative democracies put pressure on your people. It could destabilize them," Macron said. 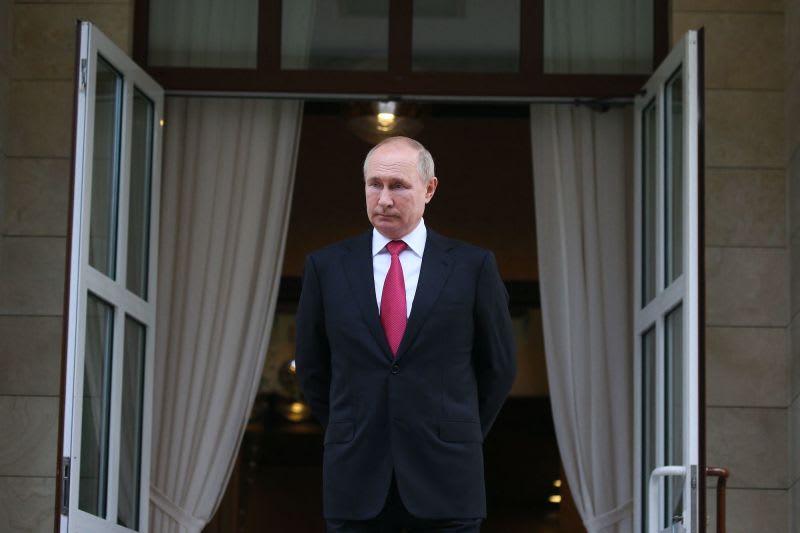 More details emerged about the referendums in the Russian-occupied parts of Ukraine — derided by the Kyiv government and its allies as a sham — while there was heated verbal sparring at a session of the United Nations Security Council.

If you're just joining us, here's what you need to know about Thursday's developments on Russia's war in Ukraine.

In a meeting moderated by human rights lawyer Amal Clooney, foreign ministers of Germany, the Netherlands, Denmark and Ukraine on Thursday discussed allegations of atrocities committed in the conflict in Ukraine and the possible establishment of a special international tribunal to judge the crime of aggression.

“Russia has to pay,” Ukrainian Foreign Minister Dmytro Kuleba said during the event, which was held on the sidelines of the United Nations General Assembly in New York.

He called for the establishment of a special tribunal, echoing a call made by Ukrainian President Volodymyr Zelensky last night.

“We continue to believe that justice must be served in a way that will not leave space for impunity for the crime of aggression,” Kuleba said.

Clooney, who is advising Kyiv on finding accountability for Ukrainian victims, called for world leaders to help Ukrainians rebuild by supporting a draft UN resolution to establish a framework for a compensation commission.

“Ukraine may need up to $1 trillion to repair the damage. Documenting losses should start now,” she said.

A compensation fund proposed by Ukraine would draw on Russian assets abroad that had been seized and appropriated by foreign governments, according to Ukraine’s Deputy Minister of Justice Iryna Mudra, who was also in attendance.

Several other foreign ministers were in the audience and took the podium to voice support for Ukraine, including representatives from the UK, Poland, Canada and Estonia.

Ukrainian President Volodymyr Zelensky on Thursday called on Russians to protest against the "partial mobilization" ordered this week by Russian President Vladimir Putin.

In his daily video address to Ukraine, Zelensky said that thousands of Russian soldiers have already died in the nearly seven-month-old war.

"Tens of thousands are wounded and maimed. Want more? No? Then protest. Fight back. Run away. Or surrender to Ukrainian captivity. These are options for you to survive,” Zelensky said.

Between 70,000 and 80,000 Russians have been killed or wounded during the war in Ukraine, according to an August estimate from the Pentagon.

Addressing the ongoing anti-war protests across Russia, the Ukrainian leader said, “(Russian people) understand that they have been cheated.”

The protests in Russia are an indicator of the mood among the public in the country, he said.

“You are already accomplices in all these crimes, murders and torture of Ukrainians. Because you were silent,” Zelensky said, addressing the Russian people.

“For men in Russia, this is a choice to die or live, to become a cripple or to preserve health. For women in Russia, the choice is to lose their husbands, sons, grandchildren forever, or still try to protect them from death, from war, from one person,” Zelensky said.

A bipartisan group of lawmakers asked the Pentagon to send advanced drones to Ukraine in a letter sent to Secretary of Defense Lloyd Austin on Sept. 21 and obtained by CNN.

“Ukraine could better confront Russian threats" with advanced Unmanned Aircraft Systems, or drones, “like the MQ-1C Gray Eagle or the MQ-9A Reaper,” a group of 17 bipartisan lawmakers wrote in the letter to Austin.

“These advanced UAS systems, which could be staged far from the war’s front lines, would provide the continuous surveillance and long-range precision tracking and targeting needed to counter Russian rockets and missiles,” the lawmakers wrote.

Lawmakers stressed in the letter that it is important to complete the assessment of whether to send MQ-1C Gray Eagle drones “in a timely manner.”

“While important, thorough risk assessment and mitigation should not come at the expense of Ukrainian lives,” the lawmakers wrote.

“We are aware that Ukrainians have asked for Gray Eagles, or have an interest in Gray Eagles, no decisions have been made in that regard,” Ryder said.

The US has, throughout the conflict, given Ukraine other weapons that include intelligence, surveillance and reconnaissance capabilities like Puma drones, ScanEagle drones, Switchblade drones and Phoenix Ghost drones, Ryder said.

Although Kuleba didn't directly mention anyone by name, his comments came after his Russian counterpart, Sergey Lavrov, spoke at a UN Security Council meeting. In his speech, Lavrov attacked the Ukrainian president with a series of dismissive insults while making outlandish claims about who was responsible for the war in Ukraine.

In response, Kuleba described Russia as shameless. "Russian diplomats are directly complicit because their lies incite these crimes and cover them up," he said.

He added, "The Russians are confident that they can get away with anything and they are entitled to do anything they want.

Kuleba said Ukraine was not worried about any increase in Russian troop numbers following a partial mobilization this week.

"Putin announced mobilization but what he really announced before the whole world was his defeat. You can draft 300 or 500,000 people, but you will never win this war."

Kuleba urged UN member states to help his country fight Russian aggression and win justice by holding Russia accountable for its invasion of Ukraine, echoing remarks Wednesday by Zelensky in his UN address.

NATO on Thursday condemned plans to hold referendums in Russian-occupied parts of Ukraine, calling them a “sham” that the alliance will not recognize.

"We condemn in the strongest possible terms the plan to hold so-called 'referenda' on joining the Russian Federation in the Ukrainian regions partly controlled by the Russian military,” the North Atlanta Council, NATO's principle decision-making body, said in a statement.

The referendums were called suddenly at the beginning of this week by pro-Russian officials in occupied regions of Ukraine. They will ask the people of the occupied areas whether they wish to join the Russian Federation.

“These lands are Ukraine. We call on all states to reject Russia’s blatant attempts at territorial conquest,” according to the statement.

The council also accused Russia of escalating its "illegal war" by ordering what Russian President Vladimir Putin called a "partial mobilization" of its military.

"We continue to reject Russia’s irresponsible nuclear rhetoric," it added, referring to Putin's speech on Wednesday in which he threatened the use of nuclear weapons and warned he was "not bluffing."

"NATO Allies remain resolute in providing political and practical support to Ukraine as it continues to defend itself against Russia’s aggression," the council said.

The Defense Department said that Russian President Vladimir Putin’s rhetoric threatening the possible use of a nuclear weapon would not affect the aid the US is providing to Ukraine.

“In terms of the statements or the announcements coming out of Russia, it does not affect the department’s commitment to continue working with our international partners and our allies on providing Ukraine with the support that it needs in their fight to defend their country,” said Pentagon press secretary Air Force Brig. Gen. Patrick Ryder at a briefing.

Putin on Wednesday spoke about the possibility of using nuclear weapons. "The territorial integrity of our homeland, our independence and freedom will be ensured, I will emphasize this again, with all the means at our disposal. And those who try to blackmail us with nuclear weapons should know that the prevailing winds can turn in their direction," he said.

Ryder said that Putin’s threats would not affect discussions on the kinds of lethal aid the US would provide.