A total of 436 bodies have been exhumed from a mass burial site in Izium, according to Oleh Syniehubov, head of the Kharkiv region military administration, who said the work was completed Friday.

Most of the bodies showed signs of violent death, and 30 had traces of torture, Syiehubov said in a post on Telegram.

"There are bodies with a rope around the neck, with hands tied, with broken limbs and with gunshot wounds. Several men had their genitals amputated. All this is evidence of the terrible torture to which the occupiers subjected the residents of Izium. Most of the bodies are civilians, 21 are military," the post said.

Syniehubov vowed to find out the circumstances of each of the deaths "so that their relatives and friends know the truth and the killers are punished."

He thanked the 200 people — forensic experts, police officers, and employees of the State Emergency Service — who had been working at the site in the Kharkiv region, which had been recently recaptured from Russian forces.

Syniehubov added that there were at least three more mass burial sites in other liberated areas of the Kharkiv region.

"All crimes of the occupiers will be documented, and the perpetrators will pay for what they have done," Syniehubov said.

Some background: Izium was subject to intense Russian artillery attacks in April. The city, which sits near the border between the Kharkiv and Donetsk regions, became an important hub for the invading military during five months of occupation. Ukrainian forces took back control of the city on Sept. 10, delivering a strategic blow to Russia's military assault in the east.

The Chairman of the Joint Chiefs of Staff Gen. Mark Milley spoke with the Commander-in-Chief of the Ukrainian Armed Forces Gen. Valery Zaluzhny on Thursday and Friday, according to a US official.

The information provided in a readout by Joint Staff spokesperson Col. Dave Butler did not go into any detail about the discussions, other than that they talked about the "unprovoked and ongoing Russian invasion of Ukraine and exchanged perspectives and assessments.”

Some background: Earlier this month, CNN reported the Pentagon is working out how to support Ukraine's military in the medium and long term, including after the war with Russia has ended. The efforts are being led by Milley and would build on the billions of dollars in military aid the US has given to Ukraine since Russia invaded in February.

The ongoing referendums in the Russian-occupied regions and Russian mobilization in those areas are crimes, Ukrainian President Volodymyr Zelensky said in a nightly address on Friday.

Four Russian-occupied areas of Ukraine began voting in referendums on joining Russia, according to their separatist leaders, in a move that raises the stakes of Moscow's invasion seven months after fighting began.

"The world will react absolutely fairly to the pseudo-referenda — they will be unequivocally condemned, as well as to the criminal mobilization that the occupiers are trying to carry out in Crimea and other parts of Ukraine that they still control," Zelensky added.

Ukraine's president urged people in the Russian-run areas to help to weaken the occupation.

"If you do get into the Russian army, then sabotage any enemy activity, interfere with any Russian operations, pass us all important information about the occupiers — their bases, headquarters, ammunition depots. And at the first opportunity, join our positions. Do everything to save lives and help liberate Ukraine," he added.

Counteroffensive: Meanwhile, Ukrainian forces have recaptured about 9,000 square kilometers of territory (3,500 square miles) "since the beginning of active actions in the east of our country," Zelensky said.

"Nearly 400 settlements have been liberated. This tangible result has been achieved due to the fact that our people in the temporarily occupied territory help us. Please do everything to increase such assistance," Zelensky added.

If you're just joining us, here's what you need to know about Friday's developments in the war in Ukraine. 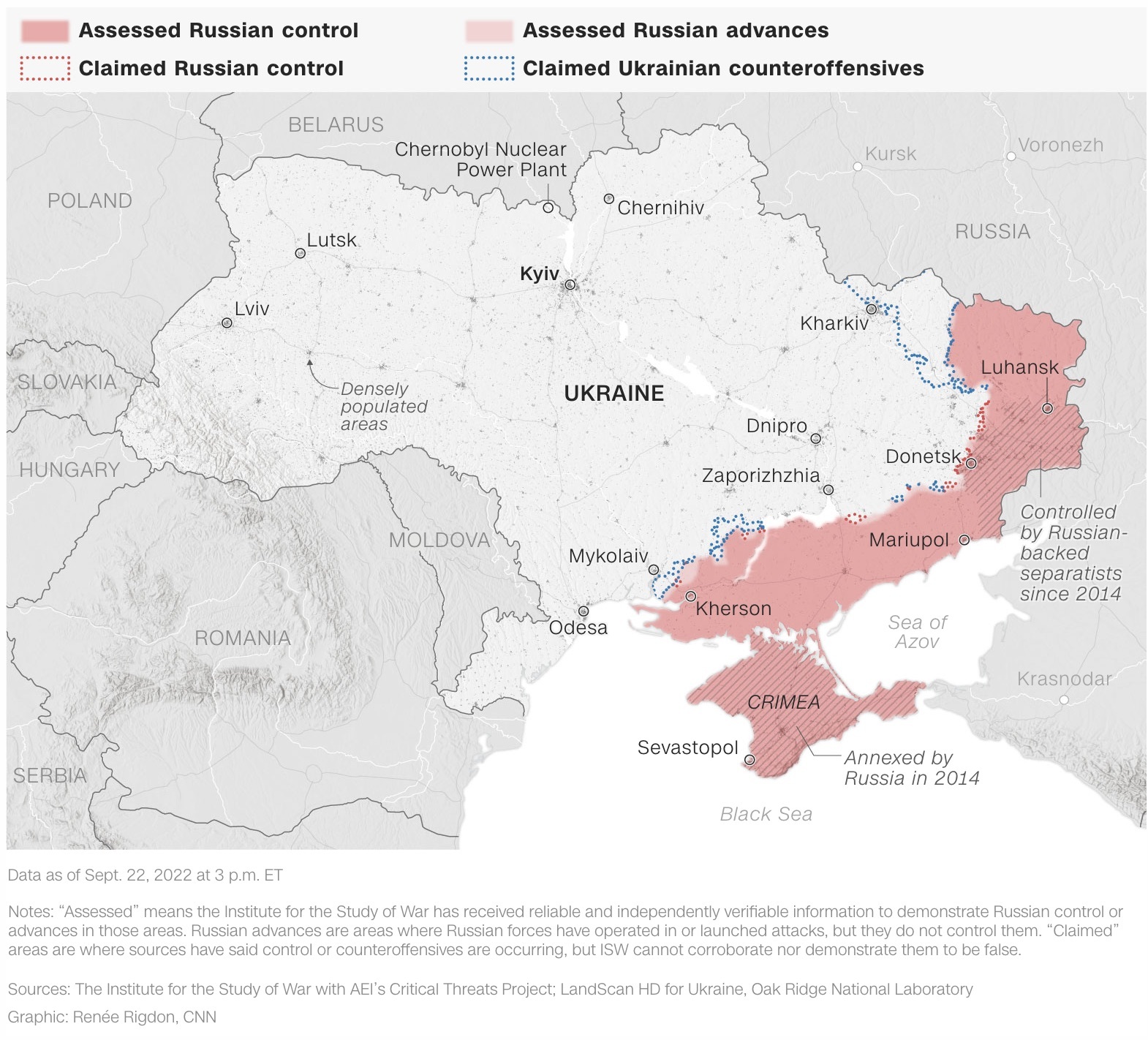 "The United States will never recognize Ukrainian territory as anything other than part of Ukraine. Russia’s referenda are a sham — a false pretext to try to annex parts of Ukraine by force in flagrant violation of international law, including the United Nations Charter," Biden said in a statement.

The President said the US will continue to work with allies to "impose additional swift and severe economic costs on Russia.

"The United States stands with our partners around the world — and with every nation that respects the core tenets of the UN charter — in rejecting whatever fabricated outcomes Russia will announce," the statement said.

Some background: Four Russian-occupied areas began voting Friday in referendums on joining Russia, according to their separatist leaders, in a move that raises the stakes of Moscow's invasion.

The referendums, which are illegal under international law and dismissed as a sham by Western governments and Kyiv, could pave the way for Russian annexation of the areas, allowing Moscow to frame the ongoing Ukrainian counteroffensive as an attack on Russia itself.

Ukraine has withdrawn the accreditation of the senior Iranian diplomat in Kyiv, citing the supply of Iranian-made weapons to Russia.

The move follows a spate of attacks by Russian forces using Iranian-made drones, according to the Ukrainian military. Several of the drones were used in an attack on Odesa Friday in which one person was killed.

In a statement, the Ukrainian Foreign Ministry said that following the attacks, the Iranian charge d'affaires was summoned to the ministry.

The charge d'affaires was told that the supply of Iranian weapons to Russia and their use against civilians "contradicts the publicly declared position of neutrality, respect for the sovereignty and territorial integrity of Ukraine."

"In response to this unfriendly act, the Ukrainian side decided to deprive the Ambassador of Iran to Ukraine of accreditation, as well as to significantly reduce the number of diplomatic staff of the Iranian Embassy in Kyiv," it said.

A statement from President Volodymyr Zelensky's office said that "samples collected on the battlefield confirmed that Russia is using Iranian-made weapons in Ukraine."

"Such actions of Iran are considered as a step against the sovereignty and territorial integrity of Ukraine, as well as against the life and health of Ukrainian citizens," a spokesman for Zelensky said.

“When a permanent member of the United Nations Security Council starts an unprovoked and unjustifiable war, a war condemned by the UN General Assembly, its suspension from the Security Council should be automatic,” Michel said during his address to the UN General Assembly on Friday, adding that the Kremlin is trying to “mobilize the entire world against an imaginary enemy.”

“We are here in the United Nations, the house that brings the people of the world together. And we all know that a robust multilateral system requires mutual trust. … The use of the veto should be the exception, but it is becoming the rule,” he said.

Michel urged reform, which he said is "necessary and urgent."

Two Americans who had been held by Russian-backed forces in Ukraine for more than three months were back on US soil on Friday.

Alexander John-Robert Drueke and Andy Tai Ngoc Huynh arrived in New York City after they were released earlier this week in a prisoner swap between Russia and Ukraine that was brokered by Saudi Arabia.

CNN obtained a selfie of the two men. Their families said they believe they are in good health.

“We know that they are speaking, they are breathing, they are ambulatory, and they sound like themselves,” said Darla Black, the mother of Huynh’s fiancée Joy Black, told CNN on Friday.

The Americans were captured in June while fighting for Ukraine in a battle near Kharkiv. Their pro-Russian captors, the self-declared Donetsk People's Republic, have governed a breakaway portion of Ukraine's Donetsk region since 2014.

Even after being captured, their families said the men told them they have no regrets about going over to fight with the Ukrainians.

“Alex told me emphatically 'no, no regret,'” his aunt, Dianna Shaw, told CNN. “They really want people to understand that Ukraine needs our support. They need the support of all democratic nations. They need democracies to come together and push Putin back.”