Any territory that is formally incorporated into the Russian Federation will “benefit from full protection,” Russian Foreign Minister Sergey Lavrov said on Saturday.

“The entire state territory of Russia that has already been or can additionally be formalized in the constitution of our country will certainly benefit from full protection,” Lavrov said during a press conference in New York.

“How can it be otherwise? All the laws, doctrines, concepts, and strategies of the Russian Federation are applicable throughout its territory.”

Lavrov's comments came a day after four Russian-occupied areas of Ukraine started voting in referendums on joining Russia, according to their separatist leaders -- a process that continues Monday. The referendums are illegal under international law and dismissed as "a sham" by Western governments and Kyiv.

Last week, Russian President Vladimir Putin announced immediate ramped-up military measures in Moscow's invasion of Ukraine, adding: "If the territorial integrity of our country is threatened, we will certainly use all the means at our disposal to protect Russia and our people.”

A British man released last week after being previously held by Russian-backed forces in Ukraine says he was “treated worse than a dog" by his captors.

In an interview with the UK’s Sun newspaper, Aiden Aslin described being held in a small cell with three other men, being subjected to regular beatings from his captors, and struggling to be given adequate food and water.

“We also had to sing the Russian national anthem every morning,” Aslin recalled. “And if you didn’t sing it, you would get punished for it. You could get beaten, or they would punish you some way or another.”

A court in the self-proclaimed Donetsk People’s Republic (DPR) sentenced Aslin and two other foreign fighters to death on June 9. They were found guilty of being “mercenaries” for Ukraine by a court in the DPR, Russian state media reported at the time.

Aslin told The Sun that when he first revealed that he was a British citizen, one of his captors “beat me pretty good – probably the best I’ve ever been beaten.”

Russia is the only country that considers the DPR independent. The international community does not recognize the region and its institutions, and considers the territory to be part of Ukraine. Independent watchdog groups have long accused the separatists of a dismal human-rights track record and ill-treatment of prisoners.

"There was an emergency in the area today. In Ust-Ilimsk, a young man fired at the military registration and enlistment office. Military commissar Alexander Vladimirovich Eliseev is in intensive care, in critical condition. The doctors are fighting for his life," Kobzev said.

"The shooter was immediately arrested. And he will definitely be punished," Kobzev said. "I cannot wrap my head around what happened. I am ashamed that this is happening at a time when, on the contrary, we should be united. We must fight not with each other, but against real threats."

Kobzev said security measures will be strengthened and asked the public to remain calm.

"I really hope that the doctors will do everything possible for Alexander Vladimirovich to survive," he added.

Russian state news agency RIA Novosti also reported the incident on Monday, saying it was a shooting at point-blank range and that no one beside the commissioner was injured.

The shooter is a 25-year-old resident of Ust-Ilimsk and a criminal case has been opened against him, Russian state news agency TASS reported Monday quoting the Irkutsk Region's Investigative Committee.

"Investigators are currently working at the scene. The suspect is being questioned, the motives of the crime are being found out," the press service of the regional Investigative Committee said, as quoted by TASS.

Some background: The shooting comes days after Russian President Vladimir Putin announced an immediate "partial mobilization" of Russian citizens in an effort to revive Moscow's faltering invasion of Ukraine.

Defense Minister Sergei Shoigu confirmed that the country will call up 300,000 reservists as part of the mobilization— a move that has sparked protests and an exodus of military-age men.

Russian President Vladimir Putin's threat of using nuclear weapons in Moscow's invasion of Ukraine "could be a reality," according to Ukrainian President Volodymyr Zelensky.

“Maybe yesterday it was bluff. Now, it could be a reality,” Zelensky told CBS in an interview that aired on Sunday. “I don't think he's bluffing.”

Putin announced his military escalation during a national address on Wednesday, in an effort to strengthen Moscow's floundering military campaign in Ukraine.

He called for increased military conscription, with Defense Minister Sergei Shoigu later confirming that the country will summon 300,000 reservists to serve in the conflict -- a strategy that has already been met with backlash in the form of heated protests at home.

Addressing the potential use of nuclear weapons, Putin warned that "those who try to blackmail us with nuclear weapons should know that the prevailing winds can turn in their direction.”

“He wants to scare the whole world. These are the first steps of his nuclear blackmail,” he said.

“I think the world is deterring it and containing this threat. We need to keep putting pressure on him and not allow him to continue.”

“Today I received more information,” Zelensky told CBS in an interview that aired on Sunday. “The journalists are on their way. They found two more mass graves, big graves with hundreds of people.”

“Also and we're talking about a little town of Izium. Do you know? There are two more mass graves in a small town. This is what's going on.”

Some context: On Friday, Ukrainian authorities completed the exhumation of over 400 bodies from a previously discovered mass burial site in Izium. Most of the bodies showed signs of violent death, and 30 had traces of torture, according to an official.

More than 2,350 people have been detained across Russia since President Vladimir Putin's announcement of a partial mobilization, according to the independent protest monitoring group OVD-Info.

At least 2,352 people have been detained in various cities across Russia from Sept. 21 to Sept. 25 but the number of those detained may be higher, the latest OVD-Info numbers showed Monday.

On Sunday, at least 128 people were detained in five cities, including Makhachkala, Yakutsk, Irkutsk, Reftinsky and Kotlas, OVD-Info said.

Some context: Makhachkala is the capital of the predominantly Muslim region of Dagestan. Heated protests have broken out in some ethnic minority regions in Russia, including Dagestan, with activist groups and Ukrainian officials saying these minorities are being disproportionately targeted for conscription in the war. 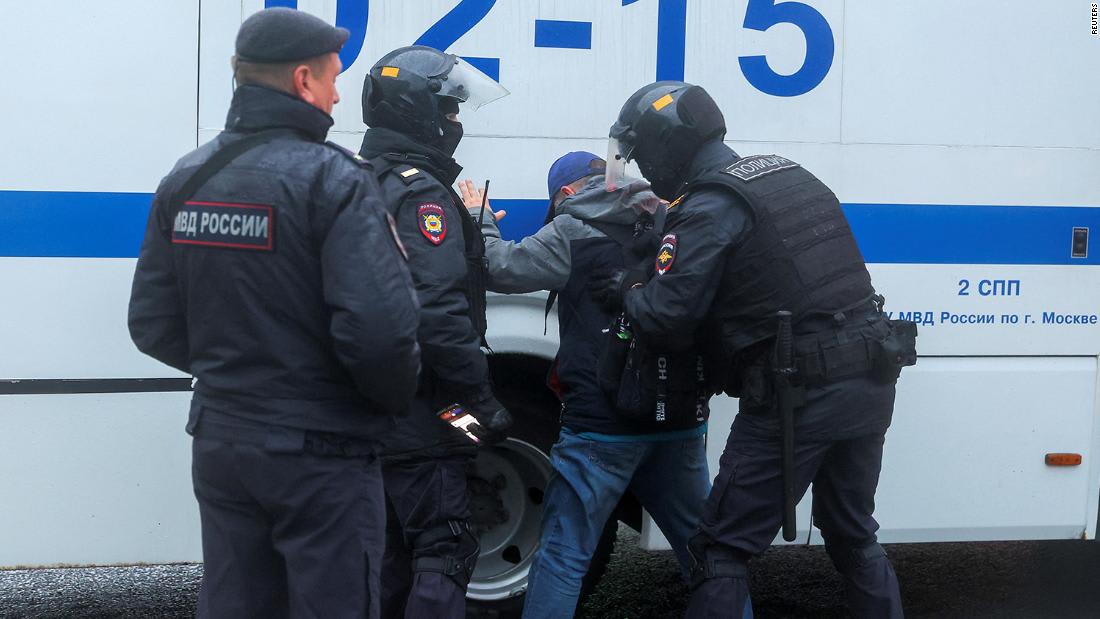 Russia (and before it, the Soviet Union) has built and maintained a large stockpile of tactical nuclear weapons.

The initial thinking was that using a nuke on a battlefield gave leaders an option to make a decisive strike that could stave off defeat without resorting to the use of their biggest nuclear weapons, which after a counterattack would bring a "civilization-ending nuclear exchange," according to the Union of Concerned Scientists.

On its website, the organization calls that thinking "flawed and dangerous."

"Tactical nuclear weapons ... introduce greater ambiguity, raising the possibility that a country might think it could get away with a limited attack," the organization said.

Some analysis supports that theory, but the reality is likely to be far from that.

"US war games predict that a conflict involving use of tactical nuclear weapons will quickly spiral out of control," the Union of Concerned Scientists blog said.

"A Princeton University simulation of a US-Russian conflict that begins with the use of a tactical nuclear weapon predicts rapid escalation that would leave more than 90 million people dead and injured," it said.

Responding to Putin's threat last week, the International Campaign to Abolish Nuclear Weapons (ICAN) says the Europe of 2022 is a much more dangerous place to use nuclear arms than the Japan of 1945, which had a smaller population and was relatively isolated.

In Europe today, "a single nuclear detonation would likely kill hundreds of thousands of civilians and injure many more; radioactive fallout could contaminate large areas across multiple countries," ICAN said on its website.

"Emergency services would not be able to respond effectively and widespread panic would trigger mass movements of people and severe economic disruption. Multiple detonations would of course be much worse," it added.

With his forces retreating in Ukraine, Russian President Vladimir Putin has once again threatened to turn to nuclear weapons, most likely what are often called tactical nuclear weapons.

In a speech last week, he warned that, "In the event of a threat to the territorial integrity of our country and to defend Russia and our people, we will certainly make use of all weapon systems available to us. This is not a bluff."

Russian weapon systems include 4,477 deployed and reserve nuclear warheads, with about 1,900 of these being "non-strategic" warheads, otherwise known as tactical nuclear weapons,according to the Federation of American Scientists.

Tactical warheads refer to ones designed for use in a limited battlefield, say to destroy a column of tanks or an aircraft carrier battle group if used at sea. These warheads, with explosive yields of 10 to 100 kilotons of dynamite, are also called "low yield."

In contrast, Russia's most powerful "strategic" nuclear warheads have explosive yields of 500 to 800 kilotons and are designed to destroy entire cities -- and then some.

The reference to "low yield" for tactical weapons is somewhat misleading as explosive yields of 10 to 100 kilotons of dynamite are still enough to cause major destruction -- as the world discovered in 1945 when the US dropped atomic bombs on Hiroshima and Nagasaki in Japan.

Those bombs were the equivalent about 15 and 21 kilotons of dynamite, respectively -- within the ballpark of Russia's tactical nuclear weapons.

And it's because of this devastating capability that many people say there's really no difference between a strategic and tactical weapon when used in war.

“I don’t think there is any such thing as a ‘tactical nuclear weapon," said former US Defense Secretary James Mattis, during a congressional hearing in 2018. "Any nuclear weapon used any time is a strategic game-changer,” said Mattis. 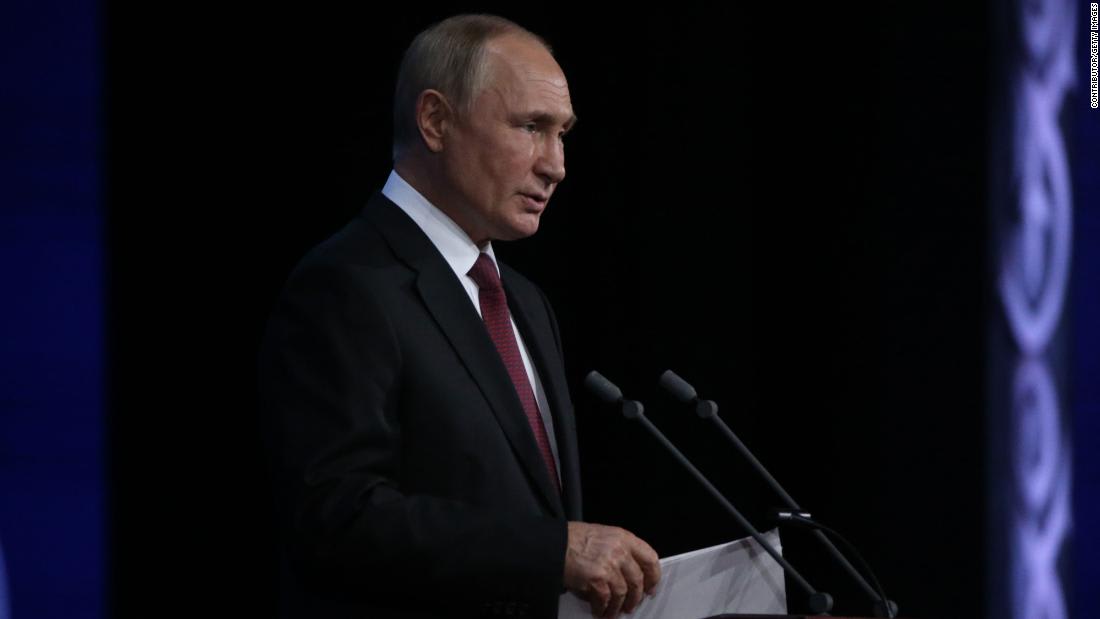 Two drones launched by Russian forces into the Odesa region in Ukraine hit a military infrastructure facility, causing a fire and the detonation of ammunition, the Ukrainian military’s Operational Command South said on Monday.

“During the night, the enemy attacked the Odesa region with kamikaze drones,” the command said in a statement on Telegram. “Due to a large-scale fire and detonation of ammunition, it was decided to evacuate civilians.”

One drone was destroyed by the Ukrainian air defense forces. No casualties have been reported, and firefighting and rescue operations continue, the command added.