Georgia may have to reconsider its policy of allowing Russian citizens to enter the country on humanitarian grounds if the number of people increases drastically, a Georgian official told CNN Thursday.

Upwards of 60,000 Russian citizens have entered the country over the past week, according to Samkharadze, who said that “at least 40% of them” are ethnic Georgians who had Russian citizenship, and “now are coming back and they are rejoining their families or relatives.”

“We cannot close the border because that would be in favor of Putin, because he wants to mobilize these people and send them to fight in Ukraine,” Samkharadze said. “It will be a heavy burden for the social fabric of the country and also for the budget of our small country.”

He said his country of 3.7 million people was already dealing with the strain of displaced people from elsewhere in the world, including 250,000 from the occupied regions of Abkhazia and Tskhinvali, 30,000 Ukrainians and 15,000 Belarusians.

Why Russians are leaving home: President Vladimir Putin's mobilization announcement for the war in Ukraine sparked protests and an exodus of Russian citizens as the Kremlin tightened rules around evading military orders.

The number of Russians fleeing the country to avoid call-up “likely exceeds” the number of troops that invaded Ukraine in February, the UK Ministry of Defense said Thursday.

US Secretary of State Antony Blinken in a statement on Thursday called Russia’s so-called referendums in occupied-parts of Ukraine “a futile effort to mask what amounts to a further attempt at a land grab.”

He reiterated that “the United States does not, and will never, recognize the legitimacy or outcome of these sham referenda or Russia’s purported annexation of Ukrainian territory."

“This spectacle conducted by Russia’s proxies is illegitimate and violates international law,” Blinken said in the statement. “It is an affront to the principles of international peace and security.”

“The United States and our allies and partners will continue to assist Ukraine in its fight to defend its territory against Russian aggression,” Blinken added.

On Tuesday, Blinken made clear that Ukraine would be able to use weapons provided by the United States to regain its territory, including in the regions that are expected to annexed by Russia Friday.

“I've also been equally clear that Ukraine has the absolute right to defend itself throughout its territory, including to take back the territory that has been illegally seized in one way or another by Russia,” he said in response to a question from CNN’s Kylie Atwood at a news conference Tuesday.

“Because there is no change at all in the territory that is being annexed by the Russians as a matter for us or for the Ukrainians, the Ukrainians will continue to do what they need to do to get back the land that has been taken from them. We will continue to support them in that effort,” Blinken said at the news conference.

It comes after the area experienced frequent shelling in the past few months.

IAEA experts present at the plant were informed Thursday "about two more landmine explosions outside the plant perimeter fence, bringing the total to five this week," IAEA said in a statement.

One explosion occurred Wednesday afternoon "in the area of a channel transporting water to the plant for its cooling system, which is essential for nuclear safety. It did not cause any damage," IAEA said.

The second explosion "took place at 1pm today some 500 metres from reactor unit 1. There was no major damage, but further investigations will be conducted."

"As the previous three landmine explosions reported by the IAEA this week, they were believed to have been caused by animals," it added.

Separately, Grossi said that the IAEA is organizing the third assistance shipment of equipment to Ukraine this week "as part of efforts to help ensure nuclear safety & security during the current conflict."

The EU’s Energy Commissioner has called for a price cap on Russian gas exports to the EU Thursday.

“I strongly believe we need a price cap on all Russian gas imports, at a level that still makes it attractive for them to export to Europe,” EU Energy Commissioner Kadri Simson said in a statement on Thursday as the bloc looks at ways to tackle the energy crisis.

“Europe is facing energy blackmail by Russia, and global demand for gas is higher than supply,” she said, calling Russia’s unreliability as a partner “the origin of the problem.”

“We are negotiating with our reliable suppliers of pipeline gas. If this doesn’t bring results, then a price cap is possible,” Simson added, saying that “these steps will reduce the cost of gas imports.”

The commissioner’s comments come a day before EU energy ministers meet in Brussels to address high energy prices. According to the commission, the leaks of the Nord Stream gas pipelines in the Baltic Sea will also be discussed.

Biden was speaking at FEMA headquarters in Washington, DC about the federal response to Tropical Storm Ian.

"Let's stick with this, okay?" Biden said when asked by a reporter if he held Russia responsible for the damage.

Pressed by reporters on the matter, Biden continued: "There's a lot of important international issues, but we're here to talk about America. Thank you."

Officials are still investigating the leaks: US officials say they do not have a thorough explanation yet for what happened, days after the explosions appeared to cause three separate and simultaneous leaks in the two pipelines Monday.

The leaks have been described by NATO's chief and several European leaders as "acts of sabotage."

The Kremlin has said any claims it targeted the pipelines are "absurd" and spokesperson Dmitry Peskov said Thursday the "unprecedented nature" of the leaks suggests they may have been the result of a possible "terrorist attack."

At a meeting of former Soviet states Thursday, Russian President Vladimir Putin called on leaders to help him create a “more just world order” and claimed the West was inciting conflicts on their territory.

Putin directed his comments to the heads of intelligence agencies for what's known as the Commonwealth of Independent States, which comprises nine former Soviet republics.

“We are witnessing a difficult process of forming a more just world order,” Putin said.

“We also know that the West is working out scenarios for inciting new conflicts in the CIS space. But we already have enough of them. It is enough to look at what is happening now between Russia and Ukraine, what is happening on the borders of some other CIS countries."

More background: Putin and other prominent Russian leaders have repeatedly framed the invasion of Ukraine as part of a broader struggle to maintain freedom from Western power and resist "Russophobic" foes.

In four occupied regions of Ukraine, analysts believe Putin will use Russia-backed referendums — held in violation of international law — to frame the fighting as the defense of his nation's own territory, rather than an invasion. 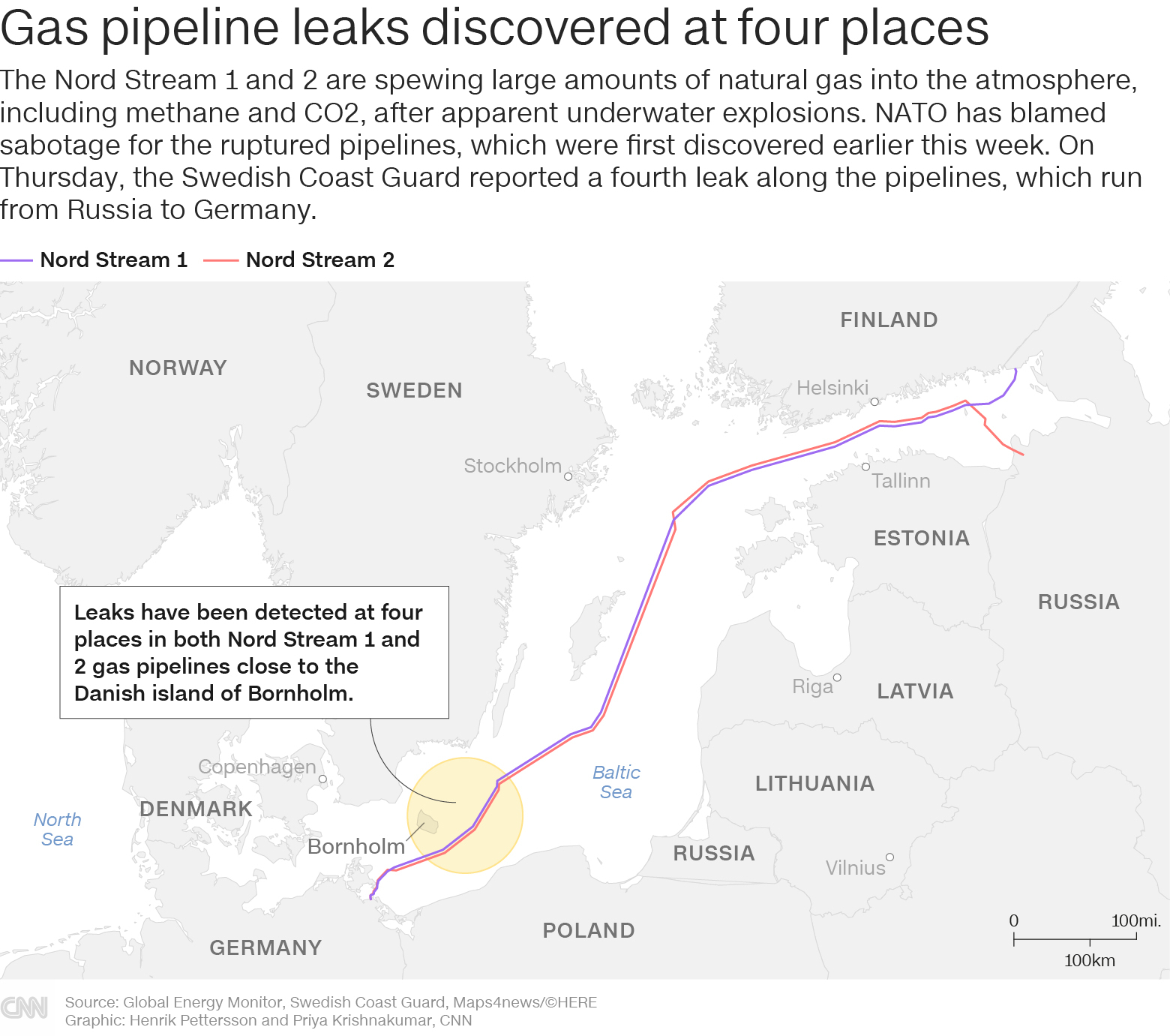 Seismologists with a Danish geological agency may have recorded a third explosion connected to the Nord Stream gas pipeline leaks this week, officials said.

The blast may have occurred at the same time as the second explosion recorded Monday, the Geological Survey of Denmark and Greenland (GEUS) said in a statement Thursday.

GEUS cautioned its seismologists had “reservations” about the analysis, “because the signals from the potential third blast may also be reflections from the second blast that occurred at 07.03 PM on 26 September.”

Earlier this week, GEUS announced that it recorded “shaking” twice Monday in the Baltic Sea. Experts said the signals recorded “do not resemble signals from earthquakes” but “resemble the signals typically recorded from blasts.”

The Swedish National Seismic Network also said it detected two explosions near the area of the Nord Stream pipelines during that timeframe.

Some context: NATO's chief and several European leaders have described the leaks as "acts of sabotage," but Western officials have stopped short of attributing the attack to Russia or any nation.

European security officials observed Russian navy ships in the vicinity of leaks Monday and Tuesday, according to Western intelligence officials and one other source.

The Kremlin has said any claims it targeted the pipelines are "absurd" and spokesperson Dmitry Peskov said Thursday the "unprecedented nature" of the leaks suggests they may have been the result of a possible "terrorist attack."

More than 200,000 people have traveled from Russia into Georgia, Kazakhstan and the EU since Russian President Vladimir Putin announced the immediate “partial mobilization” of Russian citizens on Sept. 21, collective data from various countries shows.

Here's a breakdown of the numbers:

More on Putin's order: Russia’s mobilization announcement for its war in Ukraine sparked protests and an exodus of Russian citizens from the country, as the Kremlin tightened rules around evading military orders. Russian Defense Minister Sergei Shoigu announced on Sept. 21 that up to 300,000 men with previous military experience will be drafted.

The number of Russians fleeing country to avoid call-up “likely exceeds” the number of troops that invaded Ukraine in February, the UK Ministry of Defense said Thursday.

Meanwhile, Kremlin spokesperson Dmitry Peskov said Tuesday he does not know the number of people who have left the country since the announcement. Independent Russian media outlet Novaya Gazeta Europe on Tuesday cited a source in the Russian presidential administration as saying the FSB (Federal Security Service of Russia) reported 261,000 men fled Russia since the announcement of the mobilization on Sept. 21.

President Vladimir Putin is set to sign agreements Friday that will absorb into Russia thousands of square miles of Ukrainian territory in what will be the largest forcible annexation of land in Europe since 1945.

The agreements will be signed at a ceremony at the Kremlin, three days after hastily-conducted referendums concluded in the four areas of Ukraine that Moscow will now consider Russian territory.

Putin will deliver a speech and meet with Russian-backed leaders of the four occupied regions, according to the Kremlin.

Ukraine and its western allies have categorically rejected the planned annexation of the four regions – Donetsk, Luhansk and much of Kherson and Zaporizhzhia, a swathe of Ukrainian land that contains heavy industry, rich farmland and a critical freshwater conduit for Crimea.

Donetsk and Luhansk are home to two breakaway republics that Moscow has backed since 2014, while Kherson and parts of Zaporizhzhia have been controlled by Russian forces since shortly after the invasion began in late February.

Ukrainian President Volodymyr Zelensky has asserted that if the Kremlin presses ahead with annexation, any negotiation with Putin will be impossible.

In all, Russia plans to raise its flag over some 100,000 square kilometers (38,600 square miles) of Ukrainian territory in what is a flagrant breach of international law and after votes dismissed by the great majority of countries, including some friends of Russia like Serbia, as null and void.

While the international community will reject Russia’s plan almost in unison (expect a few outliers like Syria and North Korea), annexation does change the “facts on the ground” and diminishes the prospects for any negotiated settlement.

There’s a huge difference between withdrawing from occupied land (as the Russians did in April when they pulled back from much of northern Ukraine) and giving up areas that has been formally and ceremonially absorbed into the motherland – especially for a leader like Putin who is fixated with a “greater Russia.”