Pavlo Kyrylenko, head of Donetsk region military administration, has claimed that the Ukrainian military still controls the town of Soledar -- although some Ukrainian units in the area have said they are only on the town's outskirts.

Speaking on Ukrainian television, Kyrylenko said that: "The enemy is suffering heavy losses, covering its way with the bodies of Wagner [fighters] and regular army soldiers."

He added that "the situation is difficult but controlled. The military command is taking all necessary measures to stabilize the situation."

Kyrylenko said seven civilians had been evacuated from the town on Friday, but 550 remained in the town, which is without power and where few buildings remain undamaged.

Kyrylenko insisted that "the humanitarian situation in the city is under control. There is a food supply and shelters for local residents."

Russia said Friday its forces had taken the small town of Soledar in eastern Ukraine following weeks of fierce fighting, in what would be Moscow’s first notable victory in months, although Ukraine denied the claim.

Russian media said Friday that dozens of residents of Soledar had left for Russian-controlled parts of Donetsk.

The capture of Soledar would represent a symbolic if not an especially strategic win for Putin after a long string of military setbacks dating back to last summer. But it does not suggest a significant capitulation of Ukrainian forces, nor a substantial change to the overall complexion of the war. 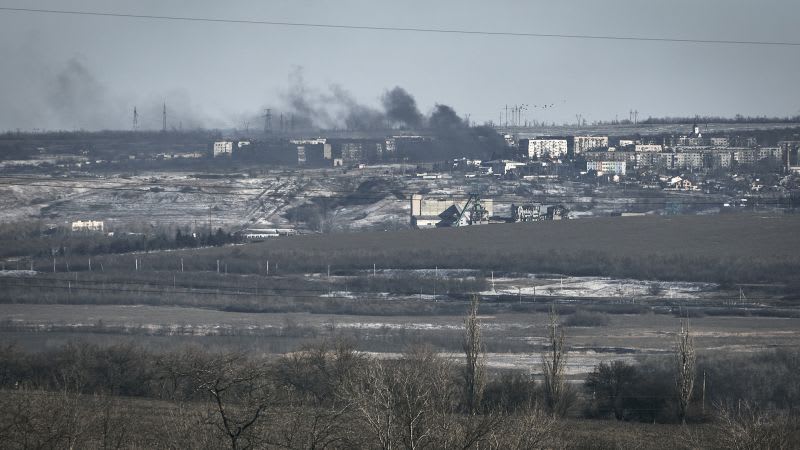 Britain will send 12 Challenger 2 tanks to Ukraine as part of efforts to "intensify" support for the Ukrainian defense against Russia, according to Downing Street.

UK Prime Minister Rishi Sunak "outlined the UK’s ambition to intensify" it's support to Ukraine, "including through the provision of Challenger 2 tanks & additional artillery systems," during a phone call with Ukrainian President Volodymyr Zelensky on Saturday, Downing Street said.

In a post on his official Telegram channel Saturday, Zelensky said he thanked Sunak "for the decisions that will not only strengthen us on the battlefield, but also send the right signal to other partners."

The Western alliance’s response to Russia’s invasion of Ukraine received a shot in the arm this week as multiple European nations for the first time answered Zelensky’s longstanding call to supply modern battle tanks to Kyiv.

France and Poland have pledged to soon send tanks for the Ukrainian military to use in its efforts to protect itself from Russia. Finland is also considering following suit.

Ukrainian President Volodymyr Zelensky said it's a sign of failure for Moscow that there is Russian infighting about who deserved the most credit for “tactical advancement” in the town of Soledar.

Zelensky said during his nightly address Friday there have been “324 days of full-scale war, and how everything has changed for Russia ... They are already at each other's throats over who to attribute some tactical advancement to.”

“This is a clear signal of failure for the enemy. And this is another incentive for all of us to put more pressure on the occupier and to inflict greater losses on the enemy,” he said.

The Russian Defense Ministry on Friday claimed that it had captured the eastern Ukrainian town of Soledar. The Ukrainian military said however that fighting was ongoing. The battle became a point of contention between the Wagner private military company, whose mercenaries did much of the frontline fighting, and the Russian Ministry of Defense, who had publicized competing claims about their roles in the fight.

“The difficult battle for Donetsk region continues,” Zelensky said. “The battle for Bakhmut and Soledar, for Kreminna, for other towns and villages of the east of our country continues.”

“Although the enemy has concentrated its greatest forces in this direction, our warriors – the Armed Forces of Ukraine, all defense and security forces – are defending the state,” he said.

New video from the town of Soledar in Donetsk region shows a massive explosion at a building that appears to have been a shelter for Russian troops.

The video shows between a dozen and 20 soldiers walking along a railroad track before turning along a street on the northern outskirts of the town, which Russia on Friday claimed to have taken, although Ukraine denied that.

After the soldiers reach a building with a distinctive green roof, the explosion destroys the building, with debris flying upwards. The video has been geolocated by CNN.

A longer version of the video has been posted by a Ukrainian soldier in the area.

The soldier, with the codename Madiar, is a commander in a Ukrainian aerial reconnaissance unit. He provides a commentary over the video, saying: "There are 10 of them. There are 10 more here. And all of them obviously going in the same direction. They are settling in. In groups of 20+ people. In the houses. On the outskirts of Soledar.

"In the morning we've been watching this place," he says. "There was some kind of activity there. Something was being loaded and unloaded."

He describes the building with the green roof as "some kind of a headquarters for them."

Madiar says there should be at least 25 Russian soldiers there.

He then asks: "What should we do? HIMARS or MLRS?" before the explosion is seen.

HIMARS artillery provided by the United States has proved an accurate and powerful weapon for Ukrainian forces.

The Western alliance’s response to Russia’s invasion of Ukraine received a shot in the arm this week as multiple European nations for the first time answered President Volodymyr Zelensky’s longstanding call to supply modern battle tanks to Kyiv.

France and Poland have pledged to soon send tanks for the Ukrainian military to use in its efforts to protect itself from Russia. The UK and Finland are considering following suit.

The moves have piled pressure on Germany, which last week said it would transfer infantry fighting vehicles to Kyiv but is yet to commit to sending tanks.

German Chancellor Olaf Scholz has insisted that any such plan would need to be fully coordinated with the whole of the Western alliance, including the United States.

Western officials told CNN said that the decision by some countries but not others to send more tanks was part of a broader assessment of what was happening on the ground in Ukraine.

NATO allies have spent recent weeks talking in detail about which countries are best placed to provide specific types of assistance, be it military equipment or money.

Several powerful explosions were heard in the Ukrainian capital, Kyiv, on Saurday morning, though the exact locations could not be immediately determined, with thick fog over the city.

Kyiv City Military Administration said Saturday: "There is an attack on the capital."

Kyrylo Tymoshenko, Deputy Head of the Office of the President, said on Telegram: "Missile attack on critical infrastructure facilities. Details are being clarified."

Kyiv's mayor, Vitaliy Klitschko, said the strikes had occurred on the city's east bank, "Explosions in Dniprovskyi district. All services are heading to the scene. Stay in shelters!" he wrote on Telegram.

Klitschko added that debris from one incoming missile fell on a non-residential area in the city's west bank of the capital, known as Holosiivskyi district. "There were no casualties," he said.

The head of the International Atomic Energy Agency will travel to Ukraine next week to set up a constant presence of safety experts at all of the country's nuclear power plants.

"Director General Rafael Mariano Grossi will be in Ukraine next week to establish a continuous presence of nuclear safety and security experts at all the country’s nuclear power facilities, significantly stepping up the efforts of the International Atomic Energy Agency (IAEA) to help prevent a nuclear accident during the current military conflict," according to the statement from the UN's nuclear watchdog.

While the Russian-controlled Zaporizhzhia nuclear plant already has IAEA team members on location, experts will also be stationed at the Khmelnitsky nuclear power plant in western Ukraine in "the coming days." The IAEA said Grossi will travel to the South Ukraine and Rivne nuclear power plants — as well as to the Chernobyl site — to set up the missions of two IAEA members at each site.

Grossi will also meet with senior Ukrainian government officials in Kyiv to discuss setting up a repeatedly called-for nuclear safety and security protection zone around Zaporizhzhia. Kyiv has accused Russia of using the plant as cover to launch attacks, knowing that Ukraine could not return fire without risking hitting one of the plant’s six reactors. Moscow, meanwhile, claimed Ukrainian troops were targeting the site.

“I remain determined to make the much-needed protection zone a reality as soon as possible. My consultations with Ukraine and Russia are making progress, albeit not as fast as they should. I remain hopeful that we will be able to agree and implement the zone soon,” Grossi said.

According to the statement, the Zaporizhzhia plant’s last remaining 330 kilovolt backup power line has been reconnected to the plant, after experiencing disconnections in the last week.

Grossi also "reiterated his serious concerns about the pressure that ZNPP staff are facing, with potential consequences for nuclear safety and security," according to the statement.

“The reduced ZNPP staffing levels combined with psychological stress due to the on-going military conflict and the absence of family members who fled the area have created an unprecedented situation that no NPP staff should have to endure,” he said.

The Russian Defense Ministry is crediting the private military company Wagner for spearheading the "direct assault" on Soledar after days of squabbles. While Russia said it is in control of the city in eastern Ukraine, officials in Kyiv say fighting is ongoing.

An international team of nuclear safety experts will travel to Ukraine next week to establish a presence at all of the country's nuclear power plants.

Catch up on the latest developments in the war: 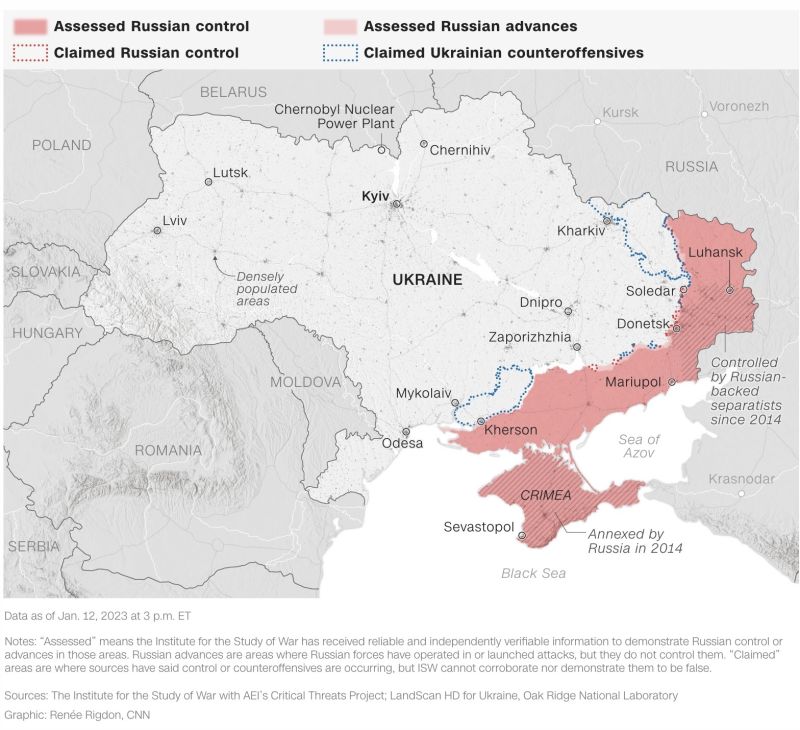