We've wrapped up our live coverage for the day. You can read more on Russia's invasion of Ukraine here, or scroll through the updates below.

The CNN film “Navalny” follows Russian opposition leader Alexey Navalny, who was poisoned in August 2020 with a nerve agent during a flight to Moscow.

The film paints an intimate portrait of one of Russian President Vladimir Putin’s fiercest critics and takes viewers inside the harrowing search for answers following his poisoning.

When and where to watch

“Navalny” airs on CNN on Saturday at 9 p.m. ET. You can also watch now on CNNgo and HBO Max.

Navalny is a Russian opposition leader, Kremlin critic and activist. He has been a prominent organizer of street protests and has exposed corruption in the Russian government on social media.

Earlier this year, Navalny was sentenced to nine years in prison on fraud charges he said were politically motivated.

Where is Navalny now?

Navalny has been transferred into a solitary prison cell, according to tweets from himself and his staff, in what he described as a move designed to “shut me up.”

Even while behind bars, his Instagram and Twitter accounts keep up his attacks on Putin. “He passes hundreds of notes and we type them up,” according to Navalny’s chief investigator, Maria Pevchikh.

His defiance, according to his political team, has put him in a race against time with the Russian autocrat. The question, according to Pevchikh, is whether he can outlast Putin and the war in Ukraine – and on that, the verdict is still out. “So far, touch wood, they haven’t gone ahead with trying to kill him again,” she told CNN.

Navalny's daughter, Dasha Navalnaya, who is currently studying at Stanford University in California, told CNN her father is being systematically singled out for harsh treatment.

Prison authorities are repeatedly cycling him in and out of solitary confinement, she said. “They put him in for a week, then take him out for one day,” to try to break him, she said. “People are not allowed to communicate with him, and this kind of isolation is really purely psychological torture.”

His wife Yulia, who said she received a letter from Navalny on Wednesday, has also raised concerns about his health. She said he has been sick for over a week, and that he is not getting treatment and is forced off his sick bed during the day.

At least 531 Russian doctors as of Wednesday signed an open letter addressed to Putin to demand that Navalny should be provided with necessary medical assistance, according to the Facebook post where the letter was published. 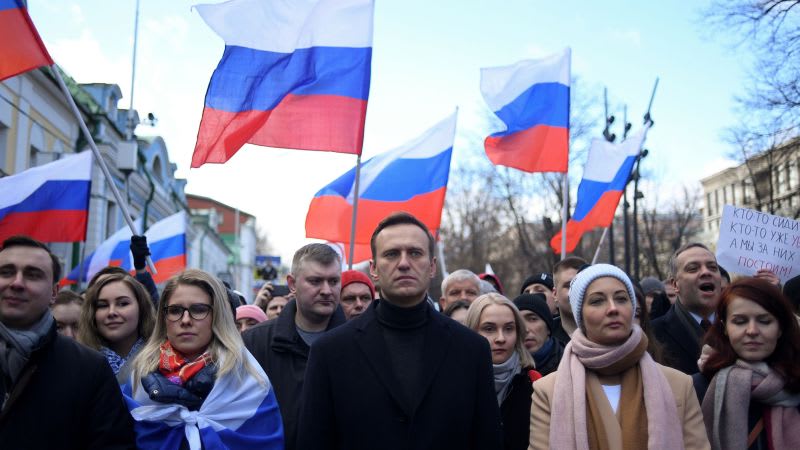 Defiant Navalny has opposed Putin's war in Ukraine from prison. His team fear for his safety | CNN

The death toll from a Russian missile strike on an apartment block in the city of Dnipro has risen to 12, according to Valentyn Reznichenko, the head of the Dnipropetrovsk regional military administration.

Reznichenko shared the update in a post on his official Telegram page.

He also shared apparent video of the rescue effort, thanking the first responders who worked late into Saturday night local time to find anyone else buried in the rubble.

The founder and head of Wagner, Yevgeny Prigozhin, posted a video Saturday claiming he visited Soledar after it was taken over by his mercenaries "in two weeks."

Kyiv has disputed Wagner's claim that it now controls the small town, which holds significant symbolic value but is not considered strategically pivotal. The town has also caused infighting between Prigozhin's private forces and Russia's Defense Ministry over who deserves credit for the assault.

In the video, the Wagner mercenary leader said he came to town to award medals to his fighters — who he says were almost exclusively responsible for capturing Soledar.

The video shows Prigozhin standing with a man who he calls “a commander who helped to take over Soledar.”

“Soledar was taken over in two weeks,” Prigozhin said. “Soledar was squeezed by our claws and then was divided into parts. You can’t eat an elephant all at once, like they say. You have to cut it in parts.”

The private military contractor has heavily recruited from Russian prisons over the last nine months. Previously it has deployed contingents to Syria and several African countries.

Prigozhin credited what he described as a wealth of fighting equipment and communications systems for giving his force an edge in battle.

What Ukraine is saying: Kyiv's military has said that Wagner fighters, some without body armor and carrying only grenades, have been killed in their hundreds after launching one assault after another against Soledar.

The Ukrainian military said late Saturday that heavy battles for the town continue, with one regional leader describing the situation as "difficult but controlled."

More on Wagner's leader: Prigozhin has been an increasingly visible figure in the conflict in Ukraine, visiting Wagner fighters on the front line and meeting former convicts who have completed their six-month tour of duty with Wagner. Prigozhin had promised them that in return for fighting they would be pardoned and be able to return home, rather than to prison.

He has frequently contrasted the achievements of his Wagner fighters with what he has criticized as the poor leadership of the military establishment in Russia — a rare example of open disagreement within Russia about the conduct of the Ukraine campaign.

Ukrainian President Volodymyr Zelensky said “Russian terror” can only be stopped on the battlefield in his nightly address Saturday.

“Can Russian terror be stopped? Yes.” Zelensky said. “Is it possible to do it somehow differently than on the battlefield in Ukraine? Unfortunately, no. This can and must be done on our land, in our sky, in our sea,” he emphasized.

To achieve these aims, Zelensky said he was convinced Ukraine needs “weapons that are in the warehouses of our partners and that our troops are so waiting for.”

“No amount of persuasion or just passing the time will stop the terrorists who are methodically killing our people with missiles, drones bought in Iran, their own artillery, tanks and mortars,” Zelensky added.

“Unfortunately, energy infrastructure facilities have been also hit," Zelensky said. “Repair crews are doing their best to restore power generation and supply as soon as possible, and work will continue around the clock.”

Zelensky also said that Ukrainian forces had shot down more than 20 Russian missiles on Saturday, of more than 30 fired on the country. “These are hundreds of saved lives,” he said.

Earlier Saturday, Gen. Valeriy Zaluzhnyi, the commander-in-chief of the Ukrainian Armed Forces, said Russia had “made about 28 launches of cruise missiles of various types and 5 launches of guided aircraft missiles."

Zelensky also commented on the deadly Russian missile strike against a residential apartment building in the city of Dnipro earlier Saturday.

“All floors of this building – from the second to the ninth – were smashed in the explosion of a Russian missile,” Ukraine’s president said. “It was possible to save dozens of people – wounded, traumatized, treatment is being provided to them. Among them are children, the youngest girl is three years old.”

According to Zelensky “debris clearance is still ongoing and will continue throughout the night.”

“It's not yet known how many people are under the rubble,” he added. “Unfortunately, the death toll is growing every hour.”

Nine people, including one teenager, were killed when a Russian missile hit an apartment block in the city of Dnipro Saturday, according to the deputy head of the Ukrainian president's office.

The teenager killed was a 15-year old girl, Kyrylo Tymoshenko said in an update on Telegram.

Search and rescue operations at the site continued into Saturday night.

The Ukrainian Air Force says the Russian missile that hit an apartment block in Dnipro Saturday, killing nine people and injuring dozens, was a Kh-22 — an older type of cruise missile that is a less accurate weapon than most modern missiles.

Yurii Ihnat, spokesman for the Ukrainian air force, said the Kh-22 "was fired from a Tu-22M3 long-range bomber, launched from the area near Kursk and the Sea of Azov."

"There were a total of five launches of these missiles," Ihnat said.

CNN reported last June that it was a Kh-22 that hit a shopping center in Kremenchuk in central Ukraine.

Originally designed as an anti-ship missile, the Kh-22 carries a warhead of nearly one metric tonne. But Western analysts say it is only accurate to a radius of about 500 meters (about 1,600 feet).

The Russian Defense Ministry said the target in June was a facility that repaired military vehicles, which was several hundred meters from the shopping center. At least 18 people were killed in that attack.

Speaking of Saturday's attack, Ihnat said: "They hit with such a missile a densely populated city with people, women, children. There is no explanation and justification for this terrorist act."

Russia has used the Kh-22 throughout its campaign in Ukraine, drawing on stocks estimated to be in the thousands.

CNN has not independently verified the type of missile used in the strike.

The State Emergency Service of Ukraine said that one child was killed in the Russian missile strike on an apartment block in the central city of Dnipro.

"Five people died including one child," according to its Telegram account.

The SES also said 64 people, including 14 children, were injured.

"The damaged and surviving parts of the block are being inspected. The search for people under the rubble is being organized," it said.

Thirty-five people, including six children, were rescued from the wreckage, according to the SES.

The White House condemned Russia's latest bombardment of Ukraine on Saturday, which targeted utility infrastructure and led to at least five deaths, according to Ukrainian officials.

“These strikes are another example of the brutal and barbaric war Russia is waging, attacking Ukraine’s critical infrastructure — which provides light and heat to Ukrainian civilians,” a spokesperson for the National Security Council said in a written statement.

"The United States will continue to provide Ukraine with what it needs to defend itself, including air defense systems, along with our allies and partners – and we will continue our work to hold Russian forces accountable for their war crimes and atrocities. Russia continues to underestimate the strength and resolve of the Ukrainian people, and these latest attempts to demoralize them will fail yet again,” the spokesperson said.

Some background: Last week, the US announced its largest aid package to Ukraine since the war began — $2.85 billion worth of US equipment, including 50 Bradley Fighting Vehicles, 500 TOW anti-tank missiles and tens of thousands of rounds of 25mm ammunition.

Ukrainian troops are also set to begin training on the Patriot missile system in the United States as soon as next week, the Pentagon announced earlier this week.