In his nightly address Sunday, Ukraine’s president addressed the devastating Russian missile strike on an apartment building in the central city of Dnipro.

“Dozens of people were rescued from the rubble, including six children,” Zelensky said. “We are fighting for every person. The rescue operation will last as long as there is even the slightest chance to save lives.”

“There are reports that two children lost their parents,” the president added.

A regional leader said earlier Sunday that the death toll has risen to 30 in the missile strike, with another 75 people hospitalized.

A CNN team was on the ground in Dnipro Sunday and reported that the operation appeared to be shifting to more of a recovery effort than a rescue mission.

The cold and densely packed wreckage of the building suggested hopes of finding anyone else alive were diminishing. But dozens of emergency service workers remained at the scene some 30 hours after the blast.

Zelensky also said on Sunday that a decision was made “to expand our sanctions against Russian citizens and other persons who help terror.”

“We will do everything to make the sanctions work on the largest possible scale — in Europe, in the world,” he said.

He did not specify the actions further.

CNN's Tim Lister contributed to this report from Dnipro, Ukraine.

The fight for the embattled eastern town of Soledar is ongoing, Ukrainian President Volodymyr Zelensky said in his nightly address Sunday.

“The battle for Soledar, for Bakhmut, for the whole Donetsk region, for the Luhansk region continues without any respite, without any stop,” Zelensky said, referring to eastern territories that have seen some of the conflict's fiercest fighting.

Russia claims its forces have taken Soledar after weeks of brutal clashes, which Kyiv has denied. The leader of the Wagner mercenary group has taken credit for the bulk of the fighting on Moscow's side and claimed victory there, as well. 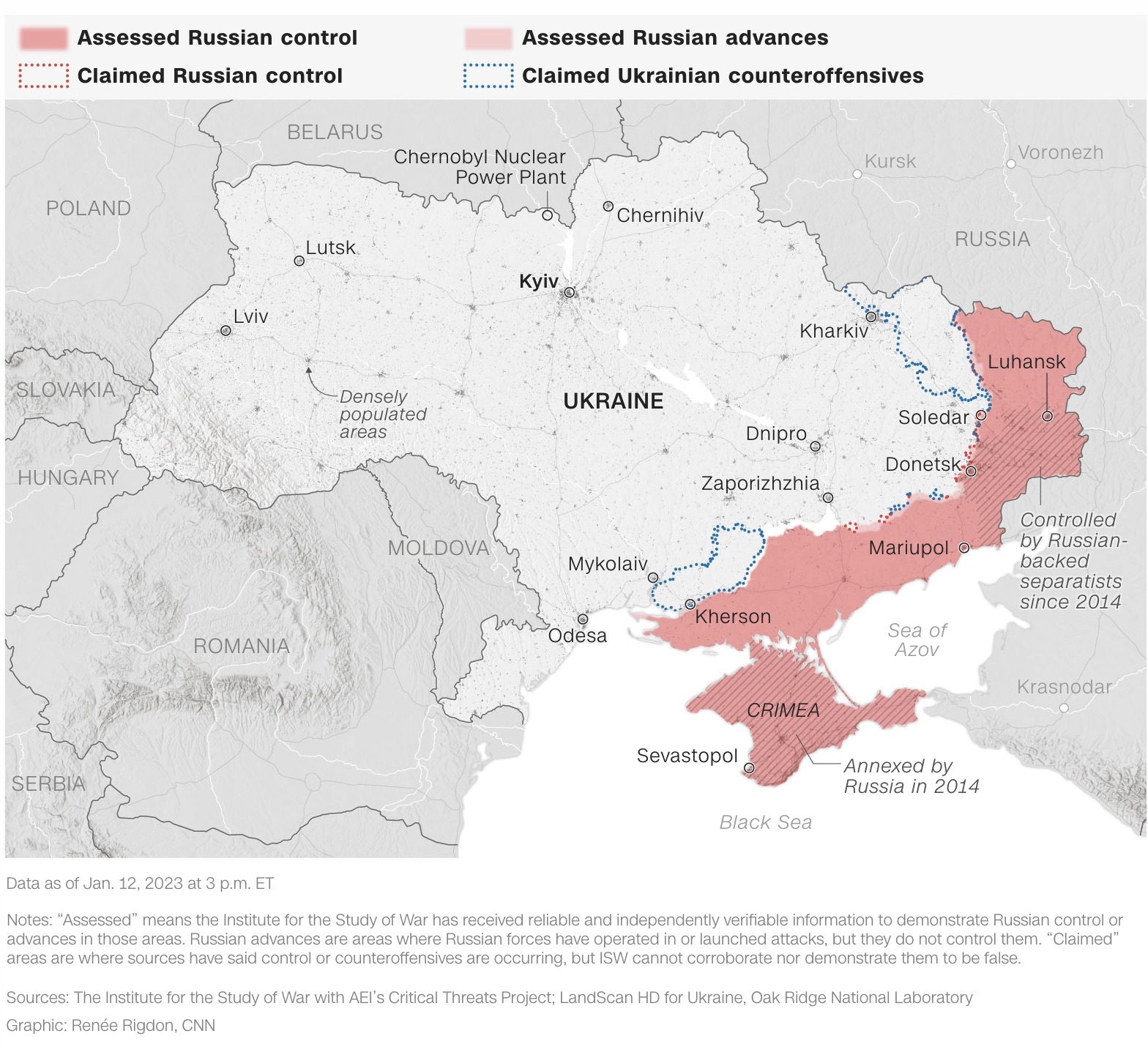 He is pitching himself and his Wagner mercenary group as the real patriots, in contrast to what he derides as the corrupt and incompetent military hierarchy. The language is getting harsher, and the stakes higher.

In the last few weeks, Prigozhin has been seen close to the frontlines in the occupied eastern region of Donetsk, delivering oranges to the troops or grimly reviewing body bags, and engaging with his fighters in unvarnished and sometimes crude language.

On Saturday, he posted a video claiming he had just visited his troops in the brutally contested town of Soledar, praising his forces for what he claimed was best-in-the-world fighting prowess.

He rarely misses an opportunity to take a swipe at the establishment. Somewhere in Donetsk earlier this month, Prigozhin told his fighters: “Once we conquer our internal bureaucracy and corruption, then we will conquer the Ukrainians and NATO."

For Prigozhin, the chief bureaucrat that he has in mind is Defense Minister Sergei Shoigu. The two appear to have fallen out over lucrative military contracts given to and then taken from Prigozhin’s Concord Group, as well as Wagner’s controversial role in Syria.

A clash over credit in Soledar: Prigozhin said Friday that it was “exclusively” his troops who have made purported gains around Soledar in recent days.

In a filmed exchange with his fighters, Prigozhin asked provocatively: “Other than Wagner PMC, who else is here?”

“No one else!” they replied.

Ukrainian forces continue to deny that Soledar has fallen and even Prigozhin has acknowledged that fighting continues there.

Regardless, the mercenary leader's ambitions have not gone unnoticed in Washington, DC.

US Deputy Assistant Secretary for Defense Laura Cooper said in a briefing Friday: “In the recent past, we’ve seen that Wagner is advancing at a more rapid clip than any other unit in the Russian military.”

Read more analysis on Prigozhin's role in the war here.

The death toll from a Russian missile strike on an apartment building in Dnipro, Ukraine, has risen to 30, according to Natalia Babachenko, adviser to the head of Dnipropetrovsk region military administration, in an interview with Ukrainian media.

Babachenko also said the rescue operation is ongoing, adding that there could be up to 30 or even 40 people still under the rubble.

Following the strike, 75 people went to the hospital, 30 of whom remain there, Babachenko said.

Babachenko added that 12 of those hospitalized remain in serious condition, including a 9-year-old girl. The young girl was walking near the apartment block when the missile hit, the adviser said.

On Sunday, the premises of a local Red Cross facility, a rehabilitation center for children with disabilities, an area surrounding a student dormitory, as well as a critical infrastructure facility came under fire, Yaroslav Yanushevych, the head of Kherson's military administration wrote on Telegram.

According to the official, Russian shelling caused a fire to break out on the premises of the Red Cross facility. “Rescuers are currently working to eliminate the fire,” he added.

Yanushevych reported that windows and doors were blown out as a result of a Russian strike on the rehabilitation center for children with disabilities.

He said that at least seven people were injured in the Russian shelling of Kherson city, with one of them in a serious condition.

The city of Kherson was freed from Russian occupation in Nov. 2022.

Grain is once again leaving Ukrainian ports. The price of fertilizer is falling sharply. Billions of dollars in aid has been mobilized.

Yet the world is still in the grips of the worst food crisis in modern history, as Russia’s war in Ukraine shakes global agricultural systems already grappling with the effects of extreme weather and the pandemic. Market conditions may have improved in recent months, but experts do not expect imminent relief.

That means more pain for vulnerable communities already struggling with hunger. It also boosts the risk of starvation and famine in countries such as Somalia, which is contending with what the United Nations describes as a “catastrophic” food emergency.

Before Russia invaded Ukraine, the price of food was already at its highest level in a decade due to scrambled supply chains and extreme weather events, such as the worst drought in almost a century in central and southern Brazil. Record prices for natural gas — a key input to make nitrogen-based fertilizers — had also become a nightmare for farmers.

Then came the war. Ukraine normally supplies about 45 million metric tons of grain to the global market every year and is the world’s top exporter of sunflower oil. Together with Russia, it accounted for about one quarter of global wheat exports in 2019. As Russian troops blockaded the country’s ports, the strained food system was dealt another shock — this one even harder to bear.

“The Ukraine crisis has had this ongoing negative impact on world food prices and (added) even more volatility,” said Abby Maxman, CEO of Oxfam America. “The supply chains and how they flow to places like East Africa and the Horn of Africa are taking big hits.”

That drove the Food Price Index developed by the UN’s Food and Agriculture Organization to its highest annual level on records dating back to 2005, rising more than 14% compared to 2021. In 2022, the number of people grappling with acute food insecurity — meaning their access to food was so restricted that it threatened their lives and livelihoods — shot up to 345 million from 135 million in 2019.

A CNN reporting team is now on the scene of the deadly Russian missile strike on an apartment building in Dnipro.

Cranes continue to work on removing the hundreds of tons of debris. Smoke is still rising from within the nine-story apartment building that was leveled. On either side of it, concrete sheets hang precariously from neighboring blocks.

The missile appears to have struck vertically, as there is little damage in the surrounding area.

The operation appears to be shifting toward recovery as of about 7 p.m. local time (noon ET), some 30 hours after the missile struck.

There are still dozens of emergency service workers at the scene, but the cold and the densely packed wreckage of the building suggest that hopes of finding anyone else alive are diminishing.

Behind a cordon across the street, dozens of people watch the operation in silence.

The death toll currently stands at 29, with some people still unaccounted for, according to Ukrainian officials.

The death toll from a Russian missile strike on an apartment building in the central Ukrainian city of Dnipro has risen to 29, according to a leader in the region.

At least 73 people were injured in the attack, with 30 of them still in the hospital, said Valentyn Reznichenko, the head of the Dnipropetrovsk regional military administration. He shared the update in a post on his official Telegram page Sunday.

At least 12 of the hospitalized victims are in critical condition, he said.

“This afternoon, a 27-year-old woman was pulled out of the rubble,” Reznichenko continued. “She is in intensive care with severe hypothermia. Doctors are fighting for her life.”

According to Reznichenko, 39 residents of the apartment building were rescued from the rubble. “The fate of more than 40 people is unknown,” he added.

Reznichenko said that firefighters have finally extinguished the fire that started in the building as a result of the strike and "about half of the structures destroyed by the Russian strike have already been dismantled."

The rescue operation is ongoing with more than 550 rescuers, police officers, doctors and volunteers working nonstop, the official added.