Turkey's Foreign Minister Mevlüt Çavuşoğlu met with US Secretary of State Antony Blinken on Wednesday, where they "conducted an extensive dialogue on a broad range of areas of bilateral cooperation and emphasized the significance of our partnership as NATO Allies," according to a joint statement released Wednesday by the governments of the Republic of Türkiye and the United States.

"Minister Çavuşoğlu and Secretary Blinken underlined their unequivocal support for Ukraine’s sovereignty and territorial integrity against Russia’s unacceptable war and reaffirmed their support to find a solution to end the war," the joint statement read.

The two discussed methods to strengthen NATO "coordination and solidarity in the face of current threats and challenges," the statement read. Topics of discussion also included NATO's open-door policy as well as letting Finland and Sweden join NATO. Turkey has been the only member that has voiced opposition to their membership, on the grounds of terror concerns.

The United States is set to finalize a huge military aid package for Ukraine totaling approximately $2.5 billion worth of weaponry, including — for the first time — Stryker combat vehicles, two sources briefed on the next tranche of aid told CNN. The package is not yet finalized, one of the sources said, but could come before the end of the week.

The new package is one of the largest to be announced since the war started last February, according to one source. It would include more armored Bradley Fighting Vehicles that, combined with the Strykers, is a significant escalation in the armored vehicles the US has committed to Ukraine for its fight against Russia. Mine-resistant ambush protected vehicles, known as MRAPs, are also on the list, the source said.

The announcement is not expected to include tanks or the long-range missiles that has been repeatedly asked for by Ukraine. The US is expected to send Ukraine more ammunition for its artillery systems and HIMARS rocket systems that have been consistent in recent aid packages.

Ukrainian officials have been fiercely lobbying Washington for longer-range missiles known as Army Tactical Missile Systems (ATACMS), which have a range of around 200 miles (300 kilometers). The Biden administration has resisted sending them out of fear of escalating the conflict with Russia. The administration has also pushed back on sending M1 Abrams tanks because of logistical and maintenance complications.

Funds for energy support: The Biden administration also intends to provide $125 million in additional energy support for Ukraine, according to the US Agency for International Development. The funding, which will be drawn from the 2023 Additional Ukraine Supplemental Appropriations Act passed in December, builds on existing contributions to assist Ukraine in the face of attacks from Russia.

The briefing, held Tuesday in Kyiv, experienced technical glitches not long after it began, but eventually proceeded. The incident is an example of how control of the information space has been a key aspect of the nearly yearlong full-scale Russian war in Ukraine.

Ukrainian officials said they thwarted the hack, “no matter how many attempts you make to muffle the voice of the Ukrainian media space,” Ukraine’s state news agency declared on its Telegram channel.

A notorious hacking group known as Sandworm, which the US Justice Department has linked to Russia’s military intelligence directorate, was likely responsible, according to a statement from the Ukrainian agency, the State Service of Special Communications and Information Protection (SSSCIP). Sandworm caused power outages in Ukraine in 2015 and 2016, according to cybersecurity researchers, and tried to do so again in April 2022, two months into Russia’s full-scale invasion of Ukraine.

Russian operatives have continued to pummel Ukrainian organizations with a variety of hacks in the months since, according to analysts, from hacks that wipe data from a network to those that knock communications offline. But US officials have credited Ukraine for becoming more resilient to digital disruptions than in years past.

Russian hacking during the war has been "designed to increase the chaos of a conventional invasion, reduce the country's governability, and damage critical infrastructure,” SSSCIP said in a report this week.

Ukrainian President Volodymyr Zelensky gave more details Wednesday about rescue operations at the site of the Brovary helicopter crash, in which kindergarten teachers and local residents assisted in evacuations and helped the wounded.

The rescue operation lasted more than nine hours, and a criminal investigation into the incident is being conducted by the Security Service of Ukraine, Zelensky said in his nightly video address.

"Hundreds of people were involved in extinguishing the fire, searching and rescuing the injured and carrying out the initial investigative actions — our rescuers, police officers, National Guard soldiers, doctors, psychologists, employees of the Security Service of Ukraine," Zelensky said. "I thank everyone involved in this rescue operation today."

"I would like to thank the educators of the kindergarten on the territory of which the helicopter crashed," Zelensky added. "Thank you for your bold actions, for taking the children out."

"I would also like to thank the ordinary residents of Brovary, in particular Mrs. Diana, Mrs. Nadia and others who helped both the children and the wounded," the president said.

"My condolences to all those who lost their loved ones!"

"We have lost people who were professionals, patriots and reliable managers. Minister Denys Monastyrskyi, Yevhen Yenin, and their colleagues who died in the crash are not people who can be easily replaced," Zelensky said of the Ministry of Internal Affairs officials who lost their lives in the crash. "It is a truly great loss for the state. My condolences to the families."

Anton Gerashchenko, Ukraine's current advisor and former deputy minister of Internal Affairs, spoke to CNN's Isa Soares about the fatal crash and said: "Ukraine lost the whole generation of young politicians... it's a huge grief for everyone."

"We didn't have that protocol in place," Gerashchenko said of an entire delegation traveling together. "I think this bloody lesson will be a clear example for us that such high politicians and ministers cannot travel altogether. But this tragedy brought the death of children, which is amazingly horrible and obviously everyone who died, every life of every Ukrainian is priceless."

A helicopter crash in a Kyiv suburb Wednesday killed 14 people, including one child, according to Ukrainian President Volodymyr Zelensky.

The crash occurred near a kindergarten in Brovary and killed the leadership team of Ukraine’s interior ministry, including Interior Minister Denis Monastyrsky. 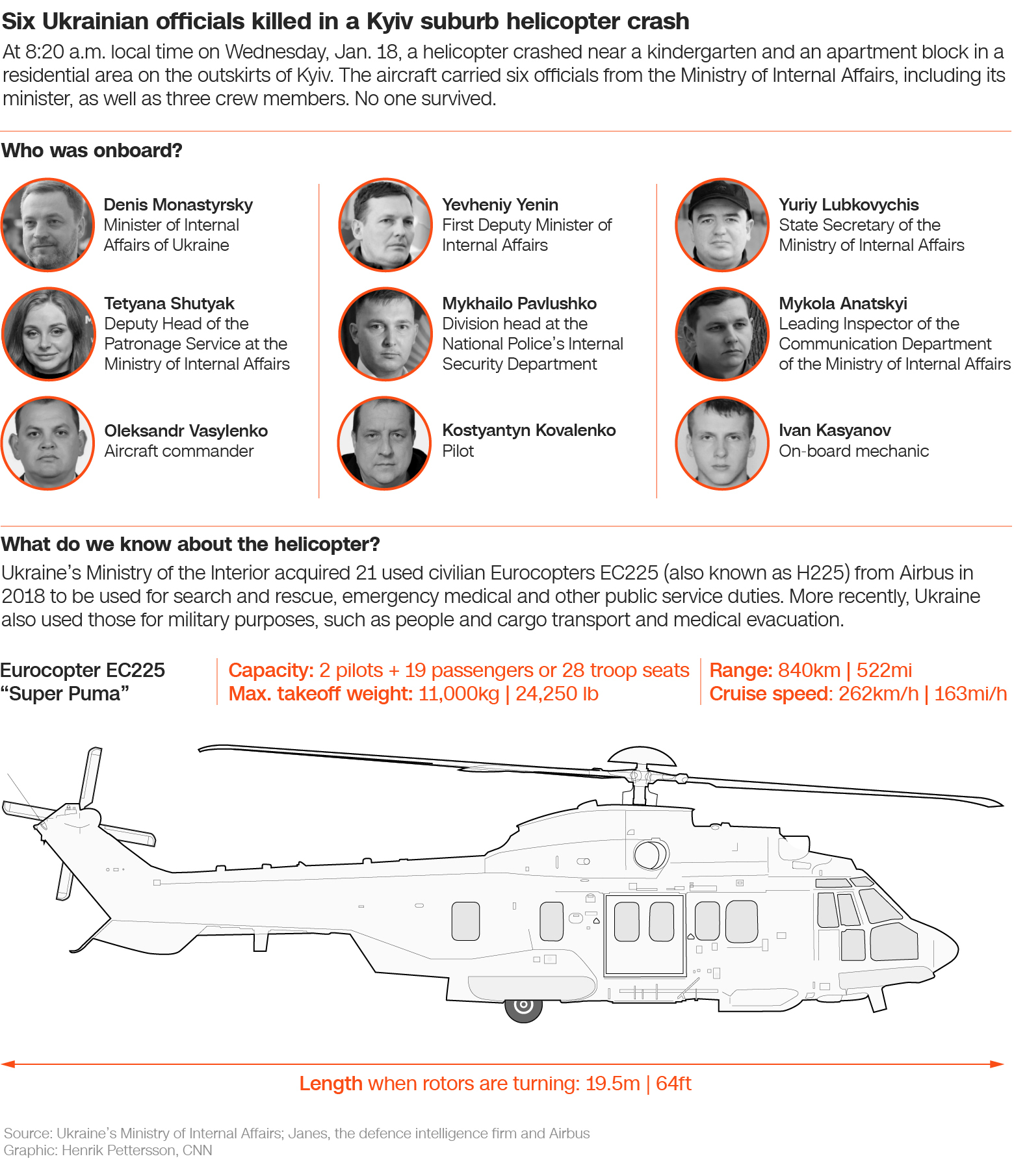 The rescue operation lasted more than nine hours, and a criminal investigation into the incident is being conducted by the Security Service of Ukraine, Zelensky said in his nightly video address.

US President Joe Biden and Secretary of State Antony Blinken expressed their condolences following the deadly helicopter crash, while NATO Secretary General Jens Stoltenberg called it a “new tragedy” for a country that has already suffered during the war.

The UN nuclear watchdog finalized the deployment of permanent missions to Ukrainian power plants — including the plants in Rivne, Chornobyl, and south Ukraine, according to the Ukrainian prime minister following his meeting with the head of the International Atomic Energy Agency on Wednesday.

The IAEA mission at Khmelnytsky nuclear power plant will also be functioning soon, Prime Minister Denys Shmyhal said at a press conference, with all the missions' work continuing during wartime and afterward to restore any damage.

Following the meeting, Shmyhal said, "For the first time in the history of mankind, nuclear facilities have become an element of an offensive military strategy," adding that Grossi pledged the IAEA's full support in "our efforts to ensure nuclear safety," including at the Zaporizhzhia nuclear power plant.

Remember: Zaporizhzhia, with six reactors, is the largest nuclear power station in Europe. The area, and the nuclear complex, has been under Russian control since the beginning of the war. Grossi and other nuclear experts have been concerned about the threat of a nuclear accident amid shelling around the plant.

Shmyhal said Ukraine has asked that the control of the Zaporizhzhia facility be returned to Ukrainian authorities and that there is a "complete withdrawal" of Russian troops and Rosatom personnel from the plant. Grossi assured Ukraine that the IAEA would never recognize Russia as the owner of the Zaporizhzhia nuclear power plant., according to Shmyhal.

The prime minister added that Ukraine will "continue to insist on limiting Russia's rights and privileges in the IAEA and terminating cooperation with Russia in the nuclear sphere."

Blinken noted that the crash “took the lives of senior officials in the government of Ukraine, including the Minister of Interior, the Deputy Minister, colleagues with whom we’ve worked very, very closely.”

“A couple of them left behind small children. They have been heroic in their efforts in defense of Ukraine against the Russian aggression and we stand with our friends in Ukraine in mourning their loss and recommitting to the efforts that we’re making to help Ukraine defend itself against this aggression,” Blinken said at the State Department Wednesday.

NATO Secretary General Jens Stoltenberg on Wednesday expressed his confidence that Turkey would finalize the process for Nordic countries Finland and Sweden to join the US-led military alliance.

“I'm confident that Turkey will finalize the accession process for Finland and Sweden,” Stoltenberg said at a World Economic Forum panel in Davos, Switzerland, adding he did not know when this would be.

This would be the “fastest accession process in NATO’s modern history,” he noted. “Normally, accession to NATO takes years. It’s less than a year since Finland and Sweden applied.”

Remember: NATO decisions are made by consensus, which means all 30 alliance member states must approve the two nations joining. Turkey is the only member that has voiced opposition to their membership, on the grounds of terror concerns.

Meanwhile, Ukrainian President Volodymyr Zelensky in video remarks to the forum Wednesday again reiterated his desire for Ukraine to join NATO, saying that the alliance "is the best security guarantee for us, for our country, for our kids."