US and Western officials are urging Ukraine to shift its focus from the brutal, months-long fight in the eastern city of Bakhmut and prioritize instead a potential offensive in the south, using a different style of fighting that takes advantage of the billions of dollars in new military hardware recently committed by Western allies, US and Ukrainian officials tell CNN.

For nearly six months, Ukrainian forces have been going toe-to-toe with the Russians over roughly 36 miles of territory in Bakhmut, which lies between the separatist-held cities of Donetsk and Luhansk. Heavy shelling has left the city almost completely destroyed.

“It is a brutal and grinding fight,” a senior Western intelligence official said last week, with each side exchanging anywhere from 100-400 meters of land per day and exchanging several thousands of artillery rounds almost daily.

[Bakhmut] is less attractive militarily, in terms of any sort of infrastructure, than it might have been if it had not been this destroyed.”

Now, ahead of what is widely expected to be a brutal spring of fighting, there is a tactical opening, US and Western officials say. In recent weeks they have begun suggesting that Ukrainian forces cut their losses in Bakhmut, which they argue has little strategic significance for Ukraine, and focus instead on planning an offensive in the south.

That was part of a message delivered by three top Biden officials who traveled to Kyiv last week. 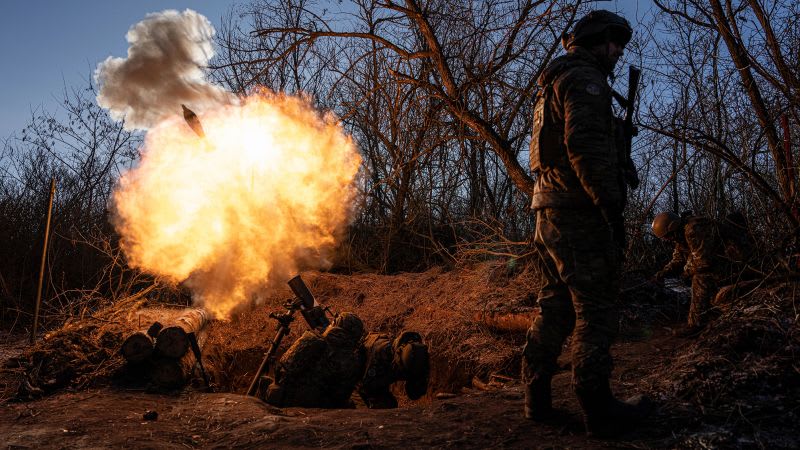 The German government has received a Polish request to export German-made Leopard 2 battle tanks to Ukraine, a spokesman told CNN.

He would not say how quickly a possible approval could happen, but said the process would take place with “necessary urgency.”

“The Federal Government has received an application from Poland for the export of Leopard 2 tanks," the spokesman confirmed.

"As already explained by government spokesman Steffen Hebestreit at yesterday's government press conference, applications for the approval of an arms export are examined with the necessary urgency in accordance with the established procedures and arms export guidelines,” he added.

Two more deputy ministers have been dismissed from the Ukrainian government as part of the “personnel” changes announced by President Volodymyr Zelensky last night.

The dismissals follow that of Vasyl Lozynskyy, the acting minister of Communities and Territories Development.

Ukraine's Infrastructure Ministry said on Sunday that Lozynskyy had been arrested on suspicion of embezzlement. He has not commented on the allegations.

In a Facebook post published on Monday, Lozynsky’s lawyer, Oleksandr Tananakin, said his client had been dismissed “before he was notified of suspicion.”

“No funds, let alone in the amounts indicated by the NABU [National Anti-Corruption Bureau, which had accused him of receiving “unlawful benefits”], were found and seized from Mr. Lozynsky,” he said.

Tananakin accused the bureau of “deliberately using manipulative tactics to inform the public in order to artificially create a representation of Lozynsky's guilt and form a negative image of him.”

In a post on his Facebook page, Nehoda said that he was “automatically subject to dismissal” because “in December, the Government decided to liquidate the Ministry of Regional Development.” He said that only two deputies were offered jobs with the minister and that all others automatically lost their jobs. “I didn't write any letter of resignation, it's not necessary at all,” he said.

In addition, the cabinet supported the dismissal of the governors of the Dnipropetrovsk, Zaporizhzhia, Kyiv, Sumy and Kherson regions, Nemchinov said.

On Monday night, Ukrainian President Volodymyr Zelensky had signaled that there would be changes to “personnel” within the Ukrainian government, without naming the people impacted.

The Kremlin is not currently talking about the possibility of restricting citizens’ travel outside of Russia, spokesperson Dmitry Peskov said Tuesday.

“No (such plans) are not being discussed in the Kremlin,” Peskov told reporters.

Earlier Tuesday, state news agencies reported that Russian lawmakers have drafted a bill requiring citizens to register online to book a specific date and time for crossing the Russian border.

The proposed amendments will only affect freight transport, said Yevgeny Moskvichev, head of the State Duma Transport Committee, according to RIA Novosti.

The draft bill was posted online on Monday but had been taken down as of Tuesday morning, according to RIA Novosti.

The Kremlin and other Russian officials have repeatedly denied widespread speculation that Moscow is planning to close country's borders in January, and possibly announce a second wave of mobilization.

Berlin's approval of Leopard 2 tank deliveries to Ukraine would inevitably affect relations between Russia and Germany, which are already at a “fairly low point,” Kremlin spokesman Dmitry Peskov said Tuesday.

Peskov said that there is currently “no substantive dialogue with Germany or with other EU and NATO countries.”

“Of course, such deliveries do not bode well for the future of relations. They will leave an imminent trace,” Peskov added during a regular press briefing.

Peskov was speaking before Poland formally asked for approval from Germany to transfer some of its German-made Leopard 2 tanks to Ukraine on Tuesday.

Recent changes to “personnel” within Ukraine's government prove that President Volodymyr Zelensky “sees and hears society," according to a presidential adviser.

“Zelensky’s personnel decisions testify to the key priorities of the state... No ‘blind eyes’,” tweeted Mykhailo Podolyak, an adviser to the Head of the Office of President of Ukraine.

“During the war, everyone should understand their responsibility. The President sees and hears society. And he directly responds to a key public demand – justice for all…”

Earlier Tuesday, it was announced that Ukraine’s deputy defense minister, a deputy prosecutor general, and Zelensky’s deputy chief of staff had tendered their resignations and been dismissed.

“We are preparing our decision and it will come very soon,“ Pistorius said during a joint press conference with NATO Secretary General Jens Stoltenberg on Tuesday.

If the decision is taken to send the tanks, Germany will be able to “act very soon,” added Pistorius.

He defended Germany from criticism for holding off on sending the tanks, saying they are not the only ones weighing up the decision.

There are some partners who are still evaluating, this is a process,” he explained.

Germany would not stand in the way if other nations started training Ukrainian soldiers on Leopard tanks, he added.

“We don't stand in the way of starting the training right away, but we can't do that until we've made a decision about how to handle the Leopard delivery,” Pistorius said.

Russian lawmakers have drafted a bill requiring citizens to register online to book a specific date and time for crossing the country's borders, state news agency TASS reported Tuesday, citing an official document at their disposal.

The amendments to the transport law were prepared by Yevgeny Moskvichev, head of the State Duma Committee on Transport and Infrastructure Development, according to TASS.

“The passage of vehicles belonging to Russian carriers, foreign carriers, citizens of Russia, foreign citizens, stateless persons, and others on sections of highways in order to cross the state border of the Russian Federation is carried out on a reserved date and time in accordance with the procedure established by the government of the Russian Federation," reads the draft of the bill, reports TASS.

The amendments also introduce new measures of controlling the arrival of vehicles on the reserved date and time, and equipping checkpoints with means that would allow the forced stopping of vehicles, according to state news agency RIA Novosti.

In September, the announcement of a "partial mobilization" sparked an exodus from Russia as military-age men fled the country rather than risk being conscripted, with video footage showing long lines of traffic at land border crossings into several neighboring countries, as well as surging airfares and sold-out flights.

The Germans have already received our request for consent to the transfer of Leopard 2 tanks to Ukraine,” he said on Twitter.

“I also appeal to the German side to join the coalition of countries supporting Ukraine with Leopard 2 tanks. This is our common cause, because it is about the security of the whole of Europe!” he urged.

CNN has asked Germany for confirmation.