Our live coverage of the war in Ukraine has ended for the day. Read about the latest here or in the posts below.

A Russian Orthodox cathedral on New York City's Upper East Side appears to have been defaced with red paint on Friday night, the same day that the Russian Consulate building about six blocks away was graffitied with red spray paint.

The act of vandalism was confirmed to CNN by Abbot Nicodemus, a cathedral spokesperson.

Remnants of the paint could be seen Saturday morning after the eyewitness observed a woman working to scrub it away.

“We sincerely do not understand those individuals that allow themselves acts of vandalism in relation to our cathedral. We pray for them,” Nicodemus said in a statement to CNN. “We want them to realize that the Russian Orthodox Church in the USA carries out important spiritual and peacemaking activities here, and we are open to all people, regardless of their nationality and political beliefs.”

The NYPD said it was not aware of or investigating this incident.

Police previously told CNN they were investigating the red graffiti on the Russian Consulate building as a “possible bias incident.” There were no updates in that investigation.

It is the third case of vandalism since the beginning of the year where the cathedral has been covered with paint or written with "insulting" inscriptions, Nicodemus said.

In addition, "insulting" calls and emails have been received by the cathedral as well, he said. Some have included direct threats against the clergy and parishioners.

Saint Nicholas Cathedral is "compelled to turn such messages to the police," said Nicodemus. "We are grateful to the law enforcement agencies of New York for their prompt response to our messages and their constant support."

Half of parishioners at the church are Ukrainians, and it continues to be their main house of prayer, he added.

The church said that since February, their parishioners have been actively involved in collecting financial and humanitarian assistance for the victims of the war in Ukraine.

Rafael Mariano Grossi, director general of the International Atomic Energy Agency, is expected to travel to Kyiv and Moscow next week, according to a press statement by the IAEA released Saturday.

The visit is part of ongoing efforts around "implementing a nuclear safety and security zone around the ZNPP (Zaporizhzhia nuclear power plant) as soon as possible," according to the statement.

“Such a detention of any member of the plant staff would be a source of grave concern in itself, but also for its psychological impact and pressure on the rest of the staff - which is detrimental to nuclear safety and security," Grossi said.

In his nightly address on Saturday, Ukraine’s President Volodymyr Zelensky confirmed the retreat of Russian forces from the strategic Donetsk city of Lyman.

"The Ukrainian flag is already in Lyman, Donetsk region. Fighting is still going on there. But there is no trace of any ‘pseudo-referendum’ there,” Zelensky said.

Zelensky also emphasized that “even more voices in the world have joined in condemning the pseudo-referendums and Russia's attempt to annex the territory of Ukraine.”

Zelensky said he unequivocally agreed with Guterres that “Russia violates the goals and principles of the UN, the UN Charter and that “pseudo-referendums” and attempted annexation will not have any legal force.”

“When such words are heard at the highest level in the UN, everyone in the world understands everything,” Zelensky added. “And there is no such veto right in Russia that can stop or cancel this understanding of the world.”

“The world will not allow the times of colonial conquests, criminal annexations and total arbitrariness to return instead of international law,” Zelensky concluded.

As Russia’s army faces the latest in a string of military defeats in Ukraine, pressure appears to be growing on Russian President Vladimir Putin to use nuclear weapons on the battlefield.

Ramzan Kadyrov, the leader of the Chechen republic, said that Putin could use "low-yield" nuclear weapons on the battlefield.

In a statement slamming Russian generals in the wake of Russia’s withdrawal of its forces from the strategic town of Lyman, Kadyrov said it was time for the Kremlin to make use of every weapon at its disposal.

“I do not know what the Defense Ministry reports to the Supreme Commander-in-Chief, but in my personal opinion we need to take more drastic measures, including declaring martial law in the border territories and using low-yield nuclear weapons. There is no need to make every decision with the Western American community in mind,” Kadyrov said on his Telegram channel.

Earlier last week, Dmitry Medvedev, who served as Russia’s president between 2008 and 2012, also discussed nuclear weapons use on his Telegram channel, saying it was permitted if the existence of the Russian state was threatened by an attack even by conventional forces.

“If the threat to Russia exceeds our established threat limit, we will have to respond … this is certainly not a bluff,” he wrote.

Some context: Concerns have risen sharply that Moscow could resort to nuclear weapons use after Putin’s proclamation of the annexation of parts of eastern and southern Ukraine. The announcement Friday was dismissed as illegal by the United States and many other countries, but the fear is the Kremlin might argue that attacks on those territories now constitute attacks on Russia.

In his speech at the Kremlin, the Russian leader made only passing reference to nuclear weapons, noting the United States was the only country to have used them on the battlefield.

“By the way, they created a precedent,” he added.

As Sunday nears in Ukraine, these are the latest developments.

Russia withdraws from Lyman: Russian forces retreated from Lyman, a strategic city in Donetsk for its operations in the east, the Russian defense ministry said Saturday, just a day after Moscow’s annexation of four regions — including Donetsk — that’s been declared illegal by the West.

The retreat marks Ukraine’s most significant gain since its successful counteroffensive in the northeastern Kharkiv region last month.

10 children killed in car convoy strike: The bodies of 22 civilians, including 10 children, were found following Russian shelling on a convoy of cars near the town of Kupiansk in eastern Ukraine, the Kharkiv regional prosecutor’s office said Saturday.

The Security Service of Ukraine (SBU) said on Telegram it would be investigating the “war crime.”

Zaporizhzhia plant director detained: The director general of Ukraine’s Zaporizhzhia nuclear power plant has been detained by a Russian patrol, the president of state nuclear company Energoatom, Petro Kotin, said in a statement on Saturday.

Director General Ihor Murashov was in his vehicle on his way from the plant when he was “stopped, he was taken out of the car, and with his eyes blindfolded he was driven in an unknown direction.

Kotin and Ukraine’s Ministry of Foreign Affairs called on Russia to release him. 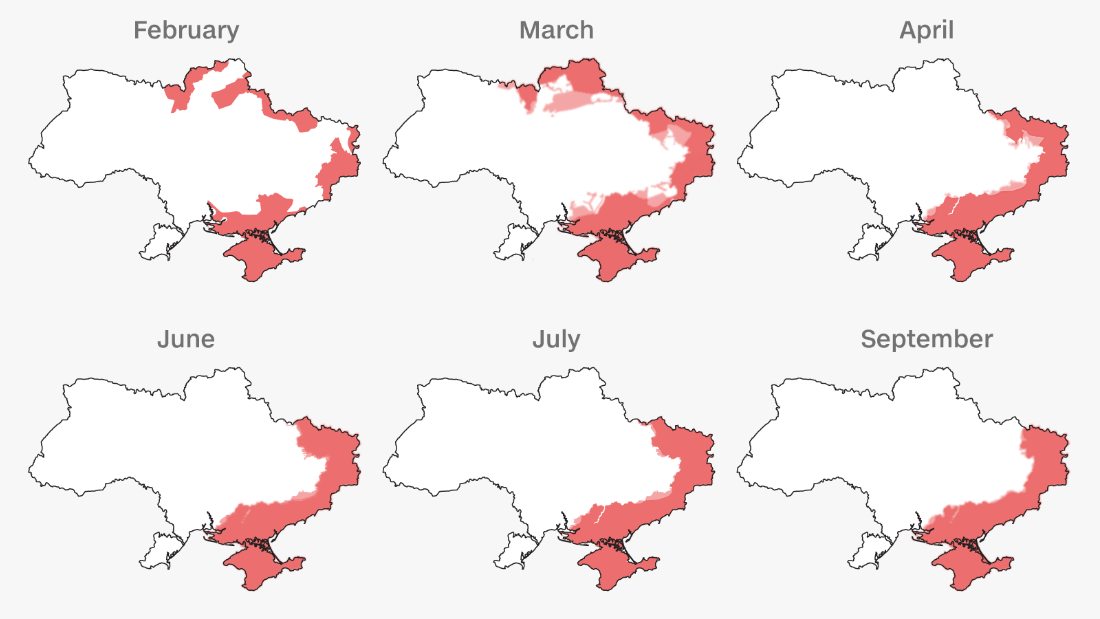 The Ukrainian military’s sudden and successful counter-attack in the Kharkiv region this month has left Russian forces controlling less Ukrainian land than they did after their first thrust into the country in February 2022, according to a CNN analysis of exclusive data from the Institute for the Study of War.

Russia’s first massive push, which began on the night of Feb. 23, allowed it to secure or advance on one-fifth of Ukrainian territory, or about 119,000 square kilometers (46,000 square miles) of the total 603,500 square kilometers Ukraine claims and considers “temporarily occupied,” the analysis shows.

Seven months after launching an invasion — one that Western officials thought would be over in days with an overrun Ukrainian capital — Russia controls roughly 3,000 square kilometers (about 1,158 square miles) less land than it did in the first five days of the war, CNN found. (Unverified claims are excluded from the analysis.)

In a move to secure what it still controls, the Kremlin on Friday claimed to annex four Ukrainian regions, of which it has only partial control, adding to the seizure and annexure of the region of Crimea in 2014.

See how the advances stalled in this CNN interactive.

Russian troops have withdrawn from the town of Lyman in eastern Ukraine to avoid being surrounded by Ukraine's army, the Russian Ministry of Defense said Saturday.

"In connection with the creation of a threat of encirclement, allied troops were withdrawn from the settlement of Krasny Liman to more advantageous lines," the defense ministry said on social media platform Telegram.

The Russian name for the town of Lyman is Krasny Liman.

Russia state media reported that the reason for the withdrawal was due to Western-made artillery and intelligence.

Russia-24 reporter Yevgeny Poddubny acknowledged the withdrawal and claimed the reason for it was that "the enemy used both Western-made artillery and intelligence from North Atlantic alliance countries."

The bodies of 22 civilians, including 10 children, were found following Russian shelling on a convoy of cars near the town of Kupiansk in eastern Ukraine, the Kharkiv regional prosecutor's office said Saturday.

"According to the data of investigators, the cars were shot by the Russian army on September 25, when civilians were trying to evacuate. Two cars burned completely. According to preliminary information, 22 people died, including 10 children. The investigation of the scene is ongoing," the office said on the social media platform Telegram.

"A pre-trial investigation was started," the statement continued, adding that on Friday prosecutors of the Security Service of Ukraine (SBU) "and the police discovered a convoy of seven cars that had been shot dead near the village of Kurylivka, Kupiansk district."

The SBU confirmed on Telegram they would be investigating a "war crime" of a "civilian convoy in the so-called ‘grey zone’ between occupied Svatove in Luhansk region and liberated Kupiansk in Kharkiv region" where it said at least 20 people died, including 10 children, in "a brutal attack."

CNN could not independently verify the allegations.

There has been no official Russian response to the claims made by the Kharkiv Regional Prosecutor's Office and SBU.