After regaining the key eastern Ukrainian city of Lyman over the weekend, Ukrainian forces have continued their counteroffensive and pushed into the Luhansk region, according to pro-Russian officials and propagandists.

“The Armed Forces of Ukraine managed to cross the administrative border of the LPR and gain a foothold in the direction of the settlement of Lysychansk,” Andrey Marochko, a military leader in the self-proclaimed Luhansk People’s Republic (LPR), said on Telegram on Monday.

Russia controls nearly all of Ukraine’s Luhansk region; Ukrainian forces liberated the Luhansk village of Bilohorivka at the end of September.

Ukrainian forces have continued their offensive towards the Russian-occupied towns of Svatove and Kreminna, in the Luhansk region, a pro-Russian journalist, military blogger and analyst said.

“In the face of the threat to our grouping in the area of ​​the settlement of Borova, it was decided to withdraw it to the line of the Zherebets River, which was done tonight,” Yuriy Podolyaka wrote on Telegram.

“In the area of ​​Kreminna, the enemy is also not particularly active today, but the concentration of troops suggests that a new offensive in this direction (towards Svatove and Kreminna) should begin any day,” he said.

Kyiv is now advancing into the Luhansk region, according to military representative for the so-called People's Militia of the Luhansk People's Republic.

"Now the Ukrainian media have begun to very actively share information that the Armed Forces of Ukraine have crossed the administrative border of the LPR, and they are rejoicing,” Andrey Marochko said, quoted by the Luhansk Media Center.

“But in fact, there are no administrative borders for the military now, in fact, Ukrainian troops entered ‘the fire bag’ and are being actively destroyed by our troops," Marochko added.

Russian troops in eastern Ukraine withdrew from the city of Lyman after facing a lack of manpower, poor communications and “mistakes” by commanding officers, according to a revealing report in a Russian pro-government tabloid.

“The risk of being encircled and the prospects of the humiliating captivity were too big, and the commanders made a decision to retreat,” the writer, who was embedded with Russian troops, wrote in Komsomolskaya Pravda.

The author of the newspaper report said the Russian troops had described “all the usual stuff.”

“No decent communication between different units. Nobody knows what is happening at the neighboring positions. When you ask for the artillery support through a convoluted system of reports, it takes time and our targets are long gone.”

The reason for the Russians’ retreat, too, was “typical,” the report said.

“Not enough soldiers, mistakes of the commanders when organizing the defense,” according to the tabloid account.

“The so-called ‘500’s’ – the contract soldiers who refuse to fight and leave the battlefield. Late arrival of the reserves played its role too as well as lack of coordination between units on the ground and lack of modern equipment when it comes to intelligence.”

Ryabokon, the charge d’affaires at the Russian embassy in Vilnius, has been given “five days to leave the country,” according to a press release published by the foreign ministry on Monday.

Its reasoning was based on “recent actions and statements by Ryabokon” which “were incompatible with his diplomatic status,” and “regarded as an interference in the host state's internal affairs and, therefore, violated the Vienna Convention on Diplomatic Relations.”

“Lithuania's Foreign Ministry also strongly protested against the Russian President's decision of 30 September to illegally annex the Ukrainian regions of Donetsk, Luhansk, Kherson, and Zaporizhzhia, parts of which were temporarily occupied by Russia,” the statement concluded.

Lithuania has emerged a staunch ally of Kyiv since Russia invaded Ukraine in February. Last week, the Lithuanian president alongside the leaders of eight other NATO countries issued a joint statement supporting Ukraine's bid for membership of the defense alliance. They also called for increased military aid to Ukraine.

Moscow will “continue consulting” with the residents of the Zaporizhzhia and Kherson regions to establish the exact borders of the Ukrainian regions claimed to be annexed by Russia.

“As for the Kherson and Zaporizhzhia (regions), we will continue consulting with the population of these regions," Putin's spokesman Dmitry Peskov said on Monday, when asked to clarify the borders of the territories annexed by the Russian Federation.

In response to questions about what format these consultations will take place, Peskov said he “cannot answer this question at the moment,” but added it will depend on the will of the people living on those territories. He said that no new referendums are planned.

Last week, Russian President Vladimir Putin formally signed a decree to annex nearly a fifth of Ukraine's territory in blatant violation of international law, following so-called referendums held by Russian-backed officials in eastern and southern Ukraine on joining Russia. The votes are illegal under international law and have been dismissed by Ukraine and Western nations as "a sham."

Part of the territory of the Kherson and Zaporizhzhia regions is currently under control of the Ukrainian military. Peskov declined a comment on whether Russia will consider this as its own land following the ceremony at the Kremlin's St. George's Hall on Friday.

Talking about the other two regions, Peskov reaffirmed that Russia recognized as part of its territory the entirety of the self-proclaimed Donetsk People's Republic (DPR) and Luhansk People’s Republic (LPR), within their borders of 2014.

On Sunday, the Constitutional Court of Russia recognized the treaties on the admission of the Zaporizhzhia and Kherson regions, the DPR and the LPR to the Russian Federation as legal. The treaties published by the government do not specify the exact borders of the new territories.

Kyiv has recaptured more territory in the eastern Donetsk region, shortly after liberating the key city of Lyman.

Russian forces are pursuing young men of conscription age in occupied areas of Ukraine, according to Ukrainian officials.

Russian forces are carrying out “door-to-door” checks in occupied areas of Ukraine, looking for young men of conscription age, the Ukrainian military said on Monday.

“In the temporarily occupied territories, mobilization measures continue, during which the occupying forces carry out door-to-door and make lists of men of conscription age,” Ukraine’s Operational Command South said in a statement.

Russian forces have also stepped up document checks at checkpoints, making it "as difficult as possible," to leave the occupied areas, the statement added

Ukrainian officials have been warning for some time that Russia planned on using its claimed annexations as a pretext to draft Ukrainians in occupied areas to use as “cannon fodder.”

The Ukrainian military’s sudden and successful counter-attack in the Kharkiv region this month has left Russian forces controlling less Ukrainian land than they did after their first thrust into the country in February, 2022, according to a CNN analysis of exclusive data from the Institute for the Study of War (ISW).

Russia’s first massive push, which began on the night of Feb. 23, allowed it to secure or advance on one fifth of Ukrainian territory, or about 119,000 square kilometers (46,000 square miles) of the total 603,500 square kilometers Ukraine claims and considers “temporarily occupied,” the analysis shows.

Seven months after launching an invasion — one that Western officials thought would be over in days with an overrun Ukrainian capital — Russia controls roughly 3,000 square kilometers less land than it did in the first five days of the war, CNN found. (Unverified claims are excluded from the analysis.) 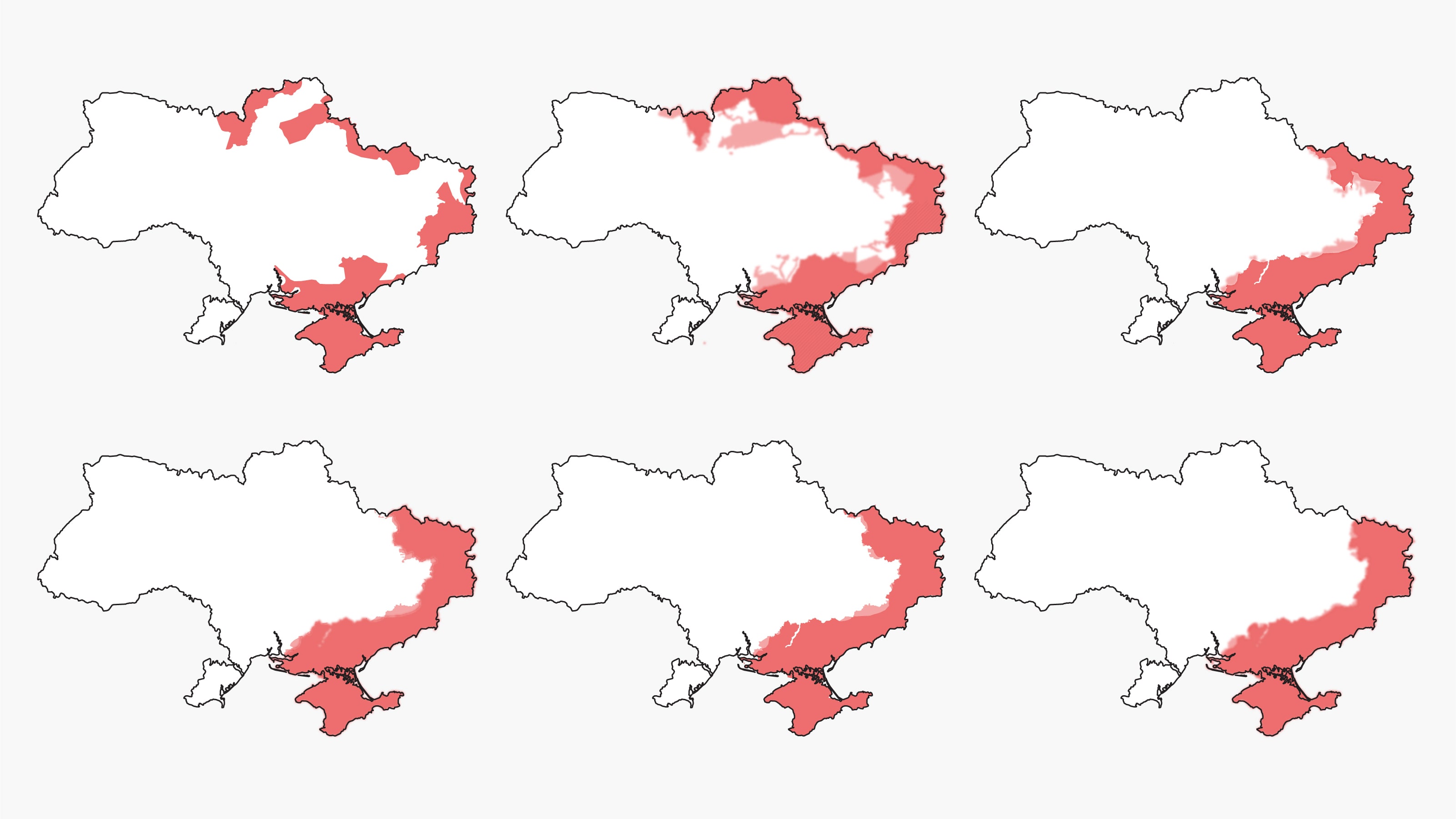 The turning points in Russia's invasion of Ukraine

Ukrainian forces liberated the village of Torske near Lyman in the Donetsk region on Sunday, as they inch closer to taking back the Luhansk region, according to the Ukrainian military.

Serhiy Cherevaty, spokesman for the Eastern Group of the Armed Forces of Ukraine, said on national television that Ukrainian forces are hitting Russian military units in Luhansk’s city of Kreminna “with fire.”

"For them (Russian occupiers), it is now very important to keep Kreminna. After overcoming Kreminna, the Armed Forces of Ukraine will go to Svatovo, Rubizhne, and further on they will be able to liberate the Luhansk region,” Cherevaty said, adding they would also be able to take back Severodonetsk and Lysychansk should they win back control of Kreminna.

Zelensky hails advances: Ukraine's latest gains come after the key Donetsk city of Lyman was liberated by Ukrainian forces at the weekend.

However, Ukrainian President Volodymyr Zelensky said Sunday that Ukraine's military successes were not limited to Lyman. In his nightly address to the nation, Zelensky said a substantial part of the war reports he receives are taken up with a growing list of recently liberated Ukrainian settlements.

“At least twice a day — in the morning and in the evening — I receive reports from our military. This week, the largest part of the reports is the list of settlements liberated from the enemy as part of our defense operation," Zelensky said. “The story of the liberation of Lyman in Donetsk region has now become the most popular in the media. But the successes of our soldiers are not limited to Lyman.”

Zelensky also praised the liberation of Arkhanhelske and Myroliubivka settlements in Kherson region by soldiers of Ukraine's 129th brigade.

The ghostly emptiness of the streets of Lyman in eastern Ukraine belies this city’s strategic significance.

There are no signs of Russian troops at all on Sunday — few damaged Russian tanks, or Russian dead, or Russian prisoners. Members of the Ukrainian National Guard from the Dnipro-1 unit hover in small numbers on some streets.

The occasional rattle of gunfire, or thud of artillery, pierces the silence. A few locals emerge, riding bicycles, searching for food, bewildered about what is happening.

“One day I wear one cap, another day a different cap,” said one woman in tears, pretending to take off a hat.

“How can we live like this,” she said, referring to the changing control of the city.

Ukrainian officials and troops had spoken repeatedly of large numbers of Moscow’s better units being trapped there. Yet on Sunday there were few signs of encirclement to be seen.

Some officials said Russian corpses had already been cleared away and prisoners removed. But locals offered another explanation: that Russian forces had left the city on Friday in an orderly fashion.

“They got on their tanks, and drove out,” said Tanya, riding her bicycle back to the bomb shelter, where she still spends the nights with 15 others.