European leaders have criticized Russian missile attacks on residential buildings that have left scores of civilians dead and wounded in the southeastern Ukrainian city of Zaporizhzhia over the past week.

Top European Union diplomat Josep Borrell said: "The EU condemns Russia's relentless attacks against civilians all over Ukraine, with dozens of victims every week. All those responsible will be held to account."

The European Commissioner for Crisis Response Janez Lenarcic also reacted to the attacks, saying, "Civilians and civilian infrastructure must not be the target. Never. Nowhere."

Lithuania's Ministry of Foreign Affairs called the attacks on Zaporizhzhia a “New outburst of Russian evil - a terrible overnight attack by Russia on civilians in Zaporizhzhia."

"As Russia continues its terror, we must continue providing support to Ukraine to be able to defend itself. Russia must stop this war!” the ministry added.

The attacks have also been condemned by the foreign ministries of Belgium, Romania, Croatia and North Macedonia.

"This is another vicious and inhumane attack against civilians, in violation of international humanitarian law. Those responsible must be held accountable," Romania's Foreign ministry tweeted.

Two explosions were heard in the center of the Ukrainian capital Kyiv on Monday morning, according to Mayor Vitali Klitschko.

“All services are on the location,” Klitschko wrote on Telegram.

Ukrainian officials reported casualties in the southeastern city of Zaporizhzhia early on Monday after a Russian missile strike destroyed an apartment block.

In a Telegram post, Oleksandr Starukh, head of the Zaporizhzhia regional military administration said: "Another multi-story residential building was destroyed as a result of a rocket attack in the center of Zaporizhzhia."

"There are some casualties," he added. "Rescuers, medics, and all corresponding services are working at the scene of the tragedy. All necessary assistance is being provided to the victims."

Some context: Dozens of people have been killed and wounded in Russian missile attacks on residential buildings in Zaporizhzhia over the past week. The city is not far from the front line, and the site of a nuclear power plant that the international community is watching warily.

Part of the wider region is occupied by Russian forces and last week Russian President Vladimir Putin signed measures to annex four areas of Ukraine, including Zaporizhzhia, in violation of international law.

Moscow denies that it has deliberately attacked civilians.

Russian President Vladimir Putin has signed a decree strengthening the defenses of the only bridge connecting annexed Crimea to the Russian mainland after a huge blast early Saturday severely damaged the structure.

Former Russian President Dmitry Medvedev said Russia will destroy the “terrorists” responsible for the attack on the Kerch bridge in Crimea on Saturday.

In an interview with Russian journalist Nadana Friedrichson Sunday, Medvedev said the hit on the crucial artery was a “terror attack” carried out by “the failed state of Ukraine.”

"Russia's response to this crime can only be the direct destruction of terrorists, just as other countries would react. This is exactly what the citizens of Russia are waiting for,” Medvedev said. "This is a terrorist act and sabotage committed by the criminal Kyiv regime. There was never any doubt about this. All reports and conclusions have been made."

Russian President Vladimir Putin will hold an operational meeting of his Security Council on Monday, following the blast on the bridge. Putin has also called the explosions a “terrorist attack” and said the organizers and executors were “Ukrainian special services.” While stopping short of claiming responsibility, high-ranking Ukrainian officials have publicly celebrated the explosion.

Russian missile strikes on Ukraine's southeastern city of Zaporizhzhia have killed at least 43 civilians in the past week, Ukrainian President Volodymyr Zelensky said in his nightly address on Sunday.

Zelensky added that the death toll from a Russian strike on apartment blocks in the city on Sunday had risen to 14.

"Unfortunately, this number may increase. Debris is still being cleared. More than 70 people were injured, including 11 children," Zelensky said. "It was a deliberate strike. The one who gave the order and those who carried it out knew what they were targeting."

Zelensky also cast doubt on Moscow's willingness to negotiate a peaceful settlement to the war, saying he sees "a constant terror against the civilian population." He also repeated calls for an "official designation of Russia as a terrorist state at all levels."

"When someone wants to negotiate, they don’t act this way," he said.

Some context: Russian forces have intensified missile attacks on residential buildings in Zaporizhzhia over the past week. The city is not far from the front line, and the site of a nuclear power plant that the international community is watching warily.

Part of the wider region is occupied by Russian forces and last week Russian President Vladimir Putin signed measures to annex four areas of Ukraine, including Zaporizhzhia, in violation of international law.

Moscow denies that it has deliberately attacked civilians.

Peskov was asked by RIA whether the attack on the bridge could trigger an activation of Russia's nuclear doctrine because it was "aimed at destroying critical civilian infrastructure of the Russian Federation."

“No. It’s a completely wrong formulation of the question,” Peskov replied to RIA.

Russian President Vladimir Putin on Sunday called the emergency on the Crimean bridge "a terrorist attack aimed at the destruction of the critical infrastructure of Russian Federation."

In 2020, Putin signed a decree updating Russia’s nuclear doctrine that allowed for the use of nuclear weapons if an attack was made on "critical state or military facilities," and it led to "the disruption of Russian nuclear forces," according to a copy of doctrine on the Kremlin's website.

Putin will hold an operational meeting of his Security Council on Monday, following the humiliating setback on the bridge.

Russian President Vladimir Putin will hold an operational meeting of his Security Council on Monday, just two days after a massive explosion on a key strategic bridge linking Crimea and Russia.

The meeting itself isn’t out of the ordinary — Putin regularly holds operational meetings with the Security Council, usually on a weekly basis, according to TASS. However, it comes just days after a major humiliation for the Russian President, when an explosion severely damaged parts of the road and rail bridge between annexed Crimea and the Russian Federation early Saturday.

And while the agenda has not been made public, the meeting comes at a strategic crossroads for the Kremlin, which must make a series of unenviable choices after Russia’s brutal invasion of Ukraine has faltered after a month of military setbacks.

Some road traffic and train traffic has resumed on the estimated $3.7 billion bridge. On Saturday, Russian Deputy Prime Minister Marat Khusnullin said repair works on the bridge would be carried out around the clock, with a damage survey to be completed within a day and divers scheduled to check all the supports of the bridge. 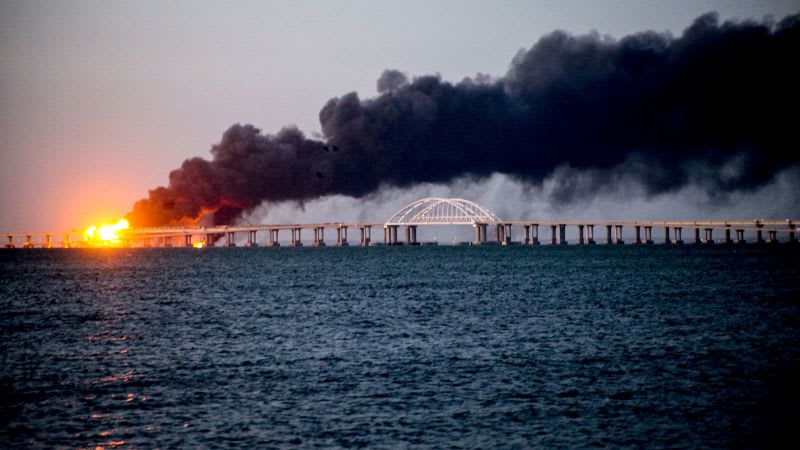 Crews restored power and cellular connection in Enerhodar, the city near the Zaporizhzhia nuclear power plant that is under Russian control, a senior official said Sunday.

“Water supply will be restored in the near future,” Vladimir Rogov, a pro-Russian leader in the regional Zaporizhzhia government, wrote in a Telegram post Sunday.

Rogov added that Ukrainians "have concentrated significant number of militants in Zaporizhzhia direction" and the risk of storming the Zaporizhzhia nuclear power plant "remains high".

Some context: Russian and Ukrainian officials blame each other for the recent shelling in Enerhodar.

Orlov said “the Ukrainian authorities have repeatedly tried to deliver humanitarian supplies with food, hygiene products and so on to the city,” adding that Ukraine is “ready to organize prompt delivery and distribution of drinking water in Enerhodar” but that Russian forces have not let humanitarian aid through.