A "kamikaze" drone attacked a community in Ukraine's Kyiv region on Thursday, according to Ukrainian military officials.

"One of the regional communities was attacked," the Kyiv regional military administration said in a Telegram post. "Initial reports indicate a kamikaze drone attack. Rescuers teams have responded."

Authorities urged people to stay in shelters "until the air raid siren stops," the administration said.

The administration did not say if there were any injuries or reports of damage from the attack, which follows three straight days of deadly Russian strikes on civilian targets across Ukraine, including the capital region.

New satellite images from Maxar Technologies taken Wednesday show cars crossing the Kerch bridge in Crimea just days after a deadly explosion damaged the only road and rail link between Russia and the Ukrainian peninsula annexed by Moscow in 2014.

The explosion Saturday, which killed at least three people, was a major blow to Moscow and the Kremlin has responded with deadly attacks against Ukraine's civil infrastructure over the past three days.

The images show limited car and rail traffic has restarted on the bridge following the blast as repairs are ongoing.

The photos also show long lines of cargo trucks waiting to be ferried to Crimea from Russia.

Though car traffic on the bridge has resumed, larger vehicles like trucks, vans and buses are now traveling by ferry across the Kerch Strait.

Russian authorities have detained eight people in connection with the attack on the bridge, state media reported Wednesday.

The Crimea bridge is a critical artery for supplying the peninsula with both its daily needs and supplies for the Russian military. Over the past few months, dozens of Russian military convoys have used the bridge, carrying vehicles, armor and fuel.

Kyiv has not claimed responsibility for the blast on the 19-kilometer (about 12-mile) long bridge, which was was opened by Russian President Vladimir Putin in 2018.

The UN General Assembly (UNGA) overwhelmingly approved a resolution on Wednesday telling Russia its annexation of four Ukrainian zones is illegal and not valid.

Ukrainian President Volodymyr Zelensky called the resolution "historic" in a tweet and thanked the states that voted in favor.

During the assembly's emergency special session on Ukraine, US ambassador to the UN Linda Thomas-Greenfield said the vote "is important not just to the future of Ukraine and the future of Europe, but to the very foundations of this institution."

"After all, the UN was built on an idea: that never again would one country be allowed to take another's territory by force," she said.

The US diplomat said the resolution calls for peace and de-escalation, and "makes clear that we reject Russia's attempted annexations. That we reject this affront to territorial integrity, to national sovereignty, to peace and security."

She noted that "today it is Russia invading Ukraine. But tomorrow it could be another nation whose territory is violated. You could be next. What would you expect from this chamber?"

Russian forces in occupied Ukraine continue to launch offensive operations amid the much higher tempo of missile attacks, according to the Ukrainian military.

In an update late Wednesday, the General Staff of the Ukrainian Armed Forces said enemy forces were "trying to conduct offensive actions at the Bakhmut and Avdiivka directions," both in the eastern Donetsk region. Those attacks and others in Donetsk had been repelled, it said.

It said that parts of Dnipropetrovsk and Zaporizhzhia regions also came under attack, especially the town of Orikhiv.

Svitlana Mandrych, deputy head of Orikhiv, said a total of 324 shells had landed in the town on Wednesday

"Nine wounded residents...The infrastructure of the city is being destroyed. The population is being eliminated," she said, appealing to the townspeople to remain in shelters.

"We still have a night to survive ahead. Now we hear explosions again," Mandrych said.

The General Staff said Russian forces continued to use cruise missiles as well as drones and multiple launch rocket systems. Another 10 Iranian-made drones had been shot down Wednesday, it said.

It said the Ukrainian air force was again active — carrying out 27 strikes.

Ministers of defense from several countries are gathering to discuss weapons requirements and how the countries can continue to support Ukraine militarily as they battle Russia’s ongoing invasion of their country.

The third priority is “air defense” including missiles for Ukraine’s current medium-range air defense systems, the S-300 and SA-11. The list also states Ukraine needs a “transition to Western-origin layered air defense systems” and “additional Western and Soviet-era SHORAD systems.” Ukraine has been asking for more air defense systems, but the need has become more urgent as Russia has increased its use of Iranian-made drones.

Ukraine’s government has appealed to people to reduce their electricity consumption to avoid blackouts as Russian missiles target the country’s energy infrastructure, saying peak demand needs to be reduced by 25%.

Prime Minister Denys Shmyhal called on citizens and businesses to reduce electricity consumption from 5 p.m. to 10 p.m. in order to stabilize the power system, after the damage caused by Russian missile attacks this week.

But to avoid power outages, he said, “it is necessary to achieve a deliberate reduction in electricity consumption from 5 p.m. to 10 p.m. across Ukraine by 25%.” 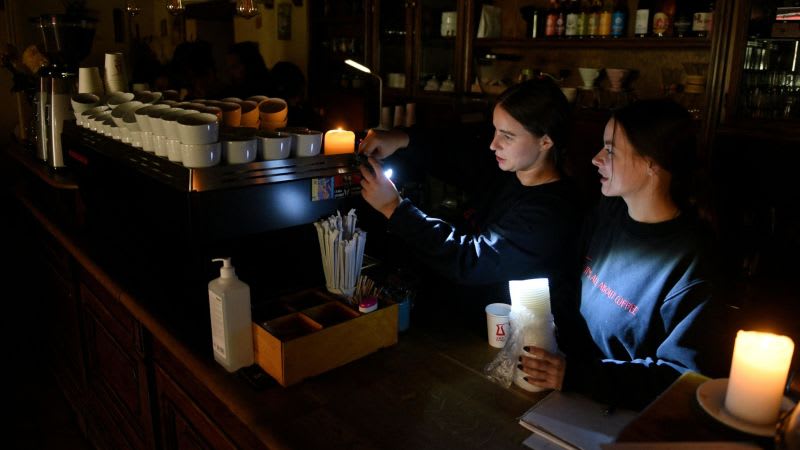 Ukraine says its forces have continued to advance in the southern region of Kherson, liberating five more villages in a slow push southwest.

The five villages are relatively close together in a largely rural part of the region.

More on Ukraine's southern counteroffensive: Last week, a senior Ukrainian official said Ukraine's military had recaptured 2,400 square kilometers (more than 926 square miles) of territory in the Kherson region “since the beginning of the full-scale war."

Ukrainian forces have been making steady progress in Kherson since beginning an counteroffensive at the end of last month, and their successes have sparked rare criticism of Moscow’s war effort among pro-Russian figures.

Kherson is one of the four regions in Ukraine that Russia has claimed it is annexing in violation of international law.