Russian forces have launched hundreds of missile strikes in Ukraine over the past week, most of them at civilian targets, a senior US military official said Friday.

“Since the attack at the Kerch Strait bridge last week, we’ve seen the Russians continue to retaliate. The use of precision guided munitions in a very imprecise way has continued over the course of the week,” the official said. “I think it’s fair to say we’re in the hundreds in terms of the number of missiles that the Russians have launched against Ukrainian targets.”

“They have been used at civilian targets either indiscriminately or certainly in a deliberate way as it relates to infrastructure targets like electricity or bridges or otherwise,” the official said.

The latest was a strike on energy infrastructure in the Kyiv region. A Russian missile attack Saturday morning severely damaged a facility, the Ukrainian national energy company Ukrenergo said in a statement, also warning about possible rolling blackouts.

The southern city of Zaporizhzhia was also hit by apparent Russian missile and drone attacks Saturday, according to Oleksandr Starukh, the head of the region's military administration.

Russian President Vladimir Putin said Friday that there is no need for more “massive” strikes against Ukraine “at least for now.” He also said he had no regrets for his actions.

Russia continues to face international backlash for the war and global outrage at its targeting of civilians. European lawmakers voted overwhelmingly Thursday to declare Russia a “terrorist” regime.

Russia’s military uses rape and sexual violence as a part of its “military strategy” in Ukraine, a UN envoy said in an interview with AFP on Thursday.

UN Special Representative on Sexual Violence in Conflict Pramila Patten said the United Nations has verified “more than a hundred cases” of rape or sexual assault incidents in Ukraine since February, citing in part the findings of a UN panel of expert in September.

CNN did report at the time on the findings of the UN’s Independent International Commission on Ukraine. The commission said it had uncovered evidence of war crimes, including cases of rape and torture of children, without specifying the number of alleged cases.

But Patten was more specific in her comments.

“When you hear women testify about Russian soldiers equipped with Viagra, it's clearly a military strategy,” Patten said on Thursday.

Patten repeated that the age of the sexual violence victims in the cases the UN has investigated ranges from four to 82-years old. She said “there are many cases of sexual violence against children, who are raped, tortured and sequestered.”

Patten also said the number of victims is “never going to reflect reality,” because it is an underreported crime.

“I have not stopped since February to emphasize the importance of having credible investigations into these cases of violence,” she said.

Russia’s government spokesman Dmitry Peskov was asked in September about allegations of Russian forces committing war crimes in Ukraine, prior to the UN panel reporting on its findings, to which he responded it was all a “lie.”

Ukraine's counteroffensive in Kherson has intensified, according to a senior official in the southern region's Russian-backed administration.

"Indeed, the active phase of fighting, which we expected, has begun," Kirill Stremousov, the deputy head in Kherson said on Saturday, while speaking to the pro-Kremlin "Soloviev Live" show.

He added the "(Russian) army is ready to repel all these attacks and stand to the end, because Kherson region is part of the Russian Federation."

According to Stremousov, the goal of the Ukraine forces is to gain a foothold on the right bank of the Dnipro river. He urged residents in the area to "seize the moment, call the hotline, pick up the children and send them on vacation."

On Thursday, the Russian-appointed head of the Kherson region, Vladimir Saldo, asked the Russian leadership to help evacuate locals to other regions in order to protect them from missile strikes.

Ukraine's counteroffensive: Ukrainian forces have been making steady progress in the region since beginning an offensive at the end of last month.

Last week, the Ukrainian military said it has recaptured 2,400 square kilometers (about 925 square miles) of territory in Kherson region “since the beginning of the full-scale war,” a senior Ukrainian official said on October 7.

The first group of Russian soldiers to form a new joint force with Belarusian troops arrived in the country Saturday, according to a statement from Minsk's defense ministry.

"The first echelons with Russian servicemen who are part of the regional grouping of troops arrived in the Republic of Belarus. The servicemen were warmly welcomed with bread and salt," the statement said.

"Due to the aggravation on the western borders of the Union State, we agreed to deploy a regional grouping of the Russian Federation and the Republic of Belarus,” Belarusian leader Alexander Lukashenko said Monday, according to state news agency Belta.

The move follows claims made by Belarus that Ukraine is planning to attack its territory. The country’s defense minister said Tuesday that it is a defensive measure and was to ensure security.

The defense ministry also published a video Saturday showing the arrival of Russian military personnel and equipment, which included a comment from the deputy commander of a Russian military company, Viktor Smeyan.

“We arrived on Belarusian soil. The meeting was very warm, very pleasant. We arrived in the Republic of Belarus to help the fraternal Belarusian people, we are ready to perform any tasks that we receive from the command. Everyone is in a fighting mood,” Smeyan said.

The impact of such an intervention in terms of pure manpower would be limited; Belarus has around 45,000 active duty troops, which would not significantly bolster Russia’s reserves. But it would threaten another assault on Ukraine’s northern flank below the Belarusian border.

CNN's Tim Lister and Rob Picheta contributed to this report.

Russian attacks have killed at least 11 civilians and injured 11 others in Ukraine over the past day, a senior Ukrainian official said on Saturday.

In the Donetsk region, eight civilians died and six were injured, Kyrylo Tymoshenko, the deputy head of the Ukrainian president’s office, said in a statement on Telegram. He added two more people were killed and one injured in the Zaporizhzhia region.

Tymoshenko also said one civilian was killed and another was injured in the Kharkiv region. Other injuries were reported in the Dnipro and Kherson regions, according to the official.

Some background: Russian forces have launched hundreds of missile strikes in Ukraine over the past week, most of them at civilian targets, a senior US military official said Friday.

One official said this is deliberate — Russians are mainly targeting civilians, especially civilian infrastructure including “electricity or bridges or otherwise.” The bombing of power installations appeared to be an unsubtle hint at the misery Russian President Vladimir Putin could inflict as winter sets in.

Read more about the strikes here.

Russia has increased security measures at military registration and enlistment offices due to "increasing attacks" on those facilities, a senior Russian official said Saturday.

"Detention groups of the Russian Guard are deployed in a number of cities, including Moscow, to the buildings of the military registration and enlistment offices. In addition, throughout the country they are included in the patrol routes of the non-departmental security crews of the Russian Guard," Alexander Khinshtein, a deputy in the Russian parliament, said in a statement on his Telegram channel.

Some context: Since Russia announced a plan for mobilization last month, protests against the drive have erupted in ethnic minority regions, and some military enlistment offices have been set on fire. The announcement also prompted anti-war protests across Russia.

According to Khinshtein, intruders have been caught "red-handed" trying to launch an attack on military enlistment centers.

The battlefield is “complicated but controlled” as Ukrainian forces push ahead with their counteroffensive to take back parts of the country seized by Russia in the early days of Moscow’s invasion, Commander-in-Chief of Ukraine’s Armed Forces Valerii Zaluzhnyi said Thursday.

Take a look at where the state of control stands in Ukraine: 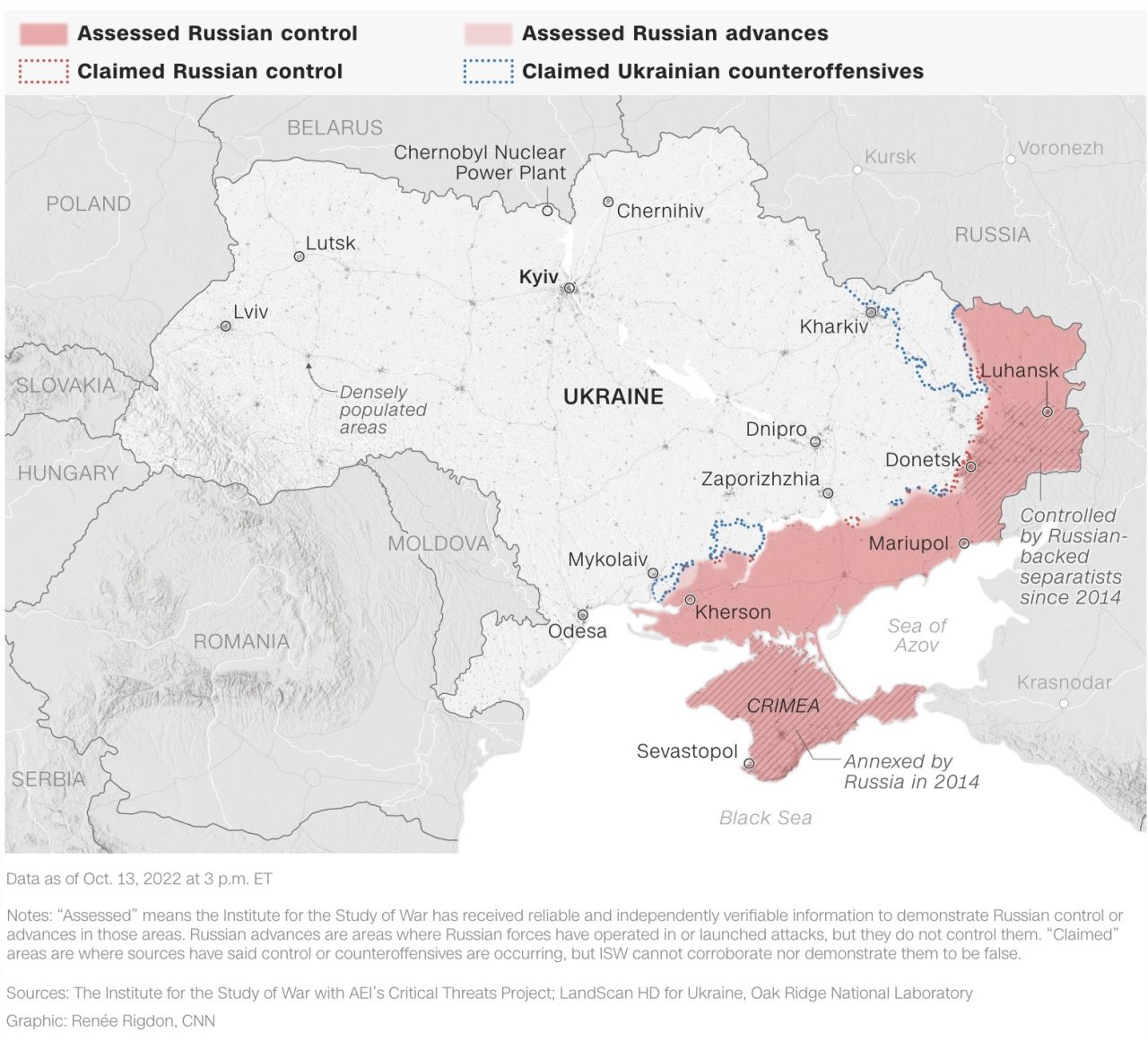