“It is known that a part of the station has recently been controlled by a Kadyrov gang ... which placed equipment and weapons directly in turbine halls #1 and #2,” the Center of National Resistance said in a statement.

The center is a military organization designed to support and coordinate Ukrainian troops.

On Wednesday, the Chechen leader Kadyrov wrote in a Telegram post that his unit is in Enerhodar, a city adjacent to the Zaporizhzhia plant. He accused Ukrainians of firing “indiscriminately at the coastline of Enerhodar, its industrial area and the Zaporizhzhia NPP.”

Remember: Zaporizhzhia Nuclear Power Plant, the largest nuclear complex of its kind in Europe, was seized by Russian forces at the start of the war.

In its statement, the Center of National Resistance also claimed that “Russia is trying to connect the Zaporizhzhia NPP to its power system as soon as possible.”

“The occupiers are hastily carrying out measures to convert the spent nuclear fuel storage system at the ZNPP to Russian standards, as well as adapting all nuclear reactors of the ZNPP to use Russian fuel assemblies,” the Center wrote.

More context: The Chechen Republic is a region in Russia’s north Caucasus.

Russian forces fought a brutal war for control of the territory in the mid-1990s and the early 2000s. Kadyrov was once a guerrilla who fought against Russia before switching sides.

During the Second Chechen War, which coincided with the rise of Putin, Kadyrov helped Moscow wrest control of the Chechen Republic from separatist rebels.

Kadyrov has been accused by international and independent observers of gross human rights violations in his home territory and beyond. He leads sizeable paramilitary forces that – while formally a part of Russian security structures – have personal loyalty to him.

Very fierce battles are taking place around the eastern Donetsk region, and the Ukrainian military is holding its position there, President Volodymyr Zelensky said in his nightly address Saturday.

“Active operations continue in various areas of the front. A very difficult situation persists in Donetsk region and Luhansk,” the Ukrainian leader said, referring to another eastern region that has been occupied by Russian troops for months. 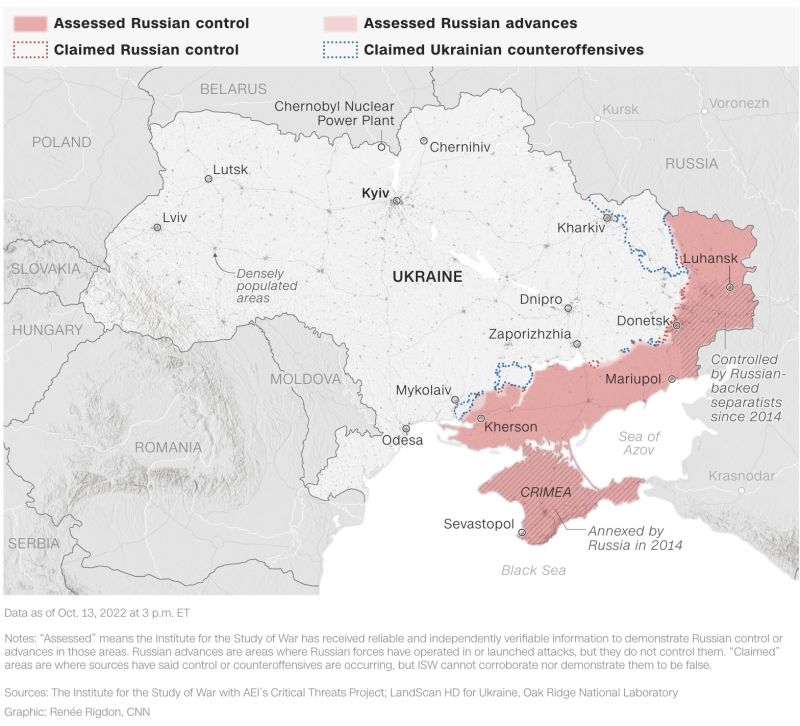 Ukrainian officials say Russia has been deploying an increasingly familiar weapon in its attacks: “kamikaze drones.”

Most recently, the southern Ukrainian city of Zaporizhzhia was hit with four strikes by kamikaze drones overnight Saturday. Authorities said Moscow has also used them in assaults against Kyiv, Vinnytsia, Odesa and other cities across Ukraine in recent weeks.

Kamikaze drones, or suicide drones, are a type of aerial weapon system. They are known as a “loitering munition” because they are capable of waiting in an area identified as a potential target and only strike once an enemy asset is identified.

The drones are capable of carrying precision-guided missiles and have a payload of approximately 50 kilograms (110 pounds). They are small, portable and can be easily launched — but their main advantage is that they are hard to detect and can be fired from a distance.

CNN's Ivana Kottasová and Josh Pennington contributed to this report.

A Ukrainian diplomat stressed the importance of nuclear deterrence Sunday, responding to comments from France's president that he would not commit to making a retaliatory strike if Russia used a nuclear weapon.

“With regard to the global response, it has to be very harsh ... this is a clear red line," ambassador Oksana Markarova said. "This is on, you know, on what the whole security infrastructure of Europe and global is built.”

“I just hope everyone understands that,” Markarova added.

The Ukrainian ambassador attempted some deterrence of her own, suggesting not even a nuclear weapon would curb the Ukrainian people’s will to defend their homeland.

“We in Ukraine will resist and we will not give up regardless of what Russian Federation uses against us," she said. "We have, I think, proven it. From rockets, to atrocities, to anything that they try to do in Ukraine, it doesn't break our will. So there is no point for Russian Federation to use anything else because it will not stop us in defending our homes."

Markarova also reiterated Ukraine’s call for air defense systems from the US to combat Russian air strikes across the country. She said the country is “counting on” further reinforcements from the US.

A Ukrainian diplomat said Starlink satellite services are “instrumental” to combatting Russia’s invasion and that she’s confident a dispute over payment for the system can be settled.

Starlink internet terminals are produced by US billionaire Elon Musk’s company, SpaceX, and have been the subject of a back-and-forth between Musk and the Pentagon in recent weeks.

Ambassador Oksana Markarova described Ukraine’s relationship with Musk’s company as “excellent cooperation” in an interview with CBS Sunday. She stressed the importance of the terminals in facilitating humanitarian support to the most affected areas of Ukraine, adding the country will need that support for “a longer time."

“It's very important to continue having (Starlink) and I'm positive that we will find a solution there,” Markavova said.

If you haven’t been following this: Starlink has been a vital source of communication for Ukraine’s military. The company’s internet terminals have allowed troops to stay connected even as cellular phone and internet networks have been destroyed in the war with Russia.

SpaceX has warned the Pentagon it may stop funding the service in Ukraine unless the US military kicks in tens of millions of dollars per month. The company also requested the Pentagon take over funding for Ukraine’s government and military use of Starlink, which SpaceX claims would cost more than $120 million for the rest of the year and could cost close to $400 million for the next 12 months.

But on Saturday, Musk seemed to reverse course on Twitter— though it wasn’t clear if the issue was actually settled.

“The hell with it … even though Starlink is still losing money & other companies are getting billions of taxpayer $, we’ll just keep funding Ukraine govt for free,” a tweet from Musk’s verified account read.

Complicating Musk's relationship with officials in the country, the billionaire faced fierce criticism in Ukraine for publicly floating a peace plan that would see Kyiv surrender Crimea and agree to neutrality status. Some Ukrainian officials have since extended an olive branch.

The Ukrainian government says 54 people died in a Russian assault on an apartment complex in the eastern city of Izium on March 9 — almost half of the building’s residents.

Entire families were killed in the attack, but their fates remained largely unknown until a few weeks ago. Ukrainian forces pursuing a counteroffensive reclaimed Izium after six months of Russian occupation, revealing a mass burial site on the outskirts of the city.

Most of the residents of the apartment building, 2 Pershotravneva street, were buried there among more than 400 graves, few with identifying marks other than numbers daubed on rough wooden crosses.

After speaking to a survivor, ex-residents and family members, and reviewing photos and video taken in the aftermath of the attack and following the town’s liberation, CNN can now tell the story of what happened at 2 Pershotravneva on that day.

The fragile Black Sea grain deal will continue after Nov. 22, when it is set to expire, Ukrainian Infrastructure Minister Oleksandr Kubrakov said Sunday.

Kubrakov made the comments during a meeting with Turkish Defense Minister Hulusi Akar in Istanbul. They come after Russian officials, including President Vladimir Putin, cast doubt on the deal's future this week.

“The participating parties of the Initiative — the UN, Turkey and Ukraine — expressed their readiness to continue operating and assured maximum efforts for its successful implementation. There is no doubt that the grain corridor will continue operating after Nov. 22,” Kubrakov said.

The minister also emphasized the importance of getting faster ship inspections by the Joint Coordination Center. This allows for “a significant increase in the volume of grain exports to the countries of Africa, Asia, and Europe and prevents the formation of inspection queues,” he said.

Some background: The Black Sea Grain Initiative — which was brokered by the UN and Turkey — was signed by representatives from Russia and Ukraine in July.

Kubrakov said almost 7.7 million tons of agricultural products have been exported since the launch of the initiative, which “has stabilized food prices and countered the threat of global hunger.”

Russia casts doubt: Gennady Gatilov, Russia’s ambassador to the UN in Geneva, said this week that Russia could leave the deal, according to Reuters. Later, Putin weighed in, saying Moscow would shut the export corridors if they are used to carry out “terrorist attacks.”

The US will make no distinction in its response to Russia using any form of nuclear weapon in its war with Ukraine, national security adviser Jake Sullivan told CNN Sunday.

Sullivan was responding to a hypothetical question from CNN's Dana Bash on "State of the Union." Bash asked whether the US would treat the so-called "tactical" use of a nuclear weapon — taking out a small target or detonating in the Black Sea, for example — any differently from wide-scale attacks.

"From our perspective, we believe it is incumbent upon the United States, working with our NATO allies and partners and other responsible countries around the world, including the likes of China and India, to send a very clear and decisive message to Russia that they should not contemplate the use of nuclear weapons in this conflict," Sullivan continued.