“This is another concerning development that I sincerely hope will be resolved swiftly,” Grossi said in a statement.

The Ukrainian state energy company Energoatom claimed in a Telegram post on Monday that two workers at the Russian-occupied nuclear power plant were “kidnapped” and had pleaded for Grossi to intervene.

The IAEA statement on Tuesday confirmed the detentions, but did not name the staff, stating: "Director General Grossi expressed deep concern about the recent detentions of two other ZNPP staff members, which have been confirmed by the IAEA."

Separately, the statement welcomed the release of a ZNPP Deputy Director General, Valeriy Martynyuk, who was detained early last week.

The nuclear plant, which sits in the Russian-occupied part of the Zaporizhzhia region, is the largest in Europe. It has been held by Russian forces for more than seven months but is operated by its Ukrainian staff.

The United States, France and the United Kingdom plan to discuss Iran’s drone transfers to Russia at a closed UN Security Council meeting Wednesday, a US official told CNN.

The three countries have said that the transfer of Iranian-made drones is a violation of UN Security Council Resolution 2231, which restricts certain arms transfers to or from Iran. It is unclear whether they will raise this specific point in the meeting tomorrow or move to snap back sanctions on Iran for the arms transfers.

“I think you probably saw earlier today, our French and British allies publicly offered the assessment that Iran's supply of these UAVs to Russia is a violation of UN Security Council Resolution 2231, and this is something that we agree with,” State Department principal deputy spokesperson Vedant Patel said Monday.

UNSCR 2231 was tied to the 2015 Iran nuclear deal, and elements of that resolution, including a ban on the transfer of conventional weapons, were phased out in 2020. The Trump administration attempted to unilaterally snap back the arms embargo in September 2021 and the Biden administration told the UN Security Council it was reversing those efforts in February 2021.

Patel noted that UNSCR 2231 prohibits the transfer from Iran of all items, materials, equipment and goods and technology unless approved in advance by the UN Security Council on a case-by-case basis.

He also said the range of the drones being greater than 300km put them in violation of the resolution.

Russia struck more infrastructure targets in Ukraine on Tuesday and at least three cities, including Kyiv, are experiencing power interruptions, according to officials.

Since Oct. 10, nearly a third of Ukraine’s power stations have been destroyed, President Volodymyr Zelensky said as he urged people to conserve their energy use.

Here's what else to know: 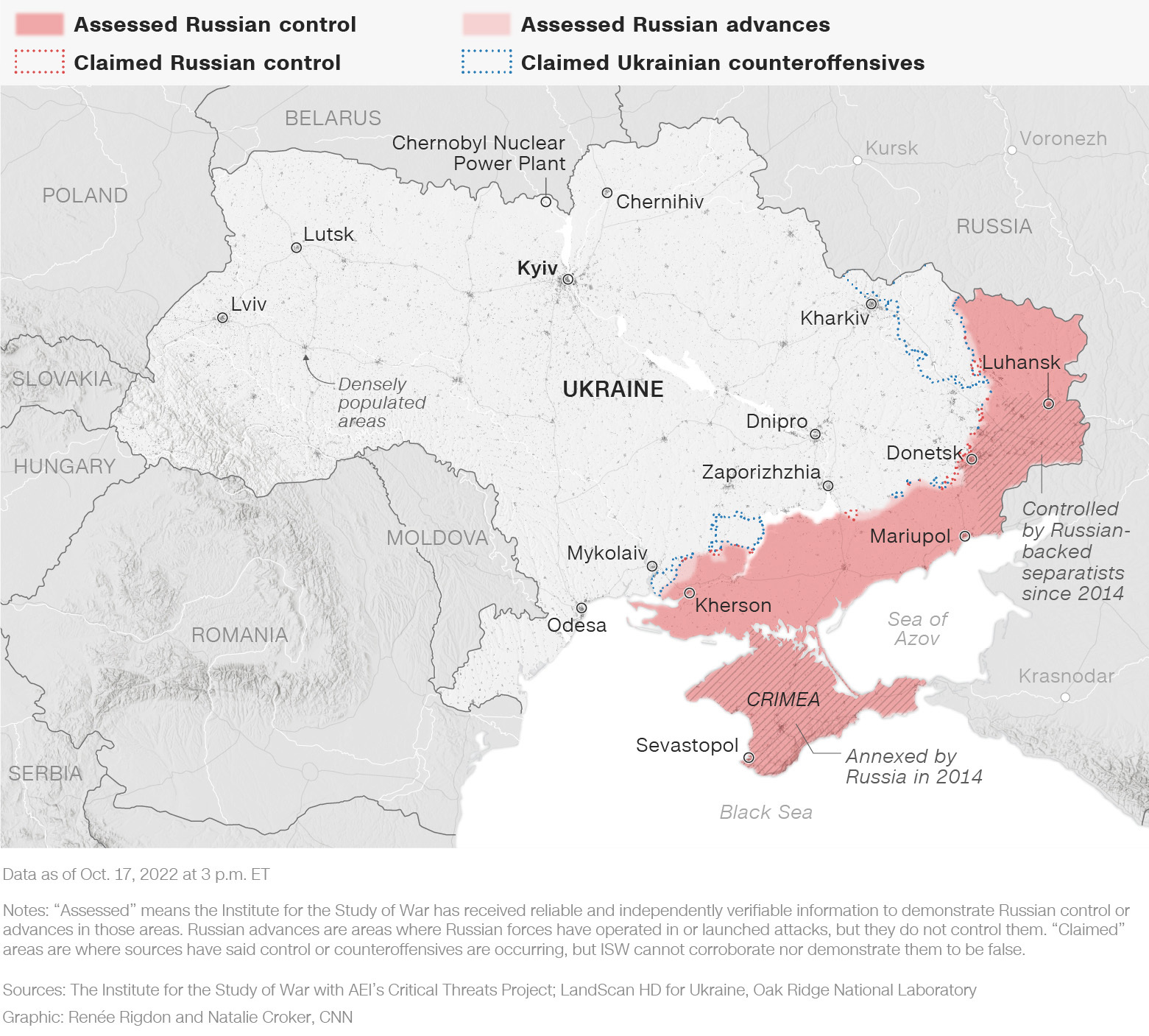 Iran has sent military personnel to Crimea to train and advise the Russian military on the use of Iranian-built drones, according to two sources familiar with US intelligence. Moscow has used these drones to devastating effect in its war in Ukraine, the sources say.

Russia has launched many of what is believed to be a store of hundreds of Iranian-made drones from Crimea in a fusillade that has targeted Ukrainian cities and energy infrastructure in increasing numbers in recent weeks. The drones have been seen as a signal of growing closeness between Tehran and Moscow.

CNN has reached out to the Iranian mission at the United Nations.

Earlier on Tuesday, a spokesperson for Iran's foreign ministry said reports that Tehran was sending weapons, including military drones, to Russia for the war in Ukraine were "untrue."

However, State Department principal deputy spokesperson Vedant Patel said Tuesday that the deepening of relations between Moscow and Tehran should be seen as “a profound threat.”

It was not immediately clear how many trainers traveled to Crimea – which was annexed by Russia in 2014 – and whether they remain present. One source briefed on US intelligence said “dozens” of Iranian personnel had been sent.

US officials have said that when Russia first began testing and deploying the drones in Ukraine in August, many of them experienced numerous failures. Russian operatives had been training on the systems inside Iran, but Iranian personnel began traveling to Crimea in recent weeks to help Russia operate the systems and try to fix their problems.

Tehran has provided two types of drones: Shaheds, which explode on impact and have a range of upwards of 1,000 miles, and the Mohajer-6, which can both carry missiles and be used for surveillance.

The Daily Mirror first reported the trainers’ presence in Ukraine.

The lawyers for WNBA player Brittney Griner have told CNN that the athlete's birthday is a “difficult” occasion for her as she awaits her appeal hearing next week.

Griner, who turned 32 years old on Tuesday, spent the day “away from her family, from friends, from teammates” in her prison cell in Moscow’s suburbs, according to her lawyer Maria Blagovolina who spoke to CNN’s Matthew Chance on Tuesday.

Blagovolina and her colleague Alexander Boykov spoke of how they spent a few hours with Griner as part of an effort to “cheer her up as much” as they could, relaying birthday messages from “all over the world.”

Boykov said Griner is not doing any "better" or "worse" than her fellow inmates, adding that her "likable character" has helped with personnel in the prison. Blagovolina said the athlete is attempting to "do some exercises" every day despite the "limited" facilities available to her.

Her lawyers told CNN as Griner’s Oct. 25 appeal hearing draws closer, the athlete is feeling anxious and is “very much concerned with the outcome of the appeal."

“Brittney can’t help thinking that if this [prisoner] swap doesn't happen, she will have to spend the whole period of the sentence in Russia. So that's why she is very much concerned with the outcome of the appeal,” Boykov said.

Griner’s anxiety ahead of the upcoming hearing stem from the fact the “legal process will be basically over after the appeal,” Boykov added, highlighting her concern that “if anything goes wrong, she will have to serve [her jail time] here in Russia.”

Both lawyers reiterated the extreme nature of Griner’s nine-year sentence, with Blagovolina calling it “very severe for this type of crime and this amount of this substance,” expressing her strong hope that the “turnover sentence will be reduced.”

When asked how much information the Russian legal team has about the negotiations between Russia and the US to secure her release, Blagovolina said: “We are in Russia….I would say we have very limited information about what is going on about the status of negotiations. What I can say is that as her lawyers we are doing as much as we can. So, we hope that the government does the same.”

She added that Griner is “informed” about what's going on and “really” appreciated the fact that President Joe Biden met with her wife Cherelle in September.

“So, she knows what's being done for her,” Blagovolina added.

“Wherever possible, we are trying to speed up the restoration work,” he said.

He said the fact that Russia was “crawling to Tehran” for support with weaponry was a sign of weakness.

“We must remember that the very fact that Russia is asking Iran for such assistance is the Kremlin's recognition of its military and political bankruptcy,” he said.

“Strategically, this will not help them in any way. It only further proves to the world that Russia is on the trajectory of its loss and is trying to involve someone else in its accomplices in terror," the Ukrainian president said.

Iran's Ministry of Foreign Affairs denied claims that the country is sending weapons for Russia to use in Ukraine.

Pentagon spokesperson Brigadier General Patrick Ryder said he has seen the reports but does not have “have any information to corroborate at this time."

US consular officers spoke by phone with detained Americans Brittney Griner and Paul Whelan on Tuesday, according to the State Department.

State Department spokesperson Ned Price said last week that the US Embassy has not had consular access to Griner since early August.

Fighting for their release: The Biden administration has had communications with Russia as part of ongoing efforts to secure the release of Griner and Whelan “as recently as within past days” a senior administration official told CNN.

The US first put an offer for a prisoner swap on the table with Russia back in June — the details of which CNN exclusively reported -— and “conversations have not been static since then,” the official said.

Despite the “pretty persistent” pace of discussions between the US and Russia to secure the Americans’ release, the official said that the Biden administration has yet to receive a serious counteroffer from the Russian side.

Tuesday was Griner's 32nd birthday and she expressed gratitude for the support she has received, according to a statement shared by Maria Blagovolina, a partner at Rybalkin, Gortsunyan, Dyakin and Partners law firm.

“Thank you everyone for fighting so hard to get me home. All the support and love are definitely helping me,” Griner said in her message, according to the statement.

The new commander of Russia’s so-called Special Military Operation in Ukraine said on Tuesday that his country’s goal was a Ukraine that was “friendly” to Russia and independent of the West.

“Russians and Ukrainians are one people,” General Sergey Surovikin said on state television. “We just want one thing, for Ukraine to be independent of the West and NATO and be friendly to the Russian state.”

Surovikin took up his post commanding Ukraine operations just over a week ago, following an appointment approved by the Russian Defense Minister Sergei Shoigu.

“We do not strive for high rates of advance,” he said on Tuesday. “We protect each soldier and methodically ‘grind’ the advancing enemy.”

He described the state of Russia’s campaign in Ukraine as “tense.”

“The enemy does not abandon attempts to attack the positions of Russian troops,” he said.