We've wrapped up our live coverage for today. Read more on Russia's war in Ukraine here, or you can scroll through the updates below.

Earlier this week, a Ukrainian military official said some of the fiercest battles in the conflict are taking place in the eastern Luhansk region, especially in the Svatove-Kreminna area, north of Russian-occupied Severodonetsk. 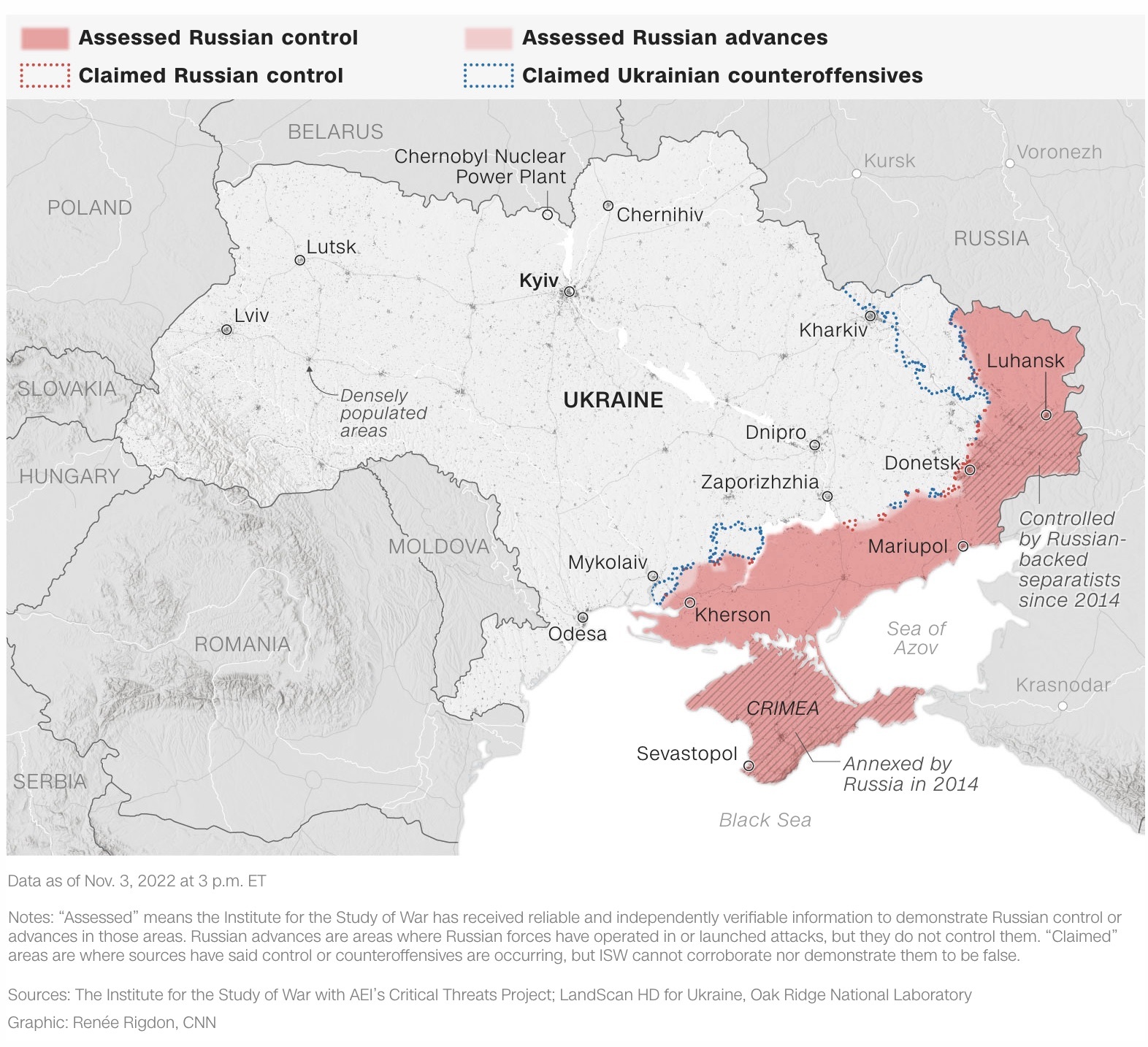 The vessels carried more than 800,000 tonnes of food products from ports in Odesa, Chornomorsk and Pivdenny, Zelensky said during his nightly address.

“The destinations are Egypt, Libya, Morocco, Algeria, Oman, Turkey, China and Ethiopia. Moreover, the ship to Ethiopia with 30,000 tonnes of wheat on board was chartered by the UN (World) Food Programme,” the Ukrainian leader said.

Zelensky called this week's revival of the Black Sea grain corridor “one of the most significant international results of the entire autumn.”

“We showed that the world is capable of guaranteeing stability despite any threats posed by Russia,” he said. "The world did not succumb to Russian blackmail, key actors acted decisively and, as a result, the aggravation of the food crisis was avoided,” the Ukrainian president said. “When the world is united, terrorists stand no chance.”

Zelensky concluded his address with what he called “another proof of the power of real world unity.”

He said Ukrainian charity platform UNITED24 has received $220 million in donations from people living in more than 100 countries around the globe since its launch six months ago. Ukraine will launch a new fundraising effort next week within the framework of the platform to raise money for a fleet of marine drones, according to Zelensky.

American basketball star Brittney Griner, whose detention has raised fears she is being used as a political pawn during Russia's war in Ukraine, got another visit from a US embassy official this week.

“We are told she’s doing as well as can be expected under the circumstances,” White House press secretary Karine Jean-Pierre told reporters Thursday.

Griner was detained in February and sentenced to nine years in prison on drug smuggling charges in August. A Moscow court rejected her appeal in a hearing on Oct. 25.

Here's what we know about the effort to get Griner out of detention:

The US has offered a prisoner swap: Jean-Pierre reiterated Thursday that “the US government made a significant offer to the Russians to resolve the current unacceptable and wrongful, wrongful detentions” of Griner and Paul Whelan, another American detained by Russia.

US officials have proposed a prisoner swap with Moscow, and those efforts have continued in recent weeks despite the lack of apparent progress, national security adviser Jake Sullivan said in a statement last month.

“We have not been meeting with much positive response but we’re not stopping,” US President Joe Biden told reporters in October.

A senior Biden administration official who spoke to CNN that month said Russia has yet to present a serious counteroffer, but "they are not nonresponsive."

"They continue to respond with something that they know not to be feasible or available,” the official said.

An unofficial line of communication: Former Gov. Bill Richardson of New Mexico – whose namesake center works on behalf of families of hostages and detainees – recently traveled to Russia to discuss the possible release of Griner and Whelan.

In early October, he told CNN he was “cautiously optimistic” the two Americans could be released by the end of the year.

Richardson, who also served as US ambassador to the United Nations under former President Bill Clinton, said he’s working with both their families and coordinating with the White House to work toward their releases. The former governor played a role in the release of Trevor Reed, an American veteran detained in Russia for three years before his release in April.

The White House has previously distanced itself from Richardson's efforts.

Ukrainian President Volodymyr Zelensky called Iran's claim about sending a "limited" number of drones to Russia a lie in his nightly address Saturday.

He also disputed the timeline presented by Tehran.

“Today there were messages from Iran, from official representatives. There they decided to admit that they did supply drones for Russian terror. But even in this confession, they lied,” Zelensky said. “We shoot down at least 10 Iranian drones every day, and the Iranian regime claims that it allegedly gave little — and even before the start of the full-scale invasion.”

Zelensky said that if “Iran continues lying about the obvious,” even more efforts will be made to investigate “the terrorist cooperation between the Russian and Iranian regimes and what Russia is paying Iran for such cooperation.”

What Iran said: Iran’s Foreign Minister Hossein Amirabdollahian said during a press conference Saturday that Tehran had provided a limited number of the weapons before Russia invaded Ukraine.

“Some Western countries have accused Iran of helping the war in Ukraine by providing drones and missiles to Russia," Amirabdollahian said. "The part regarding missiles is completely wrong. The part about drones is correct, we did provide a limited number of drones to Russia in the months before the start of the war in Ukraine.”

Russia has pummeled Ukrainian cities with missile and drone strikes for much of the past month, targeting civilians and large swaths of the country’s critical infrastructure.

By Monday, 40% of Kyiv residents were left without water, and widespread power outages were reported across the country. On Thursday, Ukrainian President Volodymyr Zelensky accused Russia of "energy terrorism" and said that about 4.5 million Ukrainian consumers were temporarily disconnected from the power supply.

The destruction exemplifies how indiscriminate bombing remains the Kremlin’s preferred tactic eight months into its war on Ukraine. Moscow’s vaunted hacking capabilities, meanwhile, play a peripheral, rather than central, role in the Kremlin’s efforts to dismantle Ukrainian critical infrastructure.

“Why burn your cyber capabilities, if you’re able to accomplish the same goals through kinetic attacks?” a senior US official told CNN.

But experts who spoke to CNN suggest there is likely more to the question of why Russia’s cyberattacks haven’t made a more visible impact on the battlefield.

Effectively combining cyber and kinetic operations “requires a high degree of integrated planning and execution,” argued a US military official who focuses on cyber defense. “The Russians can’t even pull that sh*t off between their aviation, artillery and ground assault forces.”

A lack of verifiable information about successful cyberattacks during the war complicates the picture.

A Western official focused on cybersecurity said the Ukrainians are likely not publicly revealing the full extent of Russian hacks and their correlation with Russian missile strikes. That could deprive Russia of insights into the efficacy of their cyber operations, and in turn affect Russia’s war planning, the official said.

To be sure, a flurry of suspected Russian cyberattacks have hit various Ukrainian industries, and some of the hacks have correlated with Russia’s military objectives. But the kind of high-impact hack that takes out power or transportation networks have largely been missing.

That’s a stark contrast to 2015 and 2016 when, following Russia’s illegal annexation of Crimea, it was Russian military hackers, not bombs, that plunged more than a quarter million Ukrainians into darkness.

An Australian man has died in Ukraine as fighting continues in the country, his family and the Australian government confirmed Saturday.

Trevor Kjeldal had said he was fighting on the front lines. In photographs and statements on his Instagram account dating back to May, Kjeldal said he was aiding Kyiv's forces in the conflict. Authorities did not provide information about how he died.

“Officials from the Department of Foreign Affairs and Trade are providing consular assistance to the family of an Australian who died in Ukraine," the department said in an email to CNN Saturday. "We send our deepest condolences to the family and request their privacy be respected during this difficult time.”

Kjeldal’s family confirmed his death in a separate statement.

“Trevor was a very treasured and loved member of our family. Our depth of sadness at his loss is unfathomable. We would like to thank DFAT for their ongoing assistance in bringing him home to us. At this incredibly sad time, we would request that the media respect our privacy as we grieve,” it read.

Australian officials did not immediately respond to CNN’s questions on whether Kjeldal had gone to Ukraine to join the front lines.

CNN cannot independently confirm what Kjeldal was doing in Ukraine, or whether he died in conflict.

Australia’s Prime Minister Anthony Albanese offered his condolences to Kjeldal’s family and friends during a press conference in Brisbane, calling the news of his death “tragic.”

Russians convicted of murder, robbery, larceny, drug trafficking and other grave offenses under the Criminal Code of the Russian Federation can be called up for military service, according to the law.

That makes it possible to mobilize hundreds of thousands of people who have been sentenced to probation or have recently been released from colonies who were previously forbidden to serve.

The only group of criminals exempted from the decree are those who committed sex crimes against minors, treason, spying or terrorism. Also excluded are those convicted of the attempted assassination of a government official, hijacking an aircraft, extremist activity and illegal handling of nuclear materials and radioactive substances.

The Kremlin has already mobilized an additional 18,000 soldiers above its goal of 300,000 to fight in its war in Ukraine from the general male population of Russia, Putin said Friday.

Power restrictions will be in place across at least seven Ukrainian regions Saturday, according to state energy company Ukrenergo.

“Repair and restoration works continue around the clock,” Ukrenergo wrote.

Ukraine has been facing a wide assault on critical infrastructure and power sources since early October.

This week alone, Russian attacks on critical infrastructure in the regions of Kyiv, Cherkasy, Kirovohrad, Kharkiv and Zaporizhzhia have left millions without electricity and water intermittently.