Egyptian President Abdel Fattah el-Sisi called for an end to the war between Russia and Ukraine at a speech during the opening of the World Leaders Summit at the COP27 UN climate conference.

The entire world is suffering because of the war between Russia and Ukraine,” Sisi said. “This war must stop, this war, and the suffering it has caused, must finish."

This year's UN climate summit is being held in the Egyptian resort city of Sharm El-Sheikh, where thousands of climate negotiators and advocates will gather to raise their ambitions on the climate crisis. Negotiators from nearly 200 countries will, over the next two weeks, debate future clean energy proposals to prevent the worst consequences of the climate crisis.

Sisi called on world leaders to urgently take “more measures and actions” to clarify how they will reduce emissions, which will encourage stakeholders to release “adequate funding” to face the challenge of climate change.

“There is no time to sit back, there is no space for hesitation for the sake of future generations,” Sisi said.

Read more about what to expect at COP27 here: 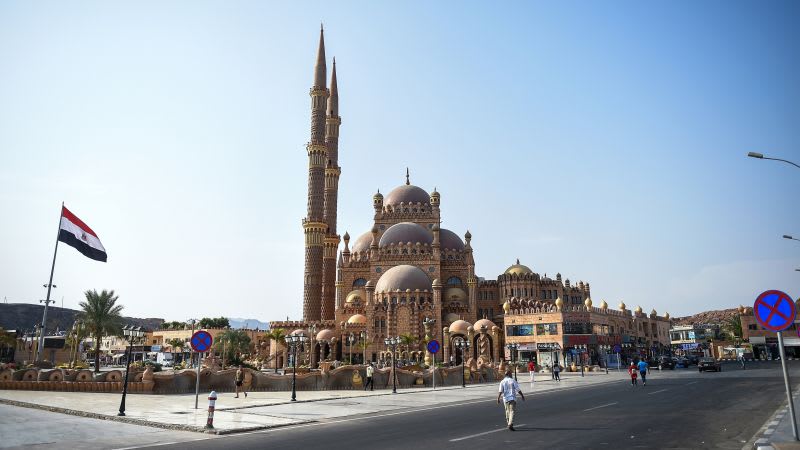 As countries convene at climate summit in Egypt, reports show the world is wildly off track. Here's what to watch at COP27 | CNN 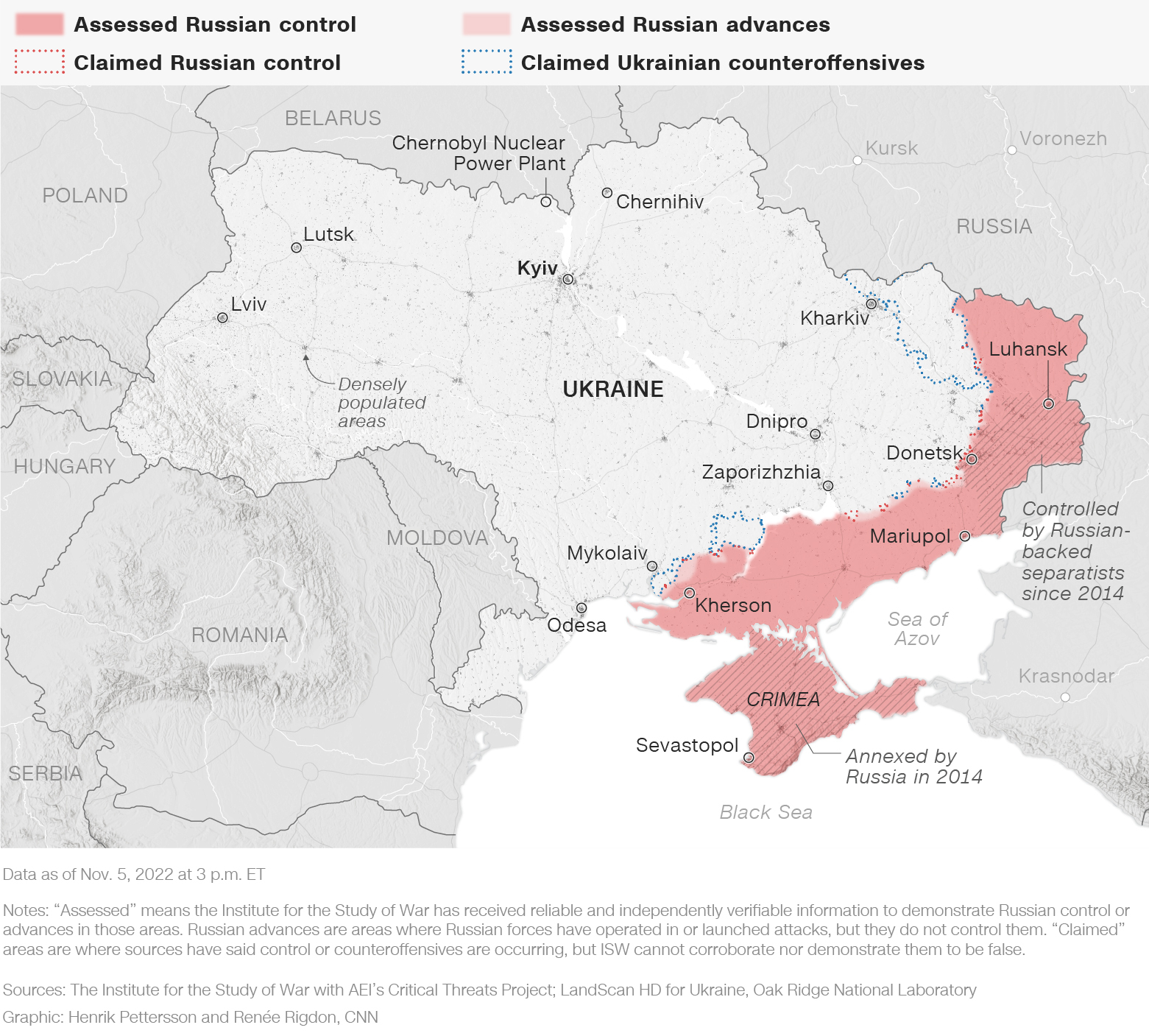 Russian forces have stepped up their scrutiny of civilians in occupied areas of Ukraine’s southern Kherson region, detaining locals to root out partisan resistance, according to the Ukrainian military.

In the occupied city of Kherson, Russian troops are now largely wearing civilian clothing and living in civilian housing as they “strengthen positions inside for conducting street battles,” according to the Ukrainian military and a resident of the city with whom CNN exchanged messages.

“Amid the counteroffensive of the Armed Forces of Ukraine, the occupiers have significantly intensified filtration measures,” the National Resistance Center, a creation of the Armed Forces of Ukraine, said on Monday. “Raids among the local population have intensified in the temporarily occupied part of Kherson region. The occupiers are actively looking for the underground movement.”

The National Resistance Center said that it was aware of dozens of detentions in recent days. It called on civilians to leave the occupied territories “if possible” while the Ukrainian military pushed its counter-offensive.

Fewer checkpoints, more aggressive behavior: A resident of the occupied city of Kherson told CNN through a third party on Sunday that Russian soldiers in occupied villages are behaving more aggressively towards civilians.

“On the west bank, near Snihurivka, there are cases of occupiers moving into locals’ houses when people move to the city,” the resident said. “Many soldiers came to the villages, they settle in empty houses. But there are cases when they kick people out of their homes.”

CNN is not identifying the Kherson resident for their safety. The city of Kherson itself has been “relatively quiet,” she said.

“From time to time you can hear automatic gunfire at night,” the resident said. “There is a curfew in the city, and no one goes out at night. The occupiers have created some kind of territorial defense in the city, which deals with security issues.”

Checkpoints within the city itself have been removed, she said.

“There are only checkpoints at the entrance to the city. At the checkpoint they check documents and look what is in the car. If it is public transport, then the soldier enters the minibus. It may vary, it all depends on the mood of the occupiers. They can start checking phones and force men to undress to check for tattoos.”

More young soldiers appearing: The resident said that most soldiers appear to be over the age of 30, but that they had begun to see more young men, around ages 18 to 20.

Russian authorities continued Monday to try to restore electricity after an outage on Sunday.

“I think electricity and communication will be restored in the near future,” Kirill Stremousov, the Russia-appointed deputy head of Kherson region military administration, said Monday morning in a video on Telegram. “There is no food problem in the city, there are foodstuffs. It's true that some pharmacies are shut, but it is not impossible to get social benefits. We keep working on this too.”

Stremousov said that authorities continued to offer “evacuation” to the eastern bank of the Dnipro River, including now to bed-ridden civilians or those with reduced mobility.

Evacuation offers like this have sparked concerns that Ukrainian citizens may be forced to go to Russian territory against their will. Reports emerged early in the war of tens of thousands of Ukrainian civilians being forcibly sent to so-called “filtration centers” before being moved to Russia. Moscow denounced the claims as lies, alleging that Ukraine has hindered its efforts to “evacuate” people to Russia.

The Kherson city resident who spoke to CNN viewed the idea of getting on an “evacuation bus” to Crimea as a “one-way ticket.”

One of the major issues Ukraine faces as it fends off Russian attacks is how to keep its population from freezing. With winter slowly approaching, Moscow has continually attacked energy and infrastructure targets in recent weeks. Here's the latest on the energy situation across Ukraine:

“From 6:00 a.m. and until the end of the day, there will be scheduled power outages in Kyiv city, and Kyiv, Chernihiv, Cherkasy, Zhytomyr, Sumy, Kharkiv, Poltava regions,” Ukrenergo said on its Facebook and Telegram channels.

“There will also be emergency outages in certain regions. They will be introduced by regional power distribution companies in case the deficit is bigger than planned. In case of emergency blackouts, electricity may be cut off earlier than planned and consumption restrictions may last longer.”

Ukraine’s electricity infrastructure has been under severe strain since Russia began attacking power plants on October 10.

“The country's power grid is still unable to resume full operation after the terrorist attacks of Russia,” Ukrenergo said. “We have to introduce power outages in some regions to avoid overloading of high-voltage infrastructure.”

Several buildings were ablaze in Donetsk city early on Monday morning following Ukrainian artillery strikes on the area, currently under Russian occupation, according to authorities and social media.

According to the Russian-backed Joint Center for Control and Coordination, six rockets hit Donetsk's Voroshilovsky District at 3:13 a.m. local time.

Witnesses on social media reported a shortage of water as the large fire continued burning after the shelling.

Social media videos geolocated by CNN showed the Donetsk Railway Administration building among those on fire in the central part of the city.

No casualties have been reported yet.

The Ukrainian capital of Kyiv is preparing for worst-case scenarios in the event of further Russian attacks on Ukrainian infrastructure which could potentially leave the city without electricity or water, according to its mayor Vitali Klitschko.

“Our enemies are doing everything to keep the city without heat, electricity, and water supply, and in general, they want us all to die. This is their task. And how well we'll hold out depends on how well we're prepared for different scenarios ... that's why we need to be prepared,” said Klitschko on Sunday.

"This is not a war, this is terrorism, this is genocide,” the mayor said regarding Russian attacks on energy infrastructure.

The city’s mayor encouraged some residents to think about staying with family and friends outside of Kyiv if the city is left without electricity or water.

“If you have extended family — this is for if we consider the worst case, if we were left without electricity and water supply — or friends outside Kyiv, where there is autonomous water supply, an oven, heating, please keep in mind the possibility of staying there for a certain amount of time,” the mayor said.

“His goal is for us to die, to freeze, or to make us flee our land so that he can have it. That's what the aggressor wants to achieve,” Klitschko said regarding Russian President Vladimir Putin.

Some background: Russian forces have pounded Ukraine's critical infrastructure in recent weeks, severely damaging its electrical grid and forcing many towns and cities across the country to impose scheduled hours-long blackouts.

Preparing for emergency: The city’s Director for the Department of Municipal Security, Roman Tkachuk, relayed fears later in the afternoon on Sunday that all possible action plans are being considered in the case of an emergency but there were no plans to evacuate the city, according to a statement from the Kyiv City Council.

Tkachuk said each district within the city will have about 100 heating centers to operate in case of emergencies in the winter. These heating centers will be equipped with heat, lighting, toilets, canteens, places to rest, warm clothes, blankets and an ambulance crew will be on duty near such centers, the statement said.

"The civil protection system must be ready for various scenarios, but this does not mean that we are now preparing for evacuation. To respond efficiently, we must have a plan for all possible scenarios," Tkachuk said.

Electricity and water have been temporarily cut off in the Russian-occupied city of Kherson in southern Ukraine, according to Ukrainian local officials and Russian-appointed local authorities.

It added that “three reinforced concrete columns of high-voltage power lines were damaged" after what it claimed was “a terrorist attack organized by the Ukrainian side.”

The Russian-backed Kherson region administration said that “power and water supply will be restored throughout the Kherson region in the very near future,” asking citizens to remain calm.

CNN cannot independently confirm or verify details of the claimed attack or who was behind it. Russia and Ukraine are accusing each other regarding the incident.

What Ukrainian officials are saying: Yuriy Sobolevskyi, a local Ukrainian leader, confirmed roughly 10 settlements of the Kherson region were left without electricity and water, including the whole city.

“A high-voltage power line was damaged. The occupiers have already 'reported' about the attack. However, they did not specify that the attack was carried out by them. Eyewitness testimonies confirm this,” Sobolevskyi said in a Telegram post.

More context: The fighting in the Kherson region has escalated in recent weeks. Russian-backed authorities have started evacuating residents, evacuations the Ukrainian side calls “forced."

Last month, a resident described the situation in the city as tense, with people “emotionally exhausted,” the streets empty from mid-afternoon onwards and Russian soldiers often seen in civilian clothes.

Already, more than 4.5 million residents are without power across Kyiv and six other regions because of Russian strikes, Zelensky said in his nightly address Sunday.

“We also understand that the terrorist state is concentrating forces and means for a possible repetition of mass attacks on our infrastructure. First of all, energy,” Zelensky said. “In particular, for this, Russia needs Iranian missiles,” the Ukrainian president said, adding Ukraine is “preparing to respond.”

He also said that on Sunday, Russians “used Iranian attack drones again,” but he stopped short of providing any further details.

“The whole world will know that the Iranian regime helps Russia prolong this war,” Zelensky said.

“If it was not for the Iranian supply of weapons to the aggressor, we would be closer to peace now,” he continued. “And this means closer to a complete solution to the food crisis.”

The shipment is being closely monitored because it would be the first instance of Iran sending advanced precision guided missiles to Russia, which could give the Kremlin a substantial boost on the battlefield.