An official in southern Ukraine on Friday warned residents to be wary of quickly returning to recently liberated territory.

“There are a lot of mines in the liberated territories and settlements,” Vitaliy Kim, head of the Mykolaiv regional military administration, said on Telegram.

Don't go there for no reason. There are casualties.”

Ukrainian forces on Thursday liberated Snihurivka, a town in the Mykolaiv region that lies on the main road to Russian-occupied Kherson city, in the neighboring Kherson region.

Some context: Officials in Kyiv have treated the announcement of Russia's retreat from Kherson with skepticism.

Kherson is one of four Ukrainian regions that Russia attempted to annex in violation of international law, and Kyiv doubts that Moscow is prepared to give up the territory.

“New attacks at the energy facilities happened overnight,” Serhiy Kovalenko, CEO at Yasno energy company, said in a statement on Facebook.
“Emergency power outages are being applied in Kyiv city in significant volumes today. We’re not going with the schedules.”

In the early hours of Friday morning, Russia struck the Vinnytsia region, that region’s leader said.

“Another critical infrastructure facility in the Vinnytsia region was hit again,” Serhiy Borzov said on Telegram.

Some context: In recent weeks, Russian attacks on critical infrastructure have left millions without water and electricity intermittently, including in the capital Kyiv.

The Ukrainian military on Friday said that Russian forces were mining roads and destroying critical infrastructure as they retreated in the Kherson region west of the Dnipro River.

“The Russian invaders continue their looting of settlements from which they are retreating,” spokesman for the General Staff of Ukraine’s Armed Forces Oleksandr Shtupun said on Friday.

“The enemy is also trying to damage power lines, other transport and critical infrastructure facilities of Kherson region," he said.

Shtupun said that Russian soldiers occupying the Kherson region had "booby-trapped roads and infrastructure elements with mines" in the villages of Tyahynka and Kozatske. He added that the "bombing of civilians" had been documented.

In the village of Zelenivka, on the outskirts of Kherson city, Russian forces “prohibited residents from moving at all throughout the settlement and are finishing a system of defensive borders,” Shtupun said.

They are setting up defense lines on the East bank, shelling our positions on the West bank. The enemy is constantly shelling the rear areas with civilians, keeping civilians in fear.”

At least two people were killed and two injured in a Russian strike on a five-story residential building in Mykolaiv overnight, a regional military chief said Friday morning.

Ukrainian President Volodymyr Zelensky said Friday the building was destroyed from the 5th to the 1st floor, and search and rescue operations are ongoing.

“The terrorist state's cynical response to our successes at the front,” Zelensky said on his Telegram channel.

We will not give up our struggle. The occupiers will be held to account for every crime against Ukraine and Ukrainians.”

Some context: Mykolaiv neighbors the Russian-occupied Kherson region but Ukraine’s military said it had retaken parts of the territory on Thursday after Moscow ordered a partial withdrawal from the area.

The Japanese Ministry of Foreign Affairs confirmed Friday that a Japanese man in his 20s has died fighting in Ukraine.

"The Embassy of Japan in Ukraine has confirmed to the Ukrainian authorities that a Japanese man in his 20s, who was participating in fighting against Russian forces in Ukraine, died on November 9. This was confirmed on November 10," the ministry's International Press Office said in a statement.

The Embassy of Japan in Ukraine said it is providing necessary support for the protection of Japanese citizens, and is contacting the man's family.

"We would like to refrain from giving any further details for the protection of personal information," it said.

Negotiations are ongoing between the US and Korean companies to export ammunition, in order to make up for the shortage of 155mm ammunition inventories in the US. This is being done under the premise that the US is the end user," the South Korean defense ministry said in a statement.

"The government policy of not providing lethal weapons to Ukraine has not changed.”

Some context: South Korea's statement comes after The Wall Street Journal reported, citing US officials familiar with the deal, that Seoul had agreed to sell weapons to the US that would be destined for Ukraine.

Ukraine’s military said it had retaken swathes of territory in Kherson on Thursday after Moscow ordered a partial withdrawal from the area, though officials in Kyiv warned that retreating Russian soldiers could turn the regional capital into a “city of death” on their way out.

A military spokesperson said that in just 24 hours, Ukrainian forces had pushed the front line in the key southern region of Kherson forward by 7 kilometers (4.3 miles) and taken control of more than 260 square kilometers of territory (100 square miles). Kyiv said it took control of the towns of Snihurivka and Kyselivka, both of which sit along key roads leading into Kherson city, the regional capital. Kyselivka is located about 15 kilometers (9 miles) away from Kherson city.

Moscow on Wednesday said its troops would withdraw from the west bank of the Dnipro River, an area that includes Kherson city, in one of the biggest military setbacks for Russia since its invasion began. A spokesperson for the Russian Defense Ministry said that effort began the following day.

Officials in Kyiv, however, have treated the announcement with skepticism. Kherson is one of four Ukrainian regions that Russia attempted to annex in violation of international law, and some doubt that Moscow would give up fighting for a territory filled with people that Russian President Vladimir Putin vowed would be Russian citizens “forever.”

Ukrainian officials are also concerned that the Russian military will embrace scorched-earth tactics and leave behind a trail of devastation in the wake of their withdrawal. Mykhailo Podolyak, an adviser to Ukrainian President Volodymyr Zelensky, alleged Thursday that Russia “wants to turn Kherson into a ‘city of death.’”

However, signs of the retreat have begun to emerge. Gen. Mark Milley, the chairman of the US Joint Chiefs of Staff, said Washington had seen the “beginnings” of a Russian withdrawal in Kherson. Satellite imagery taken last week of Russian-occupied Crimea showed trenches being dug near the border with Kherson, a possible sign that Russian military leaders are nervous about the progress of Ukraine’s counteroffensive. 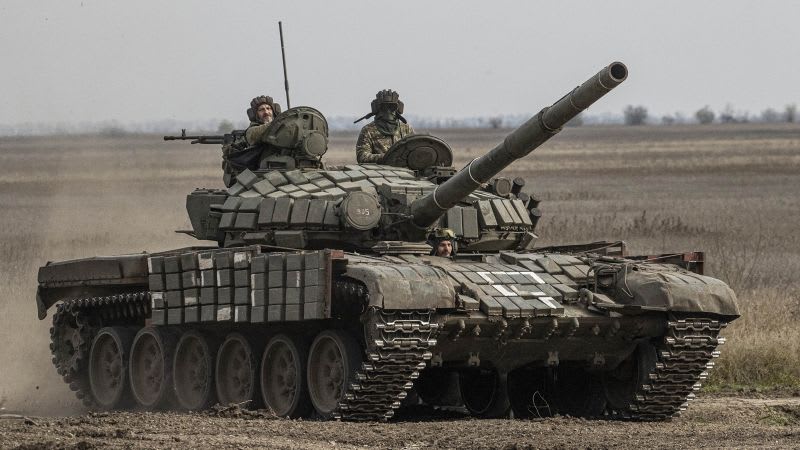 Ukrainian President Volodymyr Zelensky said more than 41 settlements in southern Ukraine have been liberated following the Russian decision to withdraw to the eastern side of the Dnipro river.

"Today we have good news from the south — the number of Ukrainian flags returning to their rightful place in the framework of the ongoing defense operation is already reaching dozens. Forty-one settlements have been liberated," Zelensky said.

Zelensky used his daily video address to congratulate several units involved in the advance through the southern Kherson region.

He added, "Everything that is happening now has been achieved through months of fierce struggle. Achieved by courage, pain and losses. It is not the enemy that is leaving. It is Ukrainians who are chasing the occupiers at great cost."

Zelensky said police units had moved into several settlements in Kherson, but the liberation of Ukrainian territory was just the first step in a long process.

The first and basic thing is de-mining. The occupiers leave behind thousands of mines and unexploded ammunition. I have often heard estimates that clearing Ukraine of Russian mines will take decades. We cannot wait that long," the Ukrainian president said.

"The invaders mine everything: power lines, business enterprises, fields, forests," he said. "At the peak of mine contamination in Ukraine, we had 300,000 square kilometers of life-threatening territory."

Now, he said, thanks to the efforts of sappers, "there are about 170,000 square kilometers left for de-mining. In particular, this is in the most difficult places – where the fighting is still ongoing, where the enemy will add more mines before its withdrawal, as it is now in Kherson."

Zelensky thanked the dozen countries assisting in de-mining. He also alluded to Ukraine's goals in the conflict.

"We have to go all the way — on the battlefield and in diplomacy — so that our flags, Ukrainian flags, and never again any enemy tricolors are on our entire land, within our internationally recognized border," he said.