Russian Deputy Foreign Minister Sergei Ryabkov said on Tuesday that there is "always a chance" for an exchange of prisoners with the United States, and he did not rule out the possibility of a prisoner swap before the end of the year, according to state media RIA Novosti.

“There is always a chance. Unfortunately, there were several situations before when it seemed that a decision in favor of this was about to take place. This did not happen. But I'm just talking about previous experiences — we, as a department, do not conduct such dialogue, so we do not fully feel the dynamics," Ryabkov said, as quoted by RIA.

“I would like to note that if this happened, it would undoubtedly, send a positive signal that not everything is hopeless in Russian-American relations," he added, according to RIA.

Some background: In July, CNN reported that the Biden administration offered to exchange a convicted arms trafficker Viktor Bout as part of a potential deal to secure the release of two Americans held by Russia, basketball star Brittney Griner and Paul Whelan. But Russian officials have requested that Vadim Krasikov, a former colonel from the country’s domestic spy agency, be included in the US’ proposed swap of Bout for Griner and Whelan, multiple sources familiar with the discussions have previously told CNN.

Earlier this month, Ryabkov said that Russia hoped for a “positive outcome” on the issue of exchanging Bout, according to state media TASS.The possibility of a prisoner swap is not only possible but is getting stronger, he said, adding that “and the time will come when the prospect will become a concrete agreement,” according to TASS.

However, the US State Department has cautioned against optimism based on Ryabkov’s comments, noting that Russia still has yet to engage in good faith. “Ultimately here, actions speak louder than words,” said State Department principal deputy spokesperson Vedant Patel.

Moscow had "no choice" but to postpone the meeting on the START nuclear arms reduction treaty in Cairo, Russian Deputy Foreign Minister Sergei Ryabkov told Russian journalists on Tuesday, according to state media TASS.

"The situation developed in such a way that we had no other choice. The decision was made at the political level," Ryabkov told journalists, as quoted by TASS.

"We were faced with a situation where our American colleagues in a number of areas demonstrated not just an unwillingness to perceive our signals and take into account our priorities but acted in the opposite direction," Ryabkov said. "Of course, there is an effect of what is happening in Ukraine and around it."

According to Ryabkov, the United States tried to concentrate on the topic of inspections, while for Moscow, "the priority was and remains the solution of other issues." Ryabkov said Moscow will offer Washington new dates for a meeting on the START treaty, but it is "unlikely" that it will take place before the end of the year.

“The major issues that dominate our agenda with the United States today are more important than some technique and mechanics of work under the new START,” Ryabkov added.

NATO is "not running out" of tanks, Lithuania's Foreign Minister Gabrielius Landsbergis said, refuting claims that the alliance is low on stock.

"Everything that we have needs to be shipped right away," he said.

"NATO is not running low on tanks, neither on tank ammunitions," the foreign minister added.

Acknowledging that there may be "difficulties" with the supply of other ammunition, Landsbergis said that NATO countries "basically have almost unlimited amount of ammunition for main battle tanks."

Relentless Russian airstrikes have sapped much of Ukraine's heat and power supply, with freezing temperatures and less daylight compounding the hardship for people.

Meanwhile, Moscow has said it will start installing federal courts in four regions of Ukraine that it annexed in violation of international law. 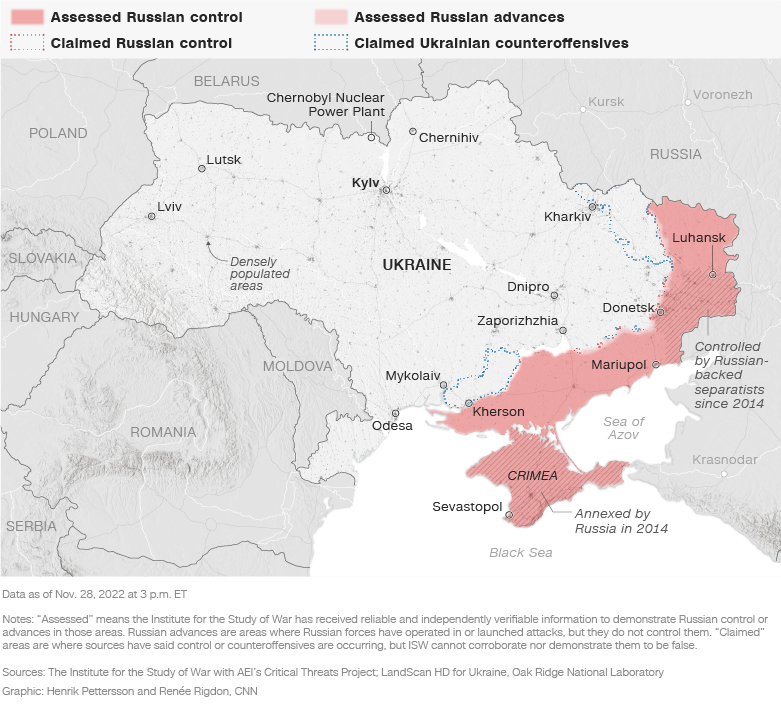 The head of the notorious private military company Wagner, Yevgeny Prigozhin, confirmed that a Zambian national killed on Sept. 22 died fighting for Wagner in Ukraine. Prigozhin also confirmed that the Zambian was recruited out of a Russian prison.

Prigozhin, known by the moniker “Putin’s chef,” confirmed the name of the Zambian was Nathan Lemekhani Nyirenda.

Via a Telegram account where his responses to journalists are posted, Prigozhin said that he met Nyirenda on his recruitment drive across Russia’s prisons. The two allegedly met in a prison in Tver, Russia.

Prigozhin said he recalled an alleged exchange that he had with Nyirenda in which he asked about his motivation for fighting in the war.

CNN has previously reported about the death, age, prison and circumstances of Nyirenda in November.

A statement from the Zambian Foreign Ministry said that he was a 23-year-old student who was studying in Russia at the Moscow Engineering Physics Institute and that he had been arrested in April 2020 and sentenced to 9 years and 6 months in prison in Tver.

At the end of Prigozhin’s statement on Telegram, he described Nyirenda as “showing courage, bravery and he died as a hero.”

France has dispatched 100 generators to Romania for onward transport to Ukraine, the French embassy in Romania tweeted on Tuesday.

The 100 units will be handed over to Ukraine "very soon," the embassy tweeted.

The European Union has sent 500 generators to Ukraine, from 17 EU countries, EU Civil Protection & Humanitarian Aid — the bloc’s humanitarian arm — said on Twitter. These range from small generators suitable for running small households to much more powerful ones with higher capacities.

France’s delivery is part of these 500 units, the ministry confirmed to CNN and follows 85 such generators that France has already sent to Ukraine and Moldova.

"Given the immense energy needs in Ukraine, much more equipment is needed," EU Civil Protection & Humanitarian Aid said on Twitter.

Millions of Ukrainians have been left with reduced access to heat and power this winter, following a recent barrage of Russian strikes targeting critical energy infrastructure.

Kremlin spokesperson Dmitry Peskov said Tuesday that "political will" is required to resume negotiations with Kyiv, but that in the current climate, negotiations with Ukraine are "impossible because the Ukrainian side denies them."

Asked what is required to resume them, he said, "it has to be political will and readiness to discuss those demands of Russia that are well known [in Kyiv]."

Peskov made the comments during a regular call with journalists.

Some context: Moscow has been consistently accusing Kyiv of withdrawing from negotiations. When asked Monday about the possibility the Vatican could mediate in Russia-Ukraine negotiations — which the Vatican has repeatedly offered — Peskov said they welcomed such initiatives, but added that platforms for negotiations are "not currently in demand" from the Ukrainian side.

Ukrainian President Volodymyr Zelensky signed a decree in early October formally ruling out the possibility of negotiations with Russian President Vladimir Putin in response to Russia's annexation of four Ukrainian regions, which is illegal under international law.

But speaking to CNN in mid-November, Zelensky said he did not rule out peace negotiations with the Russian president in Moscow. Zelensky had previously offered numerous times to sit down to talk with Putin and Russian officials during the beginning of the war.

Russian President Vladimir Putin is "failing in Ukraine" amid Kyiv's successes on the battlefield, according to NATO Secretary General Jens Stoltenberg.

Stoltenberg said Putin was "trying to use winter as a weapon of war," as Russia's spate of strikes on Ukrainian critical infrastructure have left millions of civilians without electricity, water and central heating.

He added that he expected the message from the foreign ministers to be that allies "need to do more," including providing Ukraine with more air defense systems and ammunition.

Asked whether Ukraine could expect to see further attacks from Russia, Stoltenberg said more attacks could be expected because: "Russia is failing on the battlefield."

Ukraine’s success in pushing Russian forces out of territories around Kyiv and Kharkiv, as well as the liberation of Kherson city, was "a sign of weakness," he added.

Stoltenberg said Russia was running out of ammunition, evidenced by its reaching out to Iran for more.

"Iran and no other country should provide Russia with missiles, drones or anything else,” he warned.

When asked about the possibility of Ukraine joining NATO, Stoltenberg said he anticipated the foreign ministers' meeting would "reiterate that NATO’s door is open."

Some 51 Ukrainian paintings that secretly left Kyiv earlier this month, just hours before a massive Russian missile attack on the capital, began an exhibition at a leading museum in Spain on Tuesday.

"The exhibition ‘In the Eye of the Storm: Modernism in Ukraine, 1900–1930s,’ presents ground-breaking art produced in Ukraine in the first decades of the 20th century," the Thyssen-Bornemisza National Museum in Madrid said in a statement.

The works, on loan from the National Art Museum of Ukraine and other museums in the country, "were packed in secrecy" onto trucks and left Kyiv on November 15, said a statement from Museums for Ukraine, a group of museums which collaborate to help protect Ukraine’s cultural heritage.

The trucks "faced a treacherous journey as they passed through areas of unexpected heavy missile fire" heading west, past the city of Lviv and finally across the Polish border, the statement added.

The convoy carrying the art reached Madrid on November 20 and went to the Thyssen museum, whose board member, Francesca Thyssen-Bornemisza, founded Museums for Ukraine in March, shortly after Russia’s invasion of Ukraine.

"It is becoming clearer day by day that (Russian President Vladimir) Putin’s war against Ukraine is not only about stealing territory, but it is also about controlling the nation’s narrative and its cultural heritage," Francesca Thyssen-Bornemisza said.

"This exhibition aims to recover the history of modernism in Ukraine. As we watch history repeat itself, this exhibition is a powerful reminder of how close we are to another disaster," she said.

"This exhibition is the most comprehensive survey of Ukrainian avant-garde art in a major European museum to date," the Museums for Ukraine added.

In addition to the 51 paintings that left Ukraine in the convoy, the exhibition includes about 18 other Ukrainian works, from sketches and collages to theater designs, including from private collectors, museum organizers said.

The exhibit will be shown in Madrid through to April 30, before heading to the Museum Ludwig in Cologne, Germany. Further venues are to be decided after that.