This weekend brought a fresh round of Russian attacks near the front lines in both southern and eastern Ukraine.

The map below shows the territories currently controlled by Moscow or Kyiv's forces: 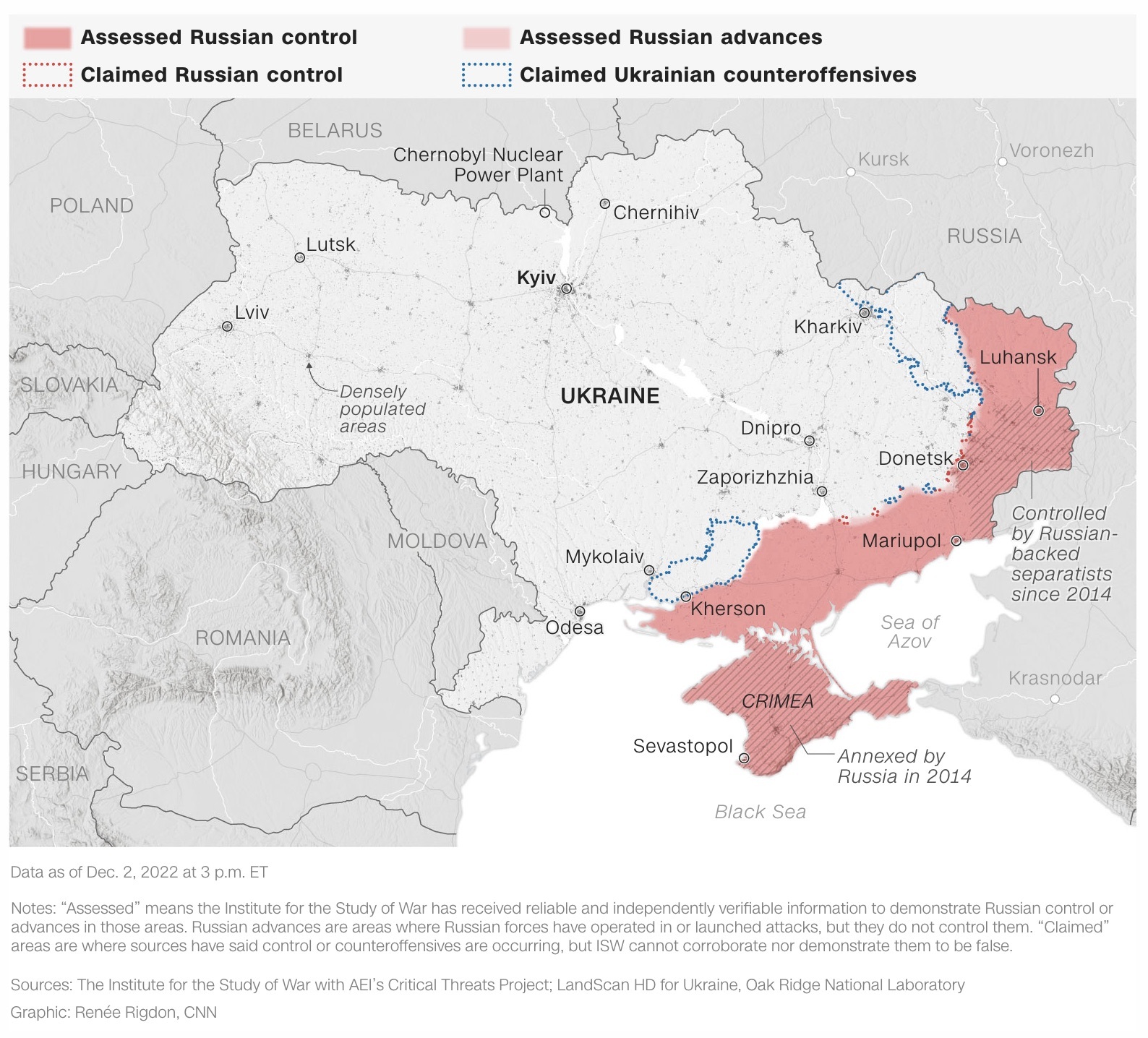 Nine “Grain from Ukraine" ships with a combined 336,000 tons of agricultural products have left Odesa ports in the past two days, the Ukrainian Ministry of Infrastructure reported Sunday.

The program is a humanitarian initiative, with Ukraine planning to send over 60 ships of critically needed food products to Ethiopia, Sudan, South Sudan, Somalia, Congo, Kenya and Yemen.

“In the past two days, the ports of Greater Odesa sent 9 ships with 336,000 tons of agricultural products to the countries of Africa, Asia and Europe. Since the beginning of the implementation of the 'grain initiative,' the world has received 13 million tons of Ukrainian food," the Infrastructure Ministry wrote in a Facebook statement.

CNN previously reported that the first vessel from the humanitarian program, carrying about 25,000 tons of Ukrainian wheat, arrived at the port of Doraleh in Djibouti Saturday, en route to Ethiopia.

"I want to emphasize that our position is unchanged, Russian President Vladimir Putin spoke about this, and the government has repeatedly said that we believe that this instrument is non-market, inefficient, grossly interfering in the market, contrary to all the rules and the same WTO," Novak said, as quoted by RIA Novosti.

"We will sell oil and oil products to those countries that will work with us on market terms, even if we have to somewhat reduce production," he added.

Novak also said that Moscow is working on the mechanisms that would prohibit the use of price cap instrument.

More context: On Friday, G7 nations and Australia agreed on a $60 per barrel price cap on Russian oil.

The West’s biggest economies agreed earlier this year to establish a price cap after lobbying by the United States, and vowed to hash out the details by early December. But setting a number had proved difficult.

Capping the price of Russian oil between $65 and $70 a barrel, a range previously under discussion, wouldn’t have caused much pain for the Kremlin. Urals crude, Russia’s benchmark, has already been trading within or close to that range. EU countries such as Poland and Estonia had pushed for the cap to be lower.

A price of $60 represents a discount of almost $27 to Brent crude, the global benchmark. Urals has been trading at discounts of around $23 in recent days. Reuters reported that the EU agreement included a mechanism to adjust the level of the cap to ensure it was always 5% below the market rate.

The risk of settling on a lower price is that Russia could retaliate by slashing its output, which would roil markets. Russia previously warned that it will stop supplying countries that adhere to the cap.

Kherson city's power supply is back to 85% across town, according to local officials.

That marks a significant improvement in the southern city over recent days.

After being restored to roughly three-quarters capacity Friday, the city had been cut off from electricity entirely by Russian shelling.

By Saturday, power was restored to 75% in the city, and then Sunday marked another improvement.

Seventy percent of residents now have water supplied in their homes, Yanushevych wrote on Telegram.

The city’s pumping station had been without power due to the Russian strikes that knocked energy grids offline.

OPEC and its allies decided Sunday to stick with their existing policy of curtailing oil output, just hours before new Western sanctions on Russian crude exports come into force.

The Organization of the Petroleum Exporting Countries, and other major oil producers including Russia, said they would continue to restrict supply by 2 million barrels per day, a policy set in October that started last month and is due to run through the end of 2023.

In a statement, OPEC said Sunday’s meeting — held via video conference — had reaffirmed the decision taken in October, adding that the group was ready to meet at any time to “address market developments if necessary.”

The cuts agreed to in October, the biggest since the start of the pandemic, drew criticism from the United States. The Biden administration called them “shortsighted” and said they would hurt low- and middle-income countries by pushing energy prices higher.

Since then, oil prices have instead pulled back, as traders have focused on how ongoing coronavirus lockdowns in China and global recession fears could hit demand.

Markets could be volatile in the coming days, however. Europe’s ban on importing oil from Russia shipped by sea kicks in on Monday, injecting extra uncertainty into the outlook for energy supply.

G7 nations, the European Union and Australia agreed Friday to impose a price cap of $60 a barrel on Russian oil shipped to other countries that have not adopted an embargo. The move, which also takes effect Monday, is aimed at depriving the Kremlin of revenue while avoiding a price shock by keeping Russian oil flowing to some markets.

Moscow has previously threatened to retaliate by cutting off oil supply to countries that adhere to the price cap.

What Ukraine is saying: Ukrainian President Volodymyr Zelensky called the decision to set the price cap at $60 a “weak position.”

“The logic is obvious: if the price limit for Russian oil is $60 instead of, for example, $30, which Poland and the Baltic countries talked about, then the Russian budget will receive about a hundred billion dollars a year,” Zelensky said in his nightly address on Saturday. “This money will go not only to the war and not only to Russia’s further sponsoring of other terrorist regimes and organizations.”

The eastern town of Bakhmut has become a prime target for Russian troops, a Ukrainian military official said Sunday.

Serhii Cherevatyi, spokesman for the Eastern Group of the nation's armed forces, said Ukrainian troops were holding out in Bakhmut, describing the situation as “very difficult, but under control.”

Russian units appeared to make some progress in the town a few days ago, though they also looked to be taking heavy casualties.

“Bakhmut has become a target number one for the occupation army in order to break through our defense, to reach the direction of Pokrovsk, Sloviansk, Kramatorsk … to demonstrate at least some success of their units directly on the battlefield,” Cherevatyi said.

That included attacks on private apartment buildings and other civilian infrastructure, according to Yanushevych.

One civilian in Kherson was killed and two were injured Saturday, he said.

Ukrainian officials say that Russia left numerous mines, tripwires and other dangerous objects throughout the Kherson region, with the National Police reporting that they have seized 4,200 explosive devices and destroyed another 1,250.

In the city of Kherson, crews have restored electricity supply, with about 75% of the community gaining access to power as of Sunday morning, according to the regional military administration.

CNN's Tim Lister and Julia Kesaieva contributed to this report.

The first vessel from the humanitarian program "Grain from Ukraine" delivered 25,000 tons of Ukrainian wheat bound for Ethiopia on Saturday, according to a statement from President Volodymyr Zelensky's office.

The statement said that, as part of the initiative, Ukraine plans to send over 60 more ships to Ethiopia, Sudan, South Sudan, Somalia, Congo, Kenya and Yemen.

The first ship arrived at the port of Doraleh in Djibouti on Saturday, en route for landlocked Ethiopia.

A second vessel, which crews have finished loading in the Ukrainian port of Chornomorsk, will head toward Ethiopia next week with 30,000 tons of wheat on board.

Some background: Experts warned over the summer that millions of people had been pushed into hunger as a Russian blockade fueled soaring grain commodity prices.

Those prices reached record highs this year as more than 20 million metric tons of Ukrainian wheat and corn remained trapped in Odesa.

Grain shipments can now leave Ukraine under an uneasy agreement brokered by Turkey and the United Nations, but the belated shipments are no quick fix.

The global food shortage has been accelerated by years of pandemic-related disruptions, the climate crisis, conflict, food export restrictions and spiraling costs, and the effects will take significant time to address.

The attacks damaged buildings but no one was reportedly killed or wounded.

Oleksandr Starukh, head of the Zaporizhzhia regional military administration, said several strikes were reported in a village there.

While the strikes caused no casualties, they did break windows and damage roofs on homes, and power lines were damaged, according to Starukh.

In the nearby Dnipropetrovsk region, officials reported shelling near the town of Nikopol, said Valentyn Reznichenko, the head of the region's military administration.

"Russians shelled peaceful towns and villages 10 times with 'Grad' and heavy artillery," he said, adding that no one was injured.

In one community, homes, garages and power lines were damaged, he said. The scenes of shelling in other areas are being inspected and the details of the attacks are being clarified, he added.