The US has secured the release of WNBA star Brittney Griner, a US official told CNN. She is now in the custody of US officials.

The swap did not include another American that the State Department has declared wrongfully detailed, Paul Whelan.

Both the families of Griner Whelan have been informed of her release, according to a source familiar.

US President Joe Biden is expected to make remarks soon.

Ukraine's defense minister has said that the army has significantly streamlined its protocol for approving unmanned aerial vehicles (UAVs) and other weaponry, a revelation that comes days after Moscow accused Kyiv of drone strikes on air bases deep inside its territory.

“The procedures for admission of weapons and military equipment to operate in the Armed Forces were significantly simplified. This has already had a significant effect, primarily in the field of UAVs," Oleksii Reznikov said.

Reznikov explained that the previous process to approve one or two drones could take up to two years. In comparison, a new system has allowed seven Ukrainian-made UAVs to be green-lit for operation in the Ukrainian armed forces over the past 30 days.

He added there are 19 pending applications for UAVs.

Some background: Russia unleashed a fresh wave of missiles towards Ukraine earlier this week, as it accused Kyiv of striking military airfields inside Russia -- raising the stakes for Moscow at a time when its war on Ukraine is faltering. Russia has said that Ukrainian drones carried out three strikes on its bases, yet two of the targets are hundreds of miles inside Russian territory and beyond the reach of Ukraine’s declared drone arsenal.

On Thursday, Sevastopol's Russian-appointed governor Mikhail Razvozhaev said that Russia's Black Sea Fleet had shot down an unmanned aerial vehicle off the Crimean Peninsula. The Kremlin said Crimea and Sevastopol faced the risk "terrorist attacks" from Ukraine, but said the region is ready to repel them.

WNBA star Brittney Griner has been released from Russian detention in a prisoner swap for convicted Russian arms dealer Viktor Bout, according to a source familiar

Bout, nicknamed the “Merchant of Death” is a former Soviet military officer serving a 25-year prison sentence in the United States on charges of conspiring to kill Americans, acquire and export anti-aircraft missiles, and provide material support to a terrorist organization. Moscow had slammed his sentencing in 2012 as “baseless and biased” and Bout has maintained he is innocent.

Griner — who had for years played in the off-season for a Russian women’s basketball team, had been detained since February, when she was arrested on drug smuggling charges at an airport in the Moscow region. Despite her testimony that she had inadvertently packed the cannabis oil found in her luggage, she was sentenced to nine years in prison in early August and was moved to a penal colony in Mordovia in mid-November after losing her appeal.

The swap did not include another American that the State Department has declared wrongfully detailed, Paul Whelan.

He is a US, Irish, British and Canadian citizen — was detained at a Moscow hotel in December 2018 by Russian authorities who alleged he was involved in an intelligence operation. He was sentenced to 16 years in prison on espionage charges he has vehemently denied. Whelan had been carrying out his sentence at a labor camp in Mordovia, an eight-hour drive from Moscow, where he told CNN in June 2021 he spent his days working in a clothing factory that he called a "sweatshop."

US basketball star Brittney Griner's freedom ultimately hinged on the release of a convicted Russian arms dealer, nicknamed the “Merchant of Death” by his accusers, whose life story inspired a Hollywood film.

Viktor Bout, a former Soviet military officer, is currently serving a 25-year prison sentence in the United States on charges of conspiring to kill Americans, acquire and export anti-aircraft missiles, and provide material support to a terrorist organization. Bout has maintained he is innocent.

The Kremlin has long called for his release, slamming his sentencing in 2012 as "baseless and biased."

The Russian businessman who speaks six languages eluded international arrest warrants and asset freezes for years. He was arrested in a sting operation in 2008 led by US drug enforcement agents in Thailand posing as the Revolutionary Armed Forces of Colombia, known by the acronym FARC. He was eventually extradited to the US in 2010 after a protracted court proceeding.

"Viktor Bout has been international arms trafficking enemy number one for many years, arming some of the most violent conflicts around the globe,” said Preet Bharara, the US attorney in Manhattan when Bout was sentenced in New York in 2012.

“He was finally brought to justice in an American court for agreeing to provide a staggering number of military-grade weapons to an avowed terrorist organization committed to killing Americans.”

The trial honed in on Bout's role in supplying weapons to FARC, a guerrilla group that waged an insurgency in Colombia until 2016. The US said the weapons were intended to kill US citizens.

But Bout's history in the arms trade extended much further afield. He has been accused of assembling a fleet of cargo planes to traffic military-grade weapons to conflict zones around the world since the 1990s, fueling bloody conflicts from Liberia to Sierra Leone and Afghanistan. Allegations of trafficking activities in Liberia prompted US authorities to freeze his American assets in 2004 and blocked any US transactions.

Bout has repeatedly maintained that he operated legitimate businesses and acted as a mere logistics provider. He is believed to be in his 50s, with his age in dispute because of different passports and documents. 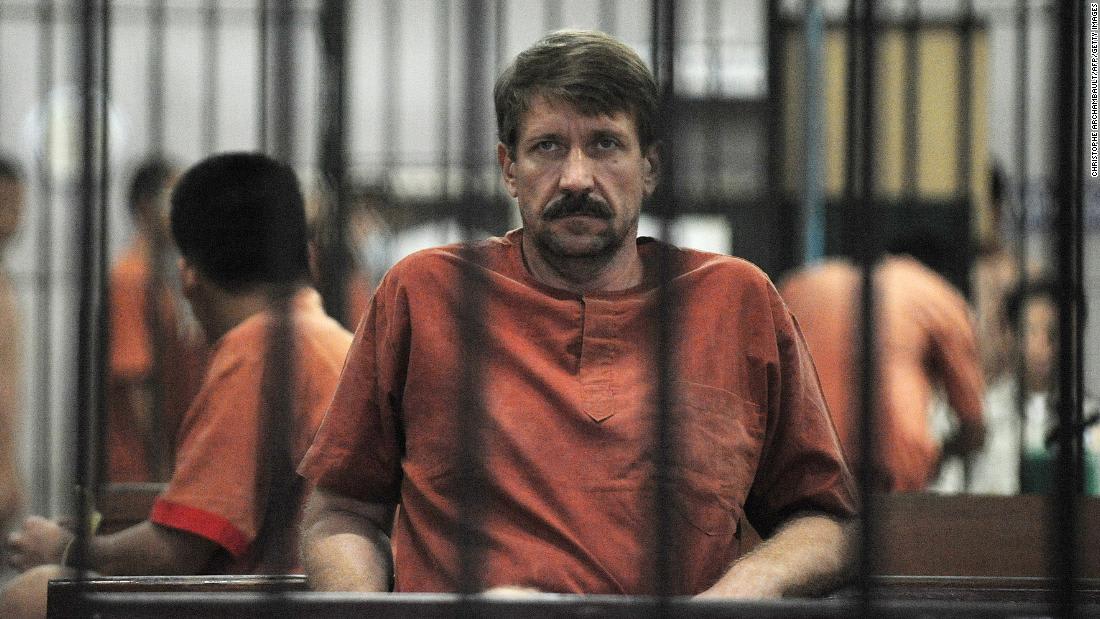 Russia accused Ukrainian forces of shelling the western city of Belgorod and said its Black Sea Fleet had downed a drone over the occupied Crimean Peninsula on Thursday, suggesting that Kyiv is keeping up its efforts to hit back against Moscow far beyond the front lines of the war.

A loud explosion rang out over the strategic, Russian-occupied port city of Sevastopol on Thursday and Russia said it had intercepted a drone, indicating that Kyiv is keeping up its efforts to hit back against Moscow beyond the front lines of the war.

The city's Russian-appointed governor Mikhail Razvozhaev said on Telegram that Russia's Black Sea Fleet had shot down an unmanned aerial vehicle over the sea. "Our military, as always, worked well," he added.

The Black Sea Fleet is headquartered in Sevastopol, on the Crimean peninsula, which Russia illegally annexed from Ukraine in 2014. Throughout the war, Moscow has used the ships to launch cruise missiles against Ukraine's civilian infrastructure, including repeated assaults on its power grid.

Dmitry Peskov, the Kremlin's spokesman, told reporters on Thursday that Crimea and Sevastopol faced the risk of attacks, but that the region was ready to repel them. “Risks certainly exist, because the Ukrainian side continues its line of organizing terrorist attacks,” Peskov said, adding that "effective measures are being taken to counter (them)."

Peskov's comments came several days after the Russian Defense Ministry accused Ukraine of using drones to carry out three strikes on Russian military air bases, yet two of the targets are hundreds of miles inside Russian territory and beyond the reach of Ukraine’s declared drone arsenal.

Two residents of Sevastopol were also detained Thursday on suspicion of treason by means of sharing information with Ukraine’s Security Service, according to Russia's Federal Security Service (FSB) press service, which claimed that they shared the “location of facilities of the Ministry of Defence of the Russian Federation for a fee" with Kyiv. Criminal proceedings have begun against the two suspects, who are facing charges of “high treason," the FSB said.

Winter weather conditions and ongoing fighting are hindering repairs to Ukraine's power grid, as technicians race to get energy infrastructure damaged in weeks of relentless Russian strikes back up and running.

Ukrainian state energy agency, Ukrenergo, said Thursday there was a "significant shortage of electricity in the system," adding that consumption limits had been exceeded and emergency outages introduced in several regions. The outages come as temperatures are plummeting below freezing across the country.

“Frost, rain with snow and strong wind in many regions in the west of the country cause icing of wires and their damage," Ukrenergo said.

But the worst challenges are in the east of the country, where access to the sites are complicated by continued shelling and artillery fire.

“In the evening the enemy again hit several areas with massive artillery fire. The power grids are being inspected, where the situation allows. Repair work will begin after receiving access from the military," the agency added.

Emergency repairs are ongoing in Kyiv and Odessa.

Some background: Russia unleashed yet another wave of drone and missile attacks across Ukraine on Monday, targeting the country's energy infrastructure. Ukraine has been facing a wide-scale assault on critical infrastructure and power sources since early October, as part of Moscow's weaponization of winter. Ukrainian President Volodymyr Zelensky said the strikes on Monday caused extensive power outages in several regions, including Kyiv and Odesa.

The impact: Ukraine’s health ministry on Tuesday announced the suspension of planned surgeries in an effort to insulate the medical system from the impacts of rolling power outages. "They will be carried out when the situation around the supply of electricity stabilizes…all emergency medical care will be provided to patients in full," the statement said.

Ukrainian forces have shelled the western Russian city of Belgorod, according to the region's governor Vyacheslav Gladkov.

Gladkov said on Telegram Thursday that the city, located about 35 kilometers (21 miles) from the Ukrainian border, had sustained damage to a power line caused by “shell fragment.”

Preliminary indications show there are no civilian casualties, he said.

Some context: It's not the first time Belgorod has been targeted, according to the governor. On Nov. 15, he claimed two people had been killed in the city by Ukrainian shelling.

The alleged shelling of Belgorod comes after Russia accused Kyiv of using drones to strike military airfields far inside its territory on Monday and Tuesday — an extraordinary breach of Moscow’s assumptions that it can protect its deep interior.

Nearly 10 months after his invasion of Ukraine began, Russian President Vladimir Putin on Wednesday acknowledged that the conflict is “going to take a while,” as he also warned of the “increasing” threat of nuclear war.

Speaking at a meeting of Russia’s Human Rights Council at the Kremlin, Putin said Moscow will fight by “all available means at our disposal,” in what he insists on calling a “special military operation,” but also said he saw no immediate need to mobilize more troops.

“With regard to the protracted nature of the special military operation and its results, of course, it’s going to take a while, perhaps,” he said.

And without categorically ruling out the first use of nuclear weapons, Putin said he viewed the Russian nuclear arsenal as a deterrent rather than a provocation.

“As for the idea that Russia wouldn’t use such weapons first under any circumstances, then it means we wouldn’t be able to be the second to use them either – because the possibility to do so in case of an attack on our territory would be very limited,” he said.
“Nevertheless, we have a strategy… namely, as a defense, we consider weapons of mass destruction, nuclear weapons – it is all based around the so-called retaliatory strike,” he said. “That is, when we are struck, we strike in response.”