The Group of Seven leaders pledged on Monday to give “unwavering support" and solidarity to Ukraine by promising assistance with military and air defense systems.

US President Joe Biden was one of the G7 who held a virtual meeting with Ukrainian President Volodymyr Zelensky.

Here are the latest headlines 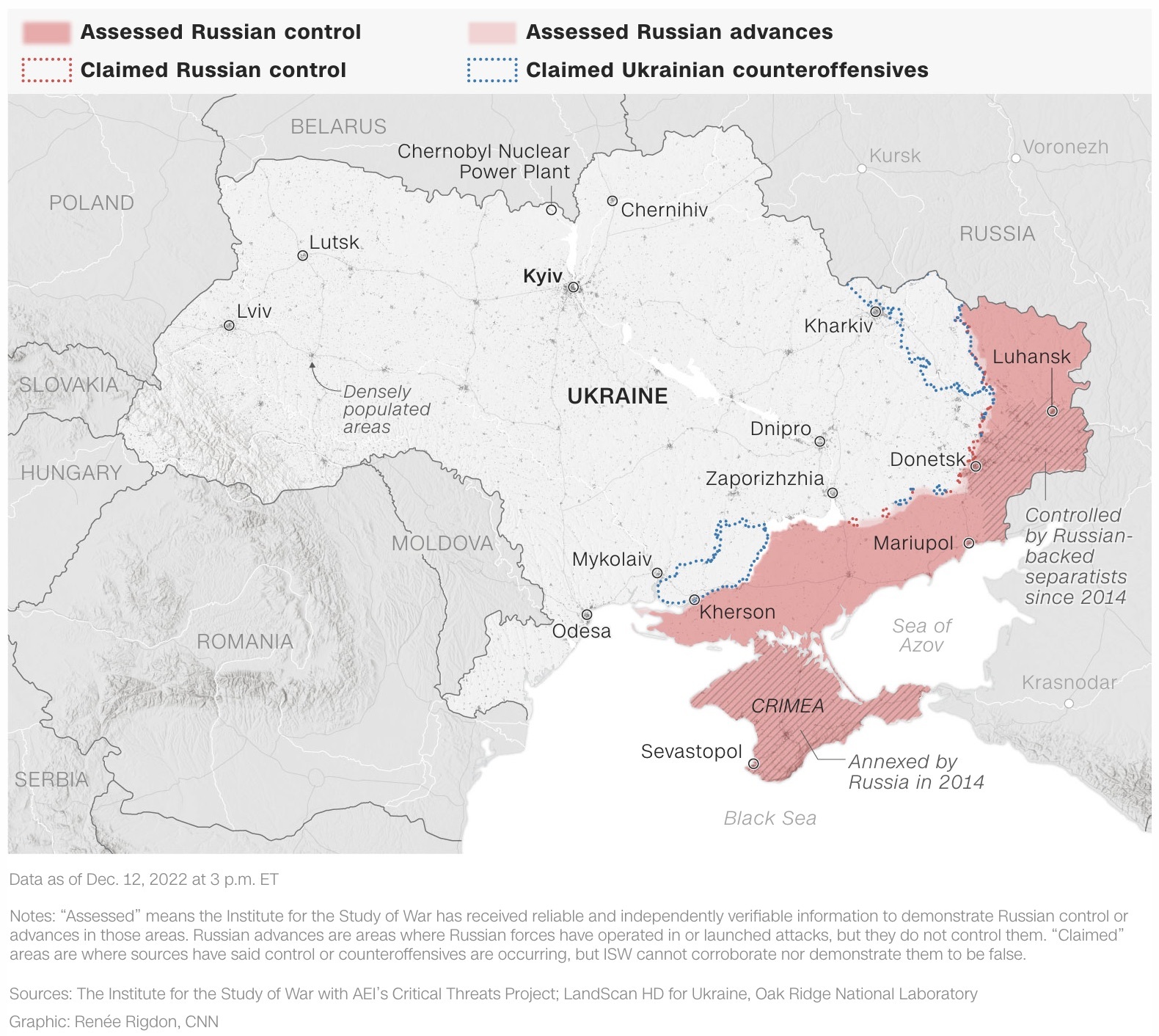 WNBA star Brittney Griner experienced a taste of normal on her first weekend back in San Antonio after spending 10 months in detention in Russia.

After receiving medical care at Joint Base San Antonio-Fort Sam Houston, Griner and her wife Cherelle moved to a more residential environment, one that has been decorated for Christmas by her agent Lindsay Kagawa Colas.

Colas told CNN that Griner is “upbeat, thankful and hopeful” after returning home on Friday. For Griner, "normal" has meant indulging in her favorites: her first drink after landing was a Dr Pepper soda.

This weekend, as members of her family visited off and on for hours, they brought some real San Antonio barbecue for her to enjoy. She received new glasses and was eating far more nutritious food and supplements compared with her time in detention.

While in San Antonio, Griner will be receiving physical and psychological support from the US government in an effort to aid her reentry. That care is heavily focused on helping former captives regain a sense of control over their lives after lengthy detentions.

“She’s had a lot of psychological support,” Colas said. “The resources are very robust. It’s very supportive and very BG-centered. It’s about her developing agency.”

Griner had been charged and convicted in a Russian court of drug trafficking after admitting to having a small amount of marijuana in her bag while returning to the country in February to play professional basketball. She was serving a 9-year sentence in a Russian penal colony until she was released in a prisoner swap for convicted arms trafficker Viktor Bout.

Griner has opted into the Department of Defense’s PISA program (Post Isolation Support Activities), which other wrongfully detained Americans, including Trevor Reed, have participated in, Colas added.

Moving forward: Griner is eager to use power and influence to help others. Especially another American left behind in Russia, Paul Whelan.

“It was one of the first things she asked me about,” Colas said. “She’s very, very concerned about that. And will be sending a message to Paul.”

Whelan also sent a message through US representatives who spoke with him in recent days: “Please tell Brittney that Paul said he’s happy she’s home," he told her, according to Colas.

“She is absolutely thinking about the future,” Colas said. “She already talking about the position that she’s now in to help other people come home.”

The White House remains “bound and determined to ensure that we work through a successful method of securing Paul Whelan's release at the earliest possible opportunity,” National Security Adviser Jake Sullivan said Monday, even as he acknowledged that, over the last several months, it’s become apparent, “what Russia was asking for to secure Paul Whelan's release was not something that we had to be able to give.”

“That is a problem we are trying to solve – we have various ways that we are working through solutions, and we will be endeavoring on a daily basis, from the President on down, to finally develop a formula that works,” Sullivan told reporters during Monday’s White House press briefing, citing “the sensitivity of these issues.”

“And that's as far as I can go today, but I will just reinforce that our commitment to this is absolutely rock solid, intense, and this is as high a priority as the President has,” he added.

Sullivan later told CNN’s Phil Mattingly that administration officials “will have an engagement with [the Russian federation] this week,” to address Whelan’s case, but “I won't say more about it, because we're trying to keep that in sensitive channels, but that's the timetable, and we have had regular engagement, of course, along the way and the next conversation at a high level will take place this week.”

But he dismissed the idea that the US would change a specific policy, including with respect to Ukraine, in exchange for Whelan’s release.

He confirmed that members of the National Security Council and the State Department met Monday with Whelan’s sister, Elizabeth Whelan, virtually, but told reporters that he wasn’t a part of the meeting.

“I did participate in the conversation the President had with Elizabeth a few days ago, where they too were brainstorming and talking through ideas about how to go forward-- you'll understand that I can't get into the specifics of the kinds of things that we are contemplating to try to ensure that we get Paul home as soon as we can,” Sullivan said.

“I will just say that the conversations with Paul Whelan's family have been substantive, they have had a number of very good questions, and also a number of suggestions that they've put forward and we have been working to figure out what it is going to take to ultimately secure his freedom and how we can go about getting that and being able to sit down with the Russians and work out a deal,” he added.

WNBA star Brittney Griner played basketball over the weekend for the first time in nearly 10 months after being freed from Russian detention, her agent told CNN.

Griner was wearing a pair of black Chuck Taylor sneakers, Phoenix Suns shorts, and a T-shirt touting Title IX as she played. And her first act was to dunk, said agent Lindsay Kagawa Colas.

But despite the light workout, the two-time Olympic gold medalist isn't ready to say when or if she plans to return to her WNBA career with the Phoenix Mercury. Colas believes that she will try to “utilize her fame for good” but did not detail what that would look like.

Cherelle Griner, Griner’s wife, flew into San Antonio last week and they have been staying at the US base, spending time with family and deciding what to do with her freedom, said Colas. Griner was visited by her father, Ray, and some other family members on Saturday.

ESPN first reported on Griner’s activities over the weekend.

The 32-year-old arrived at Brooke Army Medical Center in San Antonio for routine evaluation after her release Thursday from what US officials deemed wrongful detention. She was freed amid Russia’s war in Ukraine in a prisoner swap for notorious convicted Russian arms dealer Viktor Bout.

US State Department spokesperson Ned Price said Monday that “the course of treatment” for returned American detainees, including Brittney Griner, “is not a preset, prescribed set of steps.”

“It is a conversation that experts will have with Brittney, with Cherelle, with other members and interested parties, to determine what's in her best interest. And so whether that course of treatment lasts days or longer, that is not a question for us. That is up to Brittany Griner,” Price said at a department briefing.

Many of the Americans who have recently been freed from wrongful detention underwent a Department of Defense Program known as PISA (Post Isolation Support Activities) to help them acclimate back to normal life. The length of that program varies but its maximum is 19 days.

Price said that the State Department would not be in a position to offer many updates going forward. Griner has been at Brooke Army Medical Center, located on Joint Base San Antonio-Fort Sam Houston, since her return to the United States after nearly 10 months in Russian detention.

Ukrainian President Volodymyr Zelensky asked the Group of Seven leaders Monday to maintain its support for Ukraine next year while outlining three steps for securing peace.

“Russia still has the advantage in artillery and missiles, this is a fact,” Zelensky said in his statement. “Ukraine needs modern tanks — and I ask you to provide this defensive capability to us. It can be done right now.”

“The more effective we are with such weapons, the shorter the Russian aggression will be,” he said.

Support for financial and energy stability: The second step, according to Zelensky, was for the leaders to maintain financial, energy and social stability next year.

He also asked the G7 to commit to increasing the assistance of gas to Ukraine.

“The terror against our power plants forced us to use more gas than expected. This is why we need additional support over this particular winter,” Zelensky said. “We are talking about the volume of about 2 billion cubic meters of gas that has to be procured additionally.”

New diplomacy: In the third and final step, Zelensky said Ukraine would like to offer a peace solution, beginning with asking Russia to start withdrawing troops this Christmas.

“This is the time for normal people to think about peace, not aggression. I suggest Russia to at least try to prove that it is capable of abandoning the aggression.”
“If Russia withdraws its troops from Ukraine, it will ensure a lasting cessation of hostilities.”

More context: Earlier on Monday, G7 leaders pledged to give “unwavering support for and solidarity with Ukraine” by promising to boost the country with military and air-defense systems, condemning Russia’s ongoing “war of aggression.”

There are conflicting reports about the condition of Bulyuk.

TASS is reporting, citing the head of the regional Ministry of Health Vadim Ilmiev, that Bulyuk has been injured in a “car explosion."

Ilmiev is quoted as saying, "he is wounded, his condition is stable, of moderate severity. He is in one of the medical institutions of the region."

However, the occupied Kherson region's Telegram channel is reporting that Bulyuk “was not hurt” and “miraculously Vitaly Viktorivich was not injured. His life is not in danger at the moment”.

The Telegram channel did report a few more details of the incident, saying it took place in the city of Skadovsk and that “one civilian was killed.”

It was not immediately clear who the fatality was.

The Group of Seven leaders (G7) pledged on Monday to give “unwavering support" and solidarity to Ukraine by promising to boost the country with military and air defense systems, condemning Russia’s ongoing “war of aggression.”

“We condemn Russia’s continuous inhumane and brutal attacks targeting critical infrastructure, in particular energy and water facilities, and cities across Ukraine, and recall that indiscriminate attacks and attacks on the civilian population or civilian objects, constitute a war crime,” a statement from the G7 leaders said. “We are determined to help Ukraine repair, restore and defend its critical energy and water infrastructure.”

The statement also said the leaders are determined that Russia will ultimately need to pay for the restoration of critical infrastructure “damaged or destroyed” through the invasion.

“We will hold President Putin and those responsible to account in accordance with international law,” the statement said. “We reiterate that Russia’s irresponsible nuclear rhetoric is unacceptable and that any use of chemical, biological, or nuclear weapons would be met with severe consequences.”

“Russia can end this war immediately by ceasing its attacks against Ukraine and completely and unconditionally withdrawing its forces from the territory of Ukraine,” the statement said.

CNN reported earlier Monday that US President Joe Biden was among the G7 leaders that would join Ukrainian President Volodymyr Zelensky for the virtual meeting Monday, a senior administration official told CNN. Energy — both immediate assistance for Ukraine, as well as the European Union’s energy issues — were set to be key topics.