Theresa May to resign as UK Prime Minister

Jeremy Corbyn, the leader of the opposition Labour Party, has already called for a general election. "Whoever becomes the new Tory leader must let the people decide our country’s future, through an immediate General Election," he said.

While calling for an election in the immediate aftermath of a prime minister's resignation is hardly radical, the fact that Labour believes the best way to decide the country's future is through a general election and not a second referendum is worth noting.

Corbyn has for months been under pressure from his party to clarify if he would formally back a second vote – in which Remain would be an option for voters.

Labour has been on election footing for some time and advisors have been privately saying that pushing the government to an election is their priority.

But while Labour is clearly confident that while the Conservative chaos is a huge opportunity, it's far from clear that an election now wouldn't return another hung parliament – in which no party has a majority.

Labour's plan to bounce the country into an election might be a clever plot to make short-term immediate gains. But the consequences of a lengthy election campaign have an all-too-familiar whiff. Getting into the weeds of a national campaign will allow both parties to pretend Brexit isn't happening, which is sort of how we ended up in this mess in the first place.

Bookmakers have seen a flurry of betting on the UK's next prime minister, in the minutes since Theresa May confirmed her resignation.

Boris Johnson leads the contest -- he's close to evens in the race, according to British betting website Oddschecker. In relative terms, the experts believe that Johnson's chances of usurping his colleagues are as high as 47%, the company says.

And punters seem to be in agreement with the bookmakers -- 41% of the bets made after May's speech went on the former Foreign Secretary.

He's followed by fellow hardline Brexiteer Dominic Raab, who quit as Brexit Secretary in protest over the deal May and the EU reached.

Jeremy Corbyn, the leader of the opposition Labour Party, said May was right to call it a day.

"She's now accepted what the country's known for months: she can't govern, and nor can her divided and disintegrating party," he adds, calling for her replacement to order a snap election.

"The burning injustices she promised to tackle three years ago are even starker today.
The Conservative Party has utterly failed the country over Brexit and is unable to improve the lives of people in our country or deal with their most pressing needs.
Parliament is deadlocked and the Conservatives offer no solutions to the other major challenges facing our country.
The last thing the country needs is weeks of more Conservative infighting followed by yet another unelected Prime Minister."

Boris Johnson, the frontrunner to replace May as prime minister, says it's time to follow May's "urgings," and come together to deliver Brexit.

Johnson has long held leadership ambitions but dramatically pulled out of the last leadership election, which May won.

Now could be the moment that the controversial former Foreign Secretary wins the big prize.

Ever since I first stepped through the door behind me as Prime Minister, I have striven to make the United Kingdom a country that works not just for a privileged few, but for everyone. And to honor the result of the EU referendum.
Back in 2016, we gave the British people a choice. Against all predictions, the British people voted to leave the European Union. I feel as certain today as I did three years ago that in a democracy, if you give people a choice you have a duty to implement what they decide. I have done my best to do that.
I negotiated the terms of our exit and a new relationship with our closest neighbors that protects jobs, our security and our Union. I have done everything I can to convince MPs to back that deal. Sadly, I have not been able to do so.
I tried three times.
I believe it was right to persevere, even when the odds against success seemed high. But it is now clear to me that it is in the best interests of the country for a new Prime Minister to lead that effort.
So I am today announcing that I will resign as leader of the Conservative and Unionist Party on Friday 7 June so that a successor can be chosen.
I have agreed with the Party Chairman and with the Chairman of the 1922 Committee that the process for electing a new leader should begin in the following week.
I have kept Her Majesty the Queen fully informed of my intentions, and I will continue to serve as her Prime Minister until the process has concluded.
It is, and will always remain, a matter of deep regret to me that I have not been able to deliver Brexit. It will be for my successor to seek a way forward that honors the result of the referendum.
To succeed, he or she will have to find consensus in Parliament where I have not. Such a consensus can only be reached if those on all sides of the debate are willing to compromise.
For many years the great humanitarian Sir Nicholas Winton – who saved the lives of hundreds of children by arranging their evacuation from Nazi-occupied Czechoslovakia through the Kindertransport – was my constituent in Maidenhead.
At another time of political controversy, a few years before his death, he took me to one side at a local event and gave me a piece of advice. He said, ‘Never forget that compromise is not a dirty word. Life depends on compromise.’ He was right.
As we strive to find the compromises we need in our politics – whether to deliver Brexit, or to restore devolved government in Northern Ireland – we must remember what brought us here.
Because the referendum was not just a call to leave the EU but for profound change in our country. A call to make the United Kingdom a country that truly works for everyone. I am proud of the progress we have made over the last three years.
We have completed the work that David Cameron and George Osborne started: the deficit is almost eliminated, our national debt is falling and we are bringing an end to austerity.
My focus has been on ensuring that the good jobs of the future will be created in communities across the whole country, not just in London and the South East, through our Modern Industrial Strategy.
We have helped more people than ever enjoy the security of a job.
We are building more homes and helping first-time buyers onto the housing ladder - so young people can enjoy the opportunities their parents did.
And we are protecting the environment, eliminating plastic waste, tackling climate change and improving air quality.
This is what a decent, moderate and patriotic Conservative Government, on the common ground of British politics, can achieve - even as we tackle the biggest peacetime challenge any government has faced.
I know that the Conservative Party can renew itself in the years ahead. That we can deliver Brexit and serve the British people with policies inspired by our values. Security; freedom; opportunity. Those values have guided me throughout my career.
But the unique privilege of this office is to use this platform to give a voice to the voiceless, to fight the burning injustices that still scar our society.
That is why I put proper funding for mental health at the heart of our NHS long-term plan.
It is why I am ending the postcode lottery for survivors of domestic abuse. It is why the Race Disparity Audit and gender pay reporting are shining a light on inequality, so it has nowhere to hide.
And that is why I set up the independent public inquiry into the tragedy at Grenfell Tower – to search for the truth, so nothing like it can ever happen again, and so the people who lost their lives that night are never forgotten.
Because this country is a Union. Not just a family of four nations. But a union of people – all of us.
Whatever our background, the color of our skin, or who we love. We stand together. And together we have a great future.
Our politics may be under strain, but there is so much that is good about this country. So much to be proud of. So much to be optimistic about.
I will shortly leave the job that it has been the honor of my life to hold – the second female Prime Minister but certainly not the last.
I do so with no ill will, but with enormous and enduring gratitude to have had the opportunity to serve the country I love.

Several pro-Remain MPs have expressed concern about the next Conservative leader, fearing a hardline Brexiteer will send Britain hurtling towards a no-deal exit.

"The prospect of an even more hardline Brexiteer now becoming PM and threatening a no-deal exit is deeply concerning," she added.

Economists have warned of the financial impact of a no-deal break, but most of the prominent Conservatives jockeying for position have advocated just that scenario.

Labour MP David Lammy said May's tenure "was doomed" from the moment she attached herself to the hardliners in her party.

His colleague Jess Phillips said the next leader must avoid "pandering to their biases."

A number of May's Cabinet members and colleagues are paying tribute to their boss after her emotional statement on the steps of 10 Downing Street. Amber Rudd, who has served as her Home Secretary and Work and Pensions Secretary, said she had shown "great courage."

And Liz Truss, another potential candidate in the race to replace May, praised her for a "dignified statement."

Here's video of Theresa May's speech, in which she announced the details of her departure as leader. 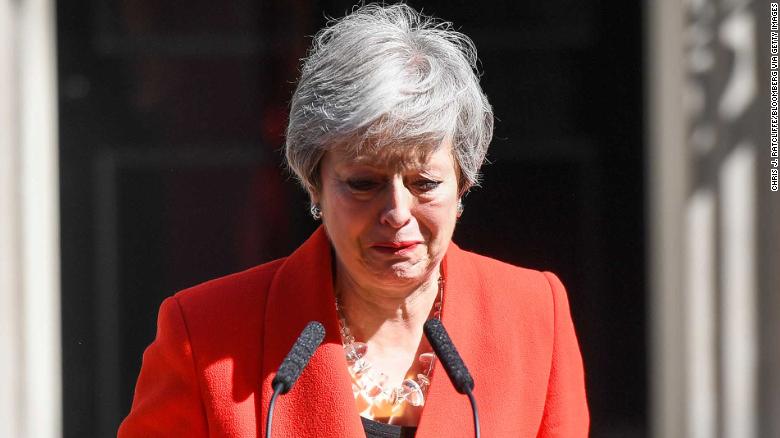 “I have done everything I can to convince MPs to back this deal,” May said of her attempts to pass a Brexit plan through Parliament.

“Sadly, I have not been able to do so -- I tried three times,” she added. Her failure to do so will be her lasting legacy as prime minister.

“I believe it was right to persevere….it is now clear to me that it is in the best interest of the country for a new PM to lead that effort,” May said.

She held back tears throughout the speech, but her voice croaked and May was visibly tearful as she came to her conclusion.