Our live coverage has ended. You can read more about Europe's heat wave here.

People in the UK are bracing for even hotter temperatures after the national all-time heat record was shattered with a reading of 39.1 degrees Celsius (102.4 degrees Fahrenheit) before midday, the UK Met Office tweeted.

People across the country, who are typically unprepared for extreme heat, experienced temperatures above 35 degrees Celsius.

The UK is bracing for multiple extreme heat records to be broken in various places today, the country's national weather agency warned.

Monday's temperatures reached 38.1 degrees Celsius (100.58 degrees Fahrenheit) in eastern England's Santon Downham, making it the third hottest day on record, while the UK had its hottest night ever.

Temperatures are likely to rise further through Tuesday, the office said.

As western Europe battles a new record-breaking heatwave, Germany is bracing for temperatures of up to 40 degrees Celsius (104 degrees Fahrenheit) in some regions on Tuesday and Wednesday.

''Tuesday and Wednesday could be the warmest days of the year — with temperatures expected to hit 40 degrees in southwest and western Germany on Tuesday. On Wednesday, the heatwave will shift towards the east and northeast,'' Friedrich went on to say.

The hottest day in Germany was recorded on 19 June this year, where temperatures reached 39.2 degrees Celsius in Cottbus and Dresden. "We can assume that this record will be broken on Tuesday," Friedrich said.

According to DWD, Germany's heat record stood at 41.2 degrees Celsius (106 degrees Fahrenheit), measured in Duisburg on 25 July 2019. "It is possible that we will get into similar ranges along the Rhine on Tuesday."

''The extreme heat is a result of climate change,'' Friedrich added. "Since the famous 'summer of the century' in 2003, we don't experience the 40 degrees Celsius (104 degrees Fahrenheit) mark every year. However, we do see very high temperatures more and more often in the summer," he went on to say.

Friedrich said that the extreme high temperatures will cause drought and dryness in some areas across Germany and the risk of wildfires remains very high.

Wildfires have already been seen in parts of southern France and Spain, with Portugal facing drought, and the UK, its first ever red weather warning for high temperatures.

As parts of Europe are hit with wildfires, droughts and record-breaking temperatures, travel plans for many have been put on hold.

On Monday, one of the UK's largest airports suspended flights after high temperatures damaged a runway. London Luton airport announced on Twitter that essential repairs were required after the high heat essentially "caused a small section to lift." Full operation commenced after 6 p.m. local time.

The Royal Air Force also paused all flights to and from Brize Norton in Oxfordshire, its biggest air base, after a report from Sky News suggested part of the runway had "melted." The UK Ministry of Defence tweeted a statement saying: "During this period of extreme temperature flight safety remains the RAF's top priority, so aircraft are using alternative airfields in line with a long-established plan. This means there is no impact on RAF operations."

Also in London, commuters have been told not to use the city's transportation services unless for "essential journeys" the Transport for London chief operating officer Andy Lord advised.

Regular track temperature checks will take place to prevent tracks from bending or buckling, TfL said in a statement. The network will also check air conditioning units across the Tube network and air cooling systems on the capital's double-decker buses.

Network Rail, which owns and operates Britain's railway, has asked people not to travel on Tuesday due to the extreme heat. In a tweet, the company said the East Coast Main Line will be closed and no services will run between London King's Cross and York and Leeds.

"A combination of extremely high local forecast temperatures and temperatures well in excess of those for which the infrastructure is designed for on the East Coast Main Line has led to this decision," it said on its website.

The UK Met Office has issued its first ever Red warning for heat, for both Monday and Tuesday.

Spain has also suspended train services in the country's northwest between Madrid and Galicia due to a fire close to the tracks, according to state-owned rail company RENFE. On Monday morning local time, the railway administer announced the suspension which will affect all trains on the route until further notice.

Hot-temperature records are far outpacing cool records across the globe so far this year as Europe and the United States brace again for dangerous heat waves.

Globally, 188 all-time heat records have been broken so far in 2022 (with more than 50 of those occurring in the past week), compared with just 18 cold records, according to data from the US National Oceanic and Atmospheric Administration.

Studies have shown that extreme heat will increase in frequency, intensity and duration because of the climate crisis and that extremes will occur more frequently on the hot-side compared to cold.

Gabriel Vecchi, a climate scientist and geosciences professor at Princeton University, told CNN that the hot-and-cold record imbalance is a signal of the climate crisis, and scientists have noted a trend in recent years that hot extremes are outpacing cold ones.

This is what you would expect from a planetary warming that's been driven in large part from greenhouse gases; this is now the world we're living in," Vecchi told CNN, adding "it's fair to think that almost every heatwave that we see right now has some influence from global warming."

Some background: Scenes of firefighters tackling wildfires and roads melting in extreme heat may look dystopian, but UK forecasters say these phenomena are a result of the ongoing climate crisis.

In the summer of 2020, meteorologists at the UK Met Office used climate projections to predict the weather forecast for July 23, 2050 — and the results are startlingly similar to their forecast for Monday and Tuesday.

"Today, the forecast for Tuesday is shockingly almost identical for large parts of the country," Simon Lee, an atmospheric scientist at Columbia University in New York, tweeted Friday, adding in a later post that "what is coming on Tuesday gives an insight into the future." 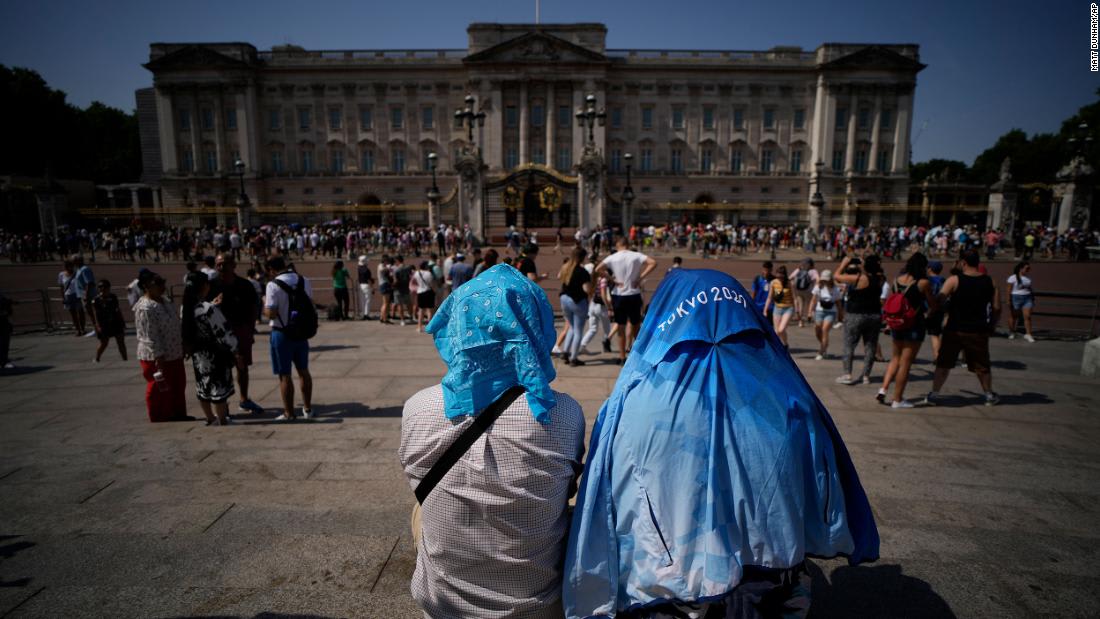 Hot records are outpacing cool by more than 10-to-1 this year as Europe, US brace for dangerous heat

The UK will face searing temperatures on Tuesday that could topple all-time records for extreme heat, a day after parts of the country experienced their hottest night recorded.

Tuesday is "expected to be even hotter," the Met Office's CEO, Penelope Endersby, told the BBC, adding that there was a higher chance of reaching 40 degrees Celsius.

"Even possibly above that, 41 is not off the cards," she said. "We've even got some 43s in the model but we're hoping it won't be as high as that."

Earlier this month, the Met Office said the extreme heat wave could put "people's lives at risk." In southern Europe, which is also experiencing a heatwave, more than 1,100 people have died in the exceptional heat.

The Met Office recently issued its first ever red extreme heat warning for parts of the country, including London and Manchester, calling the alert "a very serious situation."

"If people have vulnerable relatives or neighbours, now is the time to make sure they're putting suitable measures in place to be able to cope with the heat because if the forecast is as we think it will be in the red warning area, then people's lives are at risk," Met Office spokesman Grahame Madge said.

Some background: Commuters in the UK capital have been urged not to use London's transport network early this week unless for "essential journeys," amid a scorching heatwave across western Europe.

"Due to the exceptionally hot weather that is expected next week, customers should only use London's transport network for essential journeys," Transport for London (TfL) chief operating officer Andy Lord said.

Temporary speed restrictions will be introduced to London's tube and rail services "to keep everyone safe," Lord added, urging travelers to "carry water at all times."

Searingly hot temperatures can damage power lines and signaling equipment. TfL has said it will try to keep services running smoothly and use increased inspections to alleviate the impact of extreme heat.

Regular track temperature checks will take place to prevent tracks from bending or buckling, TfL said in a statement. The network will also check air conditioning units across the Tube network and air cooling systems on the capital's double-decker buses.

Motorists were also been encouraged not to drive during the hottest spells of the day.

A third wildfire has broken out in the Gironde region of western France, prompting the evacuation of 500 more people, according to the prefecture of Nouvelle-Aquitaine and Gironde.

After a “very difficult night” the prefecture tweeted on Tuesday morning a total of 19,300 hectares had already been burned by the two other fires in the Gironde.

A total of 37,000 people have been evacuated due to the three fires, the prefecture said, adding that more than 2,000 firefighters are deployed to fight the blazes.

The latest fire in the Vensac commune of Gironde had burned 70 hectares by Tuesday morning, according to the prefecture.

None of the fires have been resolved, according to Commandant Matthieu Jomain, spokesperson of the Gironde Fire and Rescue Service.

CNN affiliate BFMTV reported Tuesday morning that the city of Bordeaux, situated within the Gironde region, woke up to “thick smoke and a strong smell of burning” on Tuesday morning.

Jomain asked members of the public to refrain from calling the fire service over the smoke, as there is “no risk to the population” of Bordeaux. He said there had been several thousand calls related to the smoke during the night.

Vincent Ferrier, sub-prefect of Langon in the Gironde region, addressing journalists Tuesday morning, spoke of firefighters saving buildings from the fire in the Guillos commune when the flames were “at the door of the buildings.” In all, only one building had been destroyed by the fire, he added.

According to French meteorological agency Meteo-France, no region of France is under a red weather alert Tuesday, although 73 regions are under an orange warning.

Meteo-France warned of a risk Tuesday of wildfires breaking out in the south of France due to strong “mistral” winds and areas suffering severe droughts, particularly in the Rhone valley.

Extreme heat has engulfed parts of western Europe, with wildfires raging in France and Spain, a worsening drought in Portugal, and the third hottest day on record in the UK on Monday.

Fire has spread across 27,000 acres in the Gironde department of southwest France, forcing 32,000 people to evacuate, while nearby town, Cazaux recorded 42.4 degrees Celsius (108.3 degrees Fahrenheit) on Monday -- the hottest it has seen since its weather station first opened more than 100 years ago in 1921 -- according to French national meteorological service Météo France.

In Spain, wildfires swept the central region of Castile and Léon, as well as the northern region of Galicia Sunday, Reuters reported. Fire also forced the state railway company to suspend service between Madrid and Galicia.

More than 70,000 hectares have been destroyed in Spain because of fires this year, Spanish Prime Minister Pedro Sanchez said on Monday, which “is almost double the last decade's average."

The country's Carlos III Health Institute on Monday estimated a cumulative total of over 510 heatwave-related deaths in Spain, based on statistical calculation of excess deaths.

In total, over 1,100 people are thought to have died due to the ongoing heatwave in southern Europe.

On Tuesday, the blistering heat is expected to peak; the French capital Paris is expected to reach 39 degrees Celsius (102.2 degrees Fahrenheit), while the UK’s Monday temperature of 38.1 degrees, is expected to be surpassed, and be “even hotter” of potentially going over 40 degrees, according to the Met Office’s CEO Penelope Endersby.