Our live coverage has ended. You can read more about the situation at the border here.

As calm pervades the Ukrainian capital of Kyiv, the US views the Russian military threat to Ukraine growing.

The latest US intelligence indicates Russia is continuing to build up forces surrounding Ukraine in preparation for possible military action this week, a senior US official briefed on the intelligence tells CNN.

The US believes Russian military action would begin with air and missile attacks on key military infrastructure including airfields, air defense and early warning systems.

White House national security adviser Jake Sullivan told CNN on Sunday that “if there is a military invasion of Ukraine by Russia, it's likely to begin with a significant barrage of missiles and bomb attacks.”

The Russian plan would then be further invade Ukraine from multiple points in the east and north, including plans to surround Kyiv within one to two days of the start of military action.

The air assault “would then be followed by an onslaught of a ground force moving across the Ukrainian frontier, again, where innocent civilians could get caught in the crossfire or get trapped in places that they could not move from,” Sullivan added.

The US also believes Russia may attempt a so-called "false flag" attack prior to military action in an attempt to create a justification for further invasion. US officials have discussed possibilities including Russia staging an attack on its own forces which Moscow would then blame on the Ukrainian military.

Military officials caution that the Russian timeline could change or Putin could decide not to attack. However, Russia has the capabilities and forces in place to initiate widespread action in the coming days.

As tensions rise between Russia and Ukraine, the role that the North Atlantic Treaty Organization plays in the region has come into focus.

What is NATO? It is a European and North American defense alliance set up to promote peace and stability and to safeguard the security of its members. It was created as the Cold War escalated and is headquartered in Brussels, Belgium.

The aim of the United States-led alliance was to protect Western European countries from the threat posed by the Soviet Union and to counter the spread of Communism after World War II.

Which countries are in NATO?: Twelve founding countries — the United States, Canada, the United Kingdom, France and eight other European nations — signed the North Atlantic Treaty in 1949, pledging to protect each other by political and military means.

Over the decades since, the alliance has grown to include a total of 30 members.

Ukraine is not a member of NATO, but has long hoped to join the alliance. This is a sore point for Russia, which sees NATO as a threat and vehemently opposes the move.

Amid recent tensions with the West, Russia has asked for iron-clad guarantees that the alliance won't expand further east — particularly into Ukraine.

But the US and NATO have resisted those demands. The alliance has always had an "open door policy," which states that any European country ready and willing to undertake the commitments and obligations of membership is welcome to apply for membership. Any decisions on enlargement of the alliance must be agreed unanimously.

Following the end of the Cold War, NATO made it clear it would welcome expansion to the east and in 1997, Czech Republic, Hungary and Poland were invited to begin accession talks.

Since then, more than a dozen countries from the former Eastern bloc, including three former Soviet republics, joined the alliance.

Despite the major geopolitical changes since NATO's foundation, its stated purpose remains the same. The key principle underpinning the alliance is one of collective defense: "An armed attack against one or more of them in Europe or North America shall be considered an attack against them all."

What does that mean in practice? The principle of collective defense is laid out in Article 5 of the North Atlantic Treaty. It guarantees that the resources of the whole alliance can be used to protect any single member nation. This is crucial for many of the smaller countries who would be defenseless without its allies. Iceland, for example, has no standing army.

Since the US is the largest and most powerful NATO member, any state in the alliance is effectively under US protection.

Read more about NATO and its role here.

In remarks aired on Russian state television, Putin said, "In your opinion, Sergey Victorovich [Lavrov], is there a chance to reach an agreement with our partners on key issues that are of concern to us, or is it just an attempt to drag us into an endless negotiation process that has no logical resolution?"

In his reply, Lavrov noted that Russian officials have warned "against the inadmissibility of endless discussions on issues that need to be resolved today," but added that "there is always a chance" that diplomacy could work.

As he continued, he listed Russia's recent engagements with the US and France, and mentioned other countries who have scheduled engagements with Russia, including Germany, Italy and Poland.

Then he added, "Amid the readiness to listen to some counter-proposals, it seems to me that our possibilities are far from being exhausted. Of course, they should not continue indefinitely, but at this stage, I would suggest that they be continued and increased."

The “sovereign rights” of the Ukrainian people to aspire to NATO membership cannot be traded away, British Prime Minister Boris Johnson said on Monday.

“We can't bargain that away. It's for the Ukrainian people,” he told reporters.

It follows Ukraine’s foreign ministry walking back comments their UK ambassador made on Sunday, who suggested that Ukraine might consider not seeking to join NATO in an effort to prevent war with Russia.

Europe must get “Nord Stream out of the bloodstream” and seek alternative energy sources other than Russian gas pipelines in order to impose “severe economic consequences” on Russia should it invade Ukraine, Johnson said.

“It's very, very important that the West should stand united,” he added.

As Europe’s diplomatic pursuits continue amid fears that an invasion could be just 48 hours away, Johnson said he will be speaking to “various leaders” including US President Biden “very soon” but declined to answer if he had plans to travel to Moscow.

“Had a [phone] call with the [Belarusian] Defense Minister Viktor Khrenin. The goal of the dialogue - to relieve stress & prevent the escalation of relations,” Reznikov wrote. “We discussed topical issues & determined the algorithm for further interaction.”

“I see this as a positive signal & the 1st step towards cooperation,” Rznikov added.

The call takes place as Russia has amassed around 30,000 troops in Belarus for joint military drills.

Vitali Klitschko, the former heavyweight boxer and now mayor of the Ukrainian capital, has said the city has contingency plans in case of "Russian aggression," including shelters, evacuation procedures, and maintaining communications.

Klitschko acknowledged that people might be alarmed by recent developments, saying: “I want to emphasize: yes, the moment for our state today is really dramatic. Ukraine, during all its independence, has never faced such a threat.”

But he promised that “the whole life support system of Kyiv works without failures today. The efforts of the city authorities are aimed both at preventing possible provocations and at withstanding a military attack.”

He said communications would be maintained. “Enterprises are guaranteed uninterrupted communications in the absence of mobile communications and the Internet. We are also improving the notification system, which covers both city service staff and the public.”

Klitschko said contingency plans for evacuation were set up. "The evacuation plan determines the location of collection points, the number of vehicles needed, and the areas for housing the population. I want to notice once again -- within the capital."

Klitschko also appealed to foreign businesses not to abandon Ukraine.

“Your help is important today. And to ensure the smooth operation of critical infrastructure in case of emergency, and to equip reservists, and to meet the needs of people in case of a military attack on our country. I am grateful to those who already asks: "how can I help?" And I am grateful to the diplomats of foreign countries, who also offer help," he said.

Klitschko concluded by saying: "We will overcome all pandemics -- both the coronavirus and the virus of Russian aggression. Keep calm.”

China evaded questions on Monday as to why it had not yet evacuated its embassy staff and citizens from Ukraine amid heightened tensions with Russia.

In a briefing Monday, China's Foreign Ministry spokesperson Wang Wenbin said the embassy in Ukraine is "working normally" when asked by a reporter why China had not yet evacuated its embassy staff.

Without mentioning staff directly, Wang said the embassy continues to provide consular protection and assistance to “safeguard the safety and legitimate rights and interests” of Chinese citizens and enterprises in Ukraine.

A number of countries, including the United States, have urged citizens to leave the country and reduced staff at embassies in Ukraine as Russia continues its buildup on the border.

In a follow-up question on why it had not yet evacuated its citizens, Wang said China's position on Ukraine "is consistent and clear" and that parties should "remain rational and refrain from inflaming tensions or hyping up the crisis."

"All parties should push for a comprehensive settlement of the Ukrainian crisis and related issues through dialogue and negotiation," Wang said, reiterating that the Minsk Agreement should be "earnestly implemented."

On Saturday, the Chinese embassy in Ukraine issued a warning to Chinese citizens to "pay close attention" to the political situation between Ukraine and Russia.

"The current tense relations between Ukraine and Russia have aroused a lot of attention and there are various inconsistent opinions," the embassy's statement said. "Please pay close attention to the [political] situation in Ukraine and enhance your awareness of prevention. The Embassy will always be with you!"

China — which has its own tensions with the West — has expressed diplomatic support for its ally, Russia. In a joint statement issued at the start of February, Russian President Vladimir Putin and his Chinese counterpart Xi Jinping said both sides opposed "further enlargement of NATO." Russia fears Ukraine may join the alliance.

“Such a meeting is being prepared and we expect it to take place by the end of the week,” Peskov said in a conference call with reporters.

Asked about whether a decision on the withdrawal of Russian troops from Belarus would be made during that meeting, Peskov said: “Let's not jump ahead. Let's wait for the meeting. The two presidents will also make statements following the talks.”

In a transcript released Monday by his office, Lukashenko also confirmed a meeting with Putin in the near future and said a decision would be made regarding the timing of the withdrawal of Russian armed forces from Belarus.

“We will meet in the near future and decide when, at what time, and according to what schedule to withdraw the Armed Forces of the Russian Federation from here. It's our business," Lukashenko said, according to the transcript. 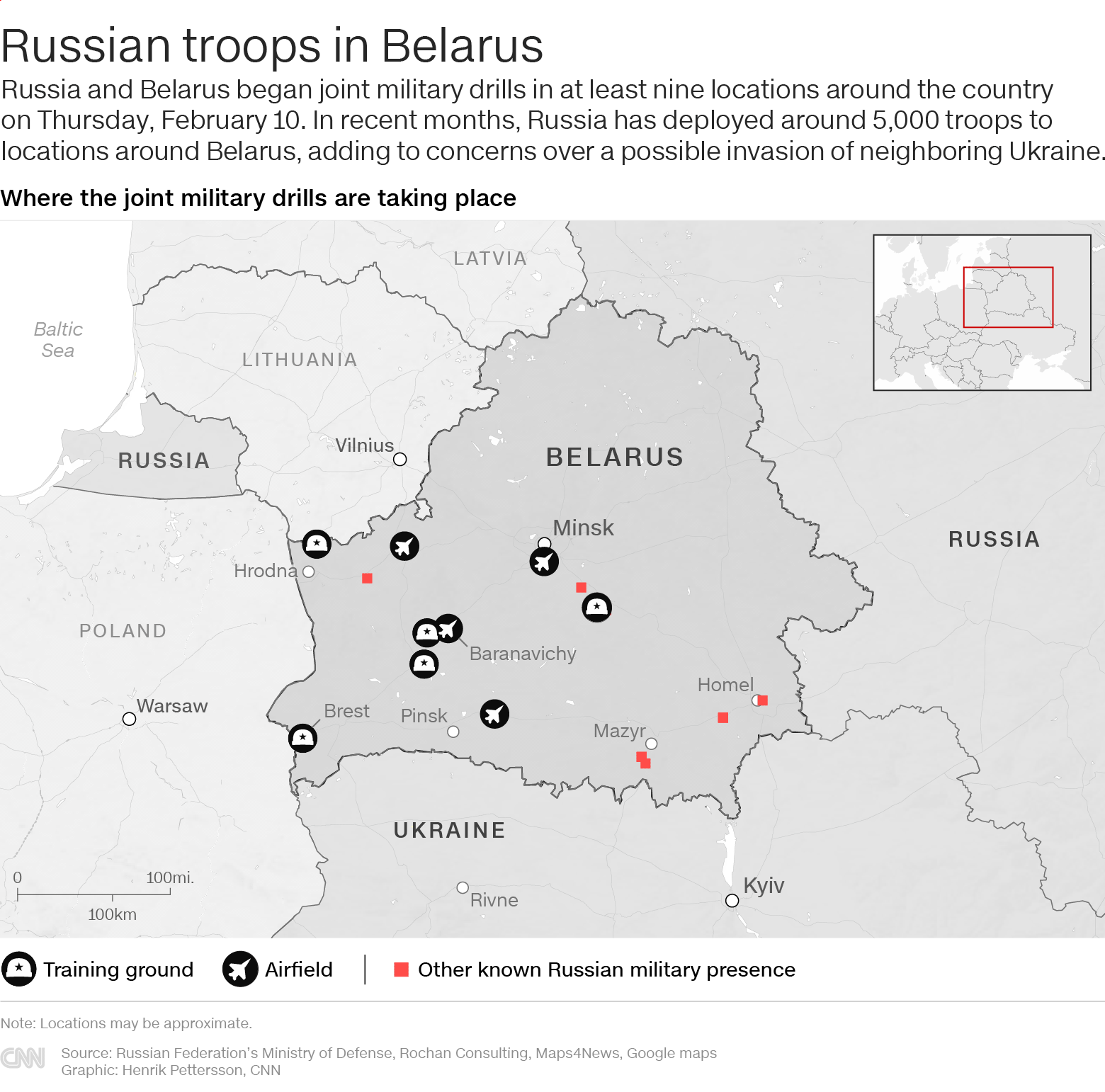 US President Joe Biden spent the weekend leading what is looking like an increasingly desperate final effort to forestall a Russian invasion of Ukraine -- an incursion that could have grave consequences for his own political standing.

If President Vladimir Putin orders his tanks into Russia's smaller, democratic neighbor, he would send shockwaves around the world and trigger one of the worst and most dangerous national security crises since the Cold War.

And while it is not his prime intention, Putin would cause significant damage to Biden's prestige and inflict real-time consequences on Americans in an already tense midterm election year -- including with likely new hikes to already soaring gasoline prices that often act as an index of voter anger and perceptions about the economy. 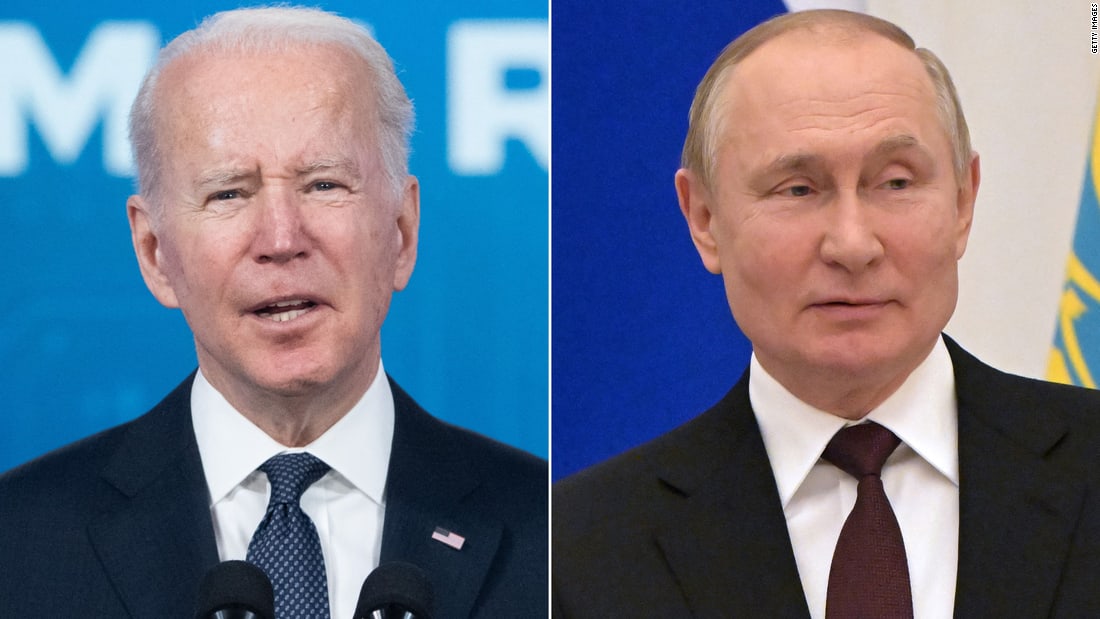 Analysis: Why a Russian invasion of Ukraine would hurt Americans too