Our live coverage has ended. You can read more about the situation at the border here.

Kremlin spokesperson Dmitry Peskov has said if Ukraine refused "the idea of joining NATO" it "would significantly contribute to the formulation of a more meaningful response to Russian concerns," in response to remarks made by Ukraine's ambassador in London over the weekend.

Vadym Prystaiko, the Ukrainian ambassador to the United Kingdom, had suggested the country may reconsider its ambitions to join NATO in an effort to prevent war.

Prystaiko clarified his comments on Monday, saying his country was "ready for many concessions" but added those concessions have "nothing to do with NATO, which is enshrined in the [Ukrainian] constitution."

Ukraine's Ministry of Foreign Affairs spokesman Oleg Nikolenko further clarified his country's position Monday, saying: "I’d like to repeat that these [Prystaiko's] words are a bad phrasing. The prospect of Ukraine's membership in NATO is enshrined in the Constitution and no decisions can be taken contrary to it."

Asked to respond to Prystaiko's remarks, Peskov said: “You [the reporter] also drew attention to the fact that Kyiv was asked to clarify the ambassador. This can hardly be perceived as a fait accompli -- a change in the conceptual foreign policy change of Kyiv."

Asked if such a hypothetical step would satisfy the Kremlin, Peskov said: “Undoubtedly. Something fixed, confirming Ukraine's refusal of the idea of joining NATO. This is certainly a step that would significantly contribute to the formulation of a more meaningful response to Russian concerns.”

This comes after US President Joe Biden spoke to Putin for around an hour on Saturday, but it did little to change Moscow's position on Ukraine. A senior administration official told reporters following the call that the discussion was substantive but the US fears Russia may still launch a military attack anyway.

The Russian Ministry of Foreign Affairs had on Friday accused Western countries and the press of spreading a "large-scale disinformation campaign" about an allegedly impending Russian invasion of Ukraine "in order to divert attention from their own aggressive actions."

German Chancellor Olaf Scholz is making a fresh attempt to resolve tensions between Russia and Ukraine through diplomacy on Tuesday. He is currently meeting with Ukrainian President Volodymyr Zelensky at the Mariinsky Palace in Kyiv.

The European Union will not be closing its diplomatic missions in Ukraine, the bloc said in a statement Monday, as various countries pull non-essential staff from their embassies.

“The EU and its member states are coordinating their actions in view of the current threats on Ukraine,” the EU statement read. “Our diplomatic missions are not closing. They remain in Kyiv and continue to operate in support to EU citizens and in cooperation with the Ukrainian authorities.”

“Staff presence and travel advice to EU citizens are being adjusted as necessary to take into account security circumstances,” the statement added.

The statement comes as ambassadors of EU member states endorse a proposal to provide €1.2 billion ($1.4 billion) in macro-financial assistance to Ukraine.

The proposal still has to be approved by the European Parliament and then formally by the EU Council, but the endorsement by EU ambassadors is expected to fast-track the process.

“The EU stands by Ukraine, also economically. The current geopolitical tensions are having a severe economic impact on Ukraine,” Bruno Le Maire, France's economy and finance minister said Monday according to a EU statement.

Le Maire said: “Member states are ready to provide €1.2 billion macro-financial assistance. I am happy to announce that we decided to support the Commission’s proposal today so that the financial help can reach Ukraine without delay.”

Russia has amassed more than 100,000 troops near Ukraine's border in recent weeks, according to US estimates, raising fears from Western and Ukrainian intelligence officials that an invasion could be imminent.

As frantic diplomatic efforts are made to avert war, analysts are warning that Russia's military poses an immediate threat to Ukraine.

But if an invasion were to occur, it is not clear where it would begin. Russia has created pressure points on three sides of Ukraine -- in Crimea to the south, on the Russian side of the two countries' border, and in Belarus to the north.

Here are the three fronts Ukraine and the West are watching, and the recent Russian movements detected in each. 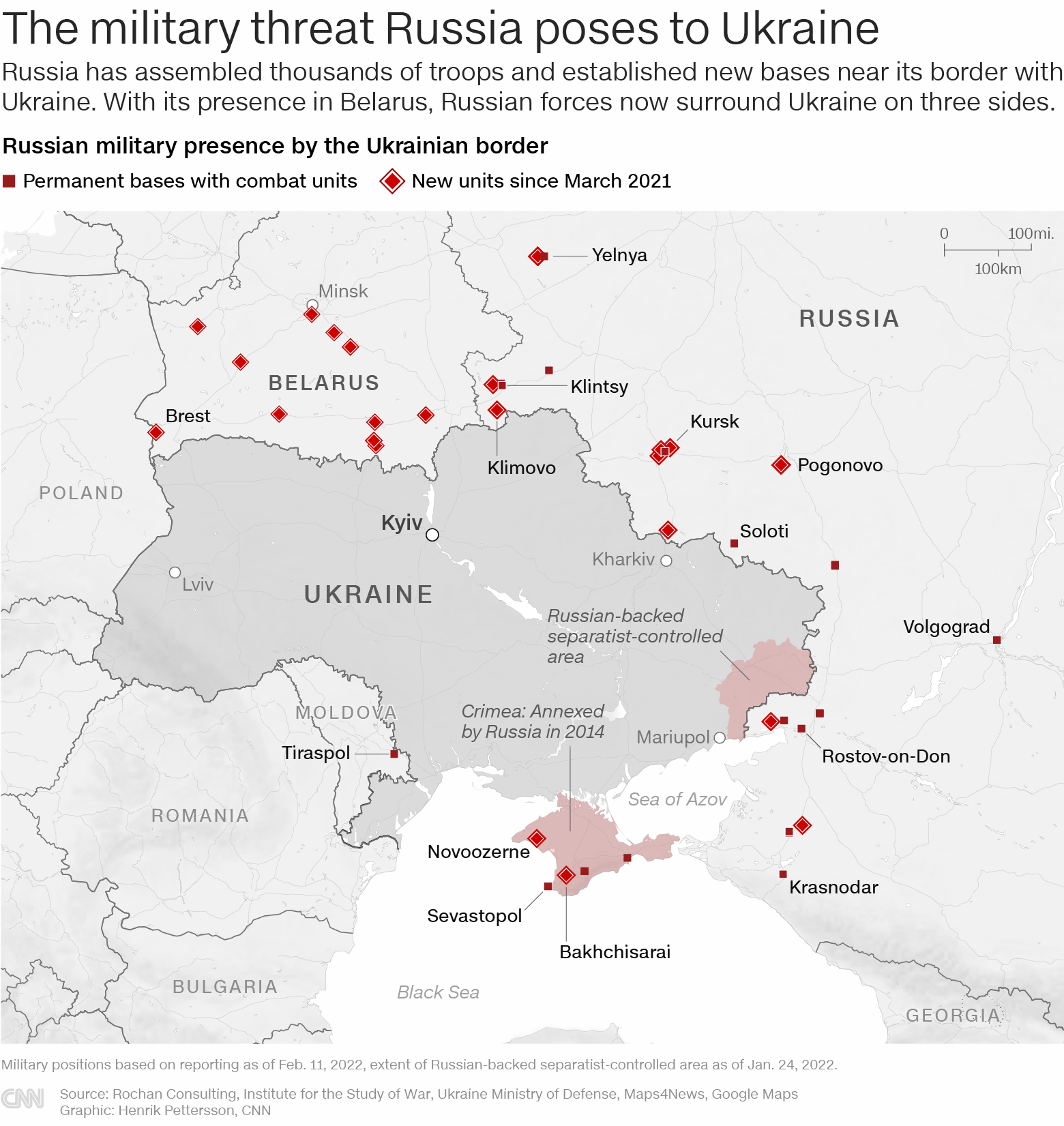 European markets all opened sharply lower with Germany’s DAX and France’s CAC 40 below 3%. UK’s FTSE 100 is down 2%.

US futures are also lower and Asian markets ended Monday’s session in red.

This comes as a number of countries have told their nationals to leave Ukraine after a week of failed diplomatic measures to avert Russian invasion of the country.

On Monday, Japan became the latest country to evacuate most of its embassy staff from Ukraine, according to the country's Chief Cabinet Secretary Hirokazu Matsuno.

In a press conference, Matsuno said that most of Japan's embassy staff in Kyiv are being asked to leave the country via commercial transport, with only essential ​personnel permitted to remain.

Meanwhile, Greece urged its citizens still in Ukraine to leave the country on Monday, imploring those who remain to "share their contact details immediately with the Greek Embassy" in Kyiv, its Foreign Ministry said. 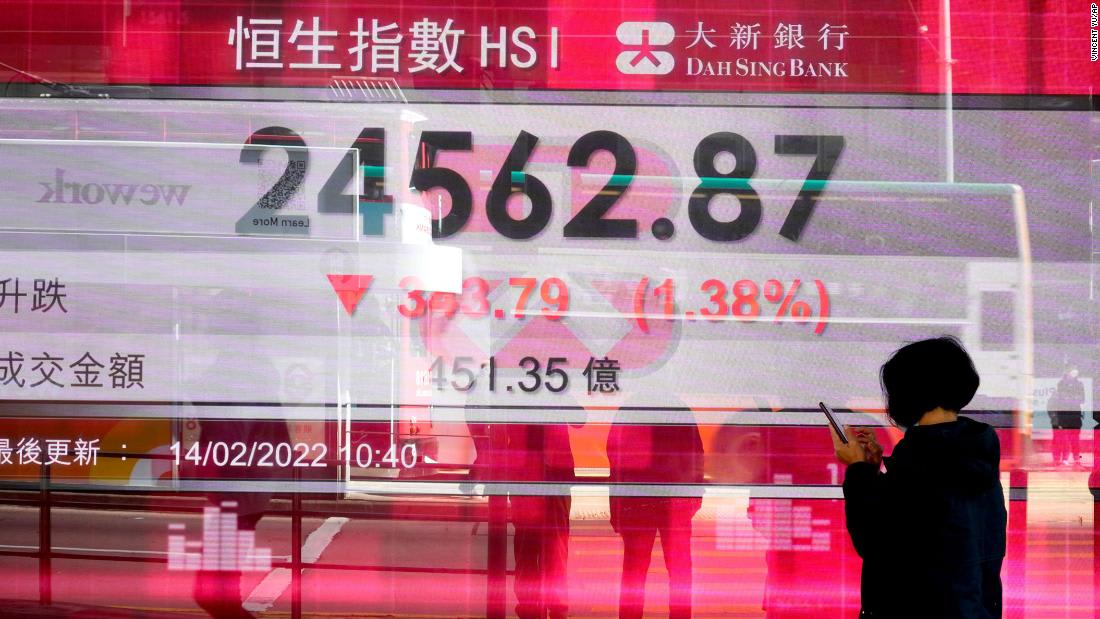 Vadym Prystaiko, the Ukrainian ambassador to the United Kingdom, has clarified remarks made Sunday when he suggested that Ukraine might consider not seeking to join NATO in an effort to prevent war with Russia.

Prystaiko told the BBC in an interview Monday: "We are not a member of NATO right now and to avoid war we are ready for many concessions and that's what we're doing in our conversations with Russians. But it has nothing to do with NATO, which is enshrined in the [Ukrainian] constitution."

In an earlier BBC interview, Prystaiko said: “What I’m saying here is that we are flexible, trying to find the best, best way out. If we have to go from, sort of some serious, I don’t know, some serious concessions, that’s something we might do. That’s, that’s for sure."

This comes as Russia argues that NATO support for Ukraine -- including increased weapons supplies and military training -- constitutes a growing threat on Russia's western flank.

The words of Ukraine's Ambassador to the United Kingdom Vadym Prystaiko that Ukraine is allegedly ready to consider giving up NATO membership in order to prevent a war with Russia have been taken out of context," Oleg Nikolenko told CNN.

"Of course, for the sake of peace and saving the lives of our citizens, Ukraine is ready to enter into any format of dialogue with countries and international organizations," he said.

"At the same time, Ambassador Prystaiko rightly noted in an interview that the prospect of NATO membership is enshrined in the Constitution of Ukraine, but Ukraine is not currently a member of NATO or another security alliance. Therefore, the issue of security guarantees becomes key for our country.

"Undoubtedly, the best such guarantee would be Ukraine's immediate accession to the Alliance. But threats to Ukraine exist here and now, so finding an answer to the question of guarantees becomes a fundamental urgent task. At the same time, no decision can be made contrary to the Constitution of Ukraine."

Britain will support whatever Ukraine decides to do regarding its pursuit of NATO membership, UK Minister for the Armed Forces James Heappey told Sky News Monday.

"If Ukraine decides that it is going to offer that it won't become a NATO member, we support that. That's for the Ukrainians to decide," Heappey told Sky News.

"Similarly, if Ukraine wanted to reserve its position and say that in the future it may want to join NATO, we would support that too because that's what sovereignty is and that's what we support," the minister added.

German Chancellor Olaf Scholz will make a fresh attempt at deterring Russian President Vladimir Putin from invading Ukraine after diplomatic efforts to avert war over the weekend failed to achieve a breakthrough.

Scholz, who will be in Kyiv Monday and Moscow on Tuesday, intends to "proceed with talks about the still very serious situation at the Ukrainian border. In Kyiv, it is important to me to express our continuous solidarity and support to Ukraine," Scholz wrote on Twitter.

“We urgently expect signs of de-escalation from Moscow. Further military aggression would have very serious consequences for Russia. I absolutely agree with our allies on this. We are experiencing a very, very serious threat to peace in Europe.”

This comes after a weekend of diplomacy which saw US President Joe Biden tell his Ukrainian counterpart Volodymyr Zelensky that the US would respond "swiftly and decisively" to further Russian aggression against Ukraine, according to a statement from the White House.

Biden spoke to Putin for around an hour on Saturday, but it did little to change Moscow's position. A senior administration official told reporters following the call that the discussion was substantive but the US fears Russia may still launch a military attack anyway.

The call between Biden and Putin came hours after the US moved some of its forces out of Ukraine and ordered the evacuation of most of its embassy staff on Saturday over invasion fears.