The latest on the Ukraine-Russia crisis

Leaders of the self-declared republics in eastern Ukraine posted videos online on Friday announcing that they were organizing the mass evacuation of civilians to Russia.

But a CNN analysis of the videos’ metadata indicates the footage was recorded days earlier.

Denis Pushilin, leader of the breakaway Donetsk state in eastern Ukraine, said on his video appeal that "today, Feb. 18, a mass centralized evacuation of the population to the Russian Federation has been organized.” Shortly afterwards, Leonid Pasechnik, the most senior official in the Luhansk People's Republic, announced a similar move.

In his video, Pushilin also claimed that a large-scale offensive by Ukrainian forces against the Donetsk People's Republic was imminent, a claim the Ukrainian authorities have strenuously denied.

CNN downloaded the videos from Telegram and checked their metadata.

Both video files have "Wednesday 16" as their creation date, meaning that they were recorded at least two days before they were posted on Telegram.

The platform preserves metadata for the videos posted there and it cannot be changed.

CNN is reaching out to the self-declared republics for an explanation.

Over the past week, the Russian president has focused international attention onto a series of military drills that have tested Russia's conventional military power.

Putin said Friday that "an active phase exercise [of military drills] is underway."

"Tomorrow we will even take part together in one of the serious events in this complex of military cooperation,” Putin added, speaking at a televised meeting with Lukashenko in Moscow.

According to a news release from Putin's press office:

"The exercises of the strategic deterrence forces were planned earlier, during which the readiness of the military command and control bodies, launch combat crews, crews of warships and strategic missile carriers to perform the assigned tasks, as well as the reliability of the weapons of strategic nuclear and non-nuclear forces, was checked," the statement read.

"The tasks envisaged during the exercise of the strategic deterrence forces were completed in full, all missiles hit the designated targets, confirming the specified characteristics," it added.

US Vice President Kamala Harris on Saturday vowed there would be a "swift, severe and united" response if Russia invades Ukraine in a highly anticipated speech at the Munich Security Conference in Germany.

Harris laid out retaliatory measures in a manner befitting her past career as a prosecutor, promising "significant and unprecedented" economic costs.

The Vice President took center stage in front of a large, international audience as she delivered the keynote address at the security conference.

The remarks came at a high-stakes moment after the United States' repeated warnings on Friday of efforts by Russia to mount an invasion.

CNN's International Diplomatic Editor, Nic Robertson, said it was "very clear why President Biden sent [Harris] there," and that she had delivered a message "of unity." 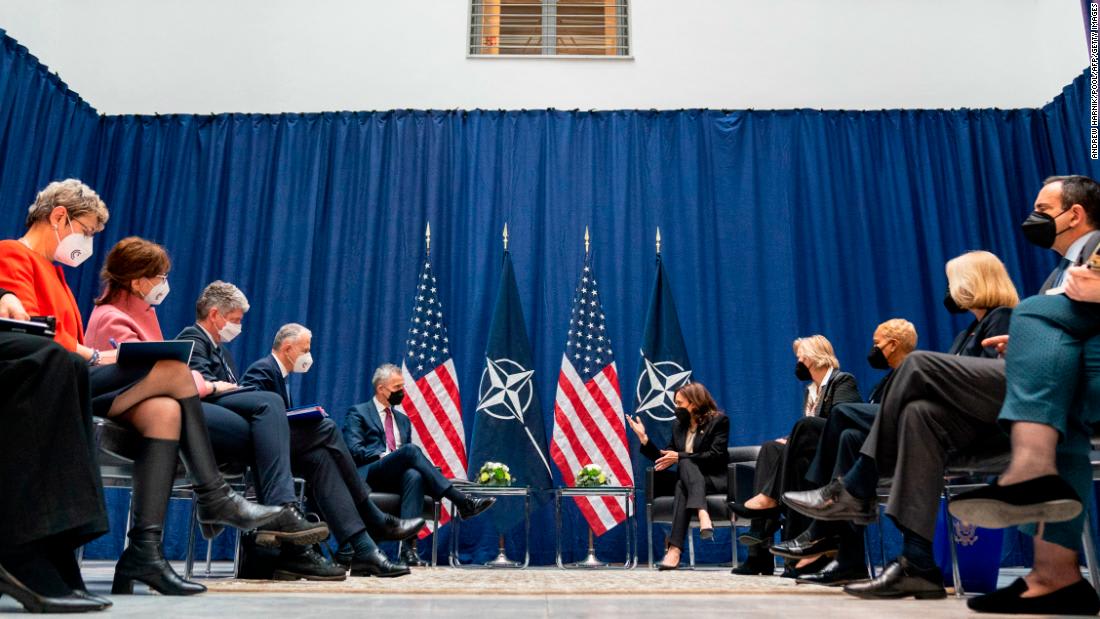 The United Kingdom has temporarily relocated its entire embassy in Kyiv to the city of Lviv in western Ukraine, according to an update from the UK Foreign Commonwealth Development Office (FCDO) on Friday.

This follows the decision to move all non-essential embassy staff to Lviv last Friday. A British diplomat told CNN at the time that "a core team" would "remain to continue with essential duties."

The FCDO reiterated its call to British nationals to "leave now while commercial means are still available," on Friday.

Earlier on Friday, the FCDO said it was "now advising against all but essential travel" to both Moldova and Belarus.

The news comes four days after US Secretary of State Antony Blinken announced his country was closing its embassy in Kyiv and "temporarily relocating" the small number of remaining diplomatic personnel in Ukraine to Lviv, "due to the dramatic acceleration in the buildup of Russian forces."

"I have ordered these measures for one reason -- the safety of our staff -- and we strongly urge any remaining US citizens in Ukraine to leave the country immediately," Blinken said in a statement Monday.

The Ukrainian military said the first 12 hours of Saturday saw Russian-backed separatists in eastern Ukraine commit 37 violations of the ceasefire along the so-called Line of Contact, including 35 incidents in which they utilized weapons prohibited by the Minsk Agreements.

The Joint Forces Operation said the violations included the use of 120mm mortars and 122mm artillery systems. At least one-third of the alleged violations were reported in one hour after 11:00 a.m. local time.

It also said that one Ukrainian serviceman was killed by a shrapnel wound to the head after several rounds of artillery fire were directed at Ukrainian positions near Myronivske early Saturday.

The Minsk II agreement of 2015 led to a shaky ceasefire agreement, and the conflict settled into static warfare along the Line of Contact that separates areas controlled by the Ukrainian government and separatists. The Minsk Agreements (named after the capital of Belarus where they were concluded) ban heavy weapons near the Line of Contact. 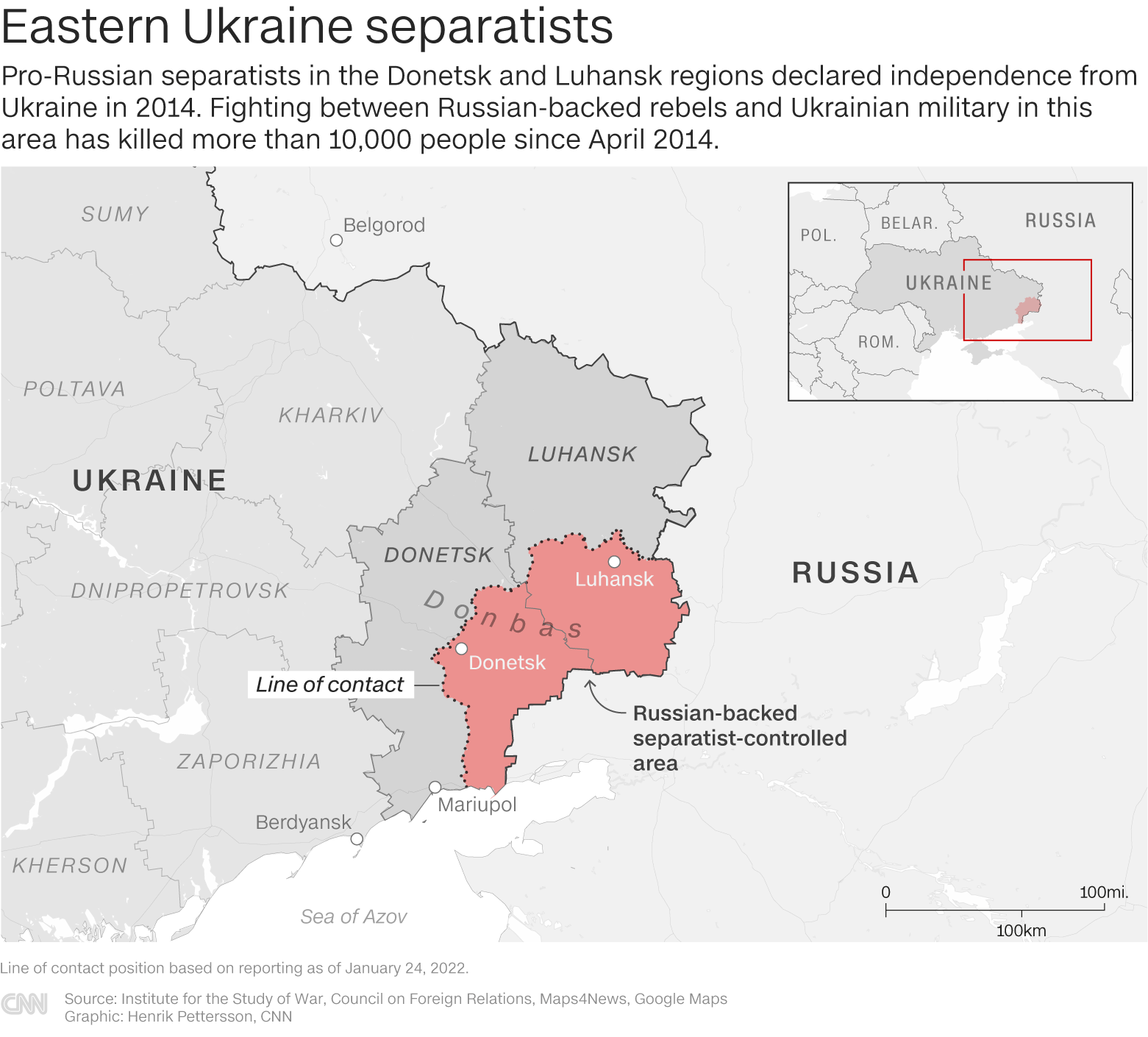 As the world watches and waits nervously to learn if Russian President Vladimir Putin willinstruct his forces to invade Ukraine, European diplomats are privately finding one small silver lining to the crisis unfolding in Eastern Europe.

The European Union and NATO have been remarkably united during this entire episode, which months ago was in no way a certainty.

Behind the scenes, diplomats, NATO sources and EU officials have praised the "unprecedented levels of unity and coordination" which has "strengthened the transatlantic alliance" as both institutions have worked in lockstep with each other and the US, as one EU official put it.

A senior European diplomat working in NATO said they had been "really surprised but thankful" at the regular contact and cooperation between leaderships of both the EU and NATO which has allowed the messaging directed at Moscow to be "coordinated and consistent at the highest diplomatic level, despite the cultural and geographical differences of all the stakeholders." 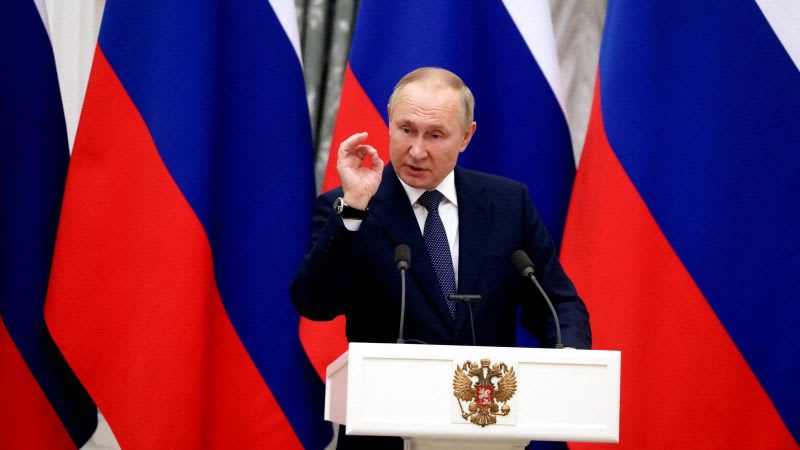 Vladimir Putin has succeeded in uniting his opponents | CNN

A total of 10,356 people have crossed from the Donbas region in Ukraine into Russia as of 10:00 am local time Saturday, Russia's state-run news agency RIA Novosti reports following the decision of the self-declared Russian-backed republics to organize an evacuation of civilians.

There is no way for CNN to independently verify the number.

RIA Novosti said 4,527 citizens of the Russian Federation, 5,806 citizens of Ukraine and another 23 foreigners had crossed, according to what it called "a source familiar with the situation." Russian agencies may quote police and security officials anonymously and CNN has been unable to independently verify those statements.

Earlier Saturday, the deputy head of the Russian Ministry of Emergency Situations Viktor Yatsutsenko said: "Seven regions of Russia are ready to accept refugees. These are the Krasnodar Territory, Kursk, Voronezh, Belgorod, Oryol, Bryansk, Moscow regions," in addition to the Rostov region which borders Ukraine.

He said that in total, these regions are ready to receive more than 28,900 people, RIA reported.

Russian news agency TASS reported Saturday that "all border checkpoints in the Rostov region function only for entry into Russia."

"All checkpoints were transformed only for the entrance to the Russian Federation," said an official of the internal security service the FSB, according to TASS.

The evacuation orders were given Friday by the leaderships of the Donetsk and Luhansk republics, who claimed they were necessary because of an imminent offensive by the Ukrainian army.

Ukrainian officials have repeatedly denied any such plans.

The Russian Embassy in the US says it rejects claims made by the White House that Russia was responsible for a massive cyberattack on Ukraine earlier in the week.

Late Friday the Russian Embassy in the US wrote on Twitter, “We categorically reject these baseless statements of the administration and note that Russia has nothing to do with the mentioned events and in principle has never conducted and does not conduct any 'malicious' operations in cyberspace.”

Anne Neuberger, US deputy national security adviser for cyber and emerging technology, said on the same day the US believes the Russian government was responsible for wide-scale cyberattacks on Ukrainian banks during the week.

In a second post on Twitter late Friday, the Russian Embassy in the US said, “We have taken note of purely anti-Russian statements of Deputy National Security Adviser Anne Neuberger, who accused the Russian special services of cyberattacks on Ukrainian defense agencies and banks.”

Neuberger told reporters Friday in the White House briefing room, “We believe that the Russian government is responsible for wide-scale cyberattacks on Ukrainian banks this week. We have technical information that links the Russian Main Intelligence Directorate, or GRU, as known GRU infrastructure was seen transmitting high volumes of communication to Ukraine-based IP addresses and domains.”

The UK government also attributed on Friday recent cyberattacks on the Ukrainian banking sector to the GRU.

Ursula von der Leyen, President of the European Commission, said the world is “watching in disbelief” in the wake of the largest buildup of troops in Europe since “the darkest days of the Cold War.”

“The very reason that the European Union was once created is that we wanted to put an end to all European wars," von der Leyen said at the Munich Security Conference on Saturday.

The world has been watching in disbelief as we face the largest buildup of troops on European soil since the darkest days of the Cold War," von der Leyen continued.

She added that the events “could reshape the entire international order.”

Highlighting Ukraine’s recent celebration of 30 years of independence, von der Leyen said there is an entire generation of Ukrainians born and bred in a free country who are now “confronted on a daily basis with external aggression and interference.”

“This is what the Kremlin's policies mean in practice, to instil fear and call it security, demands to deny 44 million Ukrainians from deciding freely about their own future, to deny a free country's right to independence and self determination,” she added.

“The consequences of this approach matter well beyond Ukraine.”

Speaking about Russia and China, von der Leyen said, “They seek a new era, as they say, to replace the existing international rules.”

“They prefer the rule of the strongest to the rule of law, intimidation and self-determination, coercion instead of cooperation."

Meanwhile, NATO Secretary-General Jens Stoltenberg said Moscow was attempting to roll back history and recreate its sphere of influence.

“The current crisis demonstrates the importance of the transatlantic relationship for European security,” Stoltenberg said at the Munich Security Conference on Saturday.

“If the Kremlin's aim is to have less NATO on his borders, it will only get more NATO and if it wants to violate them, it will always get an even more united alliance,” said Stoltenberg, stating earlier that NATO was a defensive alliance and “will take all necessary measures to protect and defend.”

“Over the last years, our security environment has fundamentally changed for the worse. Peace cannot be taken for granted. Freedom and democracy are competitive and strategic competition is on the rise.”