Kremlin spokesman Dmitry Peskov referred to Russia’s military attack on Ukraine as a “special operation” Thursday, but dodged most questions on its nature or objectives in a call with foreign journalists.

"I cannot give you information on the military, technological and other components of this operation,” Peskov said. “The only primary source here should be our military and defense departments.”

The spokesman added that occupation was not the objective, echoing President Vladimir Putin's claims in a televised address earlier on Thursday.

“No one is talking about occupation, in this scenario that word is not applicable,” Peskov said. “This is a special operation. I do not think it's necessary for me to explain anything here, because the president himself gave exhaustive explanations.”

In his speech, Putin said he had decided "to conduct a special military operation ... to protect people who have been subjected to abuse and genocide by the Kyiv regime for eight years," repeating a baseless claim about Ukraine's Russian-separatist-backed Donbas region.

The invasion began soon afterwards with a series of missile attacks against locations near Kyiv, as well as the use of long-range artillery against the northeastern city of Kharkiv, near the Russian border.

After months of military buildup and brinkmanship, Russian forces have begun an invasion of Ukraine.

Thursday saw reports of troops crossing the border to the north and south, explosions in multiple cities including the capital Kyiv and warnings from Russian President Vladimir Putin of bloodshed unless Ukrainian forces lay down their arms.

The first blasts were heard at around 5 a.m. Thursday, prompting immediate condemnation from the United States and its allies, which have threatened to enact "full scale" sanctions in response to Russian military aggression.

The escalation in the years-long conflict has triggered the greatest security crisis on the European continent since the Cold War, raising the specter of a dangerous showdown between Western powers and Moscow.

As air raid sirens rang out across Kyiv early Thursday, Ukrainian President Volodymyr Zelensky moved to enact martial law and government ministers accused Moscow of launching a "full-scale invasion." As dawn broke, heavy traffic could be seen clogging roads heading west out of the city, while further east, near the Russian border, the mayor of Kharkiv urged citizens not to leave their homes.

CNN teams in Russia and Ukraine also heard blasts from several parts of Ukraine, including near the capital Kyiv and the port city of Odessa, and images released by the office of President Zelensky showed large explosions to the east of the capital Kyiv with huge columns of smoke rising into the air. 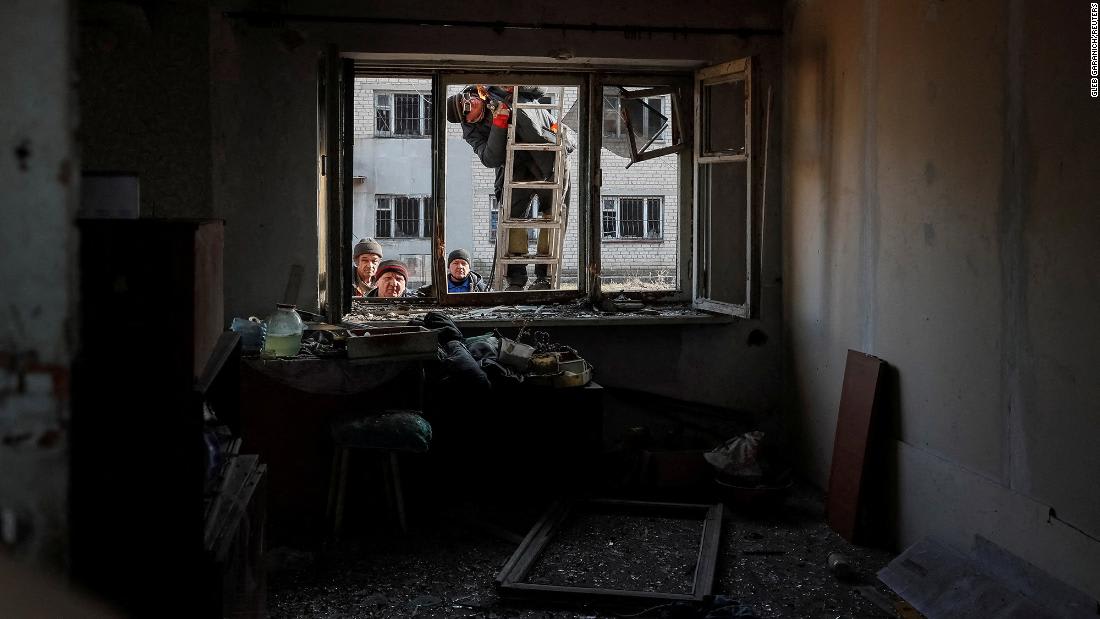 Britain has summoned its Russian ambassador as the UK's foreign secretary warned that "severe sanctions" will be imposed on Moscow for its "illegal, unprovoked invasion of Ukraine."

"I have summoned the Russian ambassador to meet me and explain Russia’s illegal, unprovoked invasion of Ukraine," Foreign Secretary Liz Truss said in a tweet Thursday.

Truss warned that the UK will be "imposing severe sanctions and rallying countries in support of Ukraine."

Russian forces invaded Ukraine from three sides, while explosions rang through a number of cities, including the capital Kyiv, in a broad attack that began before dawn on Thursday.

Here's a timeline of how and when it unfolded.

Putin announces attack: Russian President Vladimir Putin made a speech early Thursday morning, saying he had decided "to conduct a special military operation ... to protect people who have been subjected to abuse and genocide by the Kyiv regime for eight years," repeating a baseless claim about Ukraine's Russian-separatist-backed Donbas region.

He denied, however, that Russia was planning to occupy Ukrainian territories. "We are not going to impose anything on anyone by force."

But in a deeply menacing passage Putin added that anyone trying to interfere with or threaten Russia would lead to "consequences that you have never experienced in your history."

Ukrainian President Volodymyr Zelensky responded several hours later with a minute-long speech of his own, saying he had spoken to US President Joe Biden and that the United States was rallying international support for Ukraine.

"The West is with us," he said, and announced martial law across the country.

A pre-dawn assault: The invasion began hours before dawn with a series of missile attacks against locations near Kyiv, as well as the use of long-range artillery against the northeastern city of Kharkiv, near the Russian border.

It quickly spread across central and eastern Ukraine as Russian forces attacked the country from three sides. In the hours before daylight, people in the cities of Odessa, Dnipro, Mariupol and Kramatorsk reported huge blasts.

Immediate details of casualties were unclear. The Ukrainian Defense Ministry claimed its troops sustained no losses. 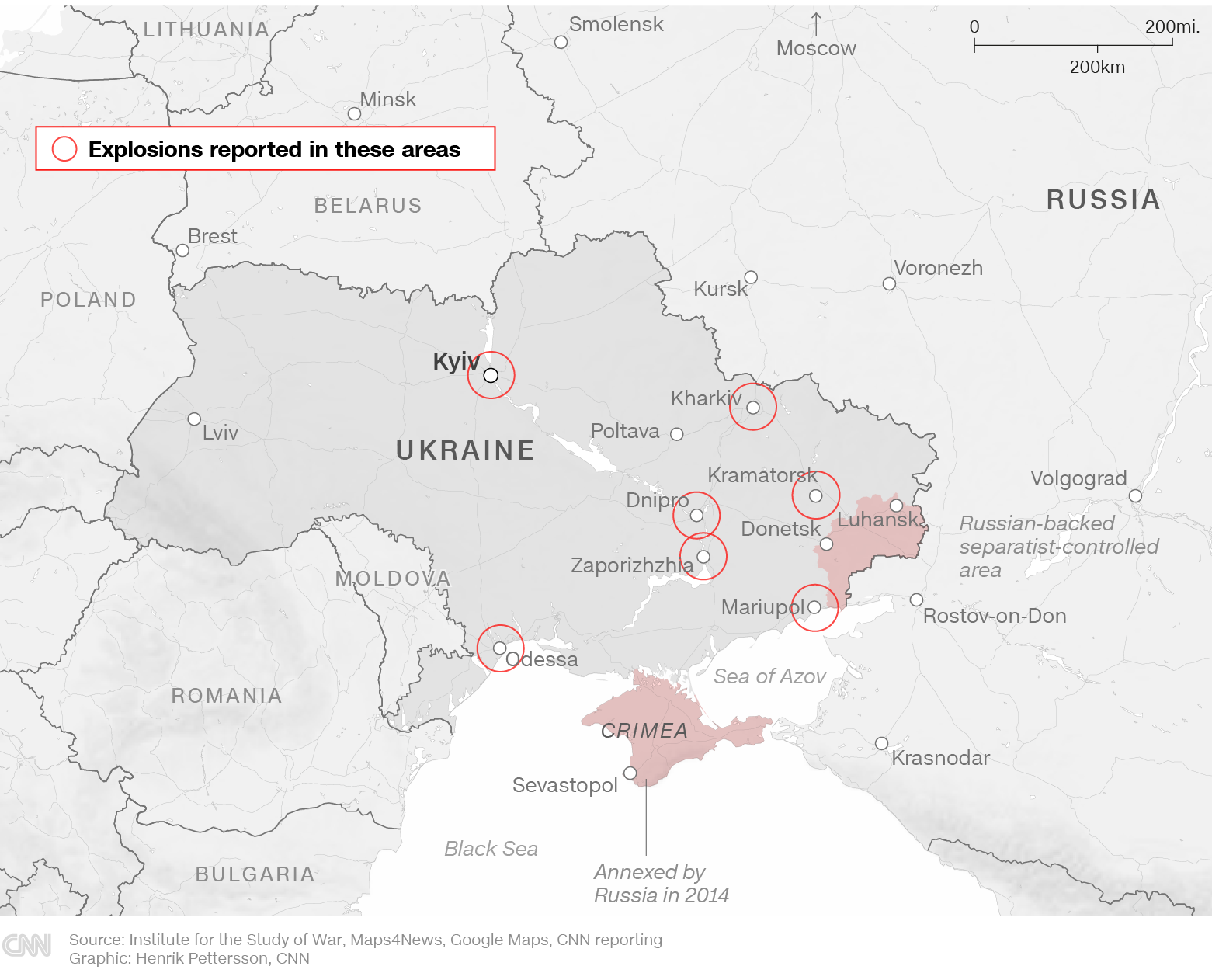 But there was clearly substantial damage in and around several cities. In Kharkiv, video emerged of an apartment block that had been damaged by a missile or long-range artillery. Another video showed a rocket embedded in a road. The State Emergency Service reported that six people were trapped in rubble in Nizhyn.

Ukraine's interior ministry said ballistic missiles had been used as part of the offensive, while jets were heard over the central city of Zaporizhzhye.

The Russians used a wide array of weaponry in their assault, including attack aircraft and helicopters, tanks, long range artillery and missiles.

Dawn breaks: After dawn, air sirens sounded across Kyiv and also in the western city of Lviv. A short time later a single, unidentifiable plane roared above the capital.

As the day began in Kyiv, streams of vehicles could be seen crossing the North Bridge, heading west, away from the focus of the Russian assault. Other people in the capital sought shelter in the subway.

Across the country long lines formed at gas stations and cash machines. A few people gathered in the streets of Kharkiv to pray.

Under overcast skies on Friday morning, Kiev appeared to be in a state of shock. The streets were quiet and schools closed. Here and across the country, Ukrainians are just beginning to come to terms with a cataclysmic night and the prospect of a deeply uncertain future.

CNN teams across Ukraine and Russia contributed to this report.

German Foreign Minister Annalena Baerbock on Thursday said the European Union is set to unleash “the full packet of sanctions” against Russia, adding that the world must respond resolutely to the invasion of Ukraine, or run the risk of paying an even higher price.

We woke up in a different world today,” Baerbock told reporters at a news conference in Berlin, adding “we will launch the full package of massive sanctions against Russia.”

“If we do not take a firm stance now, we will pay an even higher price,” Baerbock continued.

Baerbock noted that Russia had “rejected our offers of talks.” She also appealed directly to Russian President Vladimir Putin, saying: “You will never destroy the dream of democracy” and said Ukraine had “done nothing wrong” to merit Russia's invasion.

The foreign minister called again on German citizens to leave Ukraine immediately, adding that if they cannot leave the country safely, they should stay in a safe place. Baerbock said that German embassies in neighboring countries will be present on the borders to provide help to EU citizens.

Germany will decide shortly if the country's embassy can continue its operation from Lviv, Baerbock concluded.

US President Joe Biden was working the phones with top national security officials in the moments before and after his Russian counterpart Vladimir Putin announced he was launching a military intervention in Ukraine, the grim fulfillment of Biden's predictions stretching back weeks.

National security aides had already been huddling in the West Wing on Wednesday evening, preparing for what US officials had warned was a looming assault on Ukraine, when Putin's speech began airing on Russian television around 9:45 p.m. ET.

Appearing before dawn in Russia, the speech came as a surprise.

At the United Nations, Ambassador Linda Thomas Greenfield had spoken by phone to Biden in the moments prior to her remarks at an emergency session of the Security Council. He asked her “to convey in the strongest possible terms his -- and our -- steadfast support for Ukraine," she said around 9:45 p.m. ET -- almost exactly the same time as Putin's address.

Her speech didn't reflect the major development that Putin had officially announced the invasion. Photos from the room show her texting with the Ukrainian delegate, saying she "wished I had the news before I ended my remarks."

Just past 10 p.m. ET, activity in the West Wing briefly came to a halt as televisions tuned to CNN showed teams reporting hearing explosions in Kyiv and Kharkiv, hurriedly donning their protective gear and helmets.

In their offices, Sullivan and other aides worked on drafting Biden's initial statement declaring Russia's actions "unprovoked and unjustified" and vowing "the world will hold Russia accountable." Biden's statement came through at 10:25 p.m. ET.

Roughly an hour later, a request came in from Ukrainian President Volodomyr Zelensky to speak with Biden, who was eager to get him on the phone. Earlier in the day, officials took note of Zelensky's public concerns, including declaring a state of emergency and mobilizing military reservists, believing it was first time he had conveyed publicly the concerns they have discussed privately for weeks.

On their call, which lasted approximately 10 minutes, Zelensky asked Biden to "call on the leaders of the world to speak out clearly against President Putin's flagrant aggression, and to stand with the people of Ukraine."

As Biden was speaking to Zelensky, his aides were also on the phone to Europe as they prepared to announce what one official described as the "full scale" of sanctions, which could include export controls, restrictions on large banks and blocks on members of Putin's inner circle.

Biden starts Thursday with additional briefings before attending a virtual session of the G7, where the sanctions will be discussed among the world's leading industrialized nations.

And at noon, Biden will speak to the American people from the White House. 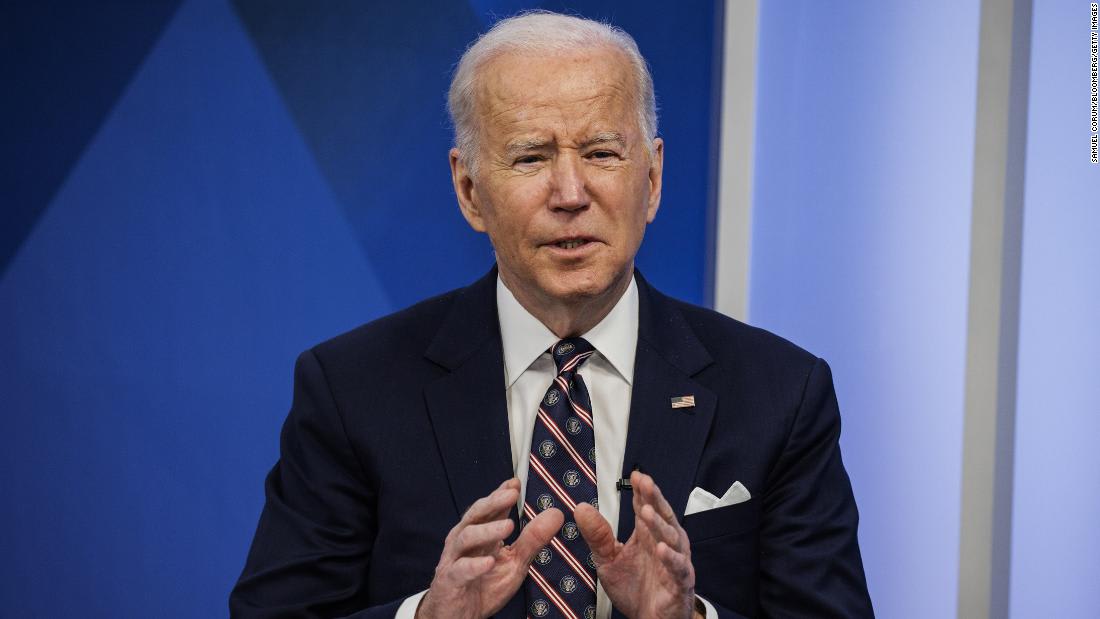 The Ukrainian Presidency has said that more than 40 soldiers have been killed since the Russian invasion of Ukraine began -- and a few dozen injured.

Oleksiy Arestovych, an adviser in the President’s Office, said that in addition to the military casualties, “as far as I know, at the moment there are a few civilian deaths -- up to ten.”

We will freeze Russian assets in the European Union and stop the access of Russian banks to European financial markets,” Von der Leyen told reporters on Thursday.

“We condemn this barbaric attack and the cynical arguments that are being used to justify it.”

“These sanctions are designed to take a heavy toll on the Kremlin's interests and their ability to finance war. And we know that millions of Russians do not want war,” she said.

“We will not allow President [Vladimir] Putin to replace the rule of law, by the rule of force, and ruthlessness,” she said, "Ukraine will prevail."

Speaking alongside Von der Leyen, EU High Representative Josep Borrell said punitive measures from the 27-member bloc against Russia would be “the harshest packet of sanctions that has ever been implemented.”

The General Staff of the Ukrainian Armed Forces says it has shot down a sixth Russian plane, this time in the Kramatorsk area.

The update follows a claim earlier Thursday that it had shot down five aircraft and a helicopter as Russian forces attacked Ukraine.

In response, the Russian military earlier denied the claims, according to state news agency TASS.