Ukrainian citizens Yaryna Arieva and Sviatoslav Fursin got married just hours after Russia launched its invasion of their country. They spent their first day as a married couple collecting their rifles and getting ready to defend Ukraine.

It was supposed to be a May wedding, but the couple were no longer sure of what their future holds.

Arieva and Fursin have both signed up with the Territorial Defense Forces, a branch of Ukraine’s armed forces that is comprised mostly of volunteers. Once armed, the couple headed to the office of their political party, the European Solidarity.

“Right now, we are here and we are doing everything we can. So there is a lot of work to do, but still, I hope everything will be OK," Arieva said, adding that some civilians who are not part of the defense force were also given rifles.

“There are some places you can get them, and you just sign the papers, and you can go and protect your country,” she said. “That's the situation right now.”

More than 50,000 Ukrainian refugees have left the country in less than 48 hours, according to United Nations High Commissioner for Refugees Filippo Grandi, who said the majority have gone to Poland and Moldova.

“More than 50,000 Ukrainian refugees have fled their country in less than 48 hours – a majority to Poland and Moldova – and many more are moving towards its borders,” Grandi said in a tweet. “Heartfelt thanks to the governments and people of countries keeping their borders open and welcoming refugees.”

The United Nations refugee agency estimated Thursday that tens of thousands will be displaced as Russia invades Ukraine. The agency is stepping up operations and capacity in Ukraine and neighboring countries as people start to flee.

Delta Air Lines is ending its partnership with Russian airline Aeroflot in response to the invasion of Ukraine.

“We have removed our code from Aeroflot-operated services beyond Moscow’s Sheremetyevo Airport and removed Aeroflot’s code from Delta-operated services from Los Angeles and New York-JFK,” said a statement from the airline. “Accommodations will be made for customers affected by these changes.”

Aeroflot joined the SkyTeam Alliance in 2004, a partnership of 19 international airlines of which Delta is also a member. Delta said it does not operate flights to Ukraine or Russia.

Democrats in Congress are calling for the White House to take new steps to blunt the impact of soaring gasoline prices in the wake of Russia’s attack on Ukraine.

“As Russia’s invasion of Ukraine continues to cause volatility in the global oil market, we are writing to urge you to consider using all of the tools at your disposal to insulate Americans from rising gasoline prices,” the lawmakers wrote in a letter to President Biden dated Thursday.

The lawmakers also encouraged the use of “diplomatic pressure” to persuade global oil producers to boost production and “restrictions on petroleum exports unless they will advance our national security goals and lower prices for consumers.”

The national average price for regular gasoline climbed to $3.57 a gallon on Friday, according to AAA. That’s up by about 3 cents in just a day and 23 cents in a month. Gasoline prices move with a lag to oil.

Russia has “about a third of their combat power” in Ukraine out of the total amassed for invasion on Ukraine’s borders right now, a senior US defense official told reporters Friday.

“That does not mean that they will not commit more,” the official said. “I’m just giving you a snapshot of what we’re seeing right now.” 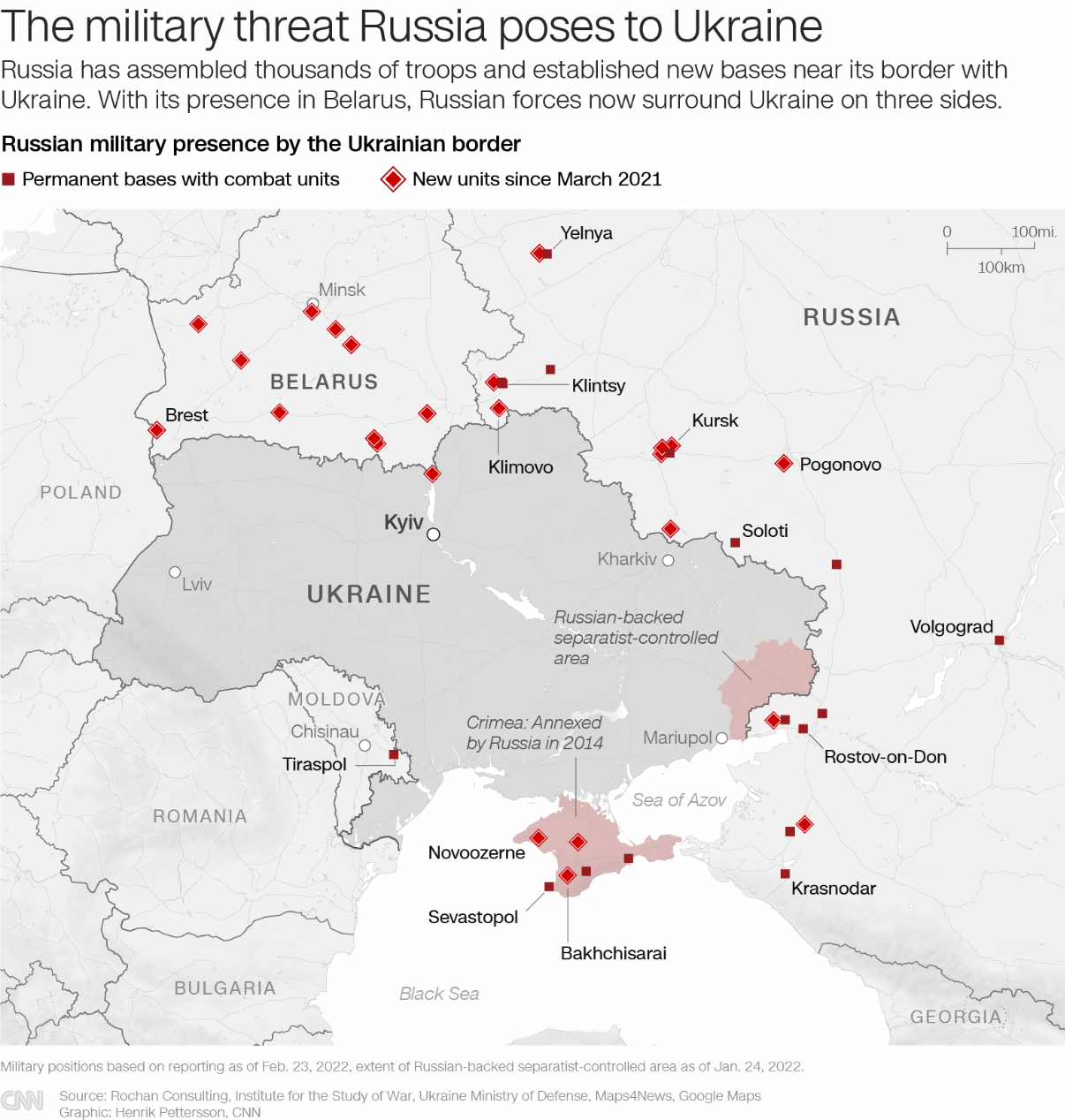 US Trade Representative Katherine Tai called Russia’s invasion of Ukraine “gravely concerning” and emphasized the need for US coordination with NATO allies to “respond appropriately” to the attacks.

“I think what's happening between Russia and Ukraine is gravely concerning to all of us who are watching it,” Tai told US Agriculture Secretary Tom Vilsack during a United States Department of Agriculture event Friday.

Tai underscored how “we as a government stand with our NATO allies,” adding that “there is a lot of coordination that we need to do with those allies, but also within our own government and economy to look at appropriate responses to the Russian actions.”

“But the really critical piece,” Tai said, “in terms of the coordination between the allies and within our own government and economy, is to figure out how to respond appropriately and also to look after the impacts to our economy.”

This comes as concerns have grown over the potential impact of Russia’s invasion of Ukraine on agricultural products worldwide. Russia is the world's top exporter of wheat, and Ukraine is also a significant exporter of both wheat and corn.

Tai described Ukraine as an “agricultural powerhouse” Friday and noted to Vilsack that USDA and USTR are “going to have to work very closely to assess where the impacts are going to be, especially when it comes to agricultural trade."

The US will further need to determine “how our trade policies take into account the foreign policy needs but also our domestic economic needs to ensure that we can be the kind of trading partner that our allies need us to be and how we take care of our own,” Tai said.

The US has observed at least 200 total missile launches since the beginning of the Russian invasion of Ukraine, a senior US defense official told reporters Friday.

“Some of these missiles we have assessed have impacted civilian residential areas,” the official added.

The death toll of these missile launches is unknown by the US.

There is an “amphibious assault” underway on the Sea of Azov, located west of Mariupol in Ukraine, a senior US defense official told reporters on Friday.

The official did not know exactly what these infantrymen are going to do in Ukraine, but the official said “the general assumption is they are going to move towards the northeast, towards Mariupol and the Donbas region.”

Russian forces advancing towards the Ukrainian capital city of Kyiv are “meeting more resistance than they expected,” a senior US defense official told reporters on Friday.

“I can’t give you an exact geographic location of where they are, but they are not moving on Kyiv as fast as they anticipated they would be able to,” the official said.

The official added, Russians “continue to try to move on Kyiv,” even though they are meeting Ukrainian resistance.

The Russian invasion of the country is continuing in the Kharkiv area of Ukraine and from the south towards the Ukrainian city of Kherson on the river, the official added. These are still the three main advances on the country that Russia began yesterday, the official said.

There have been “no additional airborne drops over the last 24 hours” in the Kharkiv area, the official said.

The biggest change that the US is seeing is from the advance in the south, the official added. Russian forces are still moving towards Kherson on the river, but they are also splitting off some forces to go to the northeast “in the direction of Mariupol and the Donbas region,” the official said.

“The south towards Kherson on the river — we do assess that they continue to move in that direction. But we also think that — based on what we’re seeing in addition to moving from Crimea on an axis towards the northwest towards Kherson — they are also splitting off some forces to go to the northeast, sort of in the direction of Mariupol' and the Donbas region,” the official said.

Here's a map to understand the locations better: