CNN could not immediately check the veracity of those claims.

"Groupings of troops of the DPR and LPR [the self-declared Donetsk and Luhansk People's Republics] continue counter-offensive operations against units of the Armed Forces of Ukraine with fire support from the Armed Forces of the Russian Federation," Igor Konashenkov said. "Troops of the DPR ... advanced one more kilometer deep into the defense of the nationalist [Ukrainian] battalions in the Volnovakha direction."

Konashenkov also claimed advances by Russian and separatist forces in the area of Stepovoye [Stepove] in the Luhansk region, and claimed without further evidence that 150 Ukrainian servicemembers had laid down their arms and surrendered in those operations.

Chernobyl taken: The Russian military also confirmed its airbone troops had taken control of the Chernobyl nuclear power plant. Ukrainian officials on Thursday confirmed that Russian forces had overtaken and seized control of the site of the world's worst nuclear disaster.

Konashenkov said background radiation in the area of the nuclear power plant was "normal." He claimed that the Chernobyl operation was organized so that "nationalist formations or other terrorist organizations will not be able to take advantage of the current situation in the country to organize a nuclear provocation."

Sanctions expected: The Russian government was expecting US and NATO allies to retaliate against the invasion of Ukraine with sanctions and says it will retaliate, Kremlin spokesman Dmitry Peskov said on Friday.

“We were expecting it,” Peskov said. “Of course, responses will follow. The law of reciprocity will operate here.”

The spokesman for the Kremlin also said he expects diplomatic relations with the global community to be fully restored, once there is widespread understanding of Russia’s motives.

“As soon as there is an understanding that this operation was necessary, an understanding of the inevitability of firm decisive actions on the part of Russia to ensure its security, one way or another, a period of normalization will come,” he said.

Former Ukrainian President Petro Poroshenko — armed and surrounded by defense forces — spoke with CNN this morning from the streets of Kyiv, saying that Ukrainians are ready to defend their country.

Poroshenko said his battalion is about two to three kilometers (about 1.5 miles) from the fighting between Russian and Ukrainian soldiers.

He said Ukraine needs the West's assistance, including sanctions, kicking Russia out of SWIFT — a high security messaging network that connects thousands of financial institutions around the world — and blocking Russian planes and ships in EU and NATO ports.

"This is important for us that we feel we are not alone, that you are together with us," he said.

"No matter how many soldiers he kills, how many missiles he has, how many nuclear weapons he has, we Ukrainian[s] are free people with a great European future," he said. 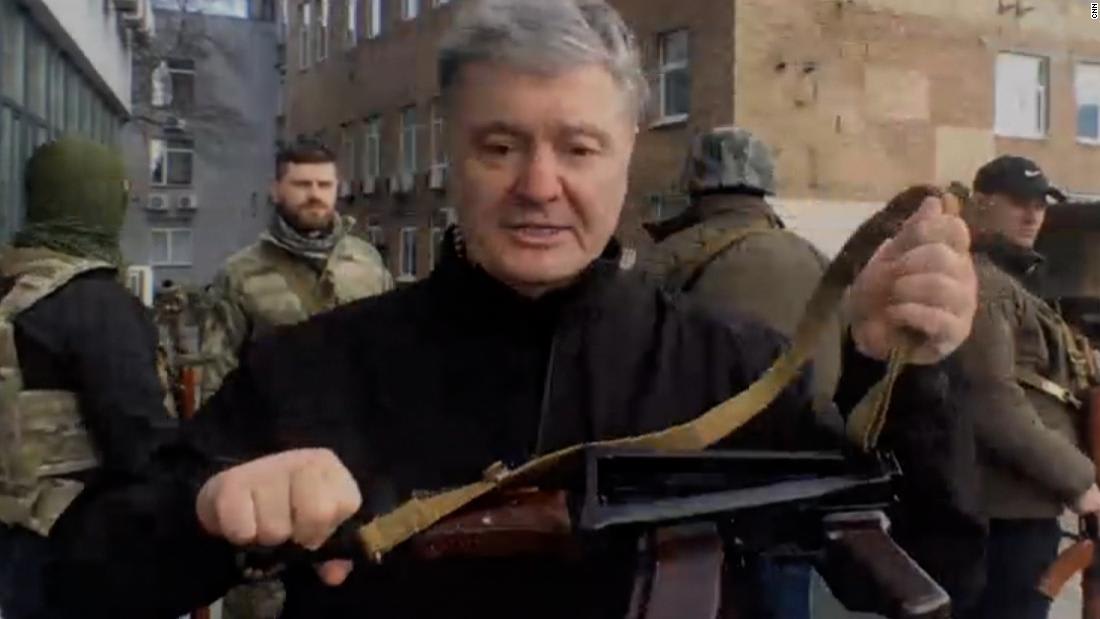 Speaking in Russian, Zelensky said: "I would like to address the President of the Russian Federation once again. There is fighting all over Ukraine now. Let’s sit down at the negotiation table to stop the people’s deaths."

Zelensky returned to the theme of international sanctions against Russia, which he wants to be much tougher.

Europe has enough strength to stop this aggression. What to expect from European countries -- the abolition of visas for Russians, disconnection from SWIFT, complete isolation of Russia, the withdrawal of ambassadors, oil embargo, closing the airspace - all this must be on the table today," he said.

Zelensky also made a direct appeal to the people of Europe.

"Go out, go out on the squares. Demand the end of this war. It is your right. When bombs fall in Kyiv, this is happening in Europe and not just in Ukraine. When missiles kill our people it is killing of all, all Europeans."

"Call your governments for Ukraine to receive more, more financial and military assistance. because this help is the help for you, for Europe."

"This is not just Russia's invasion of Ukraine. This is the beginning of the war in Europe," he said.

Putin said the US and NATO have “long ignored Russia's reasonable security concerns and repeatedly reneged on their commitments,” and their “continuous advance of military deployment eastward” has “challenged Russia's strategic bottom line,” CCTV reported.

Xi said that China "decides its position based on the merits of the Ukraine issue itself” and that China supports Russia and Ukraine resolving their issue through negotiation, the report added.

It also said "China is willing to work with all parties in the international community to advocate a common, comprehensive, cooperative and sustainable security concept."

Many Kyiv residents have fled their homes as the Russian army appears to be closing in on the Ukrainian capital.

Maryna, who lives in the city, has been sheltering in a subway station since Thursday.

"There are a lot of families with kids and animals here. We are not that far from [the district of] Obolon, where sabotage and reconnaissance forces recently landed. That's why I'm here," she told CNN in a message.

Maryna -- who brought her cat Hermes to the shelter with her -- marveled at how calm everyone there was. She said there was enough food and water for everyone and people were in good spirits.

"Children are playing ball, someone is sleeping, someone is reading the news. No panic. I rarely see such kind-hearted people that Ukrainians turn into in the face of danger," she said.

Formula One announced on Friday it will not race in Russia this year, after the country launched an invasion of Ukraine.

The Russian Grand Prix, which joined the calendar in 2014, was scheduled for September 25 at Sochi's Olympic Park, but F1 organizers said it was "impossible" to hold the race in the "current circumstances."

The UN is "gravely concerned" about the situation in Ukraine, and is receiving increasing reports of civilian casualties, the spokesperson for the UN High Commissioner for Human Rights Ravina Shamdasani said Friday.

"Civilians are terrified of further escalation, with many attempting to flee their homes and others taking shelter where possible," Shamdasani said, adding that "the military action by the Russian Federation clearly violates international law. It puts at risk countless lives and it must be immediately halted."

The High Commissioner, she said, has stressed that "states that fail to take all reasonable measures to settle their international disputes by peaceful means fall short of complying with their obligation to protect the right to life.”

The UN Human Rights office said it is also "disturbed by the multiple arbitrary arrests of demonstrators in Russia who were protesting against war yesterday. We understand more than 1,800 protesters were arrested. It is unclear whether some have now been released," Shamdasani said.

She added that detaining individuals for exercising their rights to freedom of expression or of peaceful assembly constitutes an arbitrary deprivation of liberty and called for the protesters' immediate release.

Some background: Ukraine has already seen thousands of casualties from the long-running conflict with Russia. War broke out in 2014 after Russian-backed rebels seized government buildings in towns and cities across eastern Ukraine. More than 14,000 people have died in the conflict in Donbas since 2014. Ukraine says 1.5 million people have been forced to flee their homes, with most staying in the areas of Donbas that remain under Ukrainian control and about 200,000 resettling in the wider Kyiv region.

Russian Foreign Minister Sergey Lavrov has said that “nobody is going to attack the people of Ukraine,” despite the continuation of strikes by Russian forces on Friday, telling CNN that there will be “no strikes on civilian infrastructure.”

“I will stress: read what Putin said. No strikes on civilian infrastructure, no strikes on the personnel of the Ukrainian army, on their dormitories, or other places not connected to the military facilities. The statistics that we have confirm this,” Lavrov said.

“Nobody is going to somehow degrade the Ukrainian Armed Forces. We are talking about preventing Neo-Nazis and those promoting genocide from ruling this country,” he continued.

“The current regime in Kyiv is under two external control mechanisms. First, the West and the US. And second, neo-Nazis,” he said, repeating baseless claims that have been repeatedly rejected by Ukrainian President Volodymyr Zelensky.

A Russian military airfield near the Ukrainian border has been struck by at least one missile, according to geolocated social media video and images.

It's unclear who carried out the attack: neither the Ukrainian nor Russian governments have commented.

The videos appears to show a long-range missile hitting the airfield and several fires in the runway, which is in Millerovo, Russia, about 10 miles from the Ukraine border.

Komsomolskaya Pravda, a local newspaper, reported that a Ukrainian Tochka-U missile hit the military facility on Friday 25, citing a source in the law enforcement agencies of the region.

Another media outlet, the Rostov Gazeta, reported Millerovo was attacked by armed formations of the Ukrainian army. It also reported an unspecified number of wounded.

Millerovo is part of the Southern Military District and it houses the 31st guards fighter aviation regiment which has two squadrons of Su-30SM.

German lawmakers criticized Chancellor Olaf Scholz for not cutting Russia off from the vital high-security payment network, SWIFT, in the European Union’s latest round of sanctions on Moscow.

German Parliament member Norbert Röttgen, from the Christian Democrats party, said on Twitter that cutting Russia from SWIFT is the ''sharpest sword'' for sanctions, adding that: ''The SWIFT exclusion of Russia must not fail now because of Germany!''

This sentiment was shared with other German politicians. ''Russia must now be cut from SWIFT!'' German Green MEP Jan Philipp Albrecht wrote on Twitter Thursday, adding ''If Germany prevents this key sanction, the way will be prepared for Putin to expand his war in #Europe.''

Germany is Russia's biggest gas customer and has tried to keep the Nord Stream 2 pipeline out of global politics. On Tuesday, the German Chancellor Olaf Scholz halted the Nord Stream 2 approval process over the Ukraine crisis.

Thousands protest: Meanwhile, thousands of people took to the streets of Berlin on Thursday night in a show of support for Ukraine, with many carrying Ukrainian flags, CNN's team in the city reports.

Police said that around 2,500 people -- among them some Ukrainian expatriates living in Germany -- gathered at the Brandenburg Gate, which was lit in Ukraine's national colors for a second night in a row.

Around 150 protesters also gathered outside the Russian Embassy, police said.

Crowds also gathered in other German cities including Potsdam, Leipzig and Munich in a show of support as Moscow began a full-scale invasion of Ukraine Thursday.