Ukrainian armed forces have reported heavy fighting around Vasylkiv, a city located about 18 miles south of the country's capital, Kyiv.

"Heavy fighting is currently underway in the town of Vasylkiv in the Kyiv region, where the occupiers are trying to land a landing party," the armed forces said.

Russian forces are also advancing toward Kyiv from both the north and the east.

A series of explosions were just heard on the outskirts of Ukraine's capital city of Kyiv.

It's slightly past 2 a.m. local time in Ukraine right now.

The exact nature and location of the detonations are not yet clear.

The officials — members of Russia’s National Security Council — include Russia's Defense Minister Sergei Shoigu and Chief of General Staff of the Russian Armed Forces Valery Gerasimov, according to a US Treasury Department statement.

“Treasury has previously designated eleven members of the Russian Security Council and will continue to impose costs on the ruling elite as Russia prosecutes this brutal war of choice,” the statement said.

The White House had announced earlier Friday plans to impose sanctions on Putin, making him the highest-profile target in the effort to impose costs on the Russian economy and Putin’s inner circle.

Ukrainian President Volodymyr Zelensky gave a late-night message on Friday outlining the situation in his country as Russian forces continue to advance on the capital city of Kyiv.

If you're just reading in now, here are the key lines from the video message:

Amid the invasion from Russia, Ukrainians are seeking refuge in neighboring nations. Moldova, Belarus and Georgia don't require visas for Ukrainian passport holders, and many other countries in the region don't require a visa for at least 30 days.

On the map below, increased road traffic is represented by orange circles. 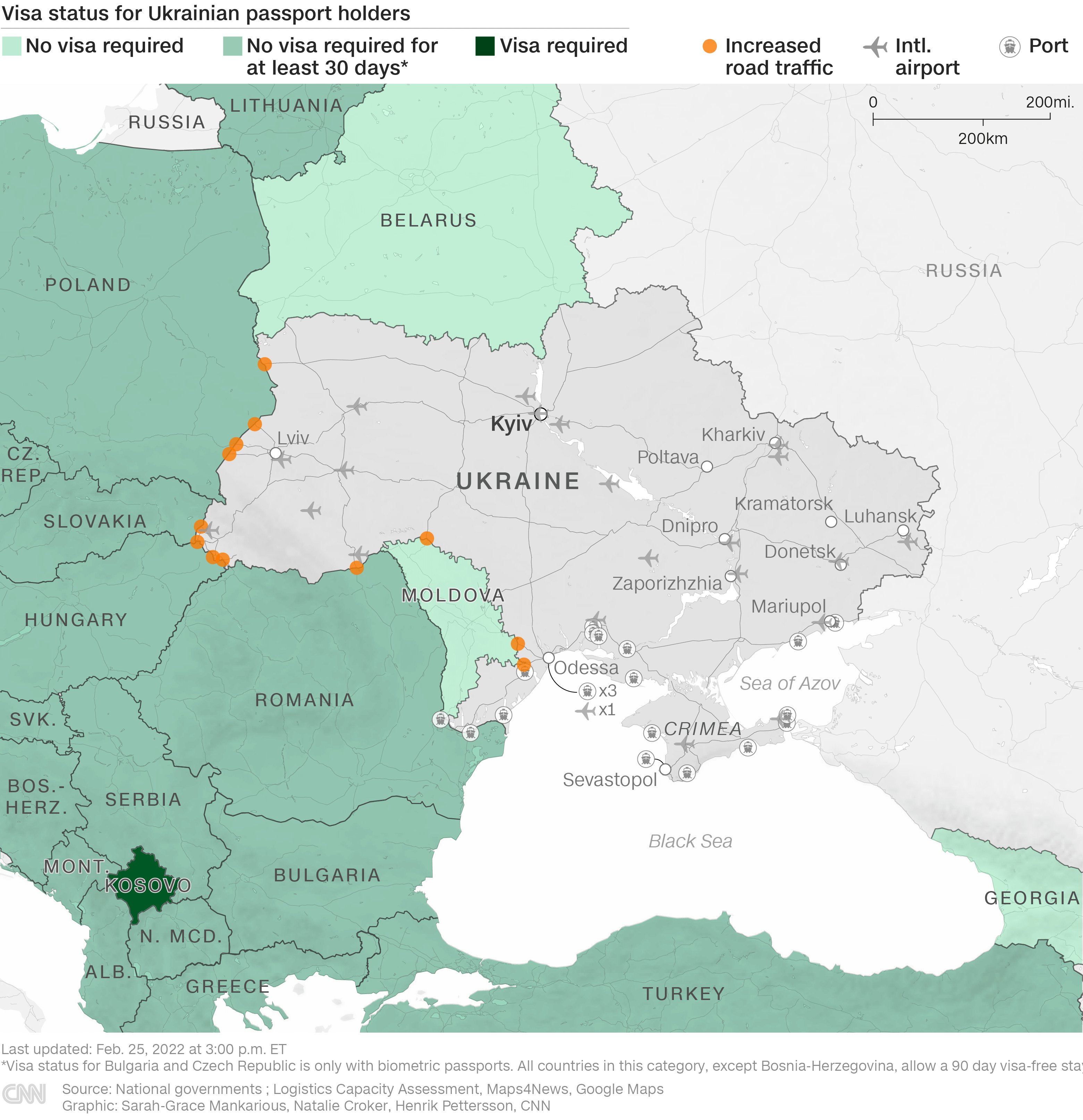 Addressing the people of Russia while speaking Russian, Zelensky said, "There is nothing that could possibly explain why the kindergartens and civilian infrastructure are being shelled. "

He continued: "What kind of war is this against the Ukrainian children? Who are they? Are they also neo-Nazis? Or are they NATO soldiers that imposed a threat to Russia?"

Zelensky's remarks come after Russian President Vladimir Putin made baseless claims about Ukrainians to his security council on Friday. Putin frequently repeats the baseless and inaccurate claim that the democratically elected Ukrainian government is a "Nazi" or "fascist" regime.

Zelensky went on to say that "many" cities are under attack and pleaded with Ukrainian citizens "to be very careful."

"Please help each other, especially the elderly, the lonely, those who need your support," he said. "In case of any danger, please go to the shelters."

Celebrity chef and global humanitarian José Andrés has responded to the Russian invasion in Ukraine, pledging to provide meals along the country's western border through his organization World Central Kitchen.

"We must come together as a force for good! @WCKitchen is on Poland border delivering meals tonight."

In 2021, Andrés was a recipient of Jeff Bezos' Courage and Civility Award, an honor which came with $100 million.

Now Andrés has earmarked some of those funds for Ukraine, saying "In addition to your donations…I am committing support from the Bezos award to Ukraine."

"Our president believes Israel is the only democratic state that has great relations with both Russia and Ukraine and that could be used in order to facilitate those negotiations," Yevgen Korniychuk told CNN Friday evening.

Korniychuk said Jerusalem is preferable to Minsk where previous talks took place because Belarus is a close ally of Russia, and Ukraine does not "believe in the legitimacy" of Belarus' current leader Alexander Lukashenko.

"(We) definitely need to change the venue and we believe Jerusalem could be a good place for that," Korniychuk said.

As for the Israeli response to the request, Korniychuk said they "neither agree or deny it, they're considering it, and that's a positive sign."

A spokesperson for Bennett would not comment further beyond the official read out issued about the call, which made no mention of the mediation request.

The request was first reported by Israeli channel Kan 11.

Ukrainian President Volodymyr Zelensky says Russian forces are closing in on Kyiv, advancing on the capital from the north and the east.

"Our main goal is to finish this slaughter. The enemy losses are very grave — today there were hundreds of killed soldiers who crossed our border and came on our land."

Zelensky added, "unfortunately, we also suffer losses. Ukrainians resist the Russian aggression heroically. This aggression cannot be justified, so the occupiers have to come up with more absurd accusations to say at least something."

After taking an airbase just north of the city on Thursday, Russian forces are now close to the capital of Kyiv. They are also advancing along two routes from the north and at least one from the east.