In his latest video message on Saturday, Ukrainian President Volodymyr Zelensky told Ukrainians: "We have withstood and successfully repelled enemy attacks. Fighting continues in different cities and regions of our country."

Zelensky said the capital Kyiv and key towns around it were still under the control of the army.

We have ruined their plans. they have no advantage over us."

He said Russia had hit residential areas using rockets, adding: "The destruction by missiles and artillery of residential buildings is the ultimate argument for the world to be by our side in stopping the occupiers’ invasion."

Zelensky said Ukraine now had "almost full support of the members of the EU to exclude Russia from SWIFT" -- the international payments system that has been at the heart of a debate about sanctions against Russia. "I hope that Germany and Hungary will have enough courage to support this decision," he said.

He also said Ukraine has earned its membership in the European Union. "Now the decisive moment has come to end the many years of discussions" about Ukraine joining the bloc.

He again appealed to Ukrainians to resist the Russian invasion.

Each Ukrainian should keep one thing in mind: if you can stop and destroy the occupiers -- do it. Everyone who can come back to Ukraine -- come back to defend Ukraine."

He also appealed to volunteers from abroad. "All the friends who want to join us -- please come, we will give you weapons."

Switching to Russian, Zelensky then spoke again directly to Russians.

He thanked Dmitry Muratov, the head of independent Russian newspaper Novaya Gazeta, and others in Russia for their anti-war activism, and said: "Russians are being sent to die in the thousands and to kill."

The Russian-flagged "Baltic Leader" -- a commercial vessel carrying cars -- was stopped by French officials in the Channel and re-routed to the port of Boulogne, the spokesperson said.

Customs officials have begun inspections of the vessel, which is suspected of belonging to a company targeted by European sanctions against Russia over its invasion of Ukraine, the spokesperson said. An investigation by French customs has been opened.

Russian communications regulator Roskomnadzor has warned 10 local news outlets that it will restrict access to their publications unless they stop spreading what it calls false information, including references to the military operation in Ukraine as an "attack, invasion or declaration of war.”

In letters sent letters to these outlets, the watchdog said it complained about allegedly “false information” they published on the shelling of Ukrainian cities and the death of civilians caused by the Russian armed forces.

Novaya Gazeta editor Dmitry Muratov won the Nobel Peace prize in 2021. Some of these outlets have been designated by Russian authorities as foreign agents.

“Unless the above inaccurate information is removed, access to these sources will be restricted,” the watchdog said in a statement on Saturday, announcing an investigation into the media outlets.

“Roskomnadzor strongly recommends that the editorial offices of the media, prior to the publication (broadcast) of materials in accordance with Article 49 of the Mass Media Law, establish their authenticity,” the watchdog said. “We emphasize that accurate and verified information is available from official Russian information sources.”

Several security checkpoints were set up around Lviv in western Ukraine on Saturday, CNN teams on the ground have witnessed.

The city's mayor confirmed the checkpoints in a statement on Saturday.

"Checkpoints are being set up in Lviv and the region. They will be placed on all entrances and exits to the Lviv Territorial community for checking all people entering the territory," Andriy Sadovyi said, according to the statement.

"Checkpoints are placed in cooperation with police and territorial defense forces to ensure the safety of Lviv," the statement added.

Some of those checkpoints are still being established on the main roads leading to the city.

Separately, sirens went off multiple times in the city as local authorities in Lviv continue urging residents to take cover and go to nearby bomb shelters.

Lviv is the city to which some diplomats relocated from Kyiv, the capital, earlier this month.

The Russian Defense Ministry has not reported a single combat casualty from the military conflict in Ukraine, a CNN review of their news releases shows.

In its latest update to the media on Saturday, the Russian Ministry of Defense only lists losses of military equipment on the Ukrainian side, as a result of what it calls a “special military operation.” On Friday, Russian Ministry of Defense spokesman Major General Igor Konashenkov said there were no casualties on the Russian side, in a statement regarding an operation to take an airfield on the outskirts of Kyiv.

On the opposing side, Ukrainian President Volodymyr Zelensky has claimed that the country’s forces have killed “hundreds” of Russian soldiers, without providing an exact figure. Ukrainian officials have acknowledged casualties on their side.

CNN has been unable to independently verify these figures, but videos have surfaced on social media purporting to be showing Russian casualties.

The United Nations' Deputy High Commissioner for Refugees, Kelly Clements, told CNN that up to 4 million people could try to cross borders as the crisis in Ukraine continues.

Speaking to CNN's Michael Holmes on Saturday morning from the Swiss capital Geneva, Clements said people were having to make "life or death decisions," with 850,000 people internally displaced while over 120,000 people had fled Ukraine.

We've had a humanitarian crisis in the country for the last eight years and it's just become a whole lot worse. In addition to those 850,000 internally displaced primarily in the east, we know that over 100,000 people are already on the move."

Clements said there were queues at a number of border crossings, and many Ukrainians were monitoring the situation. She added that "many more" would follow the "large number" of refugees who have already crossed into neighboring Moldova.

"We now see over 120,000 people that have gone to all of the neighboring countries. And I have to say, the reception that they are receiving from local communities, from local authorities, is tremendous," Clements said. "But it's a dynamic situation, we're really quite devastated obviously with what's to come, and we would say that up to 4 million people could actually cross borders, if things continue to deteriorate, which they have until now."

The latest estimate of displaced people is a huge increase from numbers cited by United Nations High Commissioner for Refugees Filippo Grandi on Friday, when he said more than 50,000 people had fled Ukraine in the previous 48 hours.

The Deputy High Commissioner for Refugees called for the protection of civilians and civilian infrastructure, saying, "international humanitarian law demands it" and people's lives were "quite literally being taken in this conflict."

"So far those borders are open, and this is something that's tremendously important in a dynamic situation like this," Clements added.

Ukrainian President Volodymyr Zelensky has turned down an offer from the United States of evacuation from the capital city Kyiv, the Ukraine embassy in Britain said Saturday on Twitter.

According to the embassy, Zelensky told the US: "The fight is here; I need ammunition, not a ride.

"Ukrainians are proud of their President," the tweet adds.

In a video posted Saturday morning on Twitter, Zelensky said, "we are not putting down arms."

It echoed Zelensky's own words that his intelligence said he has become a key target.

Zelensky said Thursday that "according to our information, the enemy marked me as target №1, my family - as target №2. They want to destroy Ukraine politically by destroying the head of state. We have information that enemy sabotage groups have entered Kyiv."

The sound of shelling impacts hit around the city of Kherson, Ukraine, north of the Crimean peninsula, from 8 a.m.

By 11 a.m. the bridge -- which connects Russian-held areas to Ukraine -- was blanketed in smoke from the grass around it that had caught fire.

Shelling continued back and forth, and a CNN team could see through the smoke apparent armored vehicles on the bridge moving towards the Ukrainian side. CNN was unable to confirm who they belong to.

Battle over strategic link: CNN’s Nick Paton Walsh has been reporting from the area.

On arriving to the southern Ukrainian city on Thursday night, he said Russian tanks were in the streets, with no rest overnight. Jets were flying low overhead, terrifying residents.

By Friday, Ukrainian forces had reclaimed the key crossing into the country but not without cost. One Ukrainian soldier told CNN the Russians were “not far away.” Civilians were seen picking through the wreckage on the bridge for ammunition, bodies of soldiers lying nearby.

“It shows you how many people are involved on a local level,” Paton Walsh reports. “They're stopping everywhere to pick up whatever they can.”

Friday afternoon brought the noise of more rockets landing in the streets and by dusk it appeared the balance of power had changed once again. Shells landed around Ukrainian positions and seemingly near houses. It was followed by the sound of an attack helicopter. All acute violence that seemed to indicate the bridge had changed hands again and moments later local officials told CNN Kherson's defenses had fallen.

On Friday, Russia's foreign minister Sergey Lavrov sought to reassure the world about civilian casualties a day after Moscow had ordered an invasion of Ukraine.

"Nobody is going to attack the people of Ukraine," he said during a heated press conference, telling CNN that there were "no strikes on civilian infrastructure."

However, reports about apartment buildings and kindergartens being shelled, civilians being killed, and rockets being found in residential streets have been trickling in since the beginning of the offensive.

Social media videos, photos and satellite images analyzed and geolocated by CNN confirm that on several occasions densely populated areas have been hit by Russian forces. CNN is reaching out to the Russian government for comment. 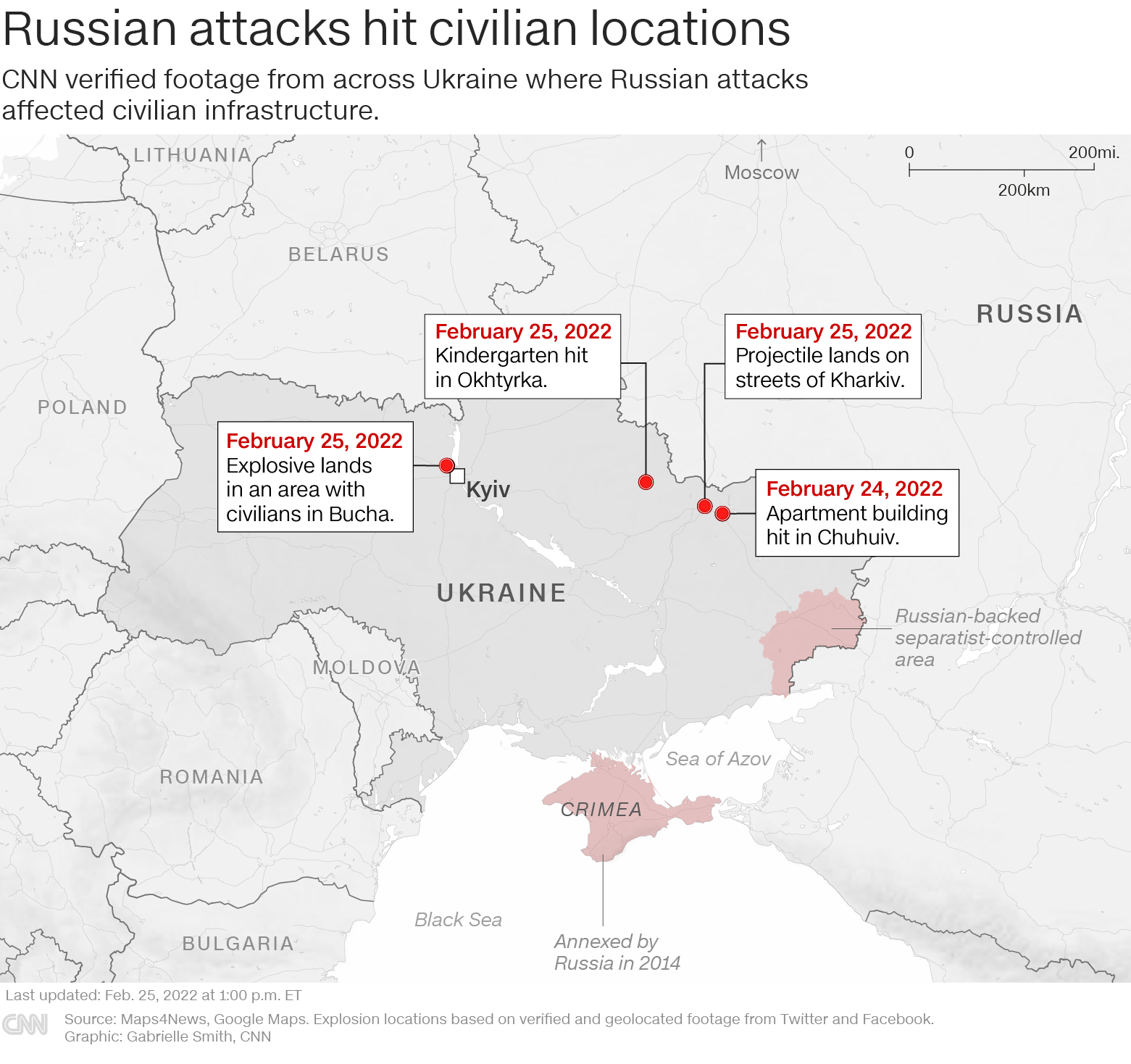 Amnesty International, in a press release on Friday, accused Russian forces of "indiscriminate attacks on civilian areas and strikes on protected objects such as hospitals," citing three examples, including an attack on Thursday near a hospital building in Vuhledar, in the eastern Donetsk region. That attack killed four civilians and wounded 10 more, Amnesty reported. 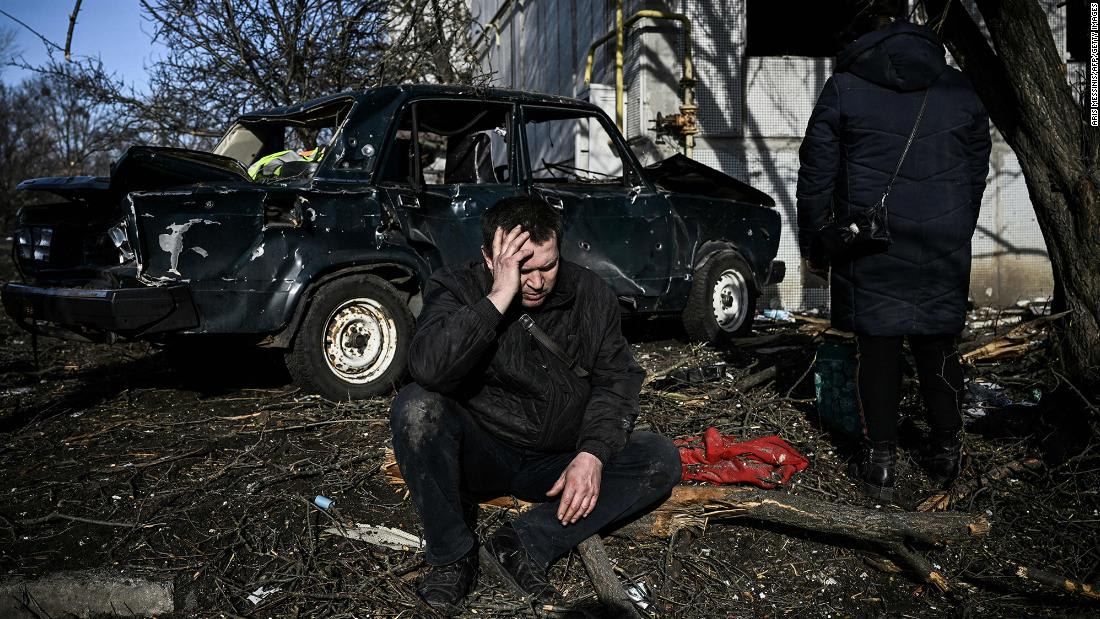